How can there be a "final edition" of a morning paper, in the morning?

A US television episode from 1957 has the following scene, set in a hotel restaurant in what is clearly the morning, as he is eating breakfast and it looks brightly lit:

Man at table: "Is that the final edition?"

How can a "morning paper" be out in a "final edition" when the time is clearly early in the day?

Do I not understand what a "morning paper" is? I assume that the people who make such a newspaper must be working during the night and sleep/be at home during the day, since otherwise they can't very well produce a morning paper in time, but they are talking about the "final edition" already. How is that possible?

A morning paper supposedly comes out in time for... the morning. How quickly do they make updates if there is at least two editions already published and distributed by the time the man eats breakfast and is given the "final edition" of the alleged "morning paper"?

Is the first edition published extremely early, before most people are awake? Is that the answer?

Reset to default
9
Want to improve this post? Add citations from reputable sources by editing the post. Posts with unsourced content may be edited or deleted.

Yes. Earlier editions were run for home delivery (often arriving at homes around 5AM) and later editions for newsstands. For East Coast papers, there would be major differences between the two in coverage of evening sports events (especially games played in California). I was especially aware of this growing up in the suburbs and attending high school in the city. In high school I wouldn't bother reading the sports page at home if the baseball team was out west for the week...I'd look at the paper in the school library which was much more likely to have the score and not just say "late game". Here's a somewhat comical discussion of the whole business regarding the meaning of "final edition" in, of all places, the pages of a morning paper.

Due to the timing of morning papers, there usually was not a difference in the coverage of domestic news, since even the earliest print runs wouldn't start until 11PM or so, but there could be major differences in the coverage of foreign news (from countries in other time zones). The most common differences were not for "stop the press" types of events (those happened but were rare); rather they were events that could be perfectly well anticipated and thus were planned to be included in the final edition. In addition to baseball games, this could inter alia include chess matches (e.g., Korchnoi v Karpov, Kasparov v Karpov) or coverage of scheduled speeches.

Print news was a serious business back then. When I was a boy, one of the few non-government ships that needed the drawbridges near Washington opened for it was the one bringing supplies of paper for the Washington Post to be printed on.

The first guess might of course be that a newspaper announced to stop circulation, perhaps only of its 'morning edition', or the entire outfit is about to close down. Thus final edition, ever.

A more likely explanation however is that compared to a bulldog edition, the final edition of a daily or morning paper is really the latest edition of that version for the day:

Afternoon or evening papers, once common but now scarce, are aimed more at commuters and office workers. In practice (though this may vary according to country), a morning newspaper is available in early editions from before midnight on the night before its cover date, further editions being printed and distributed during the night. The later editions can include breaking news which was first revealed that day, after the morning edition was already printed. Previews of tomorrow's newspapers are often a feature of late night news programs, such as Newsnight in the United Kingdom.

The latest evening paper to try a morning edition is The Evening Bulletin in Philadelphia. It formerly came out around 8 A.M., but an early edition now goes to press in the middle of the night and hits key downtown newsstands by 6:30 or 7 A.M. and somewhat later in the outlying areas.

Meaning the content from the first to the final run can change in any unpredictable way, updated is what we would call that today.

That is in contrast to what is explained in the related stop-press article, as that describes an unforeseen and unintended change of the production run, whereas with a 'final edition' these breaks and changes are intentional.

An example for this practice can be illustrated with this final edition from December 7, 1941, which was quite fast, but still differs markedly from what most papers wrote on December 8: 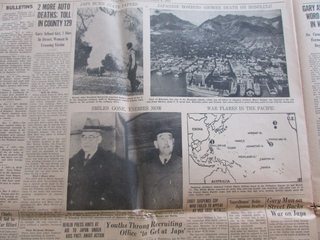 As such, this is another ephemeral non-Chekhov-gun Hitchcock uses. Not much clues from the episode itself. Except this bit:

In the show watched the dialogue in context reads

The morning paper, sir. Is that the final edition? Yes, sir. […]
You going somewhere, Tommy? Have been. Yes, my dear boy, I have been. You're being pretty cagey with an old pal.
Well, you can read all about it in the morning paper.
Listen.
"Dateline, Chicago. "Jerome Stanton, chemical engineer, "was found murdered in his home last night. "The police have already staked out a suspect on a clue furnished by Mrs. Stanton. "When asked if she knew who might have had a motive for the crime, "she replied that her former husband, Tommy Greer, "

So it's likely a very current very local event that happened during the night when first edition might/will be already be printed without having that news, necessitating a later run of the regular morning edition to be able to read about it in print.

10
How common was drug abuse and related deaths in the USA during the conservative 1950s?
8
How did Islam spread before the invention of the printing press?
14
How many pens were used by MacArthur to end the final chapter of World War II and where are they now?
8
How were maps drawn and printed in the late 19th-early 20th centuries?
1
Did families heading west ever settle along the Oregon Trail (instead of at the final destination)?
5
How were precise hand drawn illustrations copied between the 16th and 20th century in Europe?
3
How could someone avoid US military service in the early 1950's?
3
Why are there multiple versions of the color plate "Excavation of Olive Mount"?