Who was the sovereign of the lowest title? [closed]

It is known that there existed sovereign counts (Armagnac, count at God will). But had you read about sovereign viscounts or barons? Or some boyar/boyarin (~= baron) in Eastern Europe?

The same about some Viking titles. Eric the Red was the sovereign of Greenland, being an earl, for example. Were anywhere some sovereign bonds?

On the East, emirs and khans had sovereignty often, and I hadn't heard about sovereign beks or noyons?

Again: What was the lowest known title of an independent ruler in Western European, Eastern European, Muslim or Mongol systems. AFAIK, the lowest titles that happened to be sovereign are: count, knjaz(prince), emir, khan. Can you lower one or more of these positions?

Another system with its own lowest possible independent ruler will be appreciated, too.

Edit.
As a sovereign/idependent ruler, I propose to consider one who:

Point 2 is not up to the medieval understanding of sovereignty, but I voluntarily weakened the principle in this point for not to overlook any early parlamentarian states.

Beware wikipedia: in https://en.wikipedia.org/wiki/Mongolian_nobility it says that noyon was the title just below the Khagan, but no, Batu was just below Khagan, and he was khan - that was the title between khagan and noyon.

The ranking of German nobility place Burgrave equivalent to the English Viscount. In the Holy Roman Empire the holders of this title were Imperial Princes, and thus sovereign.

There were four hereditary burgraviates ranking as principalities within the Holy Roman Empire, those of Antwerp, Magdeburg, Freidburg, and Nuremberg. The Burgrave of Meissen was hereditary but not entitled to the privileges of an Imperial Prince in the H.R.E.

The four unique titles of Rhinegrave, Waldgrave, Raugrave, and Altgrave were equivalent in prestige and privilege to Burgrave, but acquired unique titles prior to the creation of the more generic Burgrave title.

Here are the rankings of the nobility and sovereigns of the Holy Roman Empire. 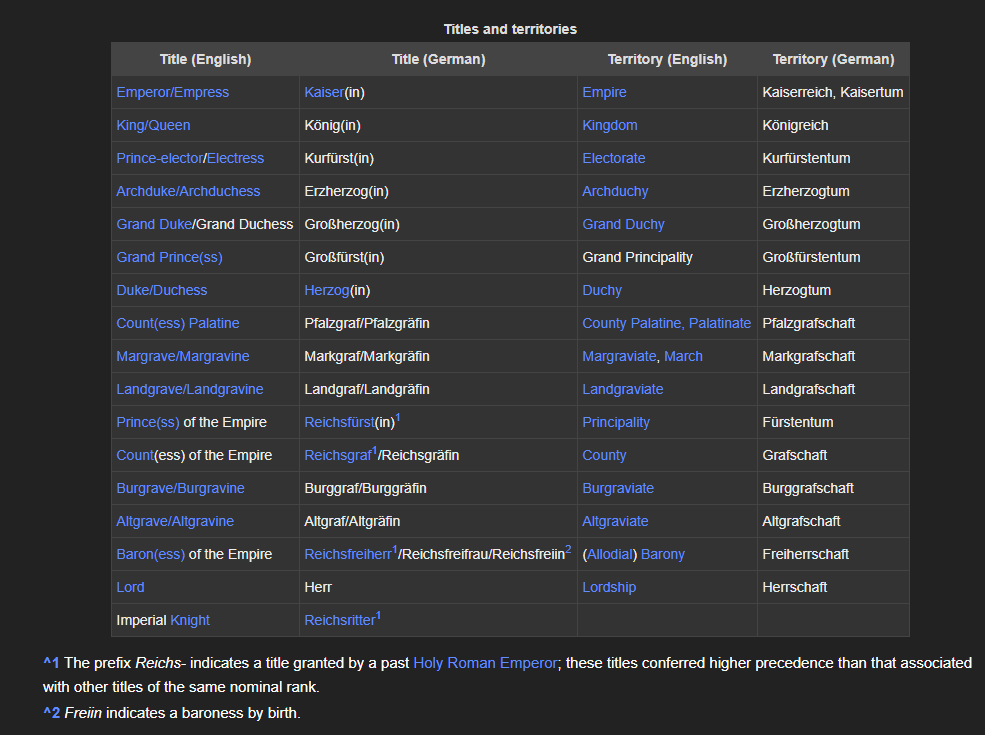 Note that there are many more then we are accustomed to in the English and British peerages. The main equivalencies, in descending order, are:

Not the answer you're looking for? Browse other questions tagged feudalism titles or ask your own question.

8
Jean III de Grailly, captal de Buch's strange title
8
What happens if a vassal inherits not under the control of their sovereign?
8
What was the status of peasants who left to join the People's Crusade?
7
Why was "Caesar" borrowed for the imperial title in German rather than "Augustus"?
3
Did Catherine of Aragon use the title Princess of Wales before she was married to Prince Arthur?
23
Was the title "Prince of Wales" originally claimed for the English crown prince via a trick?
17
Why did Peter the Great change his daughters' title to Tsesarevna?