Why was there no "Atlantic Wall" equivalent on the Mediterranean coast of France?

During World War II, Germany built the Atlantic Wall, a series of fortifications covering the Atlantic coasts of France, the Low Countries, Norway, etc. But that effort didn't seem to extend to the south of France, that is, the Mediterranean coast. Why not?

Of note is the fact that the Atlantic Wall covered the coast of what had been "occupied" France (up to 1942), whereas the "unprotected south coast was part of (the former) Vichy France. Were there political reasons for not building a "Mediterranean Wall" in the south? Or was it the case that "Vichy" France was considered more defendable or less strategically important than "occupied" France?

If you try to defend everywhere well, nowhere will be well defended. You only have so many resources. Instead you concentrate defenses on the most likely points of attack, and hold back mobile reserves to counter-attack.

The Germans tried anyway and spread themselves very thin. The Atlantic "Wall" stretched across the whole coast of Norway, Denmark, Netherlands, Belgium, and the Atlantic coast of France covering thousands of miles of coastline adjacent to the British Isles. A shocking amount of German attention went to defending Norway.

Because it was so long, the Atlantic "Wall" was not a continuous line, but a series of fortifications covering major ports and expected landing sites, some quite impressive, but with no depth to the defenses. Likely landing beaches were fortified. To man the wall, Germany employed a mix of low quality troops, foreign volunteers, and prisoners of war pressed into service anchored with experienced troops and mobile reserves. Germany had to scrape together guns from all over its empire; the Atlantic Wall has been described as a European artillery museum.

But even they did prioritize according to where they expected the Allies to attack in force. A quick look at a map of Western Europe shows why they concentrated (if such a word can be used for a defensive line from the Arctic Circle to the French Atlantic coast) on these areas. 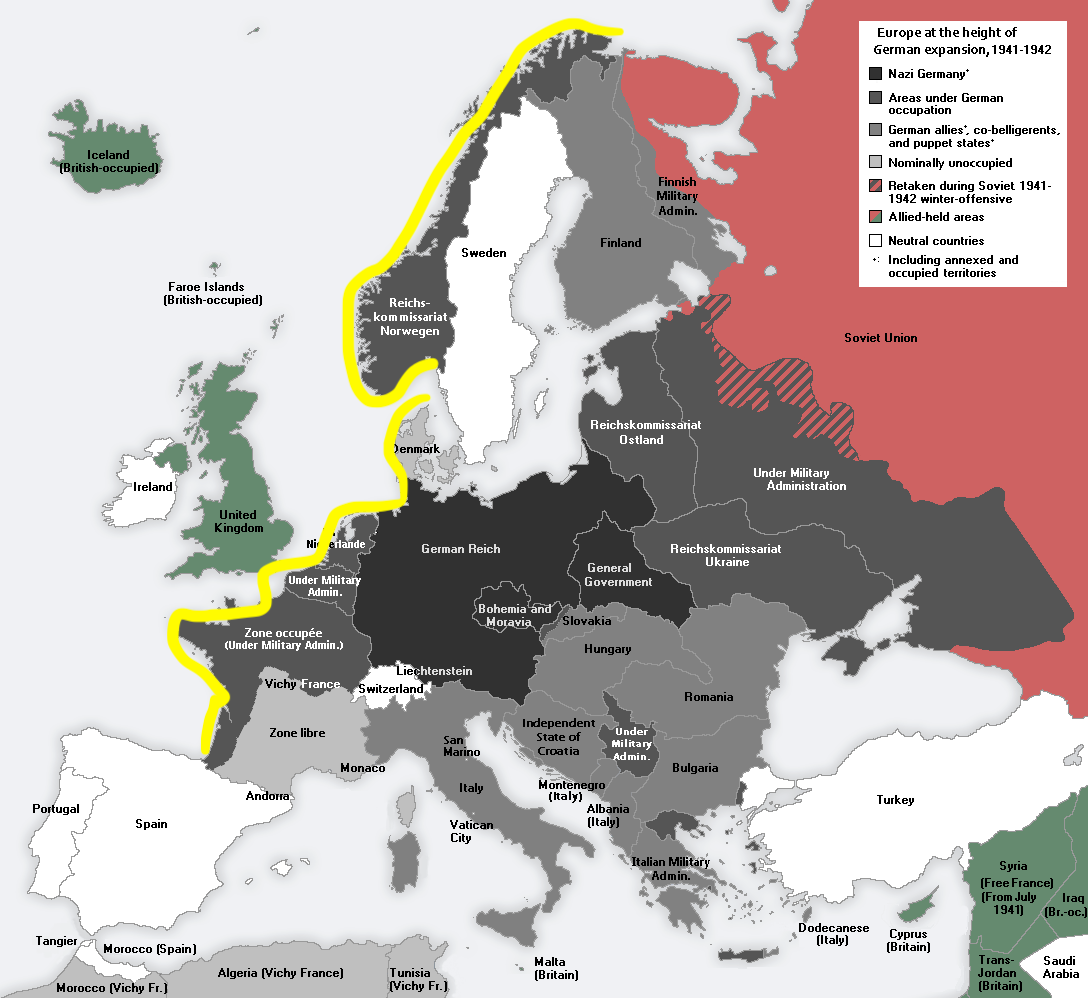 The "Atlantic Wall" was not a wall around France, but rather a fence around Britain.

Britain was the Allies' major point of supply and air power. Crossing the channel was the shortest route to attacking Germany, something so technically challenging as an invasion of Europe would have to use the shortest sea route. The Allies would want to minimize the time their transports were in open water, vulnerable and visible. A cross-channel invasion would have to come from Britain.

When the Atlantic Wall was ordered in March 1942, the Allies' only choice was Britain. It wasn't until November 1942 that North Africa was invaded and it would take until May 1943 for it to be cleared.

After the Allies took control of the Mediterranean in late 1943 it would be possible they could mount an invasion of the south of France, but it would be more difficult to amass the troops, supplies, aircraft, and air bases necessary in Italy or North Africa to mount and sustain a full invasion.

An invasion of southern France did not threaten Germany as acutely as elsewhere. Once ashore, the Allies would be 1500 km from Berlin. That isn't so bad compared Normandy's 1200 km, but the Germans expected an attack at Calais, the obvious point directly across the English Channel, just 900 km from Berlin. An invasion at Marseilles would give the Germans plenty of time to react and an extra 600 km of territory to fall back on.

A quick look at the terrain of Europe shows another reason why the Germans were less concerned about an invasion of southern France.

There is a highway from Bordeaux through the Low Countries across Northern Germany into Poland and all the way to the steppes of Russia which has been the traditional East-West invasion route for millennia. Of particular interest was the North German Plain. Its flat terrain and good highways allows rapid movement of mobile forces between the hearts of France and Germany. It has been exploited in every modern invasion.

In contrast the terrain from southern France is more restricted. Invasion forces would have to either be funneled between the Massif Central and the Alps through Valence, or take a long detour around the Massif. The choke-point would give the Germans a perfect defensive position and negate the Allies' superior numbers. The Allies were slogging through similar terrain in Italy and would not wish to repeat that.

Once clear of the choke-point, the Allies would continue to encounter rough terrain through Dijon. If they chose to go for Germany they would face yet more unfavorable terrain through Nancy, Metz, Frankfurt, and Lepzig. Or they could drive west away from Germany to take Paris and finally gain access to the North German Plain. 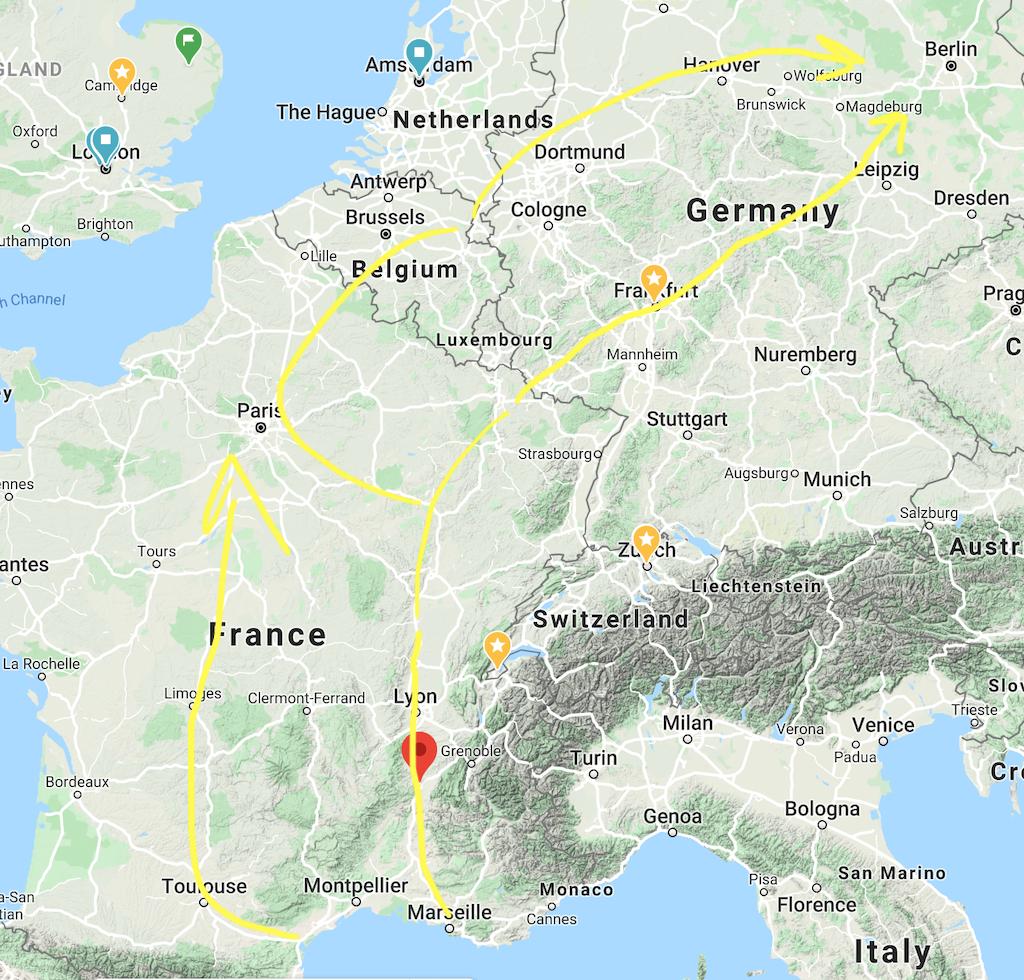 There were defenses on the coast of Vichy France. France had existing coastal defenses, particularly around the important ports of Toulon and Marseille. The Vichy government improved these defenses and after the German take over in November 1942 they continued their improvements.

Operation Vendetta attempted to fool the Germans into thinking the Allies were going to invade southern France earlier than they actually did to keep troops tied down there. The Germans didn't buy it, but they did keep troops defending the Mediterranean coast.

But by the time of Operation Dragoon, most of German Army Group G defending southern France had been stripped to fight on active fronts. Just 11 under-strength divisions were left, and one under-strength Panzer division for their mobile reserve, spread across southern France. Many of the divisions were "static", immobile in their defensive positions, and isolated. Others were reservists and Ostruppen of questionable quality.

The Germans simply could not be everywhere at once, but they tried.

As they stripped southern France, the Germans left 400,000 troops sitting in Norway the whole war waiting for an invasion that would never come. Why defend Norway and not Southern France?

Iron ore. Germany relied on Swedish iron ore which had to come through Norway. Germany invaded Norway because they thought the British were, and they weren't entirely wrong. And thanks to Operation Fortitude North the Germans remained convinced a counter-invasion would come. So 400,000 troops plus tanks, aircraft, and artillery sat in Norway waiting for an invasion that never came.

You can look up details on Operation Dragoon, the invasion in Provence in August 1944, seems to have had at least some defenses set up.

The 15th Infantry Regiment came ashore at Alpha Yellow Beach, finding it dotted with bathhouses and elaborate fortifications held by Polish “volunteers.” It took an hour to clear the beach.

I suspect that the UK, being much closer, was the reason most of the effort was in the Atlantic.

Vichy France existed until November 42. I suppose the Germans could not have built fortifications before that.

Italy (Sicily) was only invaded on July 43

Corsica was occupied by Italians or Germans until September 43. Sardinia was also liberated on Sept 43

As there were Axis territories that had to fall before a landing in Southern France, it makes sense that it got less priority in defensive measures, at least up to September 43 - after that, the Germans had less than an year.

And even if the Germans were fortifying Southern France on early 43, telling this in propaganda could imply that they believed Italy would fall, at least up to the end of 43. It would be bad propaganda

Even in 44, it is clear that Northern France had much higher priority: it was closer to both England and Germany, and the American forces were concentrating in England. German propaganda focused on the larger, more impressive, fortifications protecting the route of the expected major invasion. And the Allied press also focused on the major invasion.

So it makes sense that we do not know much about the existing fortifications.

Another point: the Southern invasion required diverting forces intended to Italy, and an extra logistical effort on concentrating landing ships. It was not an easy decision, and it was scrapped during some stages of the Allied planning. It would be interesting to know when (or if) the Germans started to expect it. E.g. up to a point in the war, Churchill wanted to advance in Italy up to the Balkans/Austria, which would be incompatible with the southern invasion.

Not the answer you're looking for? Browse other questions tagged world-war-two nazi-germany france or ask your own question.

135
Why was France granted an equal status among victors of World War II?
17
What is the equivalent in France of the "Victorian era"?
41
Why aren't there major cities on the Atlantic coast of France?
5
Why didn't the English overrun France when the king was their captive?
4
In regards to Vichy vs Free France, what was the status of Saint Martin and Saint Barthelemy?
3
Was there risk of revolution in France at end of World War I?
22
Was there a Japanese equivalent of the Gestapo during WW2