Did Muslim women in colonial India before 1939 have to become Christian to divorce?

Question:
How prevalent was it for Muslim women to convert to get out of their marriages in colonial India before 1939?

Conversion to Christianity was not the only option women had. The purpose of the 1939 Act was to “consolidate and clarify” provisions already available to Muslim women. Contemporary writer Sheikh Abdul Haq pointed out the use of conversion to obtain a divorce had two issues. First, that it was a misinterpretation of Muslim law by non-Muslim courts. Second, that it was the result of women having almost no other options. 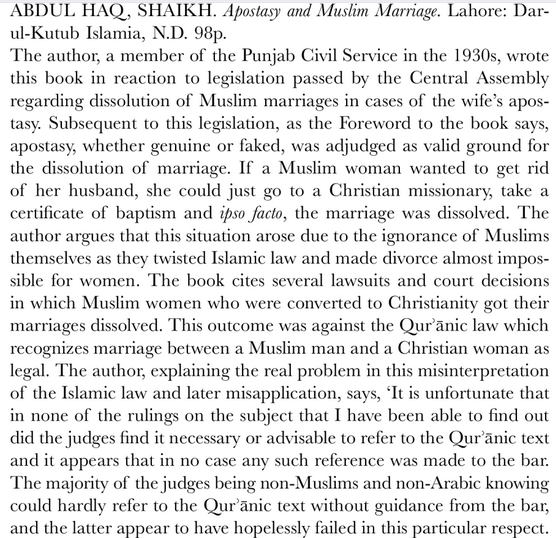 He goes on to argue that the traditional Islamic law should be restored, which would grant women more leverage.

‘Tafwiz’ refers to “talaq-i-tafwiz” which is the right of a Muslim woman to dissolve her marriage on her husband's behalf. This option for divorce was delegated to a wife if her husband chose to do so.

From Talaq-i-Tafwid: The Muslim Woman’s Contractual Access to Divorce: An Information Kit

This publication primarily focuses upon a procedure recognized by Islam – talaq-i-tafwid or the contractual delegation to the wife of the right to pronounce talaq on behalf of her husband in regard to her own marriage.

From the same publication there are two excerpts from pre-1939:

Delegation of divorce is the assignment of a power . . ; it is not agency, and therefore the husband can not retract from it; so much so that if he gives her . . . [such authority], and then swears that he will not repudiate her, but she divorces herself, according to the most approved opinion, the husband shall not be treated as guilty of breaking his oath

In addition I have found the term khula, mentioned in this thesis:

I didn't find many useful references to this term, but in concept it seems similar to Tafwid. 'Mehr' is a kind of dower, paid by the groom to the bride. Women who initiated divorce often lost the right to their own dowry as well. In many of the references to Tafwid, I found that it was primarily upper class or intellectuals who were allowed to use (or knew of) this method for divorce.

If using conversions was due to courts misinterpreting Islamic law, the chances of an uneducated woman knowing her options were slim. For those who had no means of navigating a divorce, conversion may have been the least strenuous option. The question also asks how common this was, which is difficult to estimate given that India is a huge and diverse country, and laws can be interpreted differently from place to place.

21
Colonisation of India: Which regions of the United Kingdom did colonial personnel come from?
13
Why did Nepal and Bhutan not become a part of India like other princely states when colonial rule ended?
12
How did India become a founding member of the UN?
4
Did ancient Egyptian women have legal equality with men?
3
When did India become a major trading center?
6
What rights did women have in Switzerland in the first few years of the 20th century?
20
How did Christianity replace Roman Paganism and other ancient religions?
13
What effect did the Bronze Age collapse have on India?
26
Why did Roman women have no praenomen?