How obvious was lend-lease equipment to the average Soviet soldier?

As the question says, was the average USSR soldier aware that the equipment isssued to them had come from the United States? Jeeps and aircraft are well known to have been sent to the USSR - would the driver/pilot have known just by visual inspection that this was American equipment? E.g. branding, other markings in English, imperial units on the instrument panels, etc.? Were the rest of the soldiers aware of the provenance of the equipment that was used to support them?

Apart from the drivers and pilots actually using the equipment, would, say, an infantry grunt who only sees it all in passing, know it’s not Soviet equipment?

Most obvious parts of the lend-lease for an average Soviet soldier were food (especially canned spam etc.) and trucks. Meat conserves and trucks were well familiar not only to the soldiers but also to the rest of population, this was the most common source of meat at the time of war. The word "studebaker" became a Russian word for a generic large truck. Not used anymore, but the war generation used it.

Two other items which covered very large portion of Soviet needs were aviation fuel and telephone wire (waterproof telephone wire almost 100%), but since these things are not marked, these facts were not widely known. Soviet union has large oil deposits, but technology and ingredients to produce high-octane aviation fuel was missing. So they had to import the technology, missing ingredients and the fuel itself.

My source: personal experience. I knew many people in Soviet union who lived at that time. Most men of the previous generation to mine were former soldiers. Trucks and meat conserves is what they all remembered. About aviation fuel and telephone wire, I read somewhere. Official Soviet propaganda tried to play down the amount of help. When they had to mention it, they counted only tanks and airplanes, adding that Soviet Union produced much more tanks and airplanes itself, and tanks of better quality. It was not mentioned during the war and immediately after, that famous Soviet aces flew American airplanes. Much later the aces mentioned this in their memoirs.

Drivers certainly knew what they were driving, and pilots knew what they were flying. One driver told me the following story. After the war they had to return the trucks. It was commanded that they have to be returned in perfect shape. Drivers spent a lot of time repairing and washing and painting and cleaning them, so the trucks were "like new", when they drove them to the ship terminal in Vladivostok. The drivers were stunned when they found that the trucks went under press before being loaded on the ship:-)

"Transport," such as trucks and jeeps and even aircraft are heavily branded, as is communications equipment such as radio sets. It's the ammunition that is "generic" that didn't carry American identification. But it was through the former that the average Soviet soldier was made aware of American aid.

I'll answer this question assuming it has one implication: was an average Soviet person aware, that the equipment had come to the USSR as virtually free aid, as people in the West think of it (and which it may well be)?

Certainly operators, maintenance technicians of aircraft, trucks, tanks, engines knew it came from the US or Britain. I consider it to be redundant to provide links here, since they definitely saw gauges with English inscriptions etc. and the USSR was not a 100% 1984 to "fix" such things. And they talked to other people, so, as was mentioned in other answers, it was not a secret.

But did people think of it in the same terms as it's usually understood in the West, as free aid to the USSR? I doubt that. I suspect that many don't think this way today either. Even I, who is generally interested in the topic of WW2 was sure, that everything was purchased by the USSR.

To understand how this happened to be, I'd suggest that one looked into a way Lend-Lease is covered in government approved textbooks today.

A British military-economic mission arrived as soon as June 27 [1941]. The treaty on mutual action in the war against Germany was signed in Moscow on July 12 1941 on the proposal of the Soviet government.

In his turn, F.D. Roosevelt, beginning from July 21, allowed to start selling arms and military materiel destined to the USSR. Some in Washington hoped to make money on this, receiving from the USSR "all … [sic] the gold, which would come as payment for the supplies of the goods, until it's exhausted", — was recollected by Secretary of the Interior Harold L. Ickes.

But nevertheless those steps started the formation of the Anti-Hitler coalition — the alliance of countries with such opposing interests, that it could have never been possible under different circumstances.

Peculiarities of military aid to the USSR's allies [sic]

There could have been more mutual gain, had the USSR received from the Allies radar technology secrets, vitally necessary to fight German aircraft. That technology belonged to both the USA and Britain. But initially the American government vetoed its transfer, then when in Washington switched their mind, the British opposed it.

Despite strong isolationists feelings US Senate passed the Lend-Lease law. According to it the USA provided aid to countries, whose opposition to aggression was recognized as vital to the defense of the US. Lend-lease deliveries were due to be payed after the war, only in case, if they were not used for military purposes. This way, even though the USA were reluctant to go to war, they played the role of a non-fighting ally of Britain.

And I can say, that 20 years ago the Ukrainian text was virtually the same.

So as one can see there are appalling differences between the English Wikipedia article about Lend-Lease, and the narrative which the majority of people in the former USSR are familiar with.

When I read the Wikipedia article today, I was stunned. What I used to know about Lend-Lease was that it started in 1940 or 1941 as a "cash and carry" program, then that some British ships were sunk carrying gold from the USSR (from here you assume that it was a usuall practice for them to return with gold, because not all of them were sunk) and that the American embassy in Russia 10-15 years ago claimed, that the USSR hadn't payed everything and formally was still owing several millions of dollars, though the embassy didn't press for payment.

So I have serious reasons to believe that during ww2 people in the USSR thought that the American/Brithis goods were purchased by the Soviet government, I simply cannot imagine that during Stalin's reign it could be different, if that is how it's been being portrayed for the last decades.

Question:
How obvious was lend-lease equipment to the average Soviet soldier?

.
It was impossible for the Soviet Union to hide the vast scale of US lend lease from the average Soviet soldier during WWII.

US deliveries to the Soviet Union

One item typical of many was a tire plant that was lifted bodily from the Ford Company's River Rouge Plant and transferred to the USSR. The 1947 money value of the supplies and services amounted to about eleven billion dollars

Lend-Lease: How American supplies aided the USSR in its darkest hour 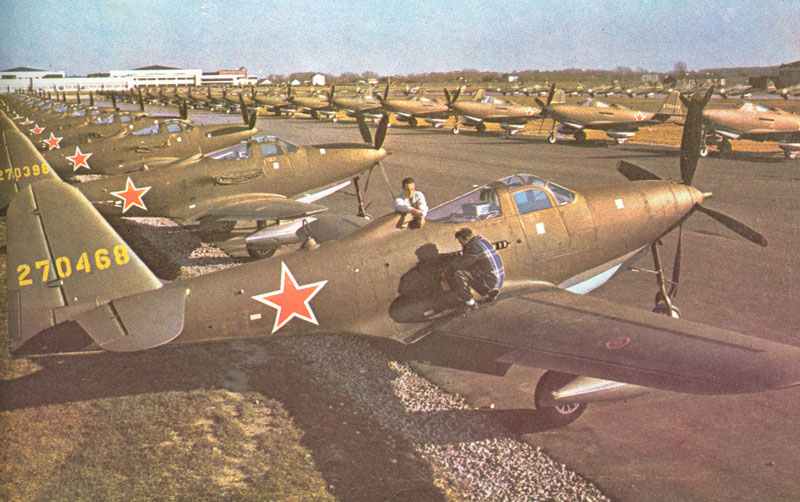 Bell’s plant at Buffalo delivered well over 2,000 P-63 Kingcobra to Russia, where they stood up well to the harsh environment.

.
The Soviets hide lend lease from their civilian population and erased it's scale and scope in their history during the cold war.

Soviet General Georgy Zhukov after WWII from 1963
"Now they say that the allies never helped us, but it can't be denied that the Americans gave us so many goods without which we wouldn't have been able to form our reserves and continue the war.

We didn’t have explosives, gunpowder. We didn’t have anything to charge our rifle cartridges with. The Americans really saved us with their gunpowder and explosives. And how much sheet steel they gave us! How could we have produced our tanks without American steel? But now they make it seem as if we had an abundance of all that. Without American trucks we wouldn’t have had anything to pull our artillery with."

Stalin wrote to Roosevelt after the first of five war time aid provisions were passed by congress. which made up lend lease
"Your decision, Mr. President, to give the Soviet Union an interest-free credit of $1 billion in the form of materiel supplies and raw materials has been accepted by the Soviet government with heartfelt gratitude as urgent aid to the Soviet Union in its enormous and difficult fight against the common enemy – bloodthirsty Hitlerism,"

25
What happened to US's Lend-Lease machinery given to the Soviet Union?

9
What was the maximum percent of the Soviet territory that was under Nazi control?
22
Did American policymakers seriously consider scaling down Lend Lease Aid to the Soviet Union after the battle of Kursk?
22
How close was the Soviet Union to collapsing during WW2?
25
What happened to US's Lend-Lease machinery given to the Soviet Union?
1
What role (if any) did lend-lease equipment play in the Second Battle of El-Alamein?
29
How popular was the Soviet Union?
4
When were 1942 lend-lease trucks sold to the public?
4
How to find out where a particular SS soldier was interned?
3
Could the U.S. have used "Lend Lease" to force Germany onto the horns of a dilemma?
4
Was the average lifespan of a soldier deployed within Stalingrad only 24 hours?