Were Soviets invited to the Marshall Islands to observe the first hydrogen bomb detonations?

In 1952, did the US invite, or consider inviting, Russian scientist to observe the detonation of the first hydrogen bomb? These were above-ground tests far away from Russian in the Marshall Islands, and thus not detectable with seismographs. How was Russia to know the USA had an even greater "stick" to threaten them with?

I was taught US defense posture was to never use nuclear weapons because collateral civilian death was unthinkable. Rather, it was the threat of their use that maintained the peace. But, if Russia were to never know about the USA possession of the hydrogen bomb, 1000 times more powerful than Little Boy, it could not function as a deterrent.

One reason to demonstrate the hydrogen bomb to Russia would be to use it as a deterrent and maintain peace. I cannot think of a reason to keep it a secret.

The USA could be confident that the USSR would learn about the hydrogen bomb test from atmospheric sampling. It's possible to detect extremely low levels of radioactive isotopes in the atmosphere, some of which are characteristic of nuclear explosions.

Doing this sampling has given important clues to some countries' nuclear weapons development programs, so all nuclear and aspiring-to-nuclear powers do it. The present-day USAF operates specialised WC-135 aircraft to carry sampling equipment, but any high-altitude aircraft will serve, and the mission was formerly carried out by WB-50s.

Of course, this method doesn't tell you where a test took place, although it can give a pretty good idea of when, due to the different half-lives of different fission products. Seismic information is good for both of those, although atmospheric tests don't generate as a strong a signal as underground ones.

For this example, there was only one plausible candidate for an H-bomb test (and yes, it is possible to distinguish types of nuclear weapon this way), so the US could be confident that the information would be interpreted correctly.

Question 1:
Were Soviets invited to the Marshall Islands to observe the first hydrogen bomb detonations?

No. By 1952 the Cold War has begun, the US was at war with Soviet proxies in North Korea and the Soviets had tested their own nuclear bomb August 29, 1949. While 1952 was the first hydrogen bomb test it was the sixth series of nuclear tests conducted by the United States. The Soviets weren’t invited to any of them. The Soviet's had known about America’s nuclear program before the first American test from their spies inside the Manhattan Project.

Developing nuclear bomb technology was a contest, one in which both sides feared the other's ability to gain the advantage. The Soviets would test their own hydrogen bomb a few months later in 1953 and take the perceived lead in nuclear race with the launch of Sputnik in 1957.

Sputnik Crisis The USSR used ICBM technology to launch Sputnik into space. This gave the Soviets two propaganda advantages over the U.S. at once: the capability to send the satellite into orbit, and proof of the distance capabilities of their missiles.[6] This proved that the Soviets had rockets capable of sending nuclear weapons from Russia to Western Europe and even North America. This was the most immediate threat that the launch of Sputnik 1 posed. The United States, a land with a history of geographical security from European wars, suddenly seemed vulnerable.

Question 2:
I was taught US defense posture was to never use nuclear weapons because collateral civilian death was unthinkable.

No First Use see United States.

Question #3
One reason to demonstrate the hydrogen bomb to Russia would be to use it as a deterrent and maintain peace. I cannot think of a reason to keep it a secret.

The reason not to invite the Soviets to the test would be to keep observations they might make from aiding the Soviet's Nuclear weapons program. At the very least the Soviets could have better measured the magnitude of the blast and perhaps gotten insights into the technology. Not inviting the Soviets to the test allowed the United States to more carefully control what information the Soviet's were able to discern. The same reason why no observes from the United States were ever invited to any Soviet Nuclear tests.

While invitations to attend the tests were not extended to the Soviets and access to the tests themselves were controlled, the pursuit of the H bomb was not a secret. Nor was America's acquiring the bomb. When Truman first backed the production of a "super bomb" or hydrogen bomb he did so publicly in 1950 and shortly after verifying the results of the Hydrogen bomb tests the US came out publicly and acknowledged they now possessed a Hydrogen bomb. 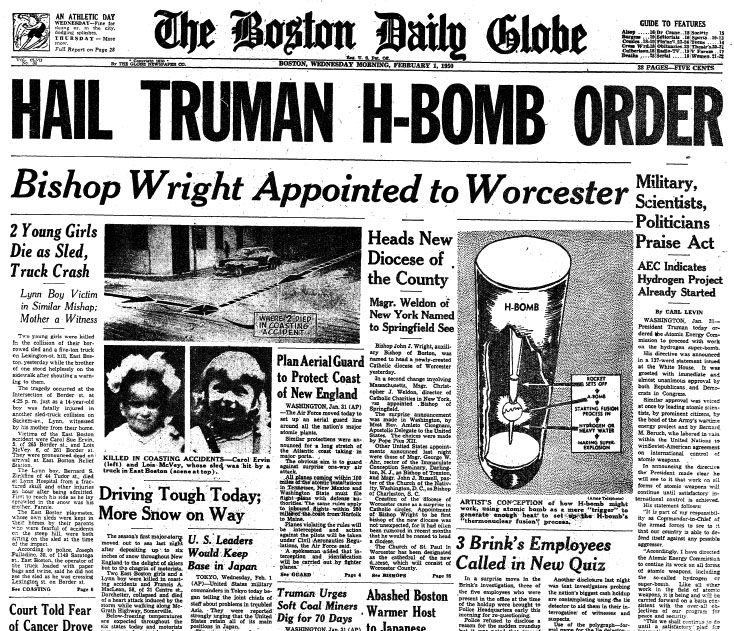 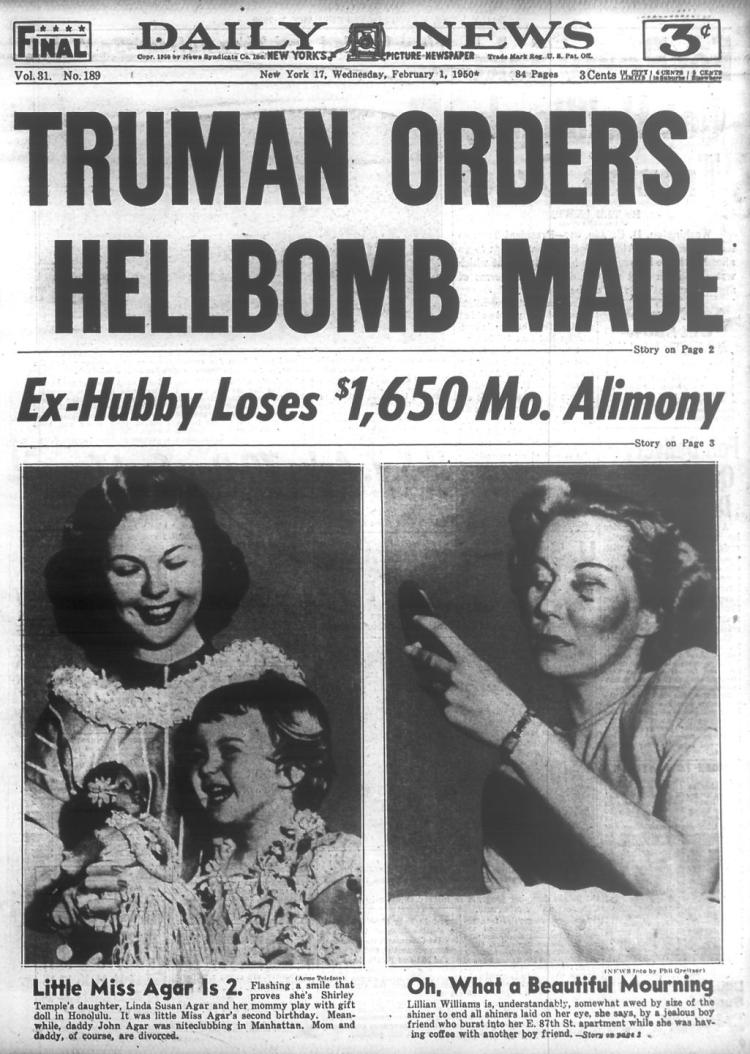 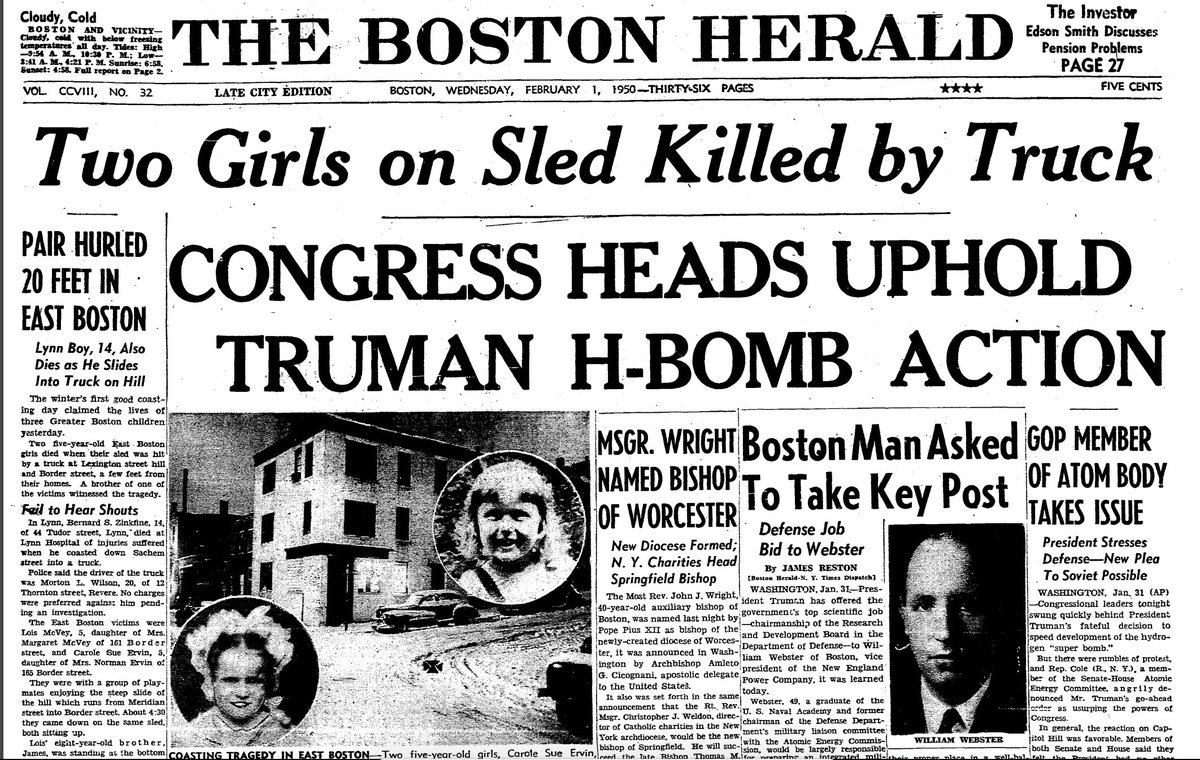 Then after the H-Bomb tests in the Marshal Islands were evaluated and determined to be successful, details were released publicly that the US had successfully tested an H-Bomb. 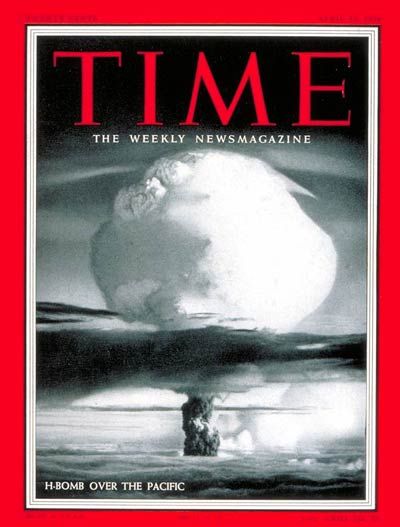 from jwenting for several decades the US had the policy that nuclear weapons were no different militarily from any others and that they would be used if it was deemed the right weapon for a specific target. That said, and at the same time, any use required civilian authorisation and support as the actual warheads were under control of the atomic energy commission and only released to the armed forces after direct orders from the president.

"Several decades" statement is arguable, at least with regard to U.S. policy. But it is true that after WWII important policy makers in the United States believed conventional forces were no longer necessary in the nuclear age. That nuclear weapons alone were enough to deter future aggressors.

The flaws of this policy quickly became apparent as during the cold war the Soviets and United States spared in numerous proxy wars where one side or the other participated clandestinely. By 1964 election President Johnson painted his rival for the Presidency, Barry GoldWater as an extremists by suggesting Goldwater would use Nuclear weapons in the conventional war in Vietnam. Clearly by the early 1960's there was a clear distinction between conventional and nuclear forces inside the United States.

Barry Goldwater 1964 presidential campaign
Johnson also used Goldwater's speeches to imply that he would willingly wage a nuclear war, quoting Goldwater: "by one impulse act you could press a button and wipe out 300 million people before sun down." In turn, Goldwater defended himself by accusing Johnson of making the accusation indirectly, and contending that the media blew the issue out of proportion.

You're talking about the period 1945-1955, during which modern notions of deterrence were not yet in place. The symmetrical guarantee of mutually assured destruction was not fully in place until about 1955. There was actually a considerable period in the aftermath of WW II during which the US's nuclear capability was basically a bluff -- they had no practical nuclear arsenal and no way of delivering warheads to the USSR. (A mock bombing run on Dayton, Ohio, ended in total failure.) There was also a later portion of this decade during which the US did have the capability of annihilating the USSR, but the USSR lacked any similar deterrence against the US. Hotheads like Churchill and LeMay wanted to go ahead and carry out a nuclear first strike against the USSR. It was not at all a foregone conclusion that Truman would prevent such a thing from happening. In a landscape like this, where an intentional first strike without deterrence is a real possibility, having your enemy know your capabilities is a disadvantage, not an advantage.

During this period, there was no expectation that each side should have accurate knowledge of the other side's capabilities. The soviets had an extensive spy network in the US, consisting of people like Alger Hiss, the Rosenbergs, Klaus Fuchs, and Harry Gold. The US was trying to prevent the Soviets from having accurate knowledge. The Soviets undoubtedly did get information about the tests, both through espionage and through atmospheric sampling, as described in John Dallman's answer, but that would not necessarily have been considered a desirable thing by the US. The concept of "trust but verify" belongs to a much later era of history (the Reagan administration).

The technological details of a hydrogen bomb were very unclear during this period. Unlike a fission reaction, a fusion reaction can't just be tested nondestructively in a lab. People like Teller and Ulam were coming up with a lot of different concepts, only some of which ended up working. People didn't know things like how much tritium would be required. From the point of view of the US, it would be desirable to keep the Soviets from finding out this type of information, so that their own bomb effort would take longer. Knowing that the Ivy Mike test had succeeded would not really tell the Soviets that the US had an effective H-bomb capability. In fact, the Ivy Mike Bomb used liquid deuterium, which would have been impractical in a weapon.

Not the answer you're looking for? Browse other questions tagged united-states soviet-union cold-war nuclear-weapons or ask your own question.

6
Who were the first two democratically elected leaders of Russia?
6
Were US decision makers aware of the destructiveness of the Bomb of Nagasaki?
20
When did the Soviets get the ability to drop a nuclear bomb on the United States?
5
What were the plans to use the atomic bomb if it had been in time for the war in Europe?
11
How were the first American citizens granted citizenship?
0
Are the war plans published in "Dropshot: The American Plan for World War III against Russia in 1957" genuine?