What is the origin of the lake tank image that has become a meme? 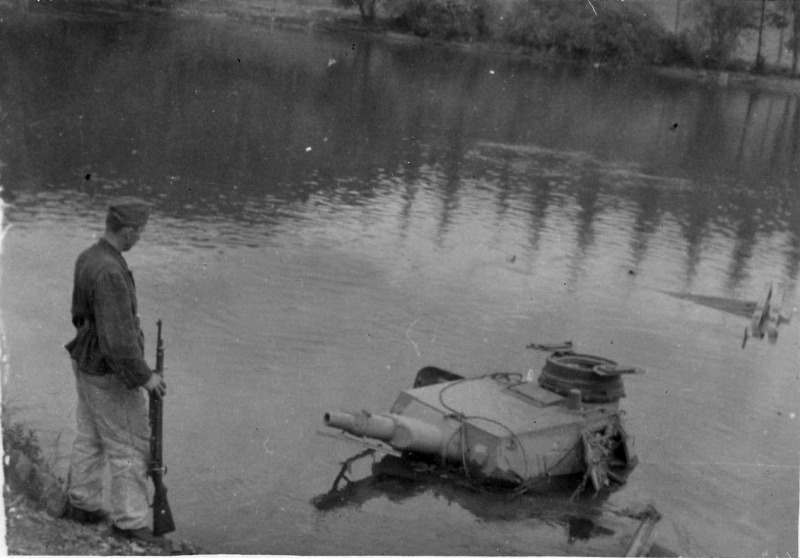 This image, the template for the "Panzer of the Lake" meme, depicts a soldier from an unknown nation looking at what appears to me to definitely be a Panzer. However, no-one seems to know the origins of the image. So, where and when was this image taken, and where was the image originally published?

Tank gun itself is short barrelled 7.5cm KwK 37, as mentioned in nvoigt comment. This means that the tank is either early PzKpfw IV (D to F1 versions employed in USSR) , or less likely PzKpfw III Ausf. N . However, PzKpfw III Ausf. N usually had armored skirts around turret and hull, plus camo pattern painted on. If we assume tank to be Pzkw IV, then it must be either from 1941 or early 1942, because after that long barrelled version of Pzkw IV appeared, and short barrelled versions were either withdrawn or destroyed.

Solider on the picture is even more interesting. Rifle in his hand does not appear to be usual Soviet Mosin-Nagnat which has distinctive magazine protrusion near trigger guard. It looks more like German Kar98k, especially shoulder stock. On the other hand, uniform is rather peculiar, if we could call this attire uniform at all. Side hat could be either Soviet or German since both sides used them. However, Germans in the field usually had helmets, especially in 1941-42 period, so it is a bit more probable that this is Soviet solider rather then German. Uniform confirms this, it doesn't look German at all. Top part could be Soviet Telogreika, but it doesn't appear to be padded or quilted (I could be wrong on this ) and it appears more like summer then winter Soviet tunic. Pants look like a part of winter uniform, and both Soviets and Germans had similar. However, it should be noted that Germans in the winter of 1941/42 had problems with their supply trains, and often had to resort in using parts of Soviet uniform to keep themselves worm.

Overall, as a probable (not definite) conclusion, I would guess this: Picture is taken in the spring of 1942. Panzer in question tried to go over ice, but the ice was weakened and broke, few days latter warm temperatures melted it completely. Solider in question could be German : he is using German service rifle, but still wears parts of Soviet military uniform acquired last winter in order to survive. His units has seen a lot, as a consequence military discipline is relaxed, soldiers do what they have to do and officers & NCO let them because only few of them remain in the field. Other option, he is a Soviet solider, maybe partisan, and this explains German rifle. In case of partisans, he is wearing various part of either Soviet or German uniforms that he could find. There is a possibility that he is a regular Soviet solider using trophy rifle - again in 1941/42 strict Soviet discipline was relaxed and officer often turned blind eye to violations if the man in question was good fighter.

While I can't identify the photo, I can narrow down the tank. I believe it is a Panzer IV D.

It has the short barrelled 7.5 cm KwK 37 narrowing it down to a Panzer IV Ausf. A through F1 or a Panzer III N.

Both had very similar turrets, but the Panzer III N has a wider gun mantlet, a more angular shroud, and lacked (or covered) the distinctive angular view ports (I believe they're view ports) on either side of the turret face. 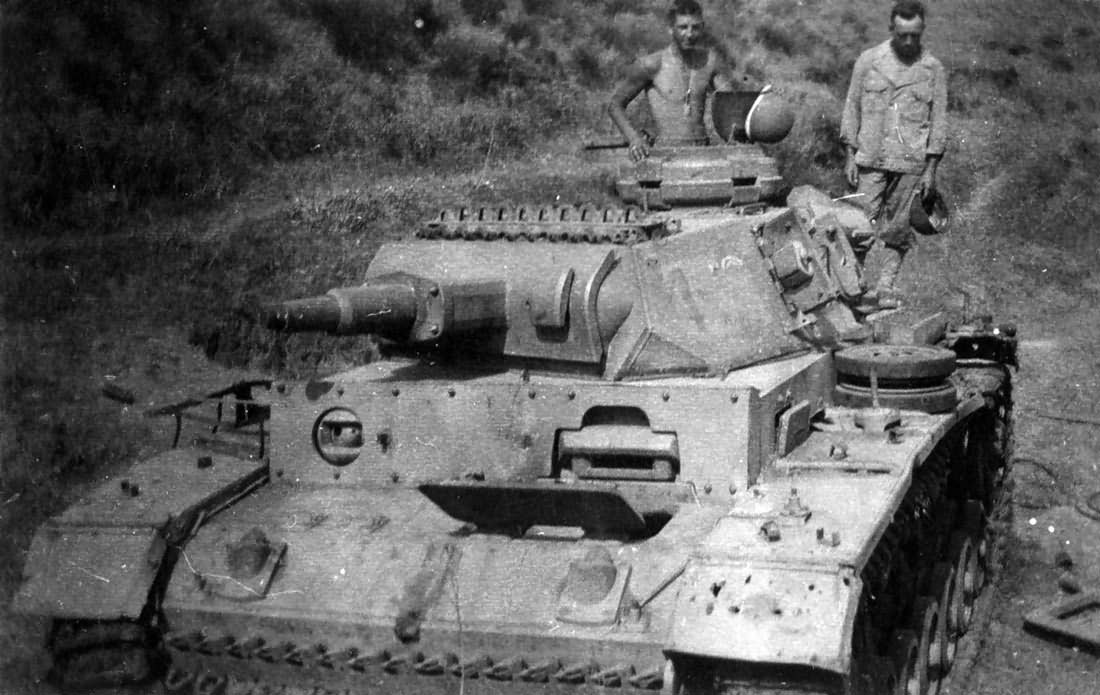 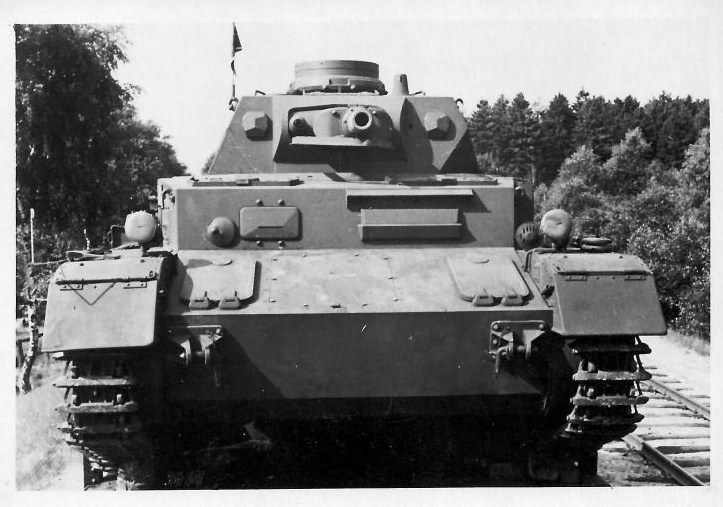 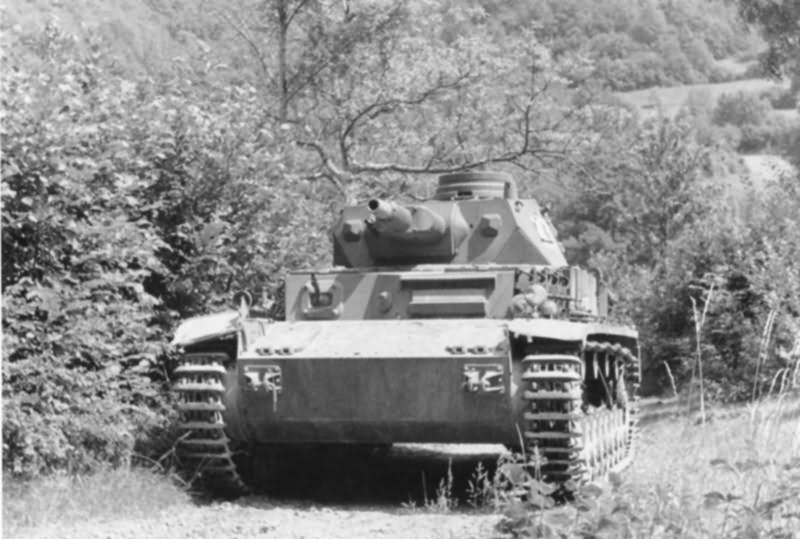 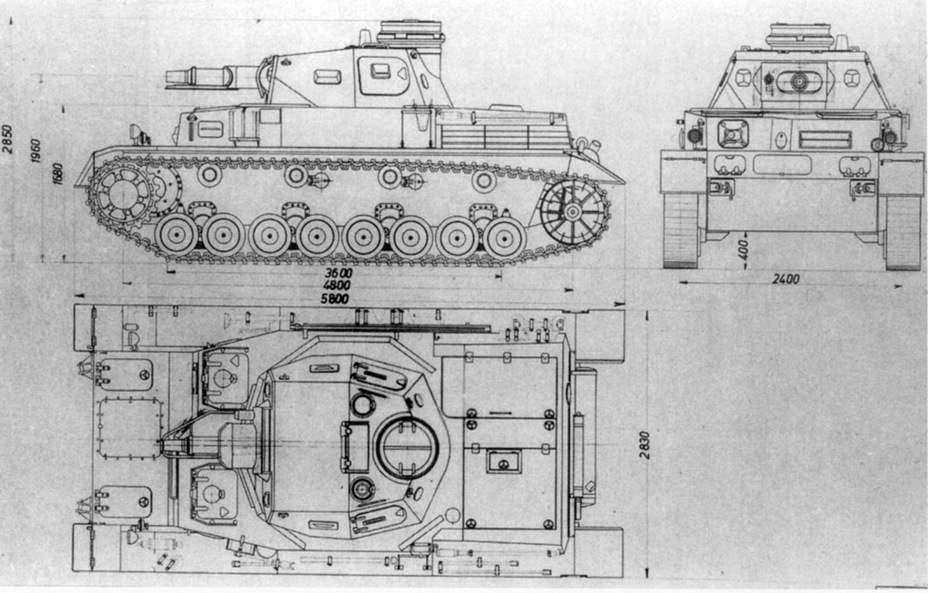 Note the front half of the turret top is smooth. There is a protrusion to the front left of the cupola (I believe it's a periscope sight) and another circular opening to the front right. Finally, note the large ventilation hatch just in front of the cupola.

Model E would eliminate the ventilation hatch and replace it with a fan. The periscope was replaced with a hatch for signal flags. 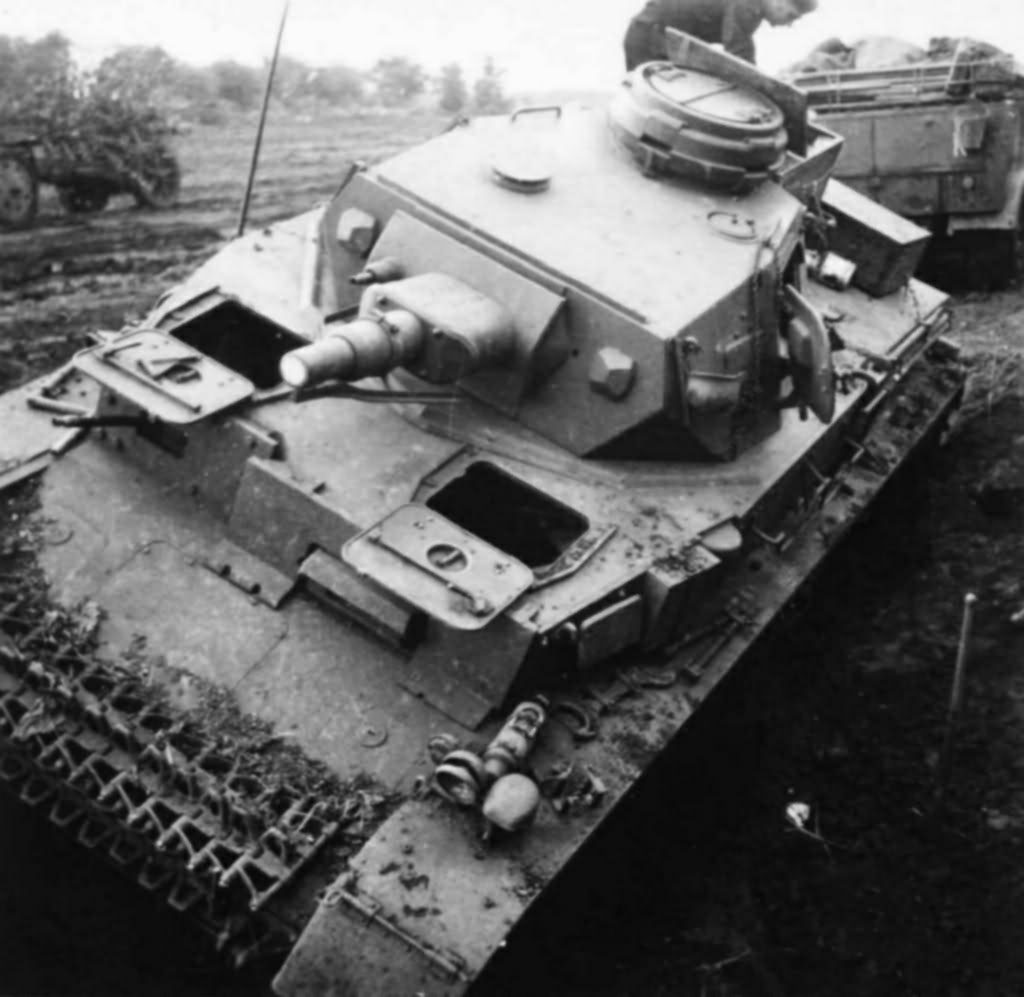 Panzer IV model D entered mass production in October 1939 which means it would be too late for Poland, but could have seen service in France, Norway, or the Soviet Union.

As for the soldier...

The rifle has a turned down bolt handle, a bayonet lug (missing from late rifles), a distinctive disassembly disc on the side of the stock (also missing from late rifles), no front site hood (indicative of an early rifle), and you can just about make out extra detail in the nose cap (also early). This is likely an early Karabiner 98k which is missing its cleaning rod. See Forgotten Weapons: Evolution of the Karabiner 98k, From Prewar to Kriegsmodell.

ConeOfArc posted a video The Search for Panzer of the Lake.

He broke down what he could identify about the solder, probably German.

For the tank he confirms it's a Panzer IV D using similar criteria I used and he found two additional photos of what appear to be the same tank claiming to be from the Western front in 1940. 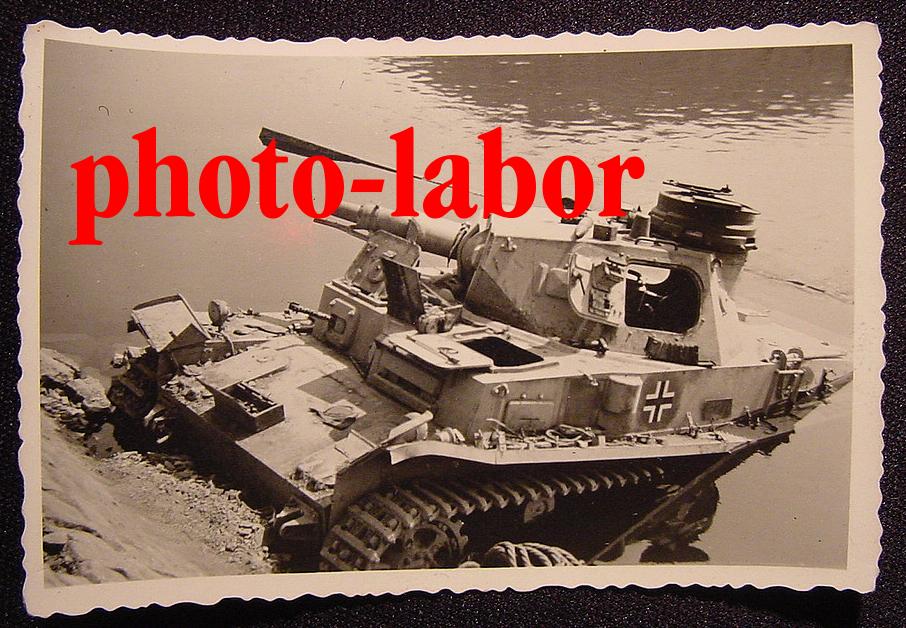 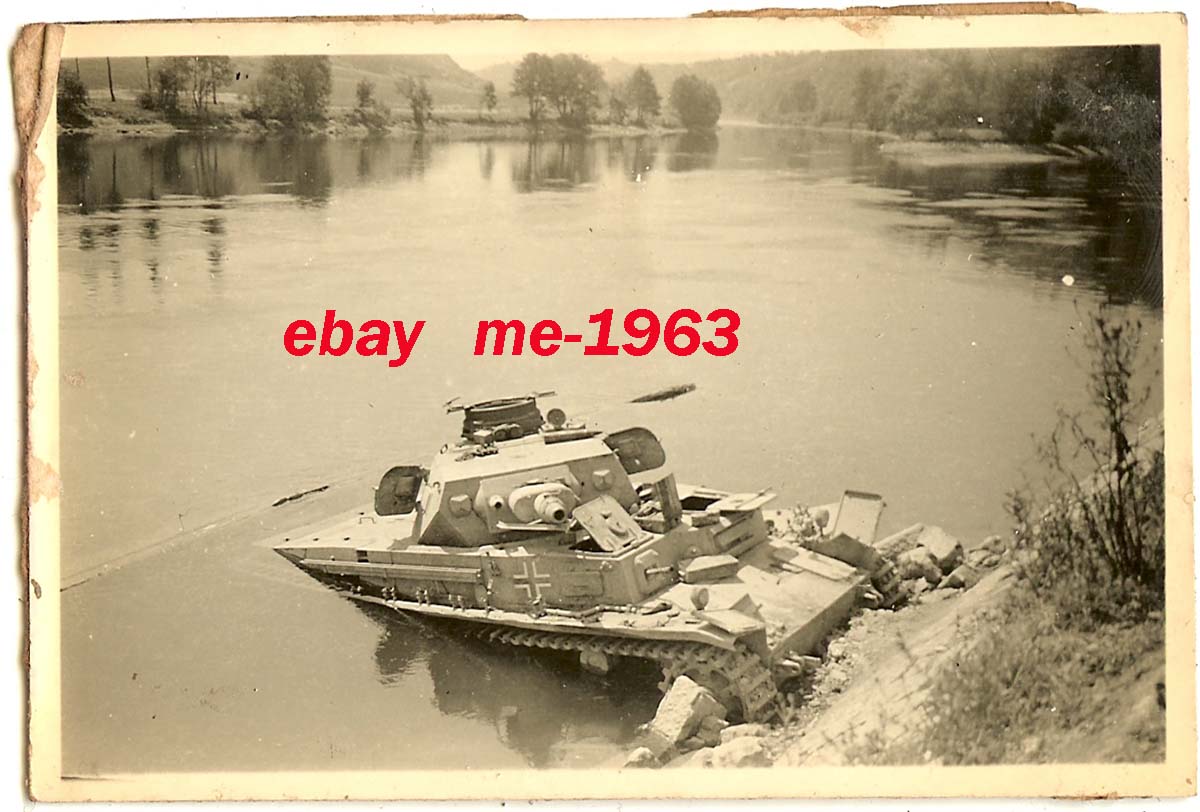 He then found a Russian source claiming it was found in Romania at the onset of Barbarossa in 1941.

Unfortunately that's all for now. ConeOfArc has put a bounty of $100 US for definitive proof of the tank's location. More detail can be had on ConeOfArc's Discord.

The rifle is almost certainly a K98 Mauser - one giveaway is the silver grommet on the stock halfway between the trigger and butt plate. A rod would slide through that grommet in a rack of K98's to lock them in the rack when not in use. Most K98's have that grommet, while that particular locking method isn't used much outside of the Mauser.

It is possible, though not guaranteed, that the solder is from Finland, during the Continuation War, when Finland sought to reclaim territory it had lost in 1940 from the Soviet invasion. In the few photos of Finn soldiers during that conflict, they tend to wear caps instead of helmets. In the wiki article, a Finn officer is seen with a Soviet officer after an armistice was reached in 1944, and the cap in the photo looks a lot like the cap that Finn officer is wearing.

Germany did supply some arms to Finland during this second conflict to take some of the pressure off of their own efforts, which would account for the Mauser rifle and even the Panzer 4... by 1942, Germany changed over to the longer barreled 75mm cannon to better combat the T34, and the few tanks they did send to Finland would likely have been the now obsolete short barreled 75mm equipped tanks.

I just wish to add a few things to this discussion

2: The Germans wore white trousers and a white shirt during training or leisure. He maybe a soldier who, due to unfortunate circumstances, or material shortages is wearing a cobbled together uniform.

The rifle looks to be a Finnish Sako m39, so this could be in Finland, as the Germans did send some tanks and such to the Finns when they fought the soviets.

Not the answer you're looking for? Browse other questions tagged sources tanks photography or ask your own question.

3
Missing link in the German tank development?
1
What's the story behind this photo from WWI?
46
Is the photograph “England’s Revenge in India” real, staged, or fake?
2
What is the story of this image?
0
1959 Supersonic Transport Aircraft Committee (STAC) report (on Concorde)
19
When did Josef Wissarionowitsch become “sexy” Stalin?
7
What is the approximate date of this photo?
19
Is that armistice wagon photograph authentic?
31
When was this photo of Mission Dolores *actually* taken?
19
Is this a Sherman, and if so what model?