What exactly is a Tang dynasty 壺 (pot)?

I have asked this question on Chinese Stack Exchange but received no satisfactory answer there so far. I think it is relevant to the History Stack Exchange and will link these two questions together.

There are at least 33 types of ancient sacrificial, wine, food and water ritual bronze vessels of ancient China, none of which are named 壺 (pot), but some of which may fall under the category of being a 壺 (pot).

According to my research the ancient Tang 壺 was a wine vessel (12 types of wine vessels listed above). But seeing as there are so many very precise different kind of ancient vessels, I want to know exactly which wine vessels would fall under the category of being a 壺 (pot) during the Tang dynasty and what it would look like.

For example, I came across this Pot titled 鎏金银嵌宝仿唐壶: 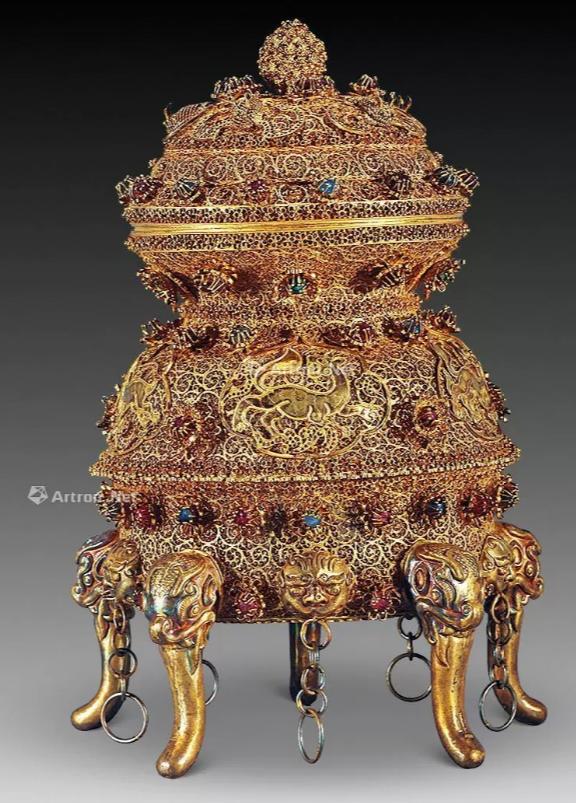 This imitation 唐壶 is very different from the regular spout and handle pots someone suggested on the Chinese Stack Exchange, and on the link I provided above I see that the long spout was a later addition to the pot that was not common previously. So I don't know the EXACT range of styles that the word 壺 encompasses in the Tang Dynasty era.

Also, whereas I want to know the full range of what a 壺 encompasses in the Tang era, I'm particularly interested in the finer 壺 made of jade or gold or etc. 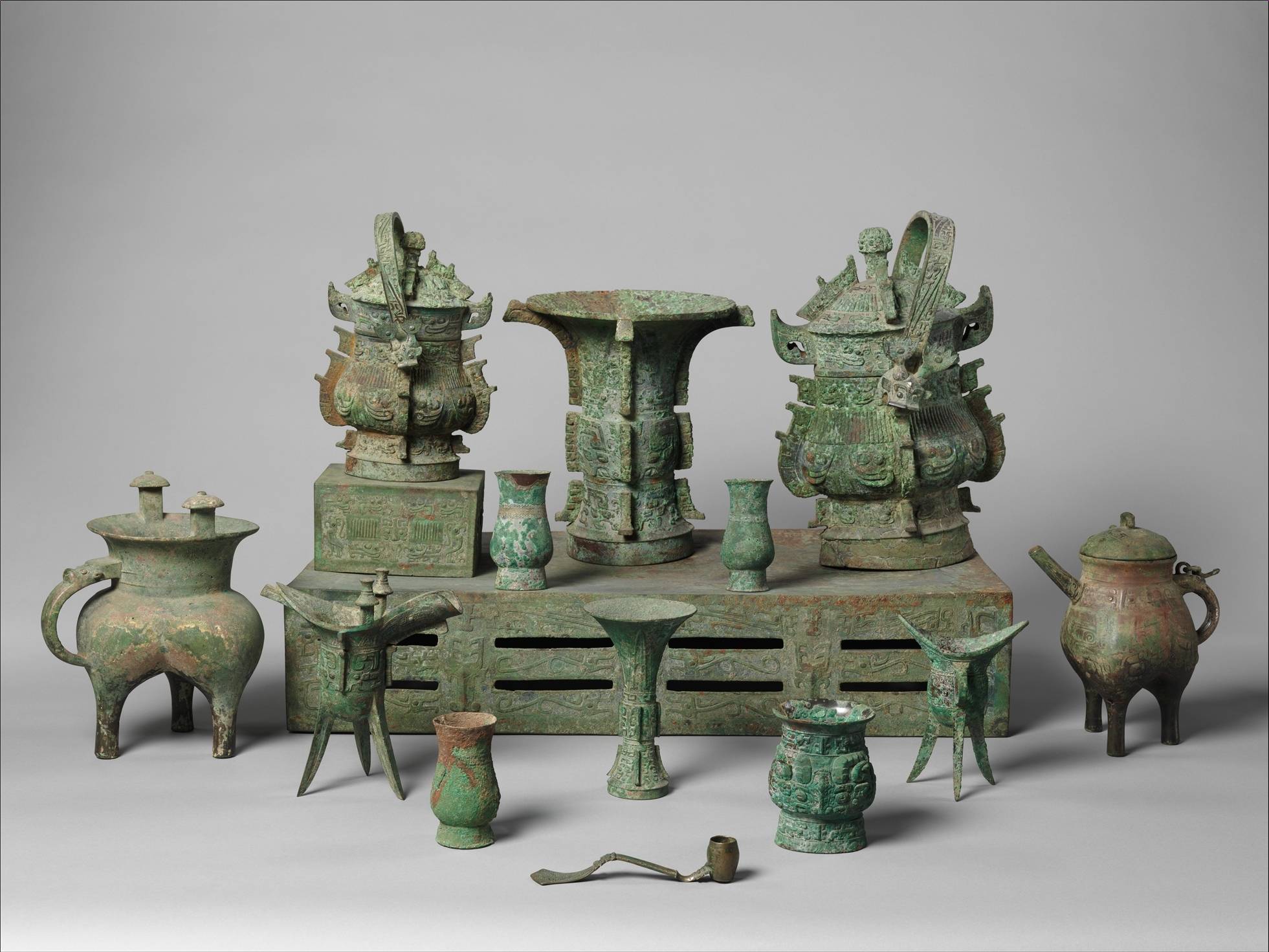 This is a picture of a late 11th century BC altar set of wine vessels (Western Zhou Dynasty, long before the Tang Dynasty, kept at "the Met"). The central vessel is a Zun (尊/樽/鐏), and there are many different kinds of wine vessels including the Jiǎ 斝 and Jue 爵 here pictured. Would all these classify as “壺”, or would some of them only be 杯 (cup)? I need to know which ones would classify under the “壺” category and which ones wouldn't. Certainly the Zun was still in use during the Tang Dynasty until at least the Song, but would it count as a “壺”?

This is what real Tang dynasty "pots" (壺) look like: 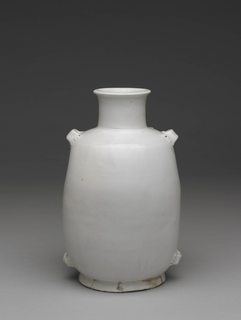 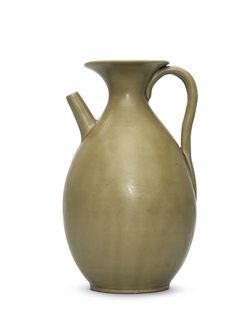 As you can see, a hu (壺) is more similar to a modern vase than pot. The item in the first image you found isn't anything historical or even an imitation of one. I suppose it is stylistically somewhat similar to this silverware item, which is classified as an unusual zun (樽): 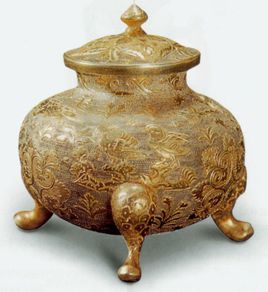 Note that bronze vessels, as mentioned in the question, went out of fashion after the Han dynasty as ceramics began to displace bronzeware. Designs likewise often evolved over time, so it's not necessarily possible to draw a direct line from Zhou classifications to Tang usage almost 1000 years later.

However, items called as hu (壺) did exist in the Pre-Qin era (often, inscribed on the item itself). They look not altogether dissimilar from their Tang descendants: 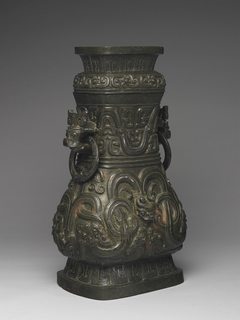 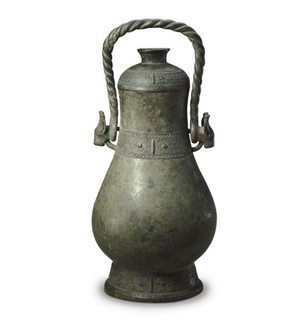 With bronzeware, the zun (尊), jia (斝), and jue (爵) all refer to specific types of vessels with distinct functions. The zun (尊) is for holding the wine, jia (斝) is for warming it, and jue (爵) is for the actual drinking.

A hu (壺) serves a similar function with the zun (尊), but differs in having a smaller opening as the images above demonstrate. A zun (尊) is typically an impressive, towering work that looks like: 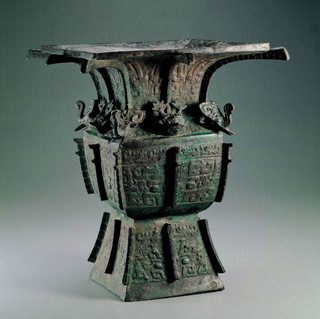 The classical bronze zun (尊) was impractical and rather more ceremonial in nature, causing it to die out soon after the Zhou dynasty. At the time of the Tang dynasty, wine was poured into a the phonetically identical zun (樽) before being scooped out for drinking: 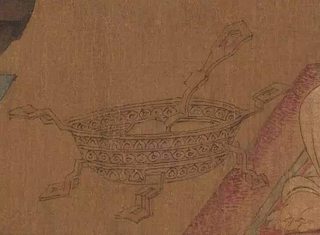 Source: cropped from the Picture of Learned Men

Not the answer you're looking for? Browse other questions tagged cultural-history archaeology medieval-china or ask your own question.

3
Did the Yuan Dynasty ever occupy Hainan?
0
Was Tibet ruled by Yuan Dynasty empires?
11
Why didn't Emperor Gaozu of Tang let Crown Prince Li Jiancheng command battles more often?
2
How is it determined what Culture is Period/Dynasty/Civilization part of?
5
What literature explains life in Han dynasty tomb towns?
1
Why where individual servings replaced with shared dishes during the Song dynasty?
1
Were the commentaries and subcommentaries part of the Tang Code?