How much did a transatlantic telegram cost in 1914?

How much did it cost to send a transatlantic telegram – if the specifics matter, say from New York to Berlin – in 1914? (Early 1914, before the war disrupted communications.) How much per word, and was there a minimum number of words?

The first book google hit for "cablegram price" is The Bolsheviks: Twilight of the Romanov Dynasty by John D. Loscher which contains a discussion of the prices and comparison to today's money. If I understand it correctly, it is one shilling a word and "five letters in conjunction counted as one word". One shilling (1/20 of pound sterling) was $3.11 of "American money" at the time of writing (published 2009). So a fifteen word cablegram from England to America was worth $46.65 in "today's money".

According to this commerce report from 1915 the minimum charge for week-end messages from Australia to USA 12s2d ($2.94) for 19 words. Deferred cablegrams cost 1s2d (28 cents) per word and full-rate messages 2s4d (57 cents) per word. Note that s is a shilling and d is a penny. This citation agree with the rate in the first quote which was for 1914.

A thorough discussion of various pricing options is available in Cable Services by Bill Glover (link by Pieter Geerkens). It will explain what deferred and weekend, as well as other types of telegrams and the associated rates mean. They appeared just before the first world war. For example, the weekend telegram

a minimum of 20 or 25 words paid for and in plain language. This telegram would only be delivered (posted) on the Monday following the day it was handed in.

while the deferred telegram

A minimum of five words must be paid for, they must be in plain language and in the language of the country of origin or destination or of a language specified by the relevant telegraph company.

This link also affirms the rate as 1s0d per word. A reduction to 9d came in 1923 because of competition from wireless.

Here are the telegram rates from Austria in 1913, found on page 226 of Józef Czech's Krakow Calendar for 1913 (the rates in the 1914 edition are the same), expressed in Austro–Hungarian hellers (1/100 of a krone) for telegrams 3–30 words long and for each subsequent word. The telegram form cost 2 hellers. According to a table on page 223, 1 US dollar was worth 4.96 Austro–Hungarian kronen.

However, there are no trans-Atlantic rates in the table, whose columns read: 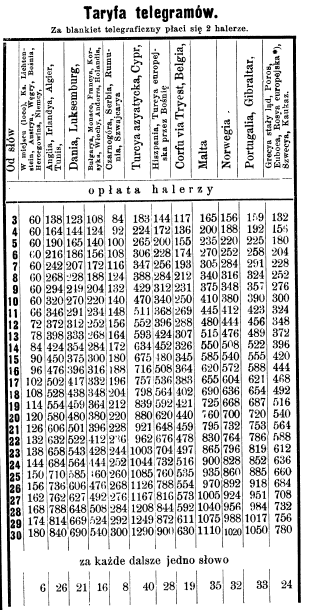 Source for information would be postal agreements of the Universal Postal Union, where rates and conditions were set for international fees.

Telegrams fees were often based on a combination of local, (possible) transit and end country fees, which changed with time.

The rates are given in gold (French) francs (FF)

In Germany the minimum was 10 words (or a base fee plus a word fee).

So finding a postal agreement valid 1914 should give you the needed information to work out a realistic cost.

Not the answer you're looking for? Browse other questions tagged economy communication 1910s or ask your own question.

8
During the American Civil War, could you send mail to someone across the border?
5
How much did helping the American Revolution cost France?
19
How much of an impact did the Roman emperors' civil wars have on their decision to debase the coinage?
8
How much did a telephone call cost in the USA around 1920?
9
When was the first known international call between two heads of state or government?
3
How did public debt financing through annuities work in the States General of the Netherlands?
18
How much did it cost to buy a ticket on the Orient Express from Paris to Istanbul in 1914?
13
How much did a sword cost in AD 1000 Constantinople?