Did any "tanks in front" tactic exist during WW2?

I am searching for a tactic that would be in service in the British and/or French army during WW2. It would consist in placing the tank on forward position of other elements, especially in front of artillery position and fixed anti-tank position.

I know there was at the time the idea, in Allied forces, to use tanks as small groups alongside infantry. Still, this did not oblige them to put them so close to the ennemy: they could be there to help infantry in its counterattack (like during WW1).

Two examples for this tactic:

A search of the Internet Digital Archive with "*Field Manual FM 17", then filtered for only publications prior to the mid 1950's, turns up a wealth of good information on the organization and deployment of US Armored Divisions from 1942. (Plus this unrelated 363 page Staff Officers' Field Manual (FM101-10) of Organization, Technical, and Logistical Data (1941)). Some of the most interesting in terms of this question are listed below.

Yes, U.S. tactical doctrine definitely promoted a tanks first attack philosophy, with repeated emphasis on speedy conversion from march order into combat order. Of the five example organizations for march and combat order, two specifically outline rapid deployment into a tanks first attack across a two Combat Command (~brigade) front. My reading of specifically FM 17-10 #48.g is that rapid swarming of the defense by light tanks, either with or without heavier support, was intended with the triple purpose of:

Chapter 4 - Marches
16. General ... b. The Armored Division marches in one or more columns organized into combat commands. ....
...
20. Formations.- a. ... For each of these formations, three tactical groupings have been made within the division. Two of these groupings in each formation are combat commands. The third grouping remains under the direct orders of the division commander and may be regarded as a division reserve. ...
c. ... The essential purpose of the groupings is to form teams which habitually operate together, thus making possible intimate and uniform team training. This tactical grouping also simplifies orders and control. The tactical organizations as set up are suitable for and easily deployed into attack formations (A1-A2-A3-A4 and A7) which are show and explained later in the text. ...
f. Depending upon the formation adopted the infantry regiments may move in rear of the tank elements in advance of such elements or with these elements. ...
g. Normally, infantry and engineers will be attached to combat commands in order to render prompt assistance in crossing obstacles and in demolitions.

Of the five example attack formations described only one (A3) has infantry leading the assault unsupported by armour. Two formations (A1 and A2) appear to be designed for a meeting engagement, with infantry only in the third echelon and reserve, leading with the light tanks. The final two (A4 and A7) are light and heavy assaults with infantry in the lead echelon directly supported by various combinations of light and heavy tanks, artillery, and engineers. 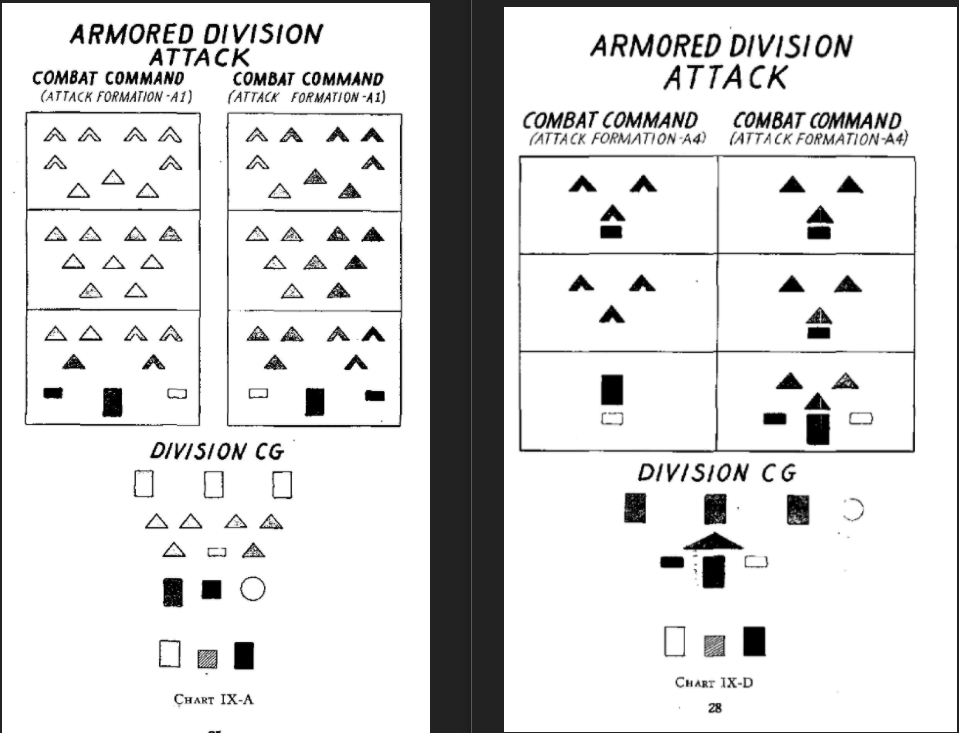 The Combat Command organization of all five example attack formations exactly mirror a corresponding example march formation, and is intended to be deployed into, without undue delay, from that march organization.

In the defense, infantry would typically be forward along with recon, with tanks for the counterattack force. However, tanks would be used to attack enemy recon elements.

Finally, the recon battalion had a tank company.

Not the answer you're looking for? Browse other questions tagged world-war-two france britain tactics tanks or ask your own question.

79
Why didn't France and the UK invade Germany in September 1939?
30
Was the Italian campaign a strategic mistake?
15
How dependent were the Germans on horse transport in their invasion of the Soviet Union?
14
Is this Hitler's account of seemingly counterproductive British radio war propaganda true?
8
Did Cossack cavalry defeat German tanks during WW2?
0
How did Red Army achieve to manipulate German Army in 1942 and 1943?
1
How did an advancing force walk during WW1?
4
How important was the Suez Canal to the Allies during WWII?
3
When did the allied "Desert Air Force" in North Africa smash Axis armour?
10
How did Soviet soldiers resist tanks during the battle of Shumshu?