How did Japan build an extensive rail network in Greater Tokyo?

Their rail network is like a spider web and also wondering how most of the lines are at-grade or eleveted excluding Tokyo Metro/Toei Subway lines, even though the suburbs are very dense with buldings. Did they clear out the buildings before building the rail lines or was it planned into it? A comparison would be something like the Shanghai Metro but their network is mostly underground, and it's a metro, not a commuter rail. 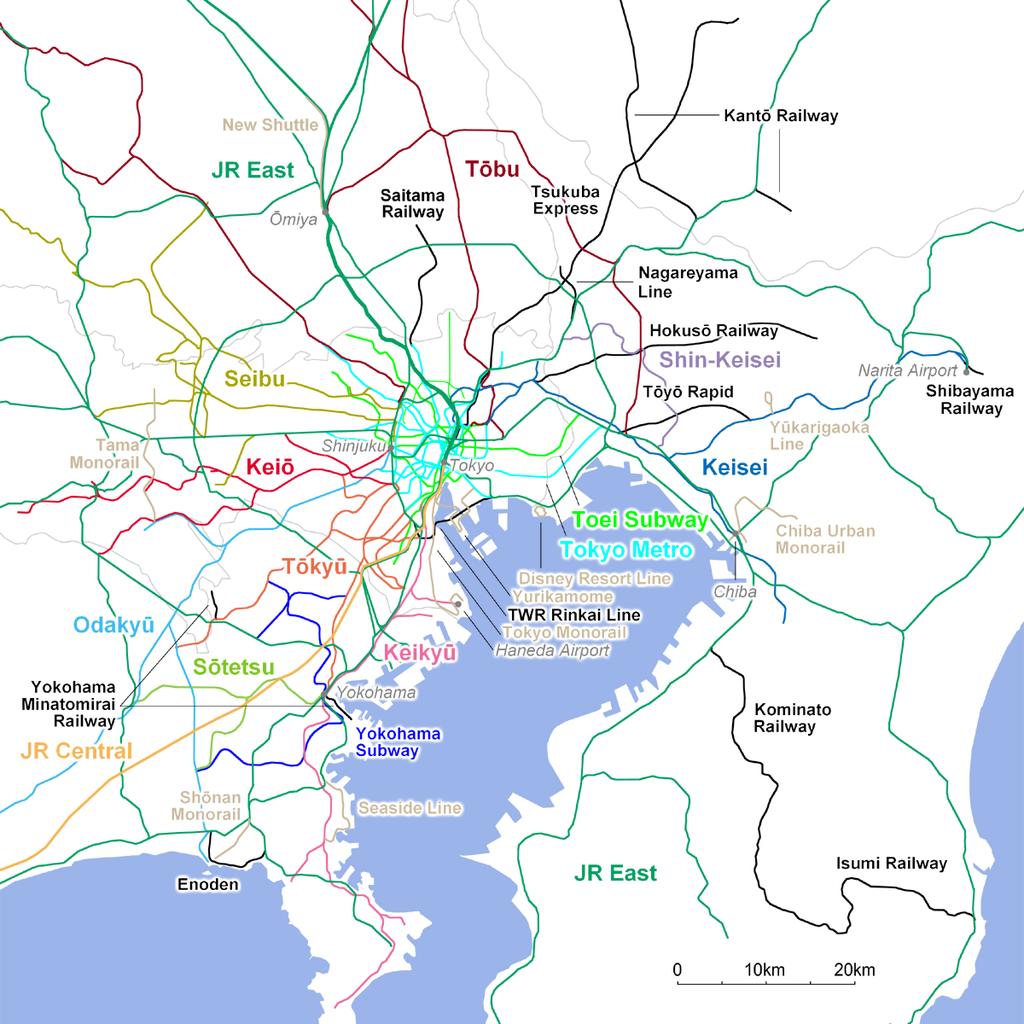 Also they built most of the rail lines without having them underground which I find pretty impressive considering their cities are dense with buildings. To clarify my question, how did they manage the compromise between rail design and existing urban desity. Also my question refers to the commuter rail built, not the metro/subway lines.

It appears that the answer to this question has more to do with Japans history rather then Tokyo's recent development into a mega-city.

The capital of Japan changed from Kyoto to Tokyo, then Edo, in 1868 to symbolize the transition of power from the traditional Shogun to the new Emperor Meji. With this shift in power Japan as whole began to rapidly industrialize with the help of foreign influence. One of the key symbols of industrialization at the time was having a developed transportation network, which Japan happened to lack. Emperor Meji ordered the construction of Japans new infrastructure and in 1870 the first Japanese railway was opened connecting Tokyo to Yokohama(Additional source).

From here Japan continued to rapidly expand its railway network to connect many of its already large cities with government support. Keep in mind that these railways were being built at a time when Japan had an authoritarian government and no existing infrastructure to compete with. Additionally the population of the area was significantly less then it was today. The greater Tokyo area at the time only had roughly 5 million people vs the over 40 million it homes today. 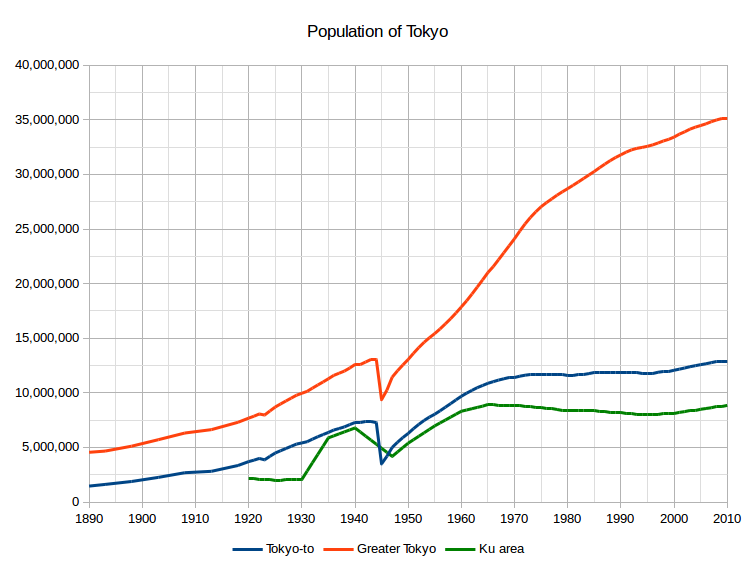 Because of this development style and the current state of Japan at the time, Japans railroads actually became the foundation for urban development. As railroads went up around the Tokyo area and more people began to live there, more residential areas were constructed around the existing train infrastructure. Thus many of the lines that you see today in the Tokyo area and much of Japan have existed there since before the deelppment of the highly populated area that exists today. This explains why the Tokyo area today has many above ground lines in comparison to other large or mega cities.

In the Modern Tokyo area, post World War 2 to now, many of the existing train lines have remained in the places that they were since they were built in the late 19th and early 20th centuries. With weak eminent domain laws in Japan, the expansion of new railways in already existing residential zones is nearly impossible, but given that many important zones were developed around the railroads themselves this has rarely been viwed as necessary. In fact during its redevelopment phases following the war Japan wanted to alter some of its existing infrastructure networks, but lacked the means to do so. Instead Japan and the Tokyo area have pursued a policy of land readjustment to deal with some of the inefficiencies in the city. This lead to many state planned and sponsored railroads as the rail industry remained in the governments hands until the 1980's.

Additionally the train companies that are opening new lines, are heavily diversified companies that have divisions in real estate, commerce, banking, etc.. Giving them the ability to create new economic centers around their railroads thus incentiveizing citizens to use and live near existing or new railroads.

To summarize many of the Tokyo area trains were built prior to the areas development into a mega city. Instead the mega city was built around the existing railways. Many of the lines were built under an authoritarian government that had the power and resources to will into existences hundreds of thousands of miles of railways in Tokyo and across Japan. Today many of the new railroads that are opened in the Tokyo area are opened outside the major cities or very near existing lines without the need to clear existing buildings and operated by a multitude of private enterprises. Thus they have no need to compromise between the existing urban structures and the usage commuter rail lines. Furthermore Wikipedia says it best,

The development of Japan since 1872 is analogous to that of its rail network. Over this period, railways became the most important means of transport – especially for the movement of passengers – and they retain this role in the larger cities today. With many suburban cities having been developed by railway operators, the unchallenged importance of rail is something unique in the world.

I found the direct answer. (To be updated later).

Yes, the government bought the houses and demolished (by today's JR East).

Hereunder the text under the quote in bold italic is the translation.

From this statement of the Board Of Audit Of Japan.

First, you need to understand that before 1987, all the railways were nationalized. (So-called Kokutetsu).

Regarding the kokutetsu Osaka construction department's payment to Mr.Fukuda who resides at Ooyamazaki village Otokuni county, Kyoto, which totals 15,010,420 yens on April and May 1961 in order to extend the Tokaido bullet train lines(operated by today's JR East) was not appropriate because the land the construction department bought was part of Mr.Fukuda's residence, only minimal, but the department paid the amount as a compensation for Mr.Fukuda's to move his whole residence

So, yes, Kokutetsu, aka today's JR east, paid the compensation fee in order to extend their lines.

Not the answer you're looking for? Browse other questions tagged japan railroads or ask your own question.

8
How did schoolgirls dress in Japan in the 1930s/40s?
40
What did Germany do in World War II about the different rail gauge in the Soviet Union?
6
How did Japan successfully conquer Vietnam (Southeast Asia) in WW2?
5
How many defensive lines did China build for the Second Sino-Japanese War?
3
Before WW2, how did Japan pay for imported US oil?
2
How did Japan get so many Nobel Prizes?
14
Why did WWI include Japan?
6
What is the origin and significance of karahafu (唐破風)?
11
How did himuros operate for storing and transporting ice in Heian Japan?