What was the ancient Jewish pantheon?

I have read that before the invention of monotheism, the Jews worshipped multiple gods of which traces remain in various texts. So I wonder whether it is possible to reconstruct it and what the gods there were.

One notable thing about the Hebrew Scriptures is that they don't typically claim that there aren't other gods; just that theirs is a jealous God, and thus the only one a Jew should worship.

This kind of attitude isn't really entirely unique in the ancient world. Most cities had their own patron god. A Pantheon was in many ways just the summation of all the regionally-worshipped dieties in an area.

There are mentions of other gods or supernatural beings throughout the Torah. My personal favorite is Leviathan, who based on descriptions in various parts of the Hebrew Scriptures, seems quite similar to the Norse's World Serpent (or perhaps a super fire-breathing sea dragon). Isaiah even prophecies a final battle between God and Leviathan (which God of course will win).

There are also two other supernatural creatures: Behemoth and Ziz, but they don't get as much face-time in the Bible. 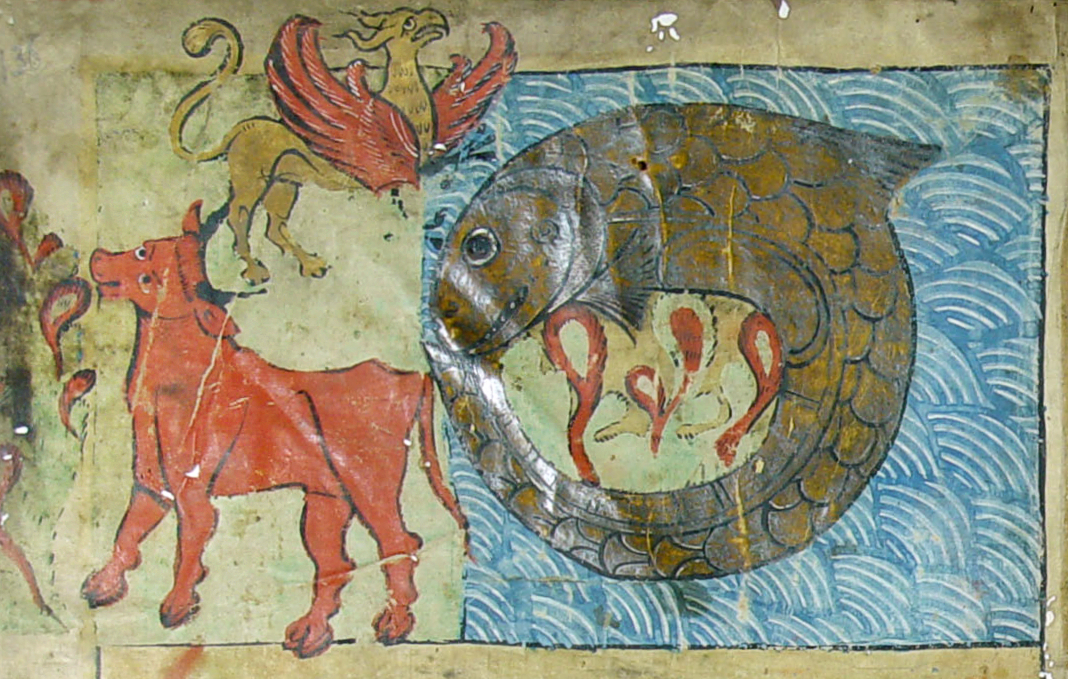 Baal is mentioned quite a bit in The Bible as well. However, that is basically a semetic word for "Lord". So essentially when The Bible uses that word it is saying "one of our neighbors' Lord god, rather than our own Lord God."

There isn't a traditional pantheon of deities in historical Judaism. The religion of Judaism dates to Abraham-(circa 2000 BCE) and it is Abraham who is considered to be the Father of Judaism, as well as the Father of Monotheism.

The story of Abraham, however, dates back to a polytheistic age. Remember, Abraham was Mesopotamian and came from the Southern Iraqi town of Ur. During Abraham's time, his Father, Terah, sold idols-(Terah's profession was not an uncommon one within Mesopotamia). In all likelihood, Abraham's family line-(that is to say, his grandparents, great grandparents and beyond), were traditional Mesopotamian polytheists and it is certainly true that Abraham's fellow Mesopotamian countrymen, were centuries old polytheists. In other words, Abraham, though a monotheist for the majority of his life, was still born and raised within a polytheistic family, town and country.

However, Abraham, at an older age, left Mesopotamia en route to the town of Hebron-(located in the Israel/ Palestine region). In permanently leaving Mesopotamia, Abraham would begin a newly independent monotheistic life with his family and particularly, his two sons, Ismail and Isaac. But, when Ismail and Hagar-(his mistress) were expelled from the Hebron region-(at the insistence of Abraham's wife, Sarah), they relocated to Arabia, whereby Abraham would return for a short period of time to help build The Kaaba with his son, Ismail.

Both Judaism, as well as Ismail based monotheism, originated with Abraham. However, both of the above mentioned religions were originally and deeply rooted in Mesopotamian polytheism-(beginning only two generations earlier with Ismail and Isaac's Paternal Grandfather, Terah and his distant family line).

Yes they worshiped other gods When you read the Torah, people use idols throughout. Two examples are Rachel and Michel; Rachel hides her father's idols under herself during a period(1), Michel uses one to make it look like David is sleeping so he can escape the palace(2).

The Author's of the Torah aren't trying to make a secret of it. People worshiped other gods while worshiping YHWH. If anything it they are pretty honest about it.

That does not mean they had a pantheon Where does it say anywhere that YHWH assembled an avenger like team of other gods?
The most you get is complaints from prophets about them. Elijah got pretty hot and bothered about Baal. He states one has to choose between the two, YHWH or Baal, not just make sure YHWH is tops (kings 18). Read "Isaiah 44:9-20" and hear a savage rebuke of idol worship, stating that what they holds in their hands (an idol) is not a god at all.

2.Sam 19:13 And Michal took an image, and laid it in the bed, and put a pillow of goats' hair for his bolster, and covered it with a cloth.

There were no Jews before monotheism. Judaism evolved from local Canaanite cults under the influence of Persian monotheism. Some historians speculate that the earlier Egyptian cult of Aten was the original spark, which was later refined under Persian rule. In either case, the new Jewish national identity was built much later around the Jewish religion.

The biblical stories of struggle between the faithful Israelites and the pagan Canaanites were written hundreds of years later and are not fully historical. If you read them carefully it's clear they were the same people speaking the same language, following slightly different religion.

I understand this is controversial theory whose main proponent is professor Finkelstein from Tel-Aviv University. But I find the narrative quite convincing.

There is a community on the web, http://groups.yahoo.com/group/canaanitepaganism/?yguid=192651149, their theme is just the old Jewish paganism (canaanite?). Surely, you'll find there all these old gods, including Lord El and Lady Asherah.

There were multiple deities.

(There is a wikipedia article on it if you want more detail and additional sources: https://en.wikipedia.org/wiki/Ancient_Semitic_religion )

Short version, there were the Els which were the children of the Father god - referenced briefly in Genesis as the 'sons of god' who bred with humanity, often to be claimed as founding components of various cities of the region. (Their names appear throughout the bible), such as El Shaddai: God of Might, El Ohim: Creator God, El Eylon: God of Melchizedek & Salem, and a number of others. There were others such as YHWH (god of Abraham's tribe), Qanna (god of jealousy), and Lucifer (god of prosecution and the morning star).

The majority of these gods were later rolled into one god (with the exception of Lucifer) to create the modern Abrahamic god that we all know and some love.

(Note: List of gods may not be not exact. Some are called out in ancient documents, but others are extrapolated from knowledge of the existence of the roll-up process and its results. Multiple historical events resulted any history of Israel's polytheism largely have been actively and intentionally destroyed.)

As a note, the roll-up process was a result of the unification of Israel which was once an un-associated group of regional warlords who, in order to stand against external invading nations, banded together and intentionally merged their religions and mythologies into one, including creating an shared origin myth of slaves escaping Egypt (which archeology has debunked. - Wikipedia article for followup: Wikipedia-Ancient-Israel-History, possibly to explain their rebellion against Egyptian over-lordship to establish their own territory.))

Not the answer you're looking for? Browse other questions tagged ancient-history religion or ask your own question.

61
Which came first: polytheism or monotheism?
24
What is the last historical mention of people worshipping the Roman gods?
11
How long did belief in the Egyptian sun god Ra last?
5
On the history of Jewish places of worship
86
Why do western monotheistic religions seem to be so full of conflict over dogma?
13
What did the ancient Eastern world think of the ancient Greeks?
5
Have historians attempted to reconstruct the polytheistic Semitic pantheon, dividing it into sub pantheons?