When did the allied "Desert Air Force" in North Africa smash Axis armour?

In the answers to this question, it is mentioned that allied air power "smashed" Axis armour in North Africa. Is there a major battle at which it occurred? Or did it happen during a longer interdiction campaign ?

My research has shown some examples so far of the activity of the Desert Air Force: 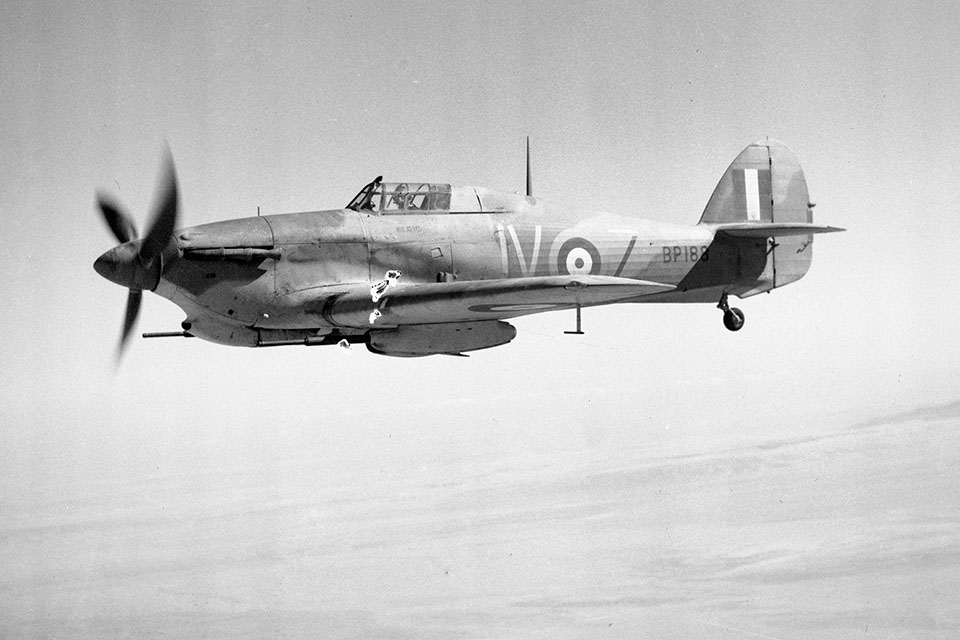 From 'Myth of the Tankbuster' (HistoryNet)

[T]he RAF was the first air force to field a dedicated anti-tank airplane, the Hawker Hurricane Mark IID, armed with two Vickers S 40mm cannons firing tungsten-tipped rounds. First in action at Bir Hakim in June 1942, No. 6 Squadron’s pilots quickly discovered one of the key disadvantages of going into combat with weaponry for which their aircraft were not specifically designed. On 6 Squadron’s second encounter with suitable ground targets, two German trucks were shot up (“one flamer”), but groundfire brought down one of the three attacking Hurricanes, the pilot escaping by parachute. Another had to make a forced landing. The bulky wing-mounted 40mm armament reduced the aircraft’s speed to 210 mph, making it very vulnerable to anti-aircraft fire and aerial interception. Later, the addition of 350 pounds of extra armor in the Hurricane IVD slowed the plane down even more.

Despite these difficulties, the anti-tank Hurricane seemed to do well at El Alamein: By October 1942, there were five Hurricane IID squadrons in North Africa, and the most proficient of these, the by-then veteran 6 Squadron, claimed 43 German tanks destroyed for the loss of nine aircraft by the end of that month. Thus, for October 26, the Squad­ron Operation Record Book announced (using Allied equivalents for Axis armor): “Another most successful operation, the Squadron being credited with two Honeys [light tanks], two Crusaders [medium tanks], one unidentified tank, five armored cars, one semi-tracked vehicle and one lorry. A very good show!” But a couple of weeks later, Advanced Air Headquarters Western Desert was complaining that there was now nothing for the Hurricane IIDs to shoot at—“the inherent weakness of a specialist force.”

There is no confirmation from the German side of the effectiveness of the Hurricane IID and IVD.

The land fighting suddenly flared up again at the end of August when Rommel, realising our growing strength, decided to make a last bid to break through to Alexandria. Some fierce clashes took place, especially round Alam el Halfa, but with his moves anticipated and in the face of a vigorous defence, the enemy onslaught failed to make any real progress; and within a week the battle was over. During the fighting the RAF made a strenuous and sustained effort in support of the Eighth Army. On the eve of the enemy attack, Coningham told his men: ‘The battle is on. Good luck in your usual brilliant work. This defensive land fight for Egypt will be followed later by an offensive and then away we go. Meanwhile go for him in the air whenever you can.’ And go for him they did. In five days Desert Air Force flew over 3000 sorties. Fighters held the ring over the battlefield and protected our troops from the Luftwaffe—now making a somewhat belated effort— while bombers, fighter-bombers and fighters alike hammered away at enemy troops and armour. Bunched up by the pressure of our artillery and tanks, these latter offered a superb target and it was most effectively dealt with. ‘The continuous and very heavy attacks of the R.A.F.,’ says Rommel, ‘absolutely pinned my troops to the ground and made impossible any safe deployment or advance according to schedule.’ And General Bayerlein, Chief of Staff of the Afrika Korps, afterwards declared: ‘Your air superiority was most important, perhaps decisive …. We had very heavy losses, more than from any other cause.’

"… the first and most serious danger which now threatened us was from the air. This being so, we could no longer rest our defence on the motorised forces used in a mobile role, since these forces were too vulnerable to air attack. We had instead to try to resist the enemy in field positions which had to be constructed for defence against the most modern weapons of war."

Tank and armored vehicles were main difference between WW2 and WW1, and major technological breakthrough that make us think about WW1 as static and WW2 as mobile war(fare). This was recognized during WW2 itself, and there was a large focus on destroying or disabling enemy armored formations. Aircraft, as another technical novelty, was considered as an tank buster. However, there were difficulties.

At the beginning of the war, aircraft were armed with classical unguided bombs of various weight. Tanks were small, relatively well armored and often moving targets. Therefore, aerial attacks on them were not easy. They were usually performed from shallower or steeper dive, and even with larger bombs had to be within dozen or so meters from the target to have an effect. Considering poor bomb-sights (or no bomb sights at all) on most fighters and fighter-bombers this required considerable precision. To rectify this, anti-tank bomblets (like this Soviet PTAB bomb) were developed. Working principle was simple, plane would drop them over an area hoping that some of them would land directly on enemy tanks and destroy or disable them with their relatively small but powerful shaped charge. This worked best against formations, but attacking plane had to fly low (thus exposing itself to anti-aircraft artillery), otherwise dispersion of the bomblets was high. Next, we have unguided rockets (like HVAR), on the surface potentially devastating against tanks, but in reality to imprecise to be effective. Again, pilot would need to go really close, but at that range it would be more effective to simply use bombs. Finally, higher-caliber guns were mounted on some aircraft (like Hurricane Mk IV with 40 mm Vickers S guns) . Again, theoretically these would be good anti-tank weapons. In reality, recoil and dispersion were high, so pilot again had to go really close into the teeth of anti-aircraft defense. Plus, such tank busting aircraft were usually heavier and slower then their regular counterparts, making them better target both for AAA and fighters. While Hurricane IV pilots did claim 47 tanks destroyed (both German and Italian) in North Africa, this is very doubtful as tank kills by aircraft were enormously inflated in WW2.

So what did Desert Air Force achieve ? Role of the aircraft in North Africa was primarily to disrupt logistic chain . Attacking ships and aircraft that brought supply to Axis in Northern Africa left Rommel both without fuel and without replacement vehicles (and some other stuff) . And again, supply dumps were targeted, as well as convoys consisting of soft-skinned trucks and other vehicles. As a result, Axis were not able to withdraw their mechanized forces from El Alamein. Instead, they were obliged to defend this position in set-piece battle of attrition which favored Allies. Most of the surviving German and Italian tanks were destroyed by their crews when they run out of fuel or ammunition, and this goes for other vehicles.

Not the answer you're looking for? Browse other questions tagged world-war-two british-empire aircraft desert or ask your own question.

19
Do any historians consider superior German airpower as the most important factor in the Battle of France?

12
When did the Luftwaffe lose air-superiority over the Reich?
30
Was the Italian campaign a strategic mistake?
12
Which Allied aircraft scored the most air-to-air kills against the Me 262 in WWII?
10
Was WWII Systemic Drug Use by Axis and Allies Supported By Scholarship?
1
Were Allied high commanders that bad at the end of WW2?
29
Why did the Allies Invade French North Africa?
6
How important was the Suez Canal to the Allies during WWII?
1
Did Stukas support Schmalz Panzer corps and what about air interdiction?