Are there contemporary records of why flappers used cosmetics to create thin, upturned eyebrows? 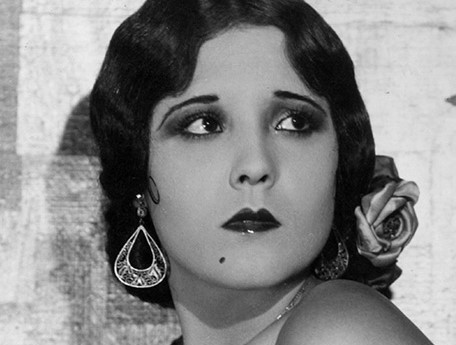 What were young women trying to express when they applied cosmetics in this style? The cartoon character Betty Boop has a similar look, which could convey any number of things: hesitation, girlishness, dreaminess, being starstruck. Thus far I can not find any first hand information on what exactly movie stars and flappers of the 1920's were trying to express.

In order to avoid a subjective answer, I have read a few diaries and memoirs written by women of this era to find first hand accounts, but so far they have not yielded anything specific. Next I found books about the history of cosmetics, which initially looked promising. Unfortunately they only detail the products and methods needed to obtain the look in question.

This particular ‘look’ was used by early film stars, who popularized the use of cosmetics among their fans. If their fans were trying to emulate movie stars, then what were the stars themselves trying to achieve?

The expression shown above is meant to convey sweetness and naivety. It represents the ingénue, a role that was popular in early film, which depicts an unsophisticated yet charming young woman. The ingenue served as a contrast to femme fatale characters, or the ‘vamp’ archetype. By the late 20’s these two roles evolved with changing tastes, resulting in characters who possessed both the youthful charm and modern sophistication that defined the flapper image.

Throughout the early 20th century, two significant changes contributed to the popularity of the ingenue 'look'. First was the rise of cinema, which depicted actresses in heavy makeup to enhance their features on grainy black and white film. Second, cosmetics became more acceptable to wear than in previous years. They had also become increasingly compact and easier to transport. With cosmetics stands appearing in department stores and the popularity of mail-order catalogs, one could purchase these products with ease.

Mary Pickford was an early ingenue darling of the silver screen. Replete with tilted eyebrows and long, golden hair, Pickford was 15 when she was hired by D.W. Griffith at Biograph Studios.

So he put on my makeup, the first motion picture makeup I ever had. I looked like Pancho Vila. He put enormous black eyebrows on me. In those day we used to wear chalk white makeup, and our eyes and mouths were greatly exaggerated. Of course, we had no sound so pantomime was the order of the day.

Pickford already had a natural ingenue look, so the cosmetics she used for film to create drooping arches only enhanced the ‘innocent, guileless’ expression her characters were meant to convey. But flowering alongside the innocent darling type was a sharper, more mature role- the ‘vamp’. Pickford recalls:

After Theda Bara appeared in A Fool There Was, a vampire wave surged over the country. Women appeared in vampire gowns, pendant earrings, and even young girls were attempting to change from frank, open-eyed ingenues to the almond-eyed, carmine-lipped woman of subtlety and mystery.

The actress Lilian Gish, also of Biograph Studios, was another of Griffith’s popular ingenues. Neither actress was totally satisfied playing the innocent types. Gish was quoted as saying,

Those little virgins, after five minutes you got sick of playing them. To make them more interesting was hard work.

By the early 20’s thinly plucked eyebrows represented the modern woman. In a story written by Sophie Kerr for the popular Ladies Home Journal, the new style was depicted in the character of Virginia Tracy.

Virginia Tracy was a saleswoman in one of the supremely fashionable gown shops, and she looked like a fairy tale girl. She had the first bobbed hair and plucked eyebrows in the city, I do believe, and she was always a minute ahead of the style. She was slender and wistful looking, with dreamy, gray-blue eyes.

In the 1927 film “It” actress Clara Bow merged the two roles of innocent sweetheart and beguiling go-getter into one. She played the role of a shop girl who is sweet but also coy and scheming, even if clumsily so. The film made Bow an international star, and her image could be found in magazines now solely devoted to celebrity and Hollywood culture, right beside advertisements for cosmetics; Clara Bow was driving makeup sales.

When fans found out that she used henna, sales of the hair dye tripled. Women plucked their eyebrows and kohled their eyes to imitate her wide eyed ingenue look.

She has been a sensational hit in her German pictures. I do not have her play silly little cuties. She plays real women, and plays them marvelously.

It was the sharp, urban woman with cropped hair and sultry makeup that came to define the flapper image we know today. But the ingenue was the initial appeal, an invitation to young women to try out cosmetics, if only to imitate glamorous movie stars of the era. Contemporary records of young women describing this desire exist, I’m sure, in diaries and personal journals. But I believe they are either hidden away on archives not accessible to me, or they are too obscure to exist on the internet.

About Face: The emergence, evolution, and demise of the decorative compact. http://www.americanpopularculture.com/archive/style/compact.htm

Compacts and Cosmetics: Beauty from Victorian Times to the Present Day by Madeleine Marsh, Remember When, 2009

Their European Souls: Some Stars’ Spirits Flower Only Abroad, by Cedric Belfrage, 1930 http://archive.org/details/motionpicture39moti/page/n87/mode/2up

38
Why are military uniforms often flared or poofy above the knee?
7
Why was there a surge of writings about the Illuminati in America in the late 1910's?
6
Why are women banned from Okinoshima island in Japan?
16
What (primary) sources are there on the life of female slaves in Classical Greece, more specifically Athens?
8
Are there sources that record ancient women in patriarchal societies' thoughts about patriarchy?