Was there an assassination attempt against Xerxes in the battle of Thermopylae?

I watched Frank Miller's 300 last night with my girlfriend, and after the movie ended she mentioned the assassination attempt against Xerxes would have been a great plot element for the movie and that it was a shame they didn't include it. I protested that the Greeks never attempted to assassinate Xerxes at Thermopylae, but she insisted. The Wikipedia article doesn't mention anything relevant, but she still insists.

I know my question may be dismissed as hearsay, but are there any sources that include a story about the Greeks attempting to assassinate Xerxes, or something similar? Are there any lesser known alternative versions of the battle in general? And if so, what version do the archaeological evidence support?

We've found out where my girlfriend had heard of the story, it was used as a plot element in 1962's The 300 Spartans. Leonidas and a few of his men sneak in the Persian camp right after they reach Thermopylae, in an attempt to end the invasion with one kill. Although they reach Xerxes' tent with extreme ease, they don't find the king in it (he was visiting the queen at the time) and the Spartans return to their base.

Herodotus' Histories is the primary source for the second Persian invasion of Greece, which started with the famous1 Battle of Thermopylae in 480 BC. Herodotus describes the battle in Book 7 (Polymnia) of the Histories, starting at paragraph 175:

The Greeks, on their return to the Isthmus, took counsel together concerning the words of Alexander, and considered where they should fix the war, and what places they should occupy. The opinion which prevailed was that they should guard the pass of Thermopylae; since it was narrower than the Thessalian defile, and at the same time nearer to them. Of the pathway, by which the Greeks who fell at Thermopylae were intercepted, they had no knowledge, until, on their arrival at Thermopylae, it was discovered to them by the Trachinians. This pass then it was determined that they should guard, in order to prevent the barbarians from penetrating into Greece through it; and at the same time it was resolved that the fleet should proceed to Artemisium, in the region of Histiaeotis, for, as those places are near to one another, it would be easy for the fleet and army to hold communication. The two places may be thus described.

Thus two brothers of Xerxes here fought and fell. And now there arose a fierce struggle between the Persians and the Lacedaemonians over the body of Leonidas, in which the Greeks four times drove back the enemy, and at last by their great bravery succeeded in bearing off the body. This combat was scarcely ended when the Persians with Ephialtes approached; and the Greeks, informed that they drew nigh, made a change in the manner of their fighting. Drawing back into the narrowest part of the pass, and retreating even behind the cross wall, they posted themselves upon a hillock, where they stood all drawn up together in one close body, except only the Thebans. The hillock whereof I speak is at the entrance of the straits, where the stone lion stands which was set up in honour of Leonidas. Here they defended themselves to the last, such as still had swords using them, and the others resisting with their hands and teeth; till the barbarians, who in part had pulled down the wall and attacked them in front, in part had gone round and now encircled them upon every side, overwhelmed and buried the remnant which was left beneath showers of missile weapons.

Excavations in the general area in 1939 by Spyridon Marinatos2 revealed a large number of bronze and silver spearheads and arrowheads in Kolonos hill, verifying (to some extend) Herodotus' account of the last stand. The finds are consistent with contemporary Persian / Asian designs of the era, and today can be seen in the National Archaeological Museum of Athens: 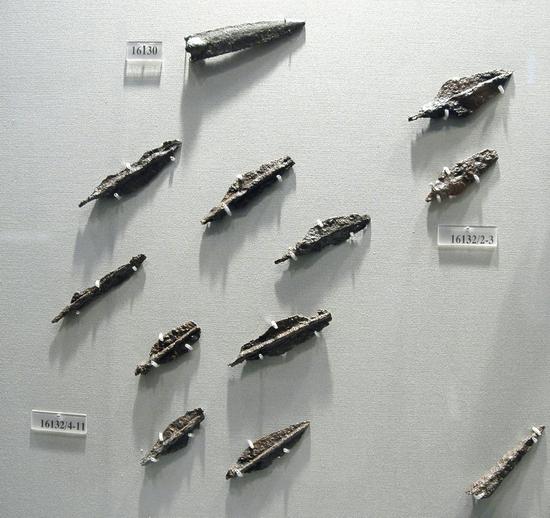 The story of the assassination attempt against Xerxes comes from Diodorus Siculus' Bibliotheca historica. His general account of Xerxes' campaign is (more or less) consistent with Herodotus', but his version of the battle (book 11, chapters 5-11) is different:

[11.10.1] The soldiers, then, in accordance with the orders given them, forming in a compact body fell by night upon the encampment of the Persians, Leonidas leading the attack; and the barbarians, because of the unexpectedness of the attack and their ignorance of the reason for it, ran together from their tents with great tumult and in disorder, and thinking that the soldiers who had set out with the Trachinian had perished and that the entire force of the Greeks was upon them, they were struck with terror.

[11.10.2] Consequently many of them were slain by the troops of Leonidas, and even more perished at the hands of their comrades, who in their ignorance took them for enemies. For the night prevented any understanding of the true state of affairs, and the confusion, extending as it did throughout the entire encampment, occasioned, we may well believe, great slaughter; since they kept killing one another, the conditions not allowing of a close scrutiny, because there was no order from a general nor any demanding of a password nor, in general, any recovery of reason.

[11.10.3] Indeed, if the king had remained at the royal pavilion, he also could easily have been slain by the Greeks and the whole war would have reached a speedy conclusion; but as it was, Xerxes had rushed out to the tumult, and the Greeks broke into the pavilion and slew almost to a man all whom they caught there.

[11.10.4] So long as it was night they wandered throughout the entire camp seeking Xerxes—a reasonable action; but when the day dawned and the entire state of affairs was made manifest, the Persians, observing that the Greeks were few in number, viewed them with contempt; the Persians did not, however, join battle with them face to face, fearing their valour, but they formed on their flanks and rear, and shooting arrows and hurling javelins at them from every direction they slew them to a man. Now as for the soldiers of Leonidas who guarded the passes of Thermopylae, such was the end of life they met.

Diodorus source for the battle seems to be an earlier historian, Ephorus, and while Herodotus doesn't mention the night attack, Diodorus mention of "shooting arrows and hurling javelins at them from every direction" is consistent with both Herodotus' account and Marinatos' findings. Plutarch attests that the night attack happened in his polemic On the malice of Herodotus, and blames Herodotus for obscuring Leonidas bravery:

32. Now Herodotus, in his narration of that fight, hath obscured also the bravest act of Leonidas, saying that they all fell in the straits near the hill.* But the affair was otherwise managed. For when they perceived by night that they were encompassed by the barbarians, they marched straight to the enemies’ camp, and got very near the King’s pavilion, with a resolution to kill him and leave their lives about him. They came then to his tent, killing or putting to flight all they met; but when Xerxes was not found there, seeking him in that vast camp and wandering about, they were at last with much difficulty slain by the barbarians, who surrounded them on every side. What other acts and sayings of the Spartans Herodotus has omitted, we will write in the Life of Leonidas; yet that hinders not but we may here set down also some few. Before Leonidas went forth to that war, the Spartans exhibited to him funeral games, at which the fathers and mothers of those that went along with him were spectators. Leonidas himself, when one said to him, You lead very few with you to the battle, answered, There are many to die there. When his wife, at his departure, asked him what commands he had for her; he, turning to her, said, I command you to marry good men, and bring them good children. After he was enclosed by the enemy at Thermopylae, desiring to save two that were related to him, he gave one of them a letter and sent him away; but he rejected it, saying angrily, I followed you as a soldier, not as a post. The other he commanded on a message to the magistrates of Sparta; but he, answering by his act, took his shield, and stood up in his rank. Who would not have blamed another that should have omitted these things? But he who has collected and recorded the fart of Amasis, the coming of the thief’s asses, and the giving of bottles, and many such like things, cannot seem to have omitted these gallant acts and these remarkable sayings by negligence and oversight, but as bearing ill-will and being unjust to some.

Given that our only archaeological evidence is the arrowheads and spearheads Marinatos found, both versions are plausible, since both describe the last stand quite similarly.

Not the answer you're looking for? Browse other questions tagged ancient-greece classical-greece greco-persian-wars assassination or ask your own question.

8
What were the six Mubarak assassination attempts?
5
What was the first assassination/murder recorded on film?
4
What role did War elephants play in the battle of Thermopylae?
22
Was the assassination of Franz Ferdinand in 1914 captured on film?
3
How was the Spartan "300" battle recorded?
5
What was the attitude of leaders of the Ionian Greeks towards Persia?
30
Did the Persian Immortals instill fear in their Greek adversaries?
3
How was Herodotus able to get accounts of the Battle of Thermopylae?
10
What were the Ethiopians doing in Xerxes' army?
9
Has there ever been any assassination so that another assassination could happen during the first one's funeral?