How effective was Civil War-era artillery in the rain?

How did rain effect cannon of the mid-19th century? Specifically the commonly fielded types like the 12-pounder Napoleon. Could they operate effectively and reliably in heavy rainfall?

I’ve been able to find information on the effectiveness of various small arms in inclement weather, but not anything useful on the big guns.

The book The Artillerist's Manual By John Gibbon, from 1860 gives us some insight into what was in use at the time. A clip from the appendix page 13 shows the components of an ammo box distributed with 12-pound guns and Howitzers. 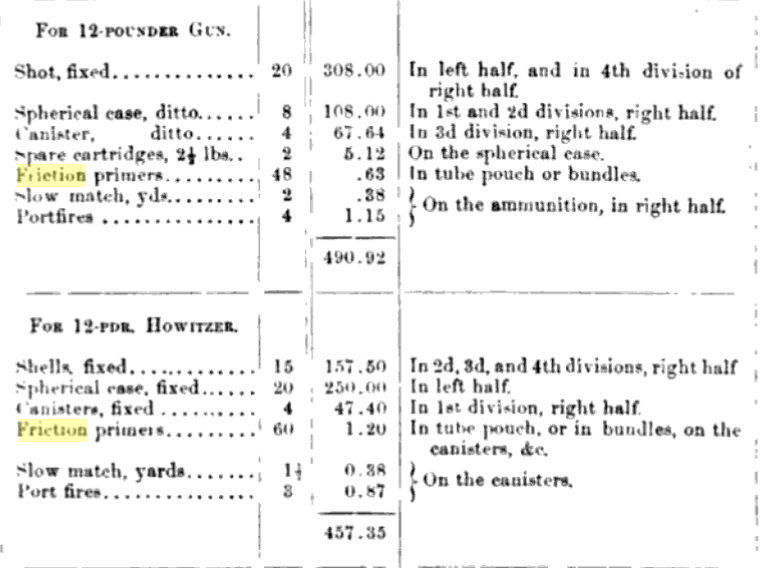 The last three items on the list are included to provide various means of firing the weapon; the friction primer, the slow match, and the portfire.

The friction primer was probably the primary item used by this time to detonate the cannon charge. Note the packs of 48 and 60 included in these packages. These were self-contained and packed in their own container to keep dry and ready. They operated by friction, so a pull on a lanyard would set off the priming powder. No external spark necessary. From a NPS website:

The device was a copper tube (fig. 19) filled with powder. The tube went into the vent of the cannon and buried its tip in the powder charge. Near the top of this tube was soldered a "spur"—a short tube containing a friction composition (antimony sulphide and potassium chlorate). Lying in the composition was the roughened end of a wire "slider." The other end of the slider was twisted into a loop for hooking to the gunner's lanyard. It was like striking a match: a smart pull on the lanyard, and the rough slider ignited the composition. Then the powder in the long tube began to burn and fired the charge in the cannon. Needless to say, it happened faster than we can tell it! 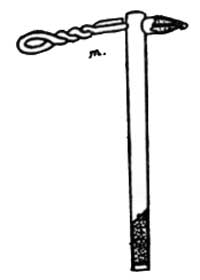 The next two items would have served as backup in case of problems with the friction primers or they ran out.

The slow match was an older technology, and might have been more susceptible to moisture issues, as it required direct contact to some form of cartridge fuse or priming powder. From the same NPS website:

Before 1800, the slow match was in universal use for setting off the charge. The match was usually a 3-strand cotton rope, soaked in a solution of saltpeter and otherwise chemically treated with lead acetate and lye to burn very slowly—about 4 or 5 inches an hour. It was attached to a linstock (fig. 18), a forked stick long enough to keep the cannoneer out of the way of the recoil.

PORTFIRE: A composition of nitre, sulphur, and mealed powder driven into a case of strong paper. Portfire was used to fire guns previous to the introduction of the friction primer. It was also used in emergency situations and to fire rockets. A full length portfire would burn for about ten minutes and could not be extinguished by water.

So of the several options discussed in the 1860 book linked above, most had some degree of functionality in adverse weather conditions.

Not the answer you're looking for? Browse other questions tagged military 19th-century american-civil-war artillery or ask your own question.

18
Was the Napoleonic era cavalry armour effective against firearms?
28
Was the American Civil War the “bloodiest civil war in history”?
15
What is the longest effective range artillery weapon ever built?
4
How effective were siege guns and gun boats compared to field artillery in the 19th century?
9
During the American Civil War, were cavalry units issued horses?
10
How did the Dred Scott Decision contribute to the Civil War?
2
How accurate was rocket artillery in the 18th and 19th centuries?
5
Origin of the Petropavlovsk artillery company
5
How professional and well equipped were US Civil War soldiers?
1
How to make sense of Civil War regiment reports?