In this cartoon from Puck, what indicates the identities of France and Britain? 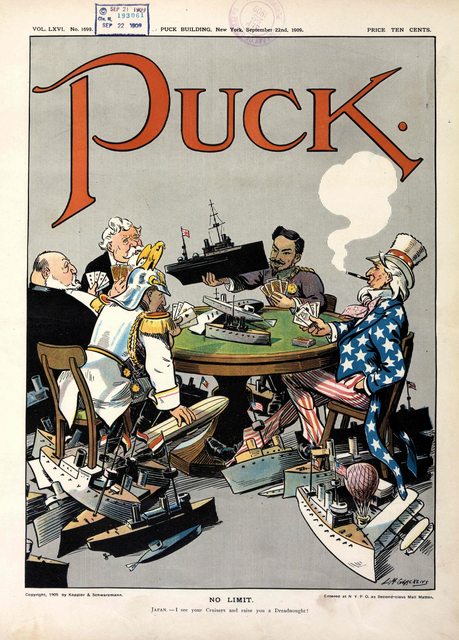 According to Wikipedia, the participants in the naval arms race depicted in this cartoon are (clockwise, starting from the man in the blue jacket) the United States, Germany, Britain, France, and Japan. Three of them are easy to identify:

But what features should I be looking at to identify the two figures on the left as "Britain" and "France"? To me, they're not national caricatures the way the other three are, they're just generic rich men.

The identities of France and Britain are indicated by their heads of state, namely President Armand Fallières and King Edward VII respectively. There is also (as Roddy of the Frozen Peas observed in his comment above) a French flag on one of the ships near the French President.

The image appeared on the cover of the September 22, 1909 issue of Puck. Sources online, including the Library of Congress (LOC) and Anne Shannon's Finding Japan: Early Canadian Encounters with Asia (2012) state that they are King Edward VII and French President Émile Loubet. According to the LOC,

Illustration shows a high-stakes poker game with Uncle Sam, William II, the German Emperor, Meiji, the Emperor of Japan, Emile Loubet, of France, and Edward VII, King of Great Britain; the emperor of Japan is raising the bid by one battleship.

However, as sempaiscuba has observed in his comment above,

They appear to be caricatures of Edward VII and Armand Fallières

The Puck image cropped. Not much doubt about King Edward VII on the left, but the gentleman on the right looks like Armand Fallières, not Émile Loubet. 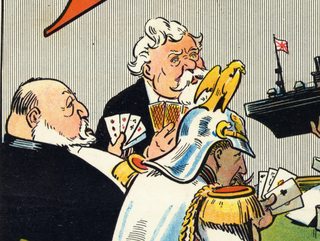 This is a photo of Armand Fallières: 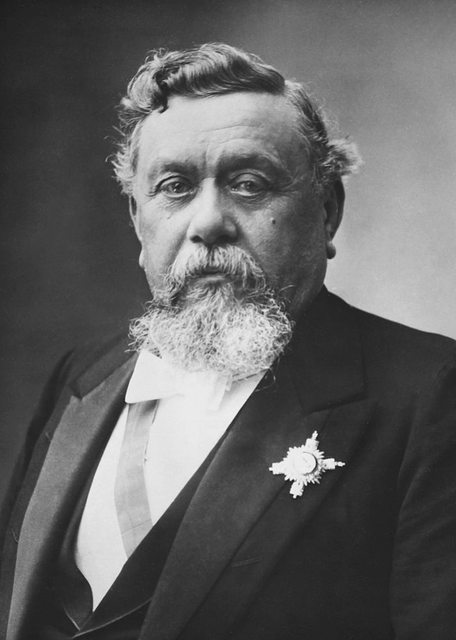 …who has a much closer resemblance to the Puck caricature than Emile Loubet (below): 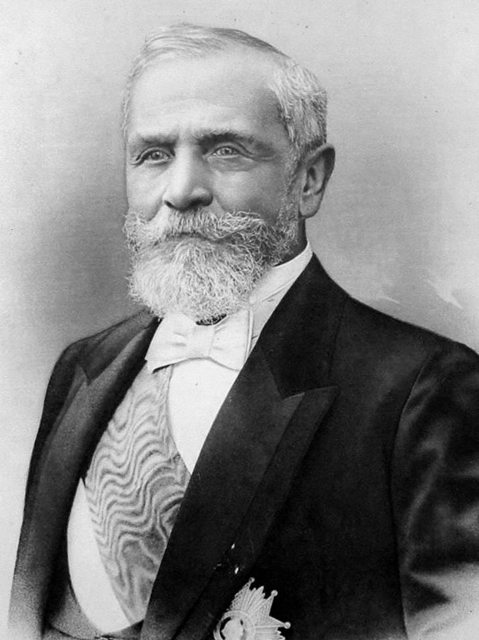 What follows is somewhat speculative, but is included in the light of the comments at the end of this post, several of which have made interesting points and / or raised interesting questions.

Why France and Britain are clearly (and Japan and Germany seemingly) represented by their heads of state whereas the United States has Uncle Sam, a personification of the federal government, is unclear and could probably only be definitively answered by now the long-deceased illustrator.

Perhaps the easiest way to approach this is to consider some possibilities as to why national personifications were not used for the others. Cartoonists need to use images to which their audience can easily relate. Thus, Uncle Sam was an obvious choice for the artist (though he might have used Columbia had the context been more positive context).

For Japan, how many would have known the national personification? A stereotyping caricature bearing some resemblance to the then emperor seems a more logical choice. For Germany, the uniform and flags are effective identifiers as the seating arrangement allows only a rear/side view of the face.

For Britain, why not use Britannia or John Bull? For the latter, perhaps because he

is usually depicted as a stout, middle-aged, country-dwelling, jolly and matter-of-fact man.

Perhaps not enough of a 'war-monger' image? Britannia was often used in Puck (sometimes with Columbia) but the contexts seem mostly positive or at worst neutral. Edward VII, on the other hand, openly supported building more dreadnoughts and disliked and worked against his nephew, Kaiser Wilhelm II.

A little more difficult to explain is why Marianne was not used to represent France (as she was in this 1911 Puck cartoon by a different illustrator, Udo J. Keppler). Perhaps, for L.M. Glackens, she was associated as much with the ideals of the republic as with the nation? Or perhaps Armand Fallières was depicted simply on the basis of 'guilt by association', association, that is, with the promotion of the Triple Entente of Britain, France and Russia. Fallières met King Edward during an official visit in 1908.

Note: I have emailed the LOC to suggest that they have another look at their identification of the French president

Not the answer you're looking for? Browse other questions tagged 20th-century identification symbols or ask your own question.

29
What is this household object from early 1900s rural Russia?
19
What was this small state in the south of France in 1789?
8
From what time can this jewelry date?
1
What kind of knife is this and where is it from?
30
What are the text and subtext of this 1949 Soviet cartoon?
5
Does anyone recognize this signature from Lord Rayleigh's “The Theory of Sound”?
4
What does this image symbolize or mean and who is in the image?
8
What are the flags in this Yellow Peril Cartoon from Italy?