What was the estimated malaria death toll for US Forces during World War II?

Recently I run onto an article listing 10 most deadliest epidemics in the human history, this contradictory article was from Russian website that looks rather low quality, but what attracted my focus is one number in Malaria chapter of their list. Literally they say:

Almost 60000 of American soldiers died from this disease in Africa and in southern part of Pacific ocean during the World War II.

Also this English article cites this number but the website again looks low quality and unreliable.

This was very surprising for me that such routine disease easily curable now had such enormous death toll in the WWII.

I started to search and found no mentions of such casualties in the Asiatic-Pacific Theater of WWII. The starting point of my search was US casualties page of Wikipedia which cites 291,557 combat deaths and 113,842 deaths from other causes but gives no differentiation from which causes.

I found many science publications about malaria in US troops during WWI (example), but nothing specifically about WWII. This PubMed article about history of malaria in US Naval Forces puts number of 113,256 cases and only 90 deaths. The number 113,256 looks very similar to non-combat casualties from Wiki page which is 113,842. Coincidence? I suppose yes.

Are there any reliable sources about malaria death toll during World War II? Were they so enormous like it is described in those articles? I doubt.

The figure of 60,000 fatalities due to malaria seems ridiculously high.

The figures published by the Medical Departments of the various United States armed services in the years after the war provide a figure in the hundreds, rather than in the tens of thousands.

I haven't been able to locate figures for fatalities due to malaria in the U.S. Army Air Forces (USAAF) (which may be included with those for the US Army above, or which may have been reported separately under the auspices the US Air Force after the war) and US Coast Guard between 1942 and 1945, but it seems highly unlikely that those would bring the total anywhere near that quoted in the article you cited.

Chapter XVII of The Medical Department of the United States Army in World War II, Vol II Infectious Diseases (available on Google Play) deals with the treatment of malaria during the war. The figures presented in the text are much lower, suggesting a total number of fatalities in the hundreds, rather than the tens of thousands.

The Defense Technical Information Center publication Internal Medicine in World War II. Volume 2. Infectious Diseases states that there were 302 deaths of US Army personnel due to malaria in the period 1942-45, 10 of which were within the United States (p460).

Table 61 in the text presents a breakdown of that total, and is reproduced below: 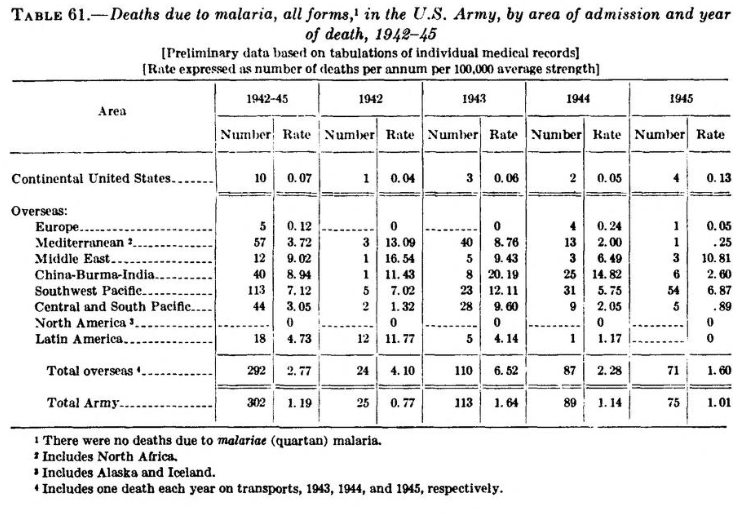 US Navy / US Marine Corps

Appendix table 1 contains a breakdown of "noncombat injuries" (which includes those suffering from various diseases, including malaria). According to that table (the relevant section of which is reproduced below), there were only 87 fatalities due to malaria between 1942 and 1945, although there were almost 90,000 cases treated:

(The fatalities are listed in the column "DD" ("Discharged dead") under "Dispositions during the period".)

For completeness, the meanings of the abbreviations used in the table are explained on page 5 of that volume as follows:

A (new admission), which denotes that the patient was taken up on the sick list from a duty status with a diagnosis which was not causally related to any diagnosis for which previously admitted or was a separate, distinct, and new occurrence of a previous disability.

EPTE (existed prior to entry), which signifies that the patient was taken up under the same circumstances as described for "A" but that the diagnosed condition was considered to have existed in the patient prior to his entry into the naval service.

ACD (admitted contributory disability), denoting- a disability considered to be a complication or sequela of another diagnosis for which the patient had been previously admitted to the sick list.

AD (additional diagnosis), which indicates an additional concurrent or intercurrent disability in a patient who is on the sick list because of some other disability

D (duty) which indicates that the patient was returned to duty.

DD (died), which signifies that the patient died.

That figure of 87 fatalities agrees quite closely with the PubMed article you quoted, while the total number of new admissions (113,744) is very close to the figure of 113,256 in that article.

This would suggest that the anti-malarial drugs employed by the US military during the Second World War were very effective when they able to be administered.

6
Was the death toll in the atomic bombing of Japanese territory greater than was expected by the US?
6
In U.S. military forces, did black soldiers suffer a heavy racial segregation during World War II?
10
What is the death toll attributed to US internment of Japanese-Americans during WWII?
5
What was the death rate of Germans outside Germany's post war border after World War 2?
18
Why was Washington State an attractive site for aluminum production during World War II?
2
When was it considered fact that rats caused the Black Death?
22
What were the effects of the Black Death in the Muslim world?
5
What was the strategic importance of Moscow to the Soviet Union in Dec 1941?
2
How have estimates of the deaths in WWI and WWII changed over time?