Where can I find the original "On the New Rules for Destroying Countries" (1901) by Liang Qichao?

In China, Liang Qichao came up with a different source of reform, the Strong State, after the failure of the Boxer Rebellion in 1901, he wrote his awesomely titled On the New Rules for Destroying Countries.

This was a critique of European imperialism, but it was also a call for a strong, somewhat authoritarian state that could stand up to the west. [joke omitted]

I'm interested in tracking down "On the New Rules for Destroying Countries"(published in 1901) but didn't succeed, which I believe is in Chinese and published in a Chinese journal (see a Google Books result indicates a translation).

His name in Chinese is 梁启超 (or 梁啟超 or 梁啓超). I believe this work was reproduced in the collection 饮冰室合集. Beyond that, I'm not sure where to look.

Question: Where can I find the original "On the New Rules for Destroying Countries" (1901) by Liang Qichao?

The essay is indeed originally in Chinese, with the title 滅國新法論, which may aid further searches. It is collected in full in 《飲冰室合集》, as well as the 《梁啟超文集》 in abridged form.

The abridged version is available online from ctext.org, starting from paragraph 125. Wikisource likewise contains the same document. This version apparently excludes detailed summaries on the five examples of imperialism Liang gave, namely against Egypt, Poland, India, and the Boers, but otherwise retains Liang's actual arguments. This should suffice for most purposes.

The full version appears to be in《飲冰室合集》, which is unfortunately only available in snippet form on Google Books

Turns out《飲冰室合集》has been digitalised by the National Central Library of Taiwan. The essay in question can be found on page 32 (pdf page 34) of volume 3. Here's a screenshot: 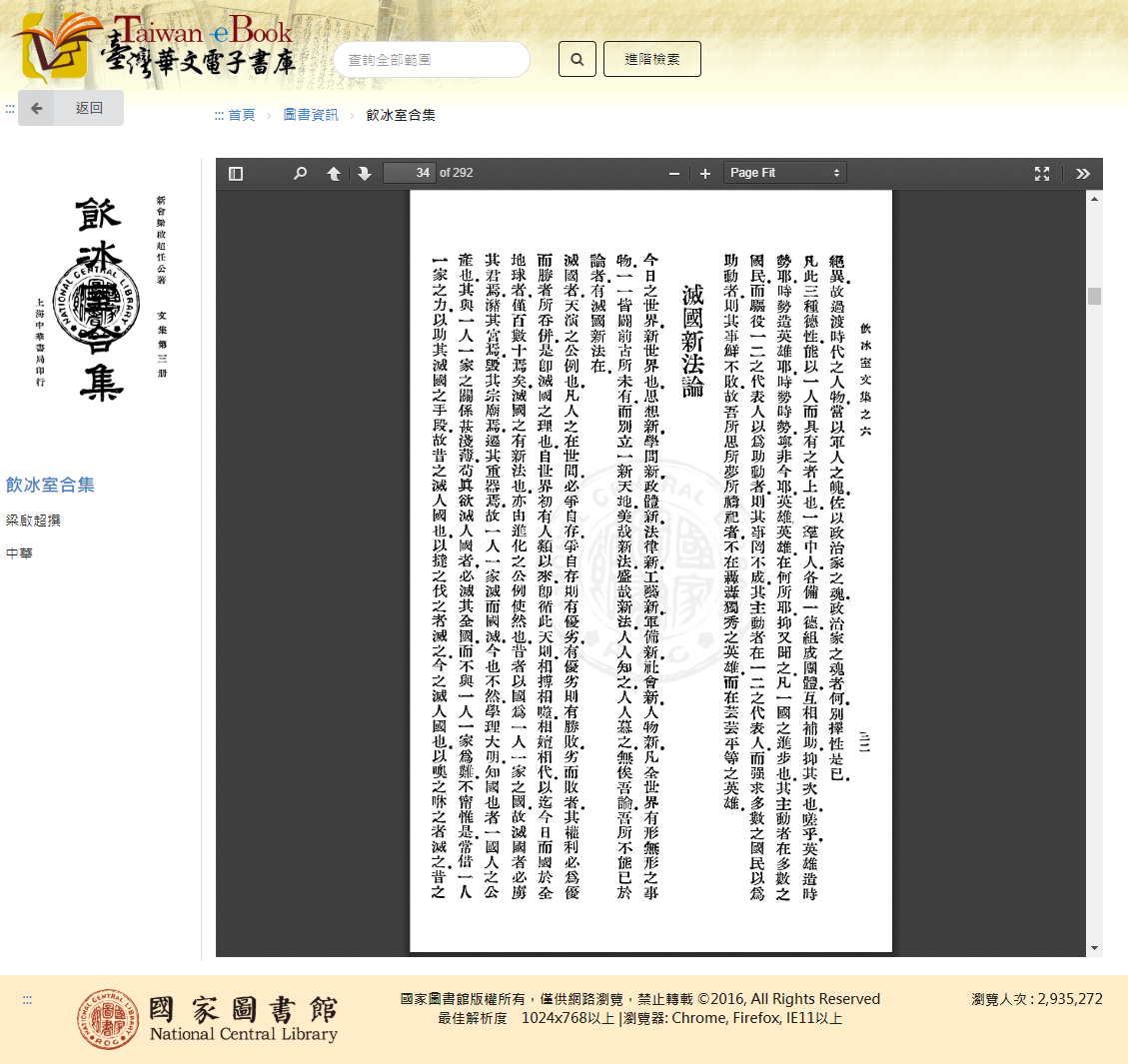 Actually, you can read 滅國新法論 (which Semaphore found) only in Chinese(unfortunately) at this site for free. The full contents is there. I can not read Chinese, so I can not help in anyway so you might need a help may be at Chinese SE.(Well...but nobody would translate the full content and the translation is mostly prohibited in many languages' SEs)

Yet, I would like to make some google translation and copy it here.

The New Law of National Extermination (Excerpt) Author: Liang Qichao July 16-August 24, 1901 July 16, 1901 August 24, 1901 Sister Project Sister Project: Data Items In today ’s world, the new world is also new: new ideas, new learning, new regimes, new laws, new craftsmanship, new armaments, new society, new characters, all the tangible and invisible things in the world, all unprecedented, And don't make a new world. The new law! Sheng Zai new method! Everyone knows it and everyone admires it. What we can't do is to say that there is a new law to destroy the country.

Those who destroy the country, the public law of Tianyan also. In the world, mortals must strive for self-existence, and for self-existence, there are advantages and disadvantages, and there are advantages and disadvantages to victory and defeat. For the inferior and the defeated, their rights must be annexed by the superior and the defeated, which is the principle of destroying the country. Since the beginning of the world, there have been human beings, following this day, fighting against each other, transmuting from generation to generation, only one hundred dozens of those who have been nationwide to this day. There are new ways to destroy the country, which are also caused by the common law of evolution. The former people regard the country as a family of one family, so the country that destroys the country must capture its monarch, ruin its palace, destroy its ancestral temple, and relocate its heavy weapon. Therefore, one person perishes and the country perishes. This is not the case now. The theory is clear. The people who know the country also have the public property of a country. Their relationship with the family is very shallow. Those who really want to destroy the country will destroy the country without embarrassing the family.