How much debt did Italy remit Germany in the London Debt Agreement?

Italy was one of the signatories of the London Debt Agreement in 1953, pardoning part of previous German debts.

Origin of the question: in the recent political discussions on 'Coronabonds', some opinionists and politicians have mentioned these past debts.

Short answer: there is no short answer. It depends on a lot of factors, legal opinions, and definitions. We might look at an initial agreement, and get a number. But that number is difficult to translate into real-world value. And what exactly was included or excluded by that one agreement is, as evidenced by this very question, still a matter of dispute.

Indeed, some money was due Dawes and Young plan credits, result of the First World War, for which Nazi-Germany simply stopped paying early in Hitler's heydays. The exact amount is somewhat difficult to pinpoint exactly for 1952, as there were multiple steps and developments that changed the value of the initial debts. Among them currency changes and official cuts, results of fierce negotiations.

The London conference and debt agreement encompassed all debts. Pre-war credits and actual reparations and eventual reparations, that is wartime debts, this time for the Second World War. Whether or not Italy renounced any rights for either case is a matter of dispute between legal interpretations, of which German officials see the matter as settled for pre-war credits paid back since 2010 and wartime debt to have been even renounced by the Italian state. But the German legal position disregards the London agreement for that matter and instead argues that 'Italy did that' in the 1947 Paris Peace Treaties. An often questioned legal position towards reparations as the German position ignores the individual's right (to sue) (some talking points on that debate). Some of these individual claims have been restituted, most were not. And while obvious theft of Italian property had a good chance of being recognised by German courts and institutions, reparations for simple destruction and war crimes usually were not.

These pre-war debts would amount to 800 Million Reichsmark for the Dawes credit, interest rate at 7% per annum and bound back on Gold standard, due in 1949 as per original agreement. In Italian terms at the time this amounted to 100 million Lira (US: 110 million Dollar)*

As Germany stopped the payments unilaterally the interest rate compounded this problem in the mean time. Some of that was also considered 'paid in kind' with for example Eastern territories, immaterial property rights (patents etc) or the initial plan of 'deforestation' of German industry.

After the war this meant for Italy that it gave 16 million Reichsmark credit that weren't paid back.

The initial breakdown is thus: 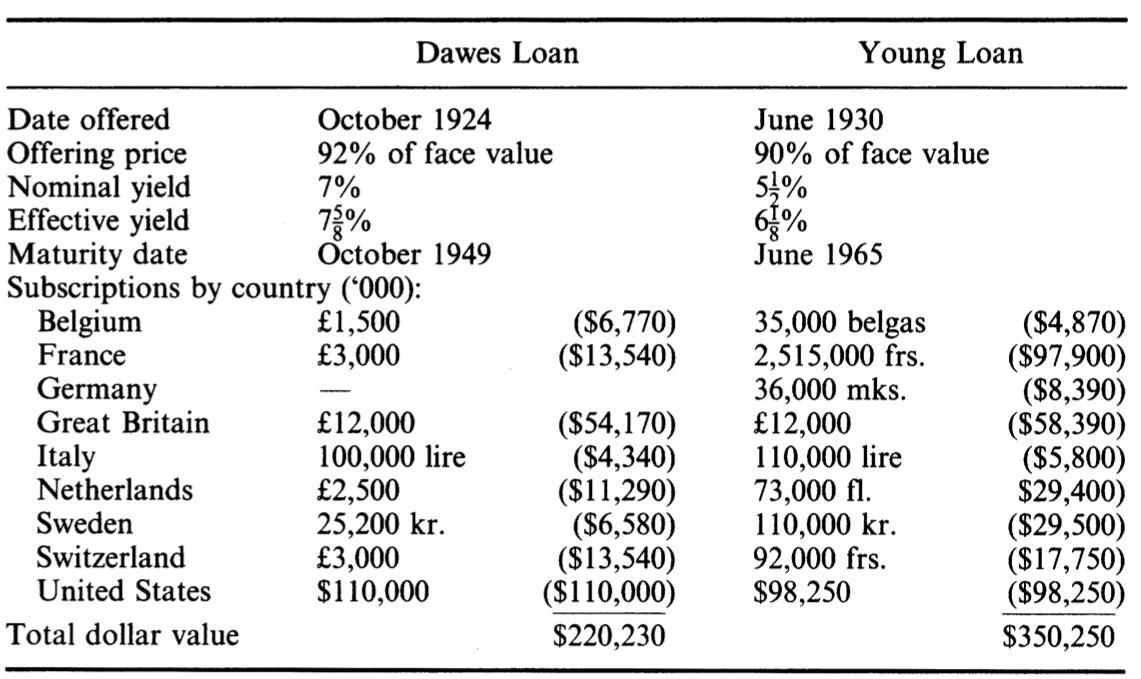 This complicated business is in overview:

with some other neat explanations:
— Joseph Cotterill: "Let’s talk about… the 1953 London Agreement on German External Debts", Aplhaville, Financial Times, 2015.

Tabulated, one such overview would be: 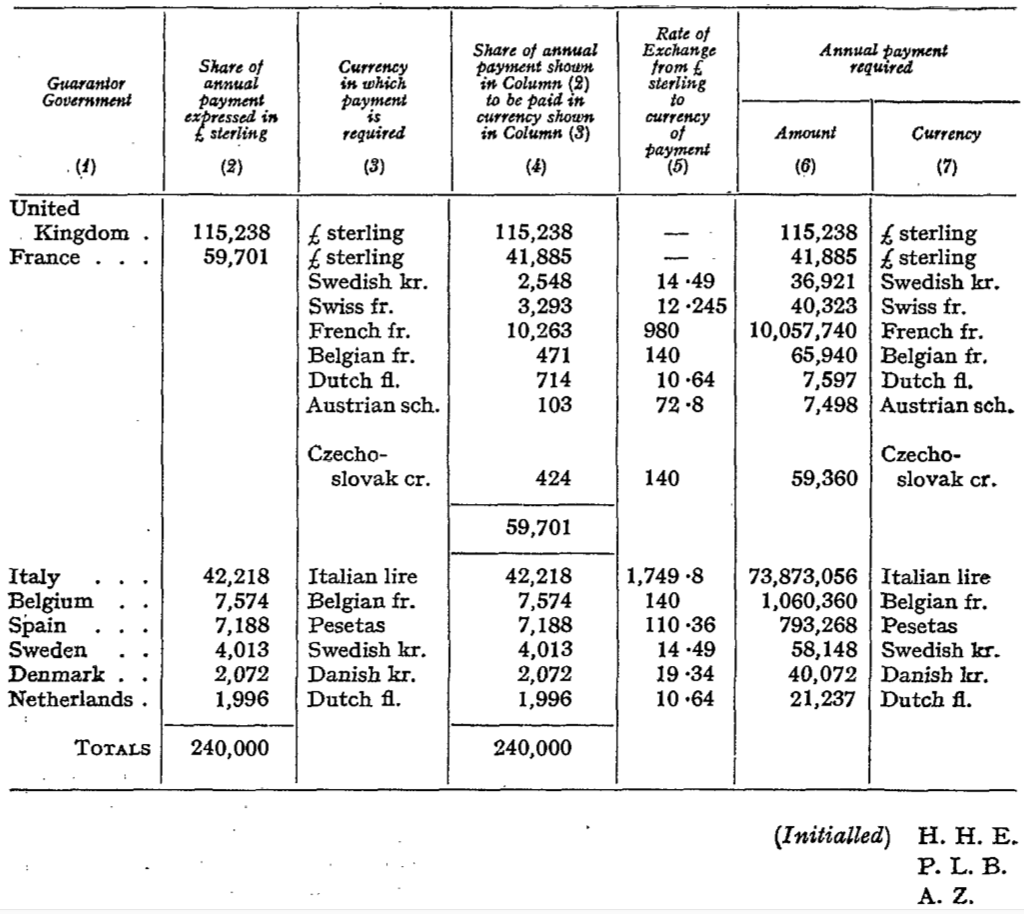 But while the interest rate initially agreed upon in the currency they thought it would be calculated in would mean a very nice windfall for the Italian economy, it turned out to be a problem that this universal gold backing of the debts was changed to dollar-backing and nominal calculations. The Italian Lira lost much of its value in the meantime and thus reduced the potential benefit tremendously. For dollar debt and Swiss Franks debt that was a relatively small problem, but for all other currencies it meant an automatic reduction of 30–40% anyways, compared to gold backing calculation.

In some cases a country’s currency had depreciated so badly that ignoring the gold clause would strip that country’s creditors of all their claims. An extreme example was Italy; the lira had depreciated 98 percent between 1930 and 1952.
— Timothy W. Guinnane: "Financial Vergangenheitsbewältigung: The 1953 London Debt Agreement", Economic Growth Center Discussion Paper No. 880, Yale, 2004. (PDF)

A table comparing these devaluations in

… the Italian lira, to mention the most extreme case, by 98.2 per cent, an across-the-board abolition of the gold clause would result in the United States creditor foregoing a revaluation of his claims by about 70 per cent, and the Italian creditor foregoing a revaluation by more than 5,000 per cent.
— H. J. Dernburg: "Some Basic Aspects of the German Debt Settlement", The Journal of Finance, Vol. 8, No. 3 (Sep., 1953), pp. 298–318.

But how much exactly was further subject to negotiations.

The creditors proposed that the interest rate to be paid for the two bonds in the future should be reduced to the level of the German-British Payments Agreement of 1938. For the Dawes bond this meant a reduction in the interest rate from 7% of the original contract rate to 5% and for the Young bond from the former 5 1⁄2% to 4 1⁄2%. The interest in arrears was to be well-founded, recapitalised at an interest rate yet to be determined and amortised at 1% after a few years. Payments for part of the interest arrears - a third was under discussion - were to be deferred until the date of reunification.

Abs agreed to examine the proposal thoroughly, although it was much more expensive and did not correspond in any way to the old German proposal. The latter had envisaged a 40%-50% capital cut, a reduction of the future interest rate to an average of 3% and a complete cancellation of the interest in arrears. Abs accepted that a reduction of the capital was in principle out of the question for creditors, but saw a considerable need for further discussion regarding the treatment of accrued interest. If there was to be no reduction in capital, then the territorial factor had to be taken into account in another way. According to Abs, the last word had not yet been spoken either on the rate of interest to be paid in future for the Dawes and Young bonds. However, he considered it a viable solution to incorporate all or part of the arrears of interest on the Reich bonds into a so-called shadow quota and make their servicing dependent on German reunification.

And that is the real problem here. Whatever was agreed upon to be paid out eventually, Italy didn't loose any of that at the London conference. It lost together with Greece and other creditors in 1990 when the Germans tricked the world into staging a re-unification that was not called a 're-unification'. Since the treaty that allowed the annexation of the GDR by the FRG was aptly called "2+4-treaty", any creditors for war-debts were sent away with "in London we agreed to pay the reparations and 'shadow money' only after a re-unification, and we don't have one":

Note that this line was followed strictly for the remaining pre-war debts to be paid out, and for any reparations to be never even account for.

But this shadow quota alone amounted to a nominal value of 239.4 million D-Mark by 1990. In 2002 Germany paid out 4.1 million of these and paying out the last debts of World War One was only completed in 2010. Since many of it was traded on coupons at the stock market like regular shares, some holders during the cold war thought a re-unification so impossible that they sold theirs for penny values…

The initial amount of debt to be paid around the London conference then amounted to 15 billion DMark, lowered to 7 billion at the conference and stretched out with compound interest to amount to altogether 14 billion eventually tp be paid out, with tranches due in twenty years time or until 1988. In 1952 the federal budget of West-Germany was at 23 billion D-Marks.

The actual amount owed to Italy or its Banco d'Italia is further complicated by a disagreement as to when to set the date for anything in that regard. Are pre-war debts defined as "prior to 1 September 1939"? Or should they be calculated as "prior to 14 October 1943"? The German position was initially to regard "everything as already paid", since they had such things like a treaty dated 11 December 1941, where both states made a secret trade with Yugoslavian assets. A deal Germany thought perfectly legal even after the war, while both other involved parties disagreed quite much.

Italy also claimed back the 71 tons of gold the Germans stole from them during the war. They did get that back from the so-called 'gold-pool', from 1947–1988.

35
Why did Italy abandon its alliance with Germany in WW1 and join the Allied side?
17
Italian History from 1870-1913: Why did Italy have such a hard time becoming a "Great Power" like Germany?
9
Did the Allies benefit, by having Italy fight on Germany's side rather than remain neutral?
11
World War 1: Why did Italy not fight until 1915?
1
Did Germany perceive Italy as a good partner in the Triple Alliance?
7
Teaching of Mathematics in Italy and in Germany in the fifteenth century
45
How did Italy and Germany get rubber in WWII?