What were the largest companies in the world before and after the Great Depression?

The Great Depression obviously had a very severe effect on stock markets; how did this affect the world’s largest companies, by market capitalization? Were steel companies, such as U.S. Steel, affected more strongly than oil companies, for example? Moreover, was any sector-based differentiation endemic to these large companies, or was it true of the rest of the sector as well? The Wikipedia article on the Depression has little information on impacts on companies at all, let alone individual firms; it focuses on macroeconomic consequences, or, at best, impacts on heavy industry and consumer goods in aggregate. Furthermore, my attempts at original research have failed: there are no records of the largest annual market caps that I can find online, and a survey of the few companies with easily accessible data will likely be inaccurate.

American Business History Center provides an XLSX file with the top U.S. (public only) companies in 1917 and 1929. here are the 1929 Top Ten:

Source: Forbes Magazine 50th Anniversary Issue, 9/15/1967
List does not include most private companies, so is incomplete
Also, companies were not required to report revenues, so such
companies as ASARCO, American Tobacco, and Standard Oil (NY) are not included

The closest list I could find for post-Depression is in 1955, with the Fortune 500 listing for 1955, the first year in which Fortune magazine compiled and published such a list. Although still just U.S. companies at that time (rather than today's true global listing), recovery from the devastation of WW2 was still a decade away, so all the top global companies were still U.S. companies. 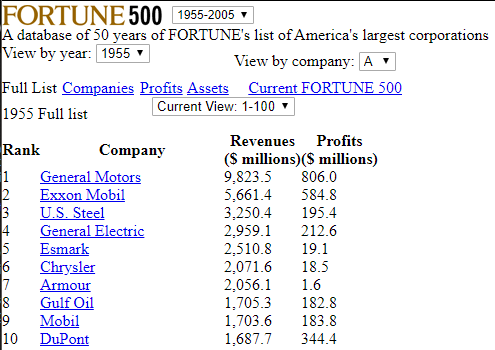 As you can see, all of General Motors, U. S. Steel, and Standard Oil (New Jersey) / Exxon remain in the top 5 but their order has changed, and General Electric and Esmark have replaced Ford Motor and Great Atlantic and Pacific Tea in that elite company.

Note the omission of the Ford Motor Company from the 1955 list, while every year from 1956 until at least 1975 it is in either 2nd or 3rd place. This is because Ford only went public in 1956, so it was omitted from prior lists.

Not the answer you're looking for? Browse other questions tagged economy 1930s business-history great-depression or ask your own question.