Can anyone tell what uniform this man is wearing and what is his rank? 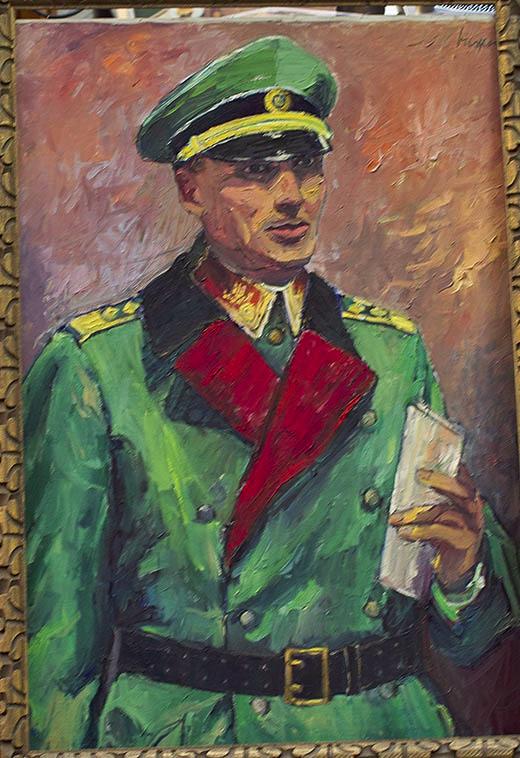 I then researched UNA (Luiz) generals (based on my observation and Pieter's confirmation). Wikipedia's image of Pavlo has the same face and moustache.

Then via google searching we find: 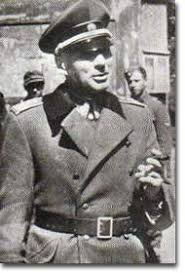 This image is the apparent source of the painting. The painting has been colourised. Shandruk's Waffen SS division, later UNA division, was a "waffen grenadier" division, potentially leading to borrowing the panzer grenadier colours. The image also emphasises political legitimacy due to swapping a cigar with a paper, and humanises by bringing eyes forward. The painting appears to remove some of the affability of the photograph, rendering Shandruk far more serious. However, the artist's lack of ability may be responsible rather than intent here, see the eyes.

The German fascists organised the UNA as an "independent" state. The UNA were a puppet nation with no territory. In keeping with this Shandruk's cockade is Ukraine not German, his neck tabs have a Ukraine nationalist insignia, and as the UNA was "not part of the German state," and so lacks the Eagle and Swastika insignia. This actually makes the painting more fascistic in intent (along side verisimilitude to the photographic original) in that the painting is not an appeal to mid-20th Century German fascist nostalgia, but an appeal to late-20th Century and 21st Century Ukrainian fascist mobilisation.

The distinction without difference of the UNA from its precursor Waffen SS division was a late war nicety to try to get a few more months of combat from fascist organised combatants by appealing to their national & racial imaginary, rather than the German national & racial imaginary. As such this image is well placed to appeal to contemporary Ukrainian nationalist & racial myths.

To a certain extent the German fascist appeal failed: Shandruk's division achieved internment as opposed to being destroyed in the field. Shandruk was successful in making a curious argument to the Western powers for his former waffen ss division members being treated as Polish citizens, rather than people to be transferred to Soviet power. Shandruk has pre-War political history of some length (as expected of a General officer in the East in 1945).

As such the painting appears to be fascist friendly modern Ukrainian propaganda, in a modern reinterpretation of Ukraine's fascist pasts.

Although there are some discrepancies, this appears to be a General der Infanterie of the Panzer Grenadiers, wearing a general officer's version of the M36 wool greatcoat over his service dress (though perhaps in less than full formal attire shown below).

Note that while in late war Whermacht feld grau uniforms all tended to a dusty grey colour due to cost savings introduced in 1940 and again in 1943,uniforms prior to 1940 possessed a distinctive greenish hue. As German officers were responsible for procuring all their own uniforms, not only were those uniforms typically much better tailored than for lower ranks but officers of better means would continue to procure and wear pre-war quality materials. In highlighting the green, as here, the artist seems to be emphasizing the financial means of the subject (and perhaps also his vanity).

Quotes below otherwise unattributed are from Chapter IX - Uniforms, Insignia, and Individual Equipment of the U.S. War Dept.'s Handbook of German Military Forces.

It may be a German General der Infanterie of the Panzer Grenadiers as Pieter Geerkens answers. The painting may be inaccurate regarding military insignia. And the style looks very Third Reich-like.

Then I have another (more unusual) hypothesis:

The rank insignia, appears to be from Ukrainian National Army. As they were a Ukrainian unit fighting for the Axis, it would make sense to have German uniforms.

The blue-yellow cockade, it may be a Ukrainian cockade.

If somebody could find what a collar patch from a UNA general looks like, it would be another possible evidence.

It would be helpful if you have more info about your painting history.

BTW, that site http://uniforminsignia.org/ is wonderful to check these issues.

Not the answer you're looking for? Browse other questions tagged military 20th-century uniform or ask your own question.