The karahafu (唐破風) is perhaps the most instantly recognisable Japanese architectural feature, yet it's origins are not well established in Western literature. Folk etymology suggests that the style was imported from China some time during the Nara or Heian period, following the usage of "唐" as in "唐様" (karayou, "Tang [Chinese] style"), another name for 禅宗様 (zenshuuyou, "zen style"). However, according to the few English language sources I've been able to find online, the karahafu is a Japanese invention of the Heian period. 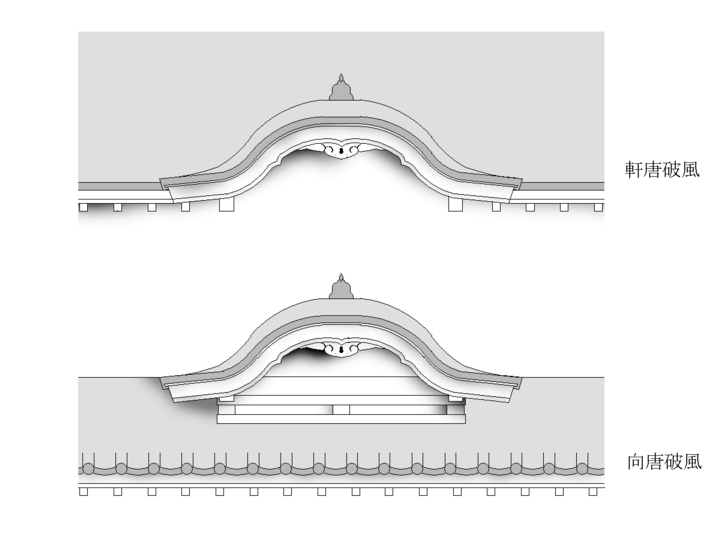 (Diagram of two styles of karahafu seen in Japanese castles)

This does little to clarify the origins and significance of the karahafu, however, and many questions remain unanswered.

Although the design of the karahafu is quite different from anything that can be found on the continent, it is also atypical pre-Buddhist architecture, suggesting that it doesn't derive from vernacular or "purely indigenous" Japanese styles (e.g. taisha-zukuri (大社造)). The usage in palatial and religious architecture, particularly prior to the Edo period, places the karahafu closer to the Sinicised (or, perhaps, Koreanised) traditions of Japanese architecture.

There are also peculiar features of the karahafu indicative of conscious design choices. The ibara-hire (茨鰭) on the barge board and rafters, for example, can be seen in even the earliest depictions of Karahafu despite being relatively difficult to create (compared to a simple, arched gable) and serving no apparent function.

What purpose (structural or symbolic) was the karahafu originally intended to serve? Did the style evolve naturally over time or was it introduced by a person or group of people (possibly in connection with Buddhism)? In the case of the former are their transitional examples between earlier predecessors and the modern design (as with other architectural elements like the noyane (野屋根))? In the case of the latter is there any record of the progenitor?

A note on dates:

The date given in history texts for the construction of buildings is, ordinarily, the date that the building was first constructed, rather than the date when the present structure was built. In many cases, a building will be destroyed and later reconstructed - so that the present building is not the one first mentioned in primary sources.In most cases, the reconstructed building is built in the contemporary style, and does not accurately reflect the time period of the previous structure. This is a hurtle that I have encountered when discussing architecture history in general, not just Japanese architecture history. The same problem occurs, for example, when discussing the architecture of older churches.

A note on early examples:

According to the English wikipedia article, the earliest example of karahafu can be found on a miniature shrine held in the shouryo-in (聖霊院) at Houryuuji (法隆寺) in Nara, and dates to ~1278. However, according to this blog post, no photography is allowed in the shrine (the author does provide a sketch, however). I have not been able to find any studies relating to this particular shrine, and I cannot verify its age.

The earliest [standing] example with a definite date belongs to the Izumo Takeo Jinja Haiden of Tenri Isonokami Shrine (石上神宮摂社出雲建雄神社拝殿), dated to ~1300. Although the building was dismantled and moved to its present location in 1914, depictions of the shrine on 18th century maps indicate that it has maintained its original design since its construction.

The earliest depictions which I have been able to find are in paintings - specifically, the Tokyo museum's copy of the Story of Obusuma Sakuro handscroll (男衾三郎絵巻), dated 1295, shows a corridor (called kairou in Japanese, I think?) and a boat with karahafu. The detail can be seen here:

Another early depiction, dating to the 14th century can be found in the Illustrated Biography of Priest Hounen (紙本著色法然上人絵伝1巻).

In addition to these, there seems to be a now-extinct roof style which vaguely resembles karahafu that can be found in the Moukou Shuurai Ekotoba (蒙古襲来絵詞), dated 1293, and the Raigo of Amida and Twenty-five Attendants (阿弥陀二十五菩薩来迎図), dated to the 13th-14th century. I cannot say for certain whether or not this type of arched gable has any connection to the karahafu.

Kara-Ha-Fu, is, for example, according to this page, like this,( the encircled "style" of the building in yellow ).

The usage in palatial and religious architecture, particularly prior to the Edo period, places the karahafu closer to the Sinicised (or, perhaps, Koreanised) traditions of Japanese architecture.

Yes, according to the author of the page,

唐(Kara in Japanese, Tang in Chinese respectively) means China, but it seems these styles can not be found in China.

The picture you see above is the 東大寺大仏殿(I am sorry there is no English Wiki available(But you can see at least the picture), which is,

To your first question

Although the design of the karahafu is quite different from anything that can be found on the continent, it is also atypical pre-Buddhist architecture, suggesting that it doesn't derive from vernacular or "purely indigenous" Japanese styles (e.g. taisha-zukuri (大社造)). The usage in palatial and religious architecture, particularly prior to the Edo period, places the karahafu closer to the Sinicised (or, perhaps, Koreanised) traditions of Japanese architecture.

According to this page(sorry not in English)

Many people would guess that from the name 唐破風, the impressive recurved 唐破風 style is supposed to be imported from China, but it is indigenously Japanese style, and the origin is from Kamakura period,（English) and it made the full debut in, Azuchi-Momoyama period(English). ---> The status of the style was considered at that time by the people was most ex graded so that the style was used for many castles and Shinto shrines/Buddhist shirines. ---

Architectural structure and the origin

I will try to be as simple as possible.

This is the anatomy of wooden house in English. 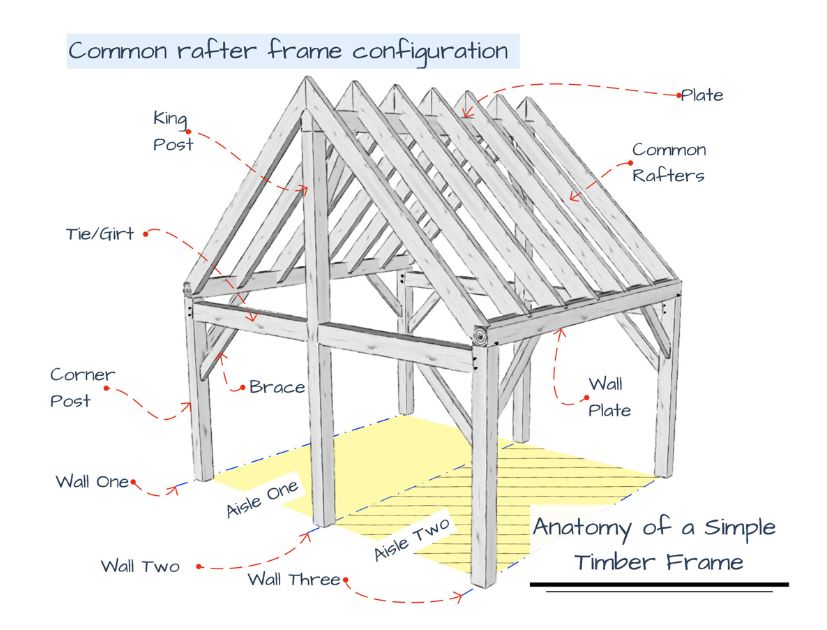 In Japanese architecture of the roof, the each part of the roof is categorized into these parts (please look at the below picture) and 破風 is there (yellow part). 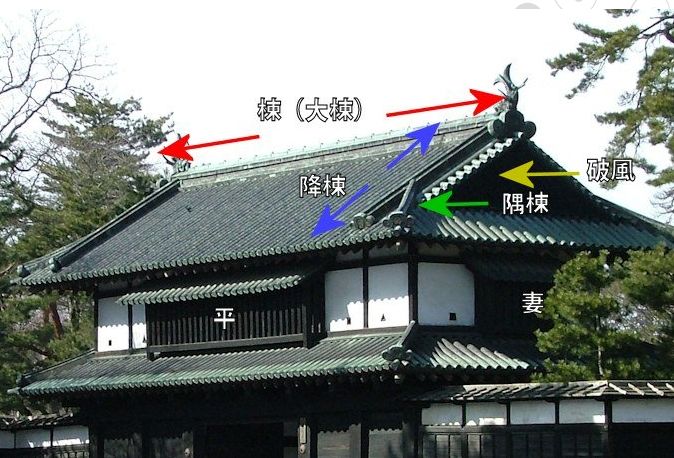 It corresponds with the upper half of the king post part in English.

And then what is unique about 唐破風?.

There are also peculiar features of the karahafu indicative of conscious design choices. The ibara-hire (茨鰭) on the barge board and rafters, for example, can be seen in even the earliest depictions of Karahafu despite being relatively difficult to create (compared to a simple, arched gable) and serving no apparent function.

According to the same page,

It is the collection of the curved wooden parts that support 破風. 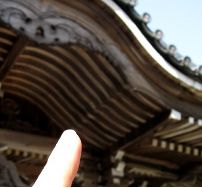 Why is the style called 唐破風?

As @Brian Z suggests, and this page also says,

The early 唐物屋(hard to translate:Would be "Chinese products dealers") are in reality high price antique dealers, dealing with wealthy scrolls and cups for tea in the tea room. 唐物風("Chinese style") goods were called as 唐物("Chinese goods") even though they were perfectly 100% Japanese.

So around 15th-16th century, the name "唐" become not to denote "China" but instead become to mean pricy things and did not correspond at all with "China".

How old does the structure date back?

This shrine dates back to Asuka period. And the shrine has an entering with 唐破風. (But I highly suspect that this entering was added in later dates). 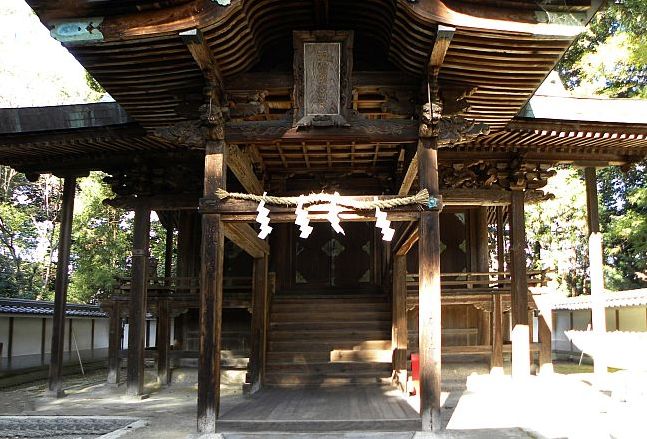 What is the significance of the structure with respect of the viewpoint from architecture?

This study considers the process of a value and the application of the traditionalcurve of inflexion ‘‘Kara−hahu” to the architectural design after the Meiji era ．First，the curve had a gentle slope in the Heian era and itwas valued beautiful.

How old does the style date back?

Well, it looks like the style dates back to at least Heian period, which coincidentally went the same period with Tang dynasty in China.

Why is the significance of the name?

Well, as the time descends, the name 唐 denotes "beauty, pricy" things so that it was applied to many castles and shrines from the viewpoint of the beauty.

The Wikipedia article on this feature emphasizes that it began as a symbol of spiritual auspiciousness and then evolved into a more secular symbol of high status before wider diffusion.

It was named thus because the word kara could also mean "noble" or "elegant", and was often added to names of objects considered grand or intricate regardless of origin. [...] The first known depiction of a karahafu appears on a miniature shrine [...] Initially, the karahafu was used only in temples and aristocratic gateways, but starting from the beginning of the Azuchi–Momoyama period, it became an important architectural element in the construction of a daimyō's mansions and castles. The daimyō's gateway with a karahafu roof was reserved for the shōgun during his onari visits to the retainer, or for the reception of the emperor at shogunate establishments. A structure associated with these social connections naturally imparted special meaning. Gates with a karahafu roof, the karamon (mon meaning "gate"), became a means to proclaim the prestige of a building and functioned as a symbol of both religious and secular architecture. In the Tokugawa shogunate, the karamon gates were a powerful symbol of authority reflected in architecture.

This strikes me as a clear example of how something like the European "civilizing process" may have also taken place in Japan. In other words, it is logical that as the secular state expanded its power, the rituals and symbols that were first developed as markers of nobility were gradually emulated by the society as a whole.

I believe that the karahafu most likely developed in Japan, but I have also been wondering if there are any architectural precursors from China and/or Korea. I recently came across this Song-Dynasty painting which depicts a building with something resembling a karahafu: https://www.clevelandart.org/art/1915.705

However, there's a possibility the pavilion in this image has nothing to do with the karahafu, since the karahafu-like gable depicted in the pavilion is situated on the side as a balcony, as opposed to at the entrance.

Not the answer you're looking for? Browse other questions tagged japan cultural-history architecture or ask your own question.