What is the meaning of the quadruple symbols combination on a possibly Roman monumental piece?

During my visit to a village central western part of the Asia Minor I saw monumental pieces. Which were emplaced on some part of the buildings by villagers. I see a sword, sickle (hook), pickaxe, and an unidentified one on the piece.

I am wondering about what these symbols altogether mean on a single piece and which civilization it belongs to? 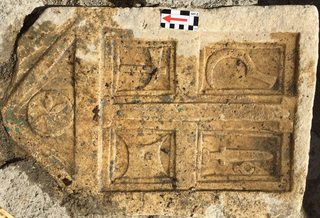 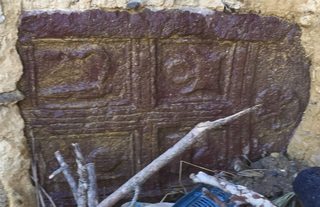 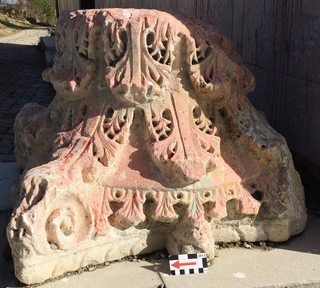 The top of that column may be quite unrelated to the rest. As we lack more info from the situation and surrounding findings, inferences are also limited for the first two carvings.

But those other two need to be rotated. Then we see a bas reielf for a blacksmith or even locksmith: 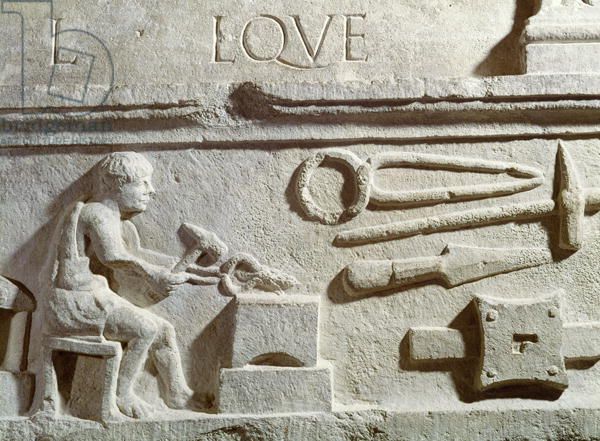 Whether it is from funerary stele or a 'shop sign' seems an open question without further details.

And finally, I'll show that famous image from a locksmith's grave stone, now in the Aquileia museum, that actually shows Roman lock makers at work! Note especially the completed door lock on the lower right. The bellows and tools: hammer, tongs and file, are immediately recognizable, and remain much the same for the next 1500 years and more. Notice also the design oŁ that little furnace, made like a miniature temple.

To the right are tongs, hammer, a spearhead and a lock.

The picture I used is credited with:

Not the answer you're looking for? Browse other questions tagged ancient-history architecture ancient-rome symbols asia-minor or ask your own question.

14
What happened to all the notable Roman families?
7
The monumental/architectural sculptures of Petra - has there been any research on the likely craftsmen who executed them?
3
What do the knight figures in the Kehlsteinhaus fireplace symbolize?
16
What is meaning of 4 letter abbreviations in Roman names like Titus Flavius T. f. T. n. Sabinus?
11
What are some symbols representing peasants/oppressed persons fighting back?
4
What ancient Roman(s) wished houses were made of transparent walls?
5
Help me identity the symbols on this relief?