What made California Indian baskets so good?

"California Indians were among the world's most sophisticated basket makers", according to Steven Hackel in Children of Coyote, Missionaries of Saint Francis. Descriptions of the baskets emphasize the skill and the knowledge of materials that were required to weave them. One principal collector, the California State Parks, has an Indian basket collection of over 3,000 examples, and another, the Phoebe Hearst Museum, has 8,000. Basketware seems to have been a principal artistic endeavor of California natives even between faraway groups speaking unrelated languages.

I gather that in basketry, very tight weaving is a desirable feature. Some of the Californian baskets were even watertight, both for water carrying and for boiling food. Watertightness may not be limited to California, but most references I saw to waterproof baskets in other cultural contexts involved sealing the basket with pitch or urethane. According to the State Parks web site, "The ability to weave a watertight basket demonstrates the sophisticated technology and plant knowledge possessed by many California Indians." That technology is not specified.

I'm curious how these Californians managed to make such great baskets. Now, perhaps there are some native peoples of the Pacific Northwest who are in the same league, using spruce roots, and the question should apply equally to them. Since traditional techniques continued long after the contact period, it seems key materials continued to be available despite the ecological changes attendant to colonization.

These native societies valued basketware enough to devote substantial resources to making decorated baskets. But can their dedicated artistry alone explain the great results, or did they also rely on special techniques or materials that were not available elsewhere? 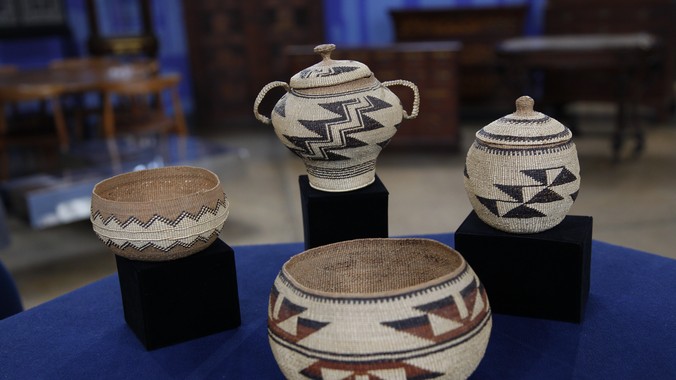 It looks to me as if there are clearly differentiable technologies at use in these lands. Primarily, I understand, we are interested in those which did not use tar for waterproofing and instead attained waterproofing through weaving only (such that these items could be used in cooking, etc) (thanks @jamesqf for this link).

The above article mentions 'willow' as a specific plant used for weaving:

According to Catherine S. Fowler and Norman R. Delorme, in their chapter on Great Basin basketry in the Handbook of North American Indians:

“By employing the techniques of twining and coiling using carefully tended, selected, and prepared willow stems, the people of the western Great Basin created baskets in a wide variety of shapes and styles to serve both practical and aesthetic needs.”

However, this doesn't really address what was special about it. Coyote willow was also used in Californian basket weaving.

The 'willow' is supported by 'Invasive plants impact California native plants used in traditional basketry' which further goes on to explain:

For example, the spread of introduced tamarisks, or salt cedars (Tamarix spp.)—plants with a strong ability to uptake large quantities of ground water in arid habitats of the Southwestern United States—has caused significant losses of culturally important native plants, including cottonwoods (Populus fremontii) and willows (Salix spp.) through water deprivation. ... replanting of plants such as sand reed (Calamovilfa gigantea), willow, and yucca closer to reservation lands where they can be better conserved (Salmon 2003).

In California, traditional basketry using native plants is one of the most prominent conserved Native cultural practices. Basketweavers explicitly use native plant materials and ancestral techniques in traditional basketry in an integrated approach to conserving their history and culture. Yet the preservation, revitalization, and expansion of basketweaving amongst California’s indigenous groups has been subject to many stressors, including the basic need to obtain the requisite raw materials for weaving. As Bibby (1996) notes, “Several community weaving traditions may have been lost due to difficulty in obtaining weaving materials.”

Willow is also a part-emphasis of a mighty dissertation (Klamath area focus), 'Traditional ecological knowledge to develop and maintain fire regimes in northwestern California, Klamath-Siskiyou bioregion'. This was, all-in-all, much too lengthy for me to even try and summarise, but I note a few relevant sections:

[PDF p44] ... sandbar willow communities do not experience the rejuvenating disturbances that they historically did. This lack of disturbance results in decreased quantity and quality of willow shoots and roots for basketry.

[PDF p106] Young willow stems that have sprouted from recent disturbance are preferred for basketry because of the straightness, length, pliability, and reduced insect damage to the shoots. Accessibility to potential stems is increased from sprouting at the ground level or lower branches. Sandbar willow is a vigorous and prolific shrub that responds well to moderate or periodic disturbance (Otternbreit and Staniforth 1992).

Also, from an interview (PDF p151) the author (FL) quotes with 'LG' which described how, at least in that area (more humid than the parts described by the other article, I think), burning replaced flooding with the construction of hydropower dams upriver:

LG: Yeah. I never heard of [it], I just recently hear people burning it. I know when we first started weavin’, we had a lot more water in the river and it would come up and wash all those willows out, under the bridge, all over. I mean the river bed would be clean from anything. But now that we don’t have the water, don’t have the high water, it comes up and those willows just keep growin’ into big trees now.

FL: And before they used to be washed out?

FL: So do you think they started burning willows as more like a response to not flooding as much?

LG: Yeah because down at the bridge what they did, they burned that, those were getting to be, all buggy.

FL: So that’s one of the reasons they burned the willows is to get rid of the bugs. And a flood did the same thing?

LG: Well, we had better sticks then.

FL: Younger stuff, what I think it is, the younger material.

The same article from above goes on to give a (more) extensive list of the plant species involved in native weaving:

Perhaps the most well-known use of plants by the First Peoples of California are traditional twined and coiled baskets (see Figure 2), made from the shoots, stems, bark, fibers, and roots of native plants such as cottonwoods, willows, sedges (Carex spp.), redbuds (Cercis occidentalis), deergrasses (Muhlenbergia rigens), tules (Scirpus spp.), hazelnuts (Corylus cornuta var. californica), and cattails (Typha spp.), along with many other grasses, herbs, ferns, rushes, shrubs, and trees. In addition, dozens of plant species are used to weave and dye Native baskets (Moser 1989, Strike 1994, Bibby 1996, Moerman 1998, Dalrymple 2000).

Also, later 'beargrass' is mentioned though it wasn't previously:

And how the making of baskets happened (not too technical), again from the above-mentioned article:

Native basketry begins with protecting and tending one’s gathering sites, and extends through to the weaving, coloring, and patterning of each basket.

Plant material is gathered carefully, thankfully, and reverently at specific times of the year, often from sites maintained by the basketweavers’ ancestors for centuries (Ortiz 1993a, Fulkerson 1995). Gathering sites are managed through burning, weeding, tilling, and debris removal. This enables basketweavers to return to the same sites year after year to gather sufficient amounts of high-quality weaving material (Anderson 2005). Basketweavers search for material that is healthy (free from pests, disease, and herbicide residues), strong, straight, supple, and of the right shade or color.

Many plant types gathered by basketweavers require continued onsite care (pruning, burning, thinning, selection) to produce the desired quality of plant material. This is true for willow, hazelnut, and redbud, where pruning and coppicing (cutting stems close to the ground) encourages long, straight shoots; for deergrass and deerbrush (Ceanothus spp.) that are burned to produce tall, supple new shoots; for white root (Carex barbarae) that is thinned to yield longer, straighter roots; and for other sedges that are selected for longer lengths between root nodes (Ortiz 1993a, Strike 1994, Stevens 1999, Anderson 2005).

Most plant material used in basketry is processed by stripping, debarking, soaking, drying, dyeing, or division before it can be woven (Moser 1989). ...

From the above-mentioned dissertation:

[PDF p260] A “good” usable willow shoot is a single straight stem greater than 1 mm in diameter and longer than 10 cm, without lateral branches, kinks, or signs of insect damage or bark defects.

[PDF p279] not all of the shoots growing on an individual clump are usable for the same basket (Figure 6.10, and 6.12). Basket quality is a product of several components. The clumps must be properly managed to facilitate sprouting, which can be done by burning, pruning, or other disturbances that affect the above- and below-ground tissue (Anderson 1999, Anderson 2005). Second, shoots need to be similar in diameter, length, and taper (O’Neale 1995, Van Pelt 1982, Figure 6.19). Third, shoots of similar size need to have structural integrity and should be free of damage such as blemishes on the bark caused by abrasion and insect pests. Shoots also should be alive from the stem’s butt to its tip (O’Neale 1995, Anderson 1999). Lastly, there must be an ample supply or accessible quantity of these nearly perfect shoots to construct high quality baskets.

Further, hazel is mentioned as providing superior results in the same methodology:

[PDF p279] Basket weavers consider hazel a more superior material to work with because of its durability, flexibility, and relative pest free qualities when compared to sandbar willow, Ceanothus, or Douglas-fir.

There's also this very informative figure of the calendar of the Klamath-region basket-weaving (PDF p278): 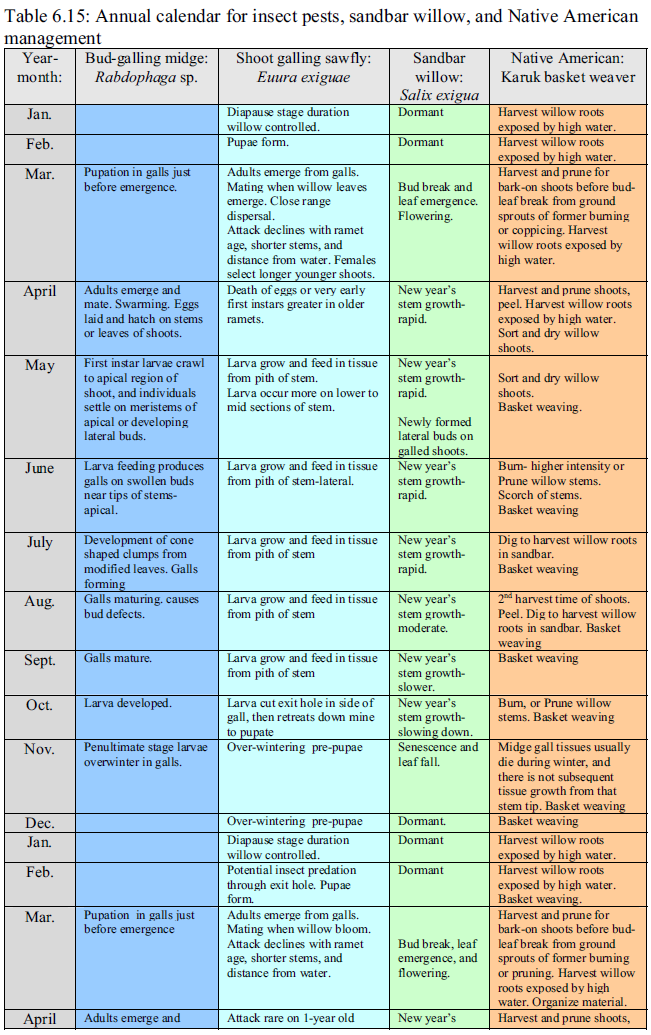 Looking quickly at a couple of relevant archeological papers like this and this, a few things stand out. One, California was apparently one of the first places in North America to develop basket technology, so their technology had the longest to develop . Two, scarcity of fresh water in the environment may have produced the need for waterproof baskets. Three, the local availability of bitumen tar from natural oil seeps was key to waterproofing.

Not the answer you're looking for? Browse other questions tagged technology native-americans california historical-techniques or ask your own question.

14
Were any California presidios conquered?
7
Why Californian Indian leader Estanislao was named after Polish martyr?
8
How would a 16-17th Century European Rapier have been made?
6
What were the largest newspapers in mid-1800s California?
4
How were native laborers on California ranchos treated?
18
What were the indigenous populations of California before American settlement began to peak?
5
When was unleaded gasoline introduced in California?
1
When were the baskets invented in Australia and America?
2
Who named San Andreas, California?