How were horses disembarked from sail ships?

Back in late 18th century, ship of the line embarked soldiers (e.g. royal marines) that can perform land actions. To disembark, they took place into longboats.

If a specific land action was planned, I imagine they also embarked cavalry. Thus, they must transport horses from the ship to the land without dock facilities. I fail to imagine how they could transfer a horse into a longboat and then from the longboat to the land.

How did they disembark cavalry horses on such unprepared land? I'm more specifically interested in cavalry horses embarked on ship of the line in the late 18th century (I imagine they were transported in lower decks of three-deckers)

EDIT: given comments, I think it is useful to provide context in which this context pops into my mind: I was watching the 4th episode of Hornblower (The Frogs and the Lobsters) that took place in the 1790s. In this episode, marines disembark on a beach. We can see marines disembarking using longboats, and few scenes later we can see a marine officer on an horse. There is a missing step for disembarking the horses from the lower decks of frigates (I imagine you don't store large animals such as horses on the upper deck) to the land and I wonder what it looks like.

The easiest and most preferable way. Might require specialised or retrofitted ships: 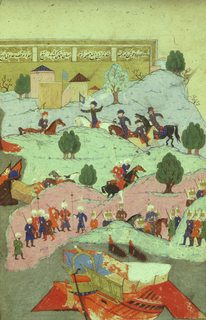 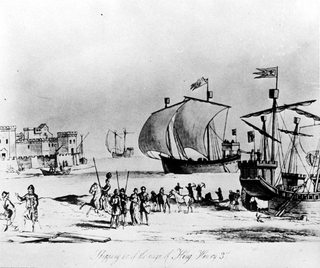 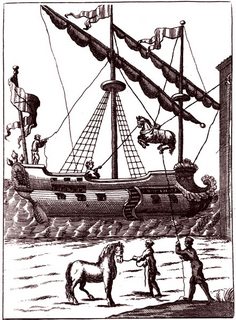 If waters/shore and ship railing are all low enough then of course just a little jump suffices. 'Lifting' already is quite difficult and carries great risk of broken bones. This 'jumping' is dashing and even more prone to animal injury.

A jump, or 'drop' was not really uncommon, but may require the horse to swim the last bit, meaning a fully armed and armored rider is unlikely to take the leap as well: 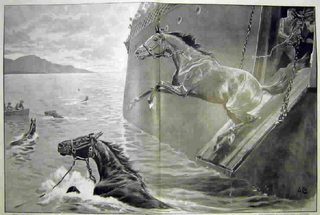 Note that horses can swim, but certainly not that good if outfitted for attack as a war horse, or even in armour.

Swimming is one of the most aerobic activities that animals can do. A 10-minute swim is equivalent to a several-mile canter, so don't overdo it.(src)

The problem of shallow waters and horses on a big ship with nowhere to dock is illustrated here:

In the non-tidal waters of the Mediterranean war galleys, like the dromons and the khelandia, would have been suitable for any sort of landing on a hostile beach, unlike the heavy and round-hulled pamphylos, which required a dock. The horse-transport units of the Byzantine fleet had been equipped with a climax since at least the early tenth century, which was a ramp used for the loading and unloading of the horses from the ship’s gunwales, either from the stern or usually from the bow. This term is mentioned in the De Ceremoniis for the Cretan expeditions of 911, 949 and 960/126 and reveals the necessary modifications to the ships when they had to carry horses, such as hatches not just to the sides but also on the decks, leading down into the holds, while further modifications would have been engineered in the hulls of the ships concerning the stabling of the horses. According to Pryor, the khelandia were indeed specialised horse transports, able to carry between twelve and twenty horses. But these must have been built differently from dromons when it comes to the dimensions of the ship’s beam, which would have been much wider to accommodate both the lower bank oarsmen and the horses. A significant structural difference between the tenth-century Byzantine transport ships and their Italian counterparts in the twelfth century was that the latter placed both banks of oarsmen on the upper deck, thus making more room for the horses in the ship’s hull.
— Georgios Theotokis: "The Norman Campaigns in the Balkans, 1081–1108", Warfare in History, Boydell and Brewer: Woodbridge, 2014. (p97) 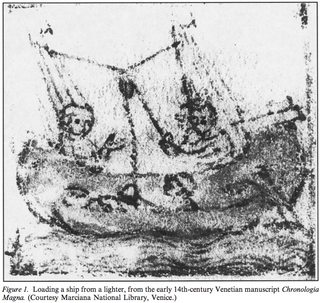 The back-breaking task of handling cargo is most easily accomplished by mooring the ship at a wharf, setting a gangway from dock to ship, or, for heavier loads, utilizing a harbour crane or pulleys rigged from the ship’s mast and spars. Not all harbours were deep enough for large ships to reach dock, nor did all inhabited coastal regions have specially built wharves or jetties; these became more common from the beginning of the 12th century. A range of loading practices are alluded to in one scene of the 11th-century northern European Bayeux Tapestry: ‘one boat being beached, another coming to anchor in the shallows, and others fastened to a mooring post’.

It should be remembered that at least two transport ship types existed: large, sailed nave roundship transports and oared transports. It seems reasonable to conclude that the horses could disembark, armed and mounted from some transport ships but not all, and that some horse ports were positioned lower in the hull. Large nave with horse ports were nailed shut, sealed, and caulked. It may be hard to believe that the ports were actually below the waterline, as is explicitly stated by Joinville, Bonolis, and Jal, but surely, the ports were caulked for good reason. However, caulking may not have been necessary on oared transports designed with the horse port well above the waterline, discharging from a weather deck. Robert of Clari testifies that saddled, armed horses embarked and landed through horse ports, and Count Charles’ description, too, makes it clear that on his ships, the horse port swung open at the stern and was large enough for both horse and rider, mounted and fully armed, to disembark. Count Charles recognized that such a large opening created a structural weakness that needed to be fortified by larger deck beams and the addition of strong timbers.
— Lillian Ray Martin: "Horse and cargo handling on Medieval Mediterranean ships", The International Journal of Nautical Archaeology (2002) 31.2: p237–247. doi

Some of the exact implementations may remain unclear, as the available space was according to sources really tiny, but the basic principles are really convergent: 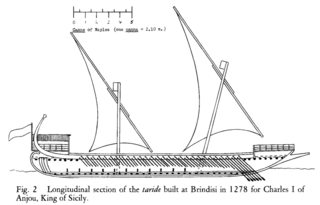 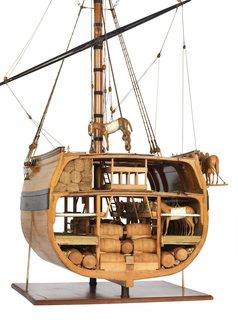 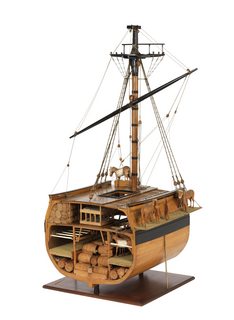 With big ships transporting lots of horses and no port or docking in sight, and beaching the vessel not an option, there is basically just one option for quick readiness and in full bridle, unload the horses from a big ship onto a boat with shallow draught, then proceed to landing ground with the horses on those: 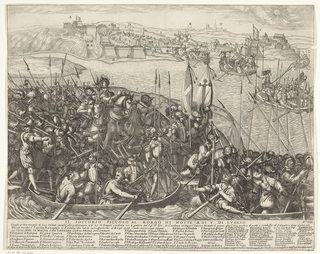 Gran Soccorso arriving during the Great Siege of Malta. 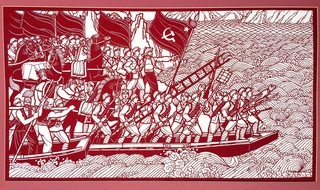 As noted in a comment there's a section of the Bayeux tapestry that depicts a horse being transported and another being led out of the water. Digging a bit deeper though, it looks like there was a bit of handwaving involved by the tapestry's creators.

Warfare in Medieval Europe 400–1453 by Bernard Bachrach and David Bachrach has a whole section on horse transport, most of which is unfortunately not available in Google books. Gleaning through the tidbits that I could read though, the authors suggest that what's on tapestry depiction is a far cry from what likely occurred. The authors continue on by suggesting that the question of how the Normans transported and disembarked horses is very much unresolved.

The Cambridge Illustrated Atlas of Warfare: The Middle Ages, 768–1487, by Nicholas Hooper, Nick Hooper, and Matthew Bennett, seems to have a section on horse transport as well. It corroborates most of what can be gleaned from the first source. It also mentions that Longships could be used to transport a score of horses, but doesn't give the slightest detail on how they might have been on- and off-loaded.

What seem clear is that flat ships called tarida and stern ports, which is to say gateways with a ramp in the back of boats, played an important role in medieval horse transports. Quoting the first source: The earliest mention of a horse transport equipped with stern ports comes from the pen of Leo the Deacon (die c.992), who described a military operation by a Byzantine fleet in 969.

In passing, the first source also mentions the importance of transporting the horse in an equine sling, which I took as an indicator that they knew of the latter in those days. (I couldn't locate any reference on when these might have been invented.) This means that lifting the horse could have been an option too.

Another point that's worth noting is that even in the age of sail, all horse transports that relied on stern ports needed oars in order to be maneuvered in the correct position to unload the horses.

Not the answer you're looking for? Browse other questions tagged naval age-of-sail historical-techniques or ask your own question.