What relation do the early sexual experiences of Lolita and her classmates bear to the real experience of children in New England in 1947?

In the last pages of part 1 of Nabokov's Lolita the title character's abuser Humbert relates 12 year old Dolores's (Lolita is H's nickname for her) description of her own previous sexual experiences, in the course of which she mentions ways in which some of her coevals at school had been "pretty bad." She implies that by the end of 6th grade several of the class had experience of sexual intercourse. My own prejudices concerning the not famously permissive 1940s would not have led me to expect this.

I would be curious to discover any evidence concerning the actual level of sexual development and experience shown by New England 6th graders in the 1940s, as well as any theories on whether it was the author's intention that the reader should accept Lolita's portrait of her pre-adolescent milieu as plausible, or whether it is deliberately surprising.

N.B. - having posted this on the Literature Stack Exchange, a commenter suggested it might be more the domain of the historian - please refrain from making the reverse suggestion here!

When I saw this question I immediately went to look at Sexual Behavior in the Human Female, the first study of its kind. It was published by Alfred Kinsey and colleagues in 1953, based on data collected over 15 years. The sample was meant to be representative of the US female population in general. (EDIT: As @Luiz raises in the comments, this claim of representative sampling has been subject to criticism and debate.)

The most relevant data table is as follows. If I'm reading this correctly, it shows that 3% of the women surveyed reported pre-marital heterosexual intercourse before age 16, and that 20% did between ages 16 and 20. 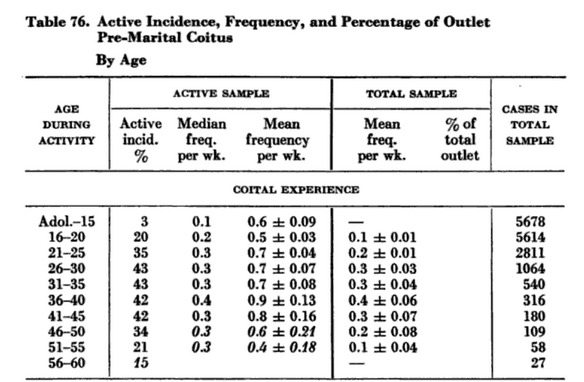 Sixth graders would have been significantly younger, I'm assuming around 12. That does seem a little too young to be believable. But this data does show that sex as young as 15 to 16 was perhaps more common then we might expect in the 1940s.

Lolita is a novel by a European literary author whose purpose is to convey aesthetic and critical perspectives on the process of reading and writing itself. New England, Americana, and paedophilia are adjuncts to the purpose of the author attempting to "read himself into" the reader by producing a hostile, lying, multiply layered narrative based around characters that do not exist on multiple levels.

Lolita's text is purported the found document produced by a dead paedophile. In the text Humbert states clearly that "Lolita" and "Delores" are not the name of the child he abused. He has created a pseudonym for a pseudonym, much like the book is a text within a text. Given what we know about paedophile deceit, internally and to others, especially including myths about "consent" that paedophiles produce, this is your first big clue that the text is entirely an invention by Humbert to justify himself. Think of the Chapter, "Oh Lolita I would fill a page with your name over and over. [Note to printer: please fill page.]" To that end the produced text involves standardised tropes. Humbert claims to be a literateur, and worked as a scholar in a remote and unglamorous university. Yet he relies on some pretty cliched inventions, including an appeal to his own childhood romance, a hostile external party (Quilty) persecuting him, the myth of consent, and at a deeper level his claims that Lolita had already been serially violated (for example by Quilty's cousin the dentist who regularly filled her cavities), and more over that Lolita "enjoyed" these (for example at Camp Climax). These are excuses put by a character claiming that his repeated rape of a child should be sympathised with. Quite often given the depth of reading by the standard reader, Humbert's appeal works and the reader feels sympathy for the character.

Given that Nabokov was a European literateur, whose strongest impulse was to play some meta-literary games with a reader, and whose setting was chosen because he enjoyed Americana, there is no connection between Nabokov's texts and the rate or incidence of systematic or individual child abuse in North America, or of individual experiences of abused children.

Incidentally it matches generalised features of child abuse, such as patriarchal power, the patriarchal family, "closed" institutions without deliberate systems of disclosure. These are generally agreed to be common to at least industrial societies. Given that the accounts of child sexuality are entirely mediated by adults and an adult narrator there's no good link to the internal world of children in the latent stage of sexual development.

Novels aren't good historical texts. They are even worse when it comes to making historical claims about human sexuality at the level of the contents of the novel, rather than the novel's social positioning. Lolita's reception as a text, for example, could be used to engage 1950s US sexuality: why there was a minor fascination in public with texts like this.

Not the answer you're looking for? Browse other questions tagged united-states 20th-century 1940s sex or ask your own question.

7
What did Central America export in the early 20th century other than coffee and bananas?
13
Why was slavery profitable in the Southern colonies and not New England?
6
What possible uniform with decoration is my ancestor from New South Wales in the early 1900's wearing?