Did the Romans leave any technical instruction manuals behind?

I am curious as to why so much of the Roman's knowledge of architecture and construction was lost in medieval times, especially since there did exist people able to read Latin and the old Roman manuscripts. Did the Romans not leave any instructions regarding the technical aspects of construction and architecture?

The only book to survive from ancient Rome on architecture is Marcus Vitruvius Pollio's De architectura, found by the Renaissance scholar Poggio Bracciolini in 1414 after being largely forgotten. Bracciolini was one of a number of humanists "devoted to the revival of classical studies". However, it had been referred to by several churchmen, chroniclers and scholars during Medieval times, but comprehension was perhaps hindered by lack of understanding of some technical words and also missing illustrations. An English translation is available here. 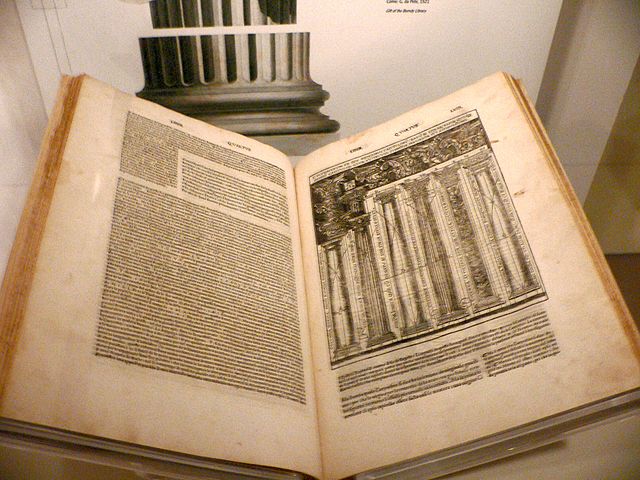 Numerous works have been lost to fires, wars, accidents, floods etc., and some because they were not considered worth copying by later scribes (or they came low on the list of priorities), but some other technical information did survive (for example, Frontinus' De aquaeductu was found, also by Poggio Bracciolini, in 1425 and made use of during the Renaissance). However, while there were people throughout the medieval period who could understand the language in which it was written, this is not the same as understanding and being able to exploit the knowledge contained therein. Vitruvius himself wrote at the beginning of his manuscript:

The architect should be equipped with knowledge of many branches of study and varied kinds of learning, for it is by his judgment that all work done by the other arts is put to test. This knowledge is the child of practice and theory...

Cited in: The Oxford Handbook of Greek and Roman Art and Architecture

A certain degree of basic technical knowledge is certainly helpful. More importantly, skilled craftsmen would be needed to do the actual building. These were lost, along with Roman concrete. As Wikipedia on Roman Technology surmises,

Roman technology was largely based on a system of crafts. Technical skills and knowledge were contained within the particular trade, such as stonemasons. In this sense, knowledge was generally passed down from a tradesman master to a tradesman apprentice. Being that there is only a few sources from which to draw upon for technical information, it is theorized that tradesmen kept their knowledge a secret.

Further, the kinds of building projects for which the Romans are famed (for example, aqueducts) require enormous resources. In the wake of the fall of the Western Empire and the economic decline that went with it, few states had such resources. Note that the most prominent structures erected in the Middle Ages - churches and castles - were built by those who could command the wealth and human resources to do it.

Note also that Roman architecture did not completely disappear; for example, the basilica was used in churches by the Merovingians and the Carolingians.

While not exactly manuals, some of the architectural instructions survive on the buildings themselves.

The Roman temple of Bziza has a wall that bears marks of an architectural sketch on how to assemble the half-pediment of the pronao of the temple itself; there's also an engraving of the temple's entablature.

The temple of Jupiter in Baalbek, Lebanon has drawings sketching the construction of the Jupiter pediment and the ablution fountain roof; there's also a scaled-down floor plan. Some of the drawings are quite detailed and cover an area of 4 x 13 metres.

Daniel Lohmann, Drafting and Designing. Roman Architectural Drawings and their Meaning for the Construction of Heliopolis/Baalbek, Lebanon

17
How did the Romans discover dry cleaning?
59
How did the Romans do division?
26
Did classical Romans wear any sort of swimwear?
58
Did the Romans eat breakfast?
26
When did the round house fall out of vernacular use throughout Britain and Ireland?
13
When and where was the first time moveable bridge?
6
How did the Romans salute the Republic?
23
Are there historical texts in England querying where Roman structures came from?