What is the basis of Russian criticism of Antony Beevor's work? [closed]

Ask Question
Asked 8 years, 2 months ago
Active 2 years, 1 month ago
Viewed 4k times
12
It's difficult to tell what is being asked here. This question is ambiguous, vague, incomplete, overly broad, or rhetorical and cannot be reasonably answered in its current form. For help clarifying this question so that it can be reopened, visit the help center.
Closed 8 years ago.

Some Russian sources make claims to the effect of "Beevor is revisionist and anti-Soviet propagandist".

What is the basis for this criticism?

For the antecedents of the question, see here.

The view of Beevor as a propagandist rather than a historian is based on the following points:

Use of unreliable sources

In his book "Battle of Berlin" Beevor gives the following claim:

Berliners remember that, because all the windows had been blown in, you could hear the screams every night. Estimates from the two main Berlin hospitals ranged from 95,000 to 130,000 rape victims. One doctor deduced that out of approximately 100,000 women raped in Berlin, some 10,000 died as a result, mostly from suicide. The death rate was thought to be much higher among the 1.4 million who had suffered in East Prussia, Pomerania and Silesia. Altogether at least 2 million German women are thought to have been raped, and a substantial minority, if not a majority, appear to have suffered multiple rape.

While giving no references to the "Berliners" who remembered screams and any connection between the screams and rapes, regarding the numbers Beevor gives the following footnote:

In fact, it is a reference to a book by German feminists Helke Sander and Barbara Johr "Befreier und Befreite: Krieg, Vergewaltigung, Kinder". The Beevor's reference hints that the estimates are by the hospitals and only quoted by Johr abnd Sander, which is untrue. The reference is thus a forgery.

In their book Sander and Johr define rape as any kind of sex with a person in power, including sex for food, prostitution, sex for getting job etc. This definition of rape is certainly not mainstream and does not reflect any country's criminal code. But Beevor does not warn the reader about the fact that Johr and Sander use a very specific definition of "rape".

The book includes an estimate of the rapes victims based on data from Berlin's clinic Kaiserin Auguste Victoria. From 01.09.1945 to 31.12.1946 this clinic registered 9 cases of rape by Russians (according the words of the women, as the clinic did not verify the validity of the claims): 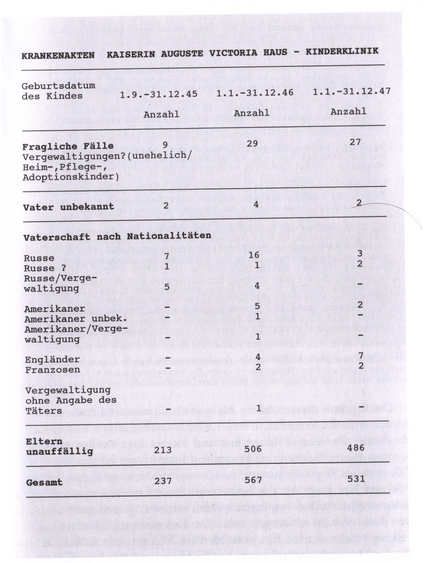 In total there were 32 cases of kids born whose father was Russian. Sander and Johr assume that all children born to Russian fathers were a result of rape, excluding the possibility of voluntary relationships (how a German Aryan woman can voluntarily engage with those subhumans?).

By assuming that pregnancy followed a rape in 20% cases (based in the data from Charité) they miltiply the figure by 5 to arrive at 57800. They then assume that all women from 14 to 18 and older than 45 were raped in the same proportion (oh yes, Russians do not differ between a young woman and a 80-year-old hag) so to arrive at the figure of 110000 raped, derived from 9 reported rape cases.

The second part of the Beevor's claim, that each 1 in 10 raped women died "mostly of suicide" as well as "2 million raped German women" Sander and Johr attribute to Gerhard Reichsling. Being named a "doctor" the reader may think that he was an employee of a mentioned clinic. This is not true, he was just a statistician. Sander and Johr say that he made the calulation for them privately.

Neither the methods, nor the data used in this calculation were ever published by Reichsling. It is thus impossible to verify the data because Reichsling is dead. Yet Beevor references him.

Use of anecdotal evidence

The rest of evidence which Beevor uses to support his claims and drive conclusions is just picked stories narrated by Germans or Russians, sometimes, third-hand accounts.

An example, a reference to an anonymous female diarist:

‘All in all,’ wrote the anonymous diarist on 4 May, ‘we are slowly beginning to look upon the whole business of rape with a certain humour, albeit of the grimmer kind.’ They noted that the Ivans went for fatter women first of all, which provided a certain schadenfreude.

Of course, Ivans, as subhumans have no sense of beauty.

The anonymous diarist even heard from one woman in the water-pump queue that when Red Army soldiers were dragging her from the cellar, a man who lived in the same block had said to her, ‘Go along, for God’s sake! You’re getting us all into trouble

These quotes are provided with references to a famous researcher:

Another exerpts from the book:

A daughter, mother and grandmother who were all raped together just outside Berlin consoled themselves with the idea that the man of the house had died during the war. He would have been killed trying to prevent it, they told themselves.

Besides this, the book is full of details which have no historical relevance such as descriptions of the "out-of-body" experiences of the victims:

Other women, both young and adult, simply tried to blank out the experience. ‘I must repress a lot in order, to some extent, to be able to live,’ one woman acknowledged, when refusing to talk about the subject. Those who did not resist and managed to detach themselves from what was happening appear to have suffered much less. Some described it in terms of an ‘out-of-body’ experience. ‘That feeling,’ wrote one, ‘has kept the experience from dominating the rest of my life.’

Use of slanderous language

Beevor does little to restrain himself in wording and language, sometimes attempting to attribute hate speech to unnamed witnesses. In many cases he makes collective accusations against Red Army soldiers:

The pattern, with soldiers flashing torches in the faces of women huddled in the bunkers to select their victims, appears to have been common to all the Soviet armies involved in the Berlin operation.

And, of course, these sub-humans all were alcoholics:

Most of the programme of stripping laboratories and factories was marked by chaos and disaster. Red Army soldiers who discovered methyl alcohol drank it and shared it with their comrades.

Apparently this statement is based on one instance of methanol poitioning described by Vasily Grossman, but the wording implies that all the soldiers did so.

After all the blame for the atrocities possibly should lay on the German authorities who failed to destroy alcohol in time so to prevent those savages to take it:

The worst mistake of the German military authorities had been their refusal to destroy alcohol stocks in the path of the Red Army’s advance. This decision was based on the idea that a drunken enemy could not fight. Tragically for the female population, however, it was exactly what Red Army soldiers seemed to need to give them courage to rape as well as to celebrate the end of such a terrible war.

In terms of human genocide he's right up there with the very worst of the 20th century alongside Mao and Hitler.

It's no coincidence that the loss of Russian life was almost as much as the German and allied losses put together.

No surprise then that the Russians don't think particularly highly of anyone who might criticise him.

Not the answer you're looking for? Browse other questions tagged world-war-two historical-research historical-criticism or ask your own question.

20
Did the poor performance of the Red Army in the Winter War significantly contribute to German underestimation of the USSR's military capacity?
12
What is the historical evidence behind the claim that the Soviet armies perpetrated mass rapes during their stay in Germany?
4
What was the German perspective on Stalingrad?

12
What Was the State of German Tank Design In Between the World Wars?
12
What is the historical evidence behind the claim that the Soviet armies perpetrated mass rapes during their stay in Germany?
3
Was the Dargah Shrine at Ajmer built over a Hindu temple?
15
What did the Soviets know about the Hunger Plan during WWII?
3
Do NKVD files say that during WWII, Soviet leadership knew about the rape of Soviet women liberated from labour camps and did nothing to stop it?
6
How do I organise my “What-if” research paper?
4
How, if at all, is published pseudohistory publicly addressed by scholars and academia?
2
In WW2, what was the barrel-change rate of the Bofors 40-mm?
0
How did Red Army achieve to manipulate German Army in 1942 and 1943?