What was the status of specialized workers during Greek times?

In Ancient Greece, what kind of social status would specialized workers have? Did they have any extra privileges when compared to the average person, and did they have less rights than rulers and other executives? If so, then what? By special worker, I mean people such as blacksmiths, jewelers etc.

I realize this is similar to the question on Rome, but this is sort of a follow up.

Ancient Greece isn't as cohesive as Ancient Rome, each city-state had its own social structures. I'll concentrate this answer to Athens only, and try to give you at least another answer for Sparta.

The earliest known division of the Athenian society is ascribed to Theseus, the city's legendary founder, with three basic classes:

Draco, the first legislator of Athens, introduced the Council of Four Hundred and extended the franchise to all free men who could afford military equipment:

[Aristot. Const. Ath. 4.3] And the Council was to be formed of four hundred and one members chosen by lot from the citizen body, and lots were to be cast both for this and for the other offices by the citizens over thirty years of age; and the same person was not to hold office twice until the whole number had been gone through, and then lots were to be cast among them again from the beginning. And if any Councillor, whenever there was a sitting of the Council or Assembly, failed to attend the meeting, he paid a fine of 3 drachmae if of Five-hundred-measure rank, 2 drachmae if a Knight, and 1 if a Teamster.

Solon, in the early 6th century BC, with his Constitution introduced a structured timocracy in Athens. Solon's timocracy is an early form of meritocracy and divided the population in four tiers, by measuring how many bushel of produce each man could produce in a year:

The Athenian Constitution was quite complex, here's a diagram based on Aristotle's observations: 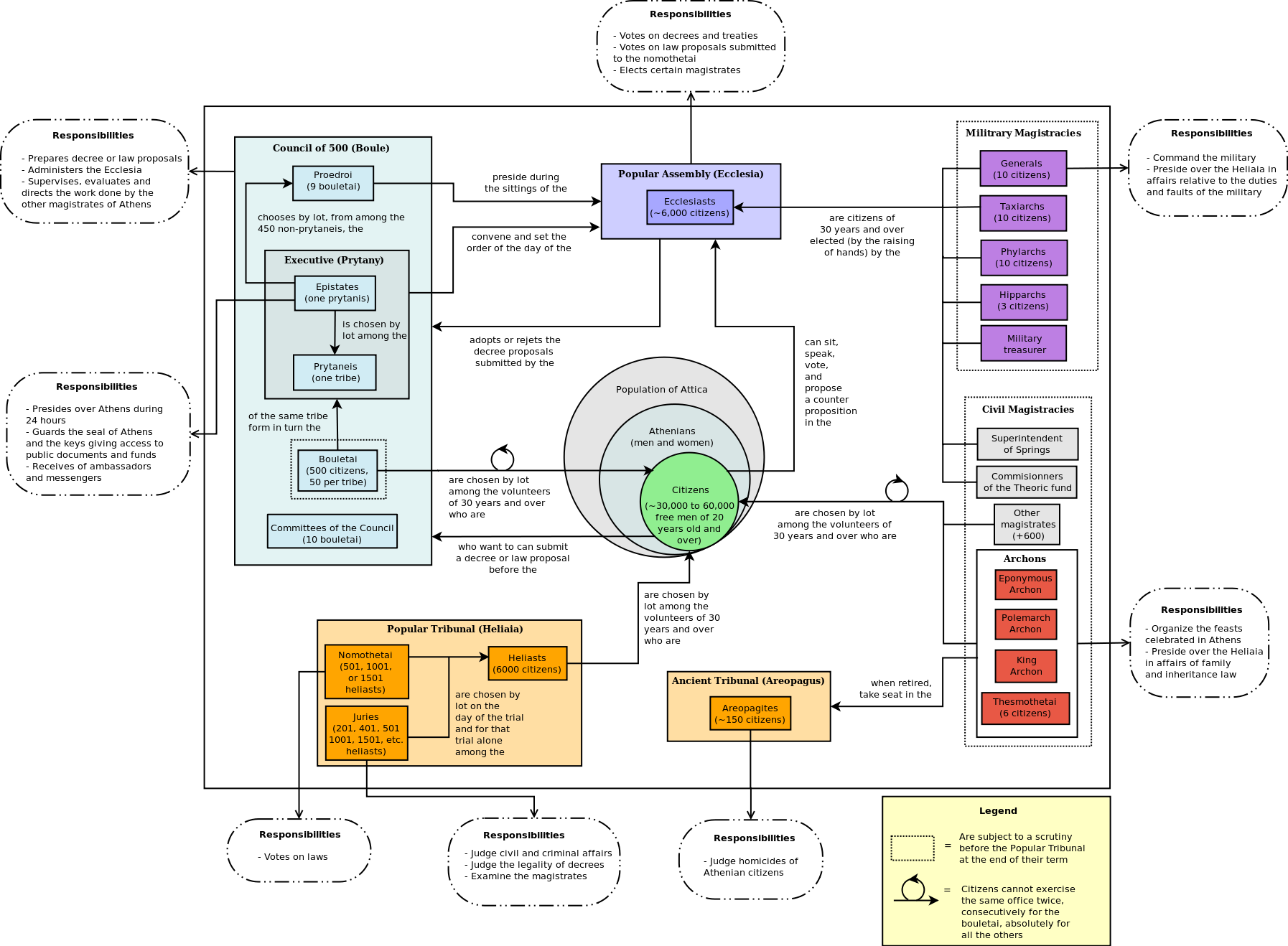 The Pentakosiomedimnoi and the Hippeis were eligible for all positions of government:

The Zeugitae were not eligible to serve as Archons (or at the Areios Pagos, since its members were retired Archons), until 457/6 BC when archonship was opened to them. The Thetes only had access to the Heliaia and the Ecclesia.

Solon's timocracy is, however, only relevant to citizens (and more specifically adult males), while most specialized labourers at the time were Metics or slaves. Metics were mostly immigrants of Greek descent or freed slaves, held lower social status and were subject to taxation and enslavement for a variety of offences. They could be awarded isoteleia, a privilege that freed them of taxes and placed them above other Metics, and in very rare occasions full citizenship.

In Politics, Aristotle mentions that:

in some states manual laborers were not admitted to office in old times, before the development of extreme democracy

While mostly based on his observations of the Athenian society, there's also a relevant mention to Thebes:

At Thebes there was a law that no one who had not kept out of trade for the last ten years might be admitted to office.

Lastly, the hetaerae were highly educated courtesans, and perhaps the only women that were influential in Athenian society. While they often offered sexual services to their patrons, they held a high status, comparable to Geishas. Slave prostitutes of the era were known by a different name, pornai, and were owned by a full citizen or a Metic.

The rest you can read in Aristotle's Athenian Constitution and Politics (especially the third book), and Theophrastus' The Characters, where through his outlines of thirty moral types you can deduce valuable information for the social classes of the era (for example, he lists pimps next to cooks as an ordinary profession). If you are interested in contemporary social commentary you should also look at Aristophanes' satirical plays, most (if not all) of which are deeply political and revealing of the Athenian society.

Not the answer you're looking for? Browse other questions tagged ancient-greece social-class or ask your own question.

8
Benefits of Athenian citizenship
9
What was the status of specialized workers during the Roman times?

9
What was the status of specialized workers during the Roman times?
5
Was Eumenes really a non Greek by birth?
16
Why was not Greek alphabet adopted by other languages given the Greek influence?
4
What was the average weather during the times of the Ancient Greeks?
4
Did being a "Philhellene" in ancient times mean you were not a Greek?
1
What was the status of travelling perfomers in the Middle Ages (specifically, 13th century Germany)?
10
Who was a "gentleman" in USA in the times of Tom Sawyer?
9
What sort of temples existed in small Greek villages?
10
What were the requirements for Ancient Greek colonist groups?