We found these two identical coins in our garden (near Wuerzburg, lower Franconia / northern Bavaria):

Coin side A: coat-of-arms of sorts: 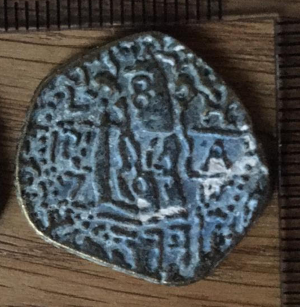 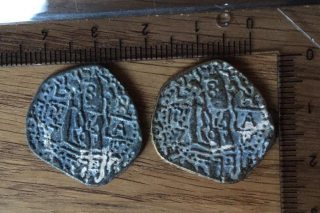 (the scale units are centimetres / millimetres)

Coin Side B - "templar-type cross": 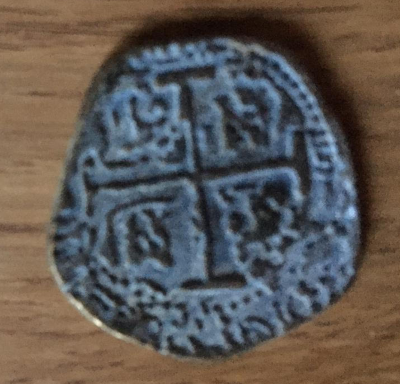 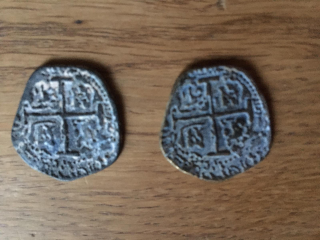 Unfortunately rather eroded, and apparently notably cut / sheared off around the outside. It looks like one side has a Templar-Type cross, with some symbols or heraldic signs between the arms of the cross. The second side bears a shield / coat of armor, surrounded by letters (clockwise from top right, 'H' ? , 'A', 'W' ? , '7' / 'Z', 'P', 'L', '8' ?).

Very curious what these would be.

The design doesn't match what I can find online about coins minted by the local mint in Wuerzburg, nor in fact does the "cross" design appear common in German medieval coins at all. The cross design reminds me more of French Guenars / English Groats, but the heraldics aren't fleur-de-lis / Plantagenet lions.

Anyone got an idea what these may be ?

They are specifically Spanish 2 Escudo Doubloons minted between 1651 to 1773, or modern replicas - as they are identical, it would seem to suggest the latter. This Amazon seller đź•‘ appears to have identical coins. 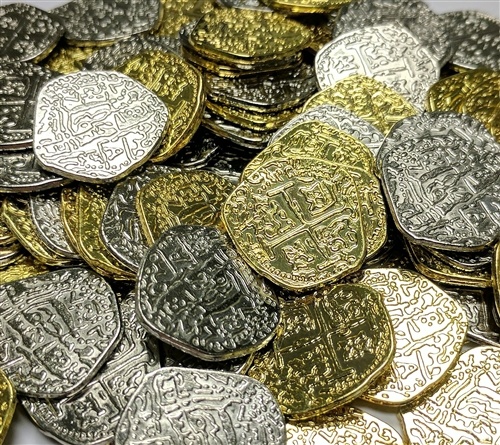 Image from https://www.eaglegames.net/Empires-Age-of-Discovery-Metal-Coins-p/101617.htm, used with permission of Eagle Games.

Note As @Volker Siegel said in the comments:

Do not try to clean them any further. Dirt and patina may reduce the value somewhat, but traces of cleaning much more so.

I am certain this is a Spanish Real.

The real (meaning: "royal", plural: reales) was a unit of currency in Spain for several centuries after the mid-14th century. It underwent several changes in value relative to other units throughout its lifetime until it was replaced by the peseta in 1868. The most common denomination for the currency was the silver eight-real Spanish dollar (Real de a 8) or peso which was used throughout Europe, America and Asia during the height of the Spanish Empire.Wikipedia intro to Spanish real

The Spanish Real has a very wide variety of designs but the one I could find closest to yours is one from 1588 on ebay.

You can notice the cross is surrounded by 4 shapes representing castles and lions similar to yours. Also the dots around the cross and the letters surrounding it appear on your coin. 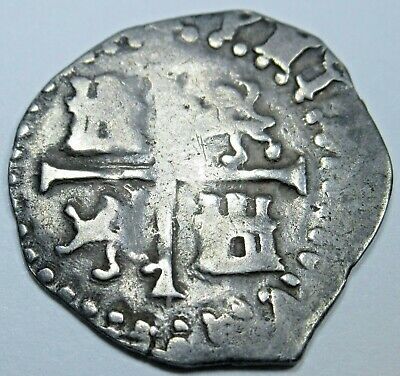 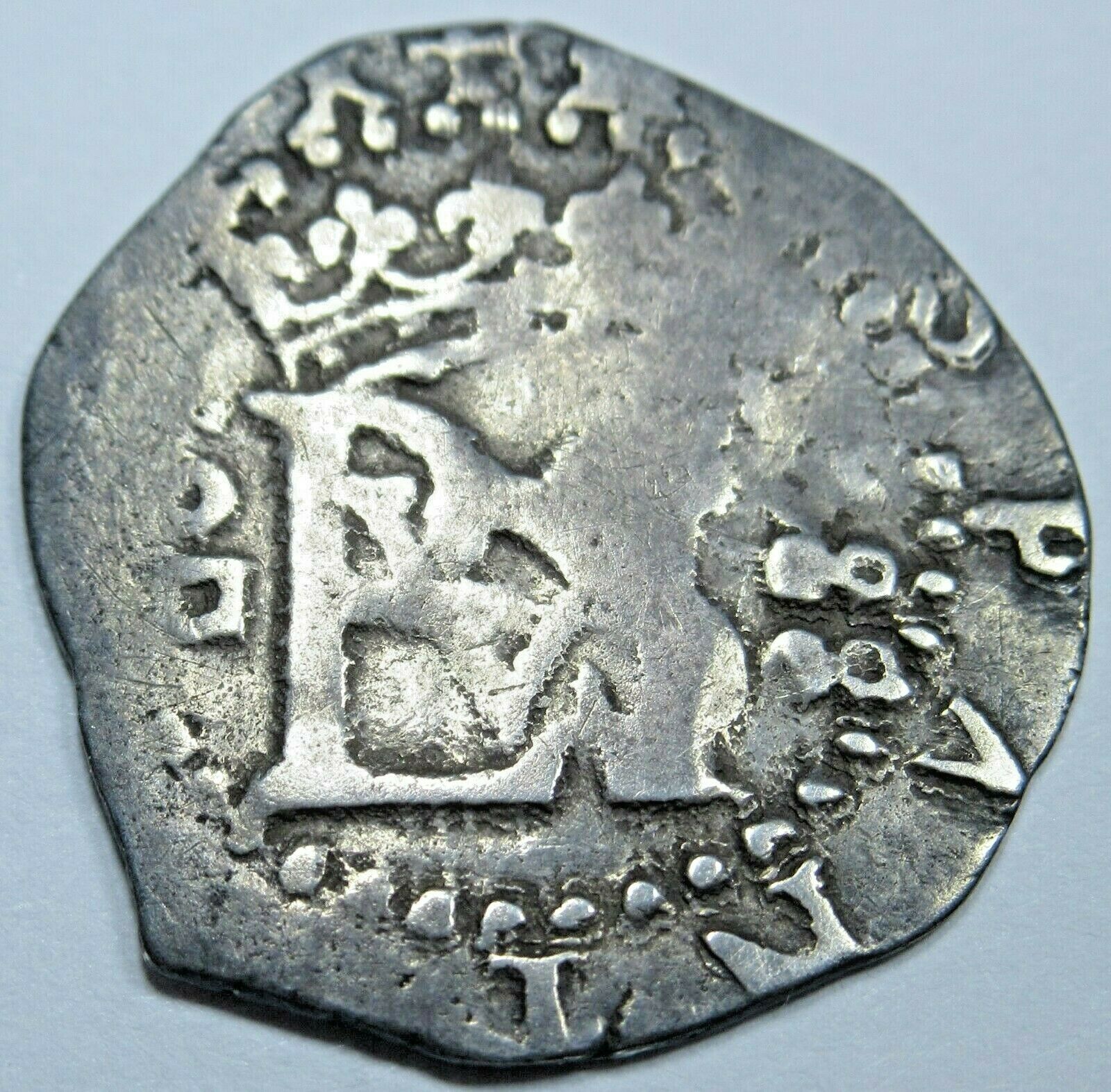 Picture from seller on ebay

As you yourself have found based on this preliminary answer, is a minting much closer than the one I have found and will therefore incorporate into this answer. 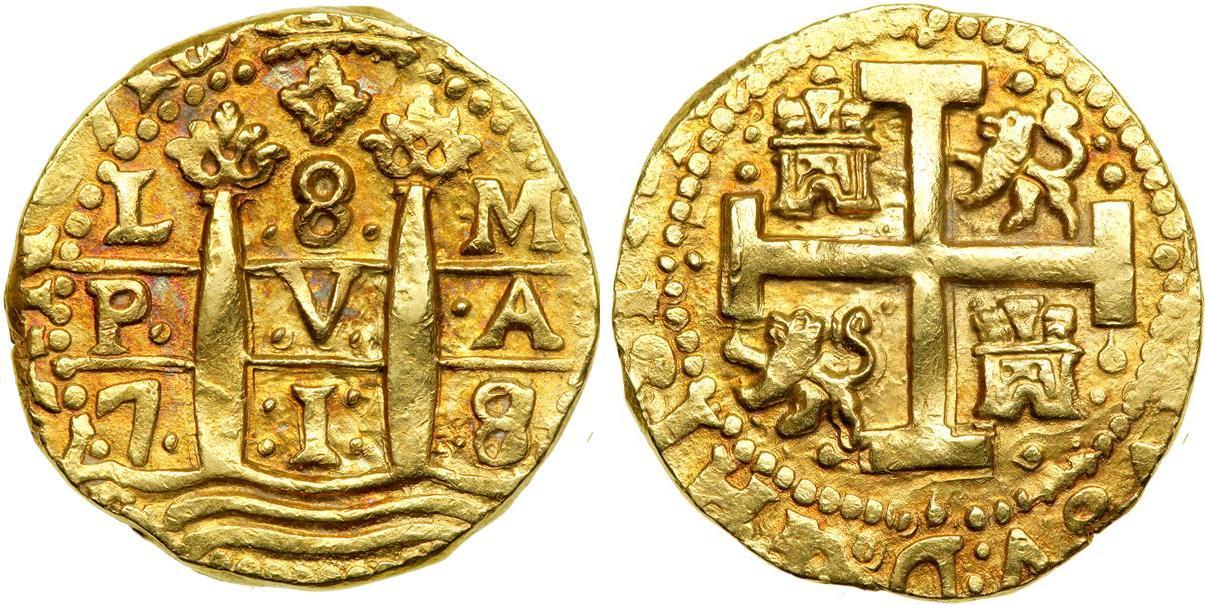 The details on this coin correlate with the details of the coin you have found.

As you noted in your question:

Unfortunately rather eroded, and apparently notably cut / sheared off around the outside.

Erosion is relatively normal for coins that age, with exceptions of course. The noticeable "shearing" or "cutting" could be because the coin was too heavy after minting and needed to be clipped until the proper weight was achieved.

5
Please help to identify these coins
3
Need help identifying 2 old coins? Struck coins, one with two standing human figures facing each other
8
What is the largest hoard of coins ever found?
4
Identify two Medieval Indian coins
1
Can anyone help me identify this old coin?
3
Can anyone identify this coin found in Spain?