Was “money to get the power, power to keep the money” a motto of Lorenzo de Medici?

This same Lorenzo the Magnificent represented a family of merchant princes whose charming motto was the forthright declaration: "money to get the power, power to keep the money." Rarely has anyone expressed the essence of politics so pithily.

Several websites state that was his motto. However, I cannot find an "official" confirmation of this. I've googled motto of the house of Medici and that of Lorenzo and the answers are different. The article Meet the Medici suggests that Lorenzo's one was "Whoever wants to be happy, let him be so; of tomorrow there is no knowing". This and other sites suggest it was instead "Le temps revient".

Is there somewhere conclusive evidence of the true motto of Lorenzo de Medici?

Part of the confusion here may hinge on what is meant by motto. For the purpose of this answer, I considered the motto to mean the published, heraldic device associated with an individual or family, usually well recorded and researchable. From the wiki article on motto(emphasis mine):

In heraldry, a motto is often found below the shield in a banderole; this placement stems from the Middle Ages, in which the vast majority of nobles possessed a coat of arms and a motto.

So you can see when discussing renaissance era individuals, this would be the form of motto which would be most relevant. A personal 'slogan', principles, or business philosophy followed might differ from the motto, but the motto is historically defined. The question may be confusing someones interpretation of Medici philosophy or behavior being called a motto.

Instead of websites, look to books for the answer. Two different biographical works both confirm the personal motto of Lorenzo de Medici as "Le temps revient".

Page 96 of the book The Life of Lorenzo De' Medici, Called the Magnificent Volume 1 By William Roscoe · 1797 has the following entry:

A more recent work, Magnifico, The Brilliant Life and Violent Times of Lorenzo De' Medici By Miles J. Unger · 2008, has a section discussing Lorenzo's banner and motto on page 153, and its relevance to the Medici motto: 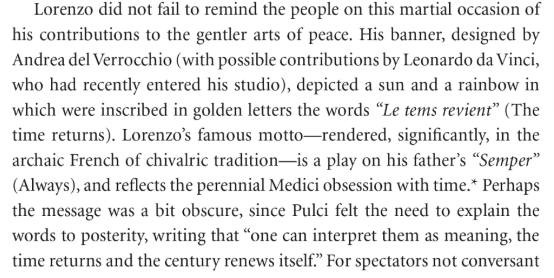 Two different biographies written several centuries apart both list the motto as "Le temps revient". Now its tough to prove a negative, but I find no indication of the other phrase in any biographical source I looked at.

I think there exists confusion on two fronts with regards to this question. Firstly, however, I note that the specific primary issue of Lorenzo de' Medici's motto has been sorted above by justCal. The secondary issue -- that of where the OP's quotation came from and what it meant -- also deserved a look, which I've done here.

I wanted to expand on the confusion behind the question though which relates to the article by R Higgs, 'The Economic Policy of Machiavelli's Prince'. In that article, the quotation, as given in the OP is:

This same Lorenzo the Magnificent represented a family of merchant princes whose charming motto was the forthright declaration: “money to get the power, power to keep the money.”

Some digging also highlighted the alternative (and seemingly more common) result in English:

Their value system embraced the slogan of the Medici family in fifteenth-century Florence: "Money to get power, power to protect the money."

Regrettably, both of these are unsourced. The first version is also mentioned here (paywalled), also unsourced:

In any event, the Medicis may have provided one of the earliest and most incisive analyses of the relationship between economics and national security in their durable motto: Money to get the power. Power to keep the money.

Montecuccoli served alongside Mattias de' Medici, son of the Grand Duke of Tuscany and one of the richest man in the Italian pensinsula, whose unofficial family motto was “money to get power, power to protect the money”.

Another mention exists, this time along with a reference, in this document but the reference is not part of my Google Books' Preview.

... summed up by the Medicis of Renaissance Florence, who followed the creed "Money to get the power, power to keep the money".

In all of the above cases the emphasis is actually on the family of Lorenzo de' Medici and not on Lorenzo himself. Further, the descriptions use "creed" & "slogan" alongside "motto" (relevant emphasises added above), implying something less than official (with one text specifying this as the 'unofficial motto'). While sources for much of this are poor, sources for other actual mottos of the Medicis are in more evidence. However, with regards to the specific OP quotation, the emphasis in all accounts is on the family and not on an specific family member, implying that we are looking at a coherent idea which guided the Medici and not a more formal motto.

Firstly, I note again that the primary question of Lorenzo's motto was answered by justCal. Secondly, I also met the goal of introducing the background to the OP's quote. However, I also wanted to share other examples of the formal mottos that were used by the Medici (as they turned up in the searches):

The question is not 'bad' per se, but its frame of reference is unlucky and the phrasing potentially contradictory. Just nevermind that the original info for this may seem to be contradictory in itself.

Q: Was “money to get the power, power to keep the money” a motto of Lorenzo de Medici?

Q: Is there somewhere conclusive evidence of the true motto of Lorenzo de Medici?

The first question can be answered with: 'yes, this was a motto to be found. The second question is different, asking for a "true" motto, and that is quite more difficult to answer.

That is rooted in what such a motto is and represents. An overarching guideline, an uplifting quote, inspirational, a goal to achieve, a representation of character, and the list is longer than you will endure in this answer. This is sometimes a 'stable' formulation, like for non-personal institutions, sometimes a quite fast changing slogan. Think of election campaign mottos: that used on a the first run is most likely a different one than the second, four years later. A motto is a tool, and not a law. It is useful and changeable according to usefulness, not set in stone and in continued use, even if no longer applicable, valid, or liked.

Another motto in the sense of 'a guideline' that often appears in connection to Lorenzo is the "do ut des" (I give so that you give). This principle of reciprocity and usefulness may be just ascribed to him as a description of how he conducted his actions or negotiations.

However, as the quote from Miles Unger shows, "Le tems revient" is one such motto used. (As referenced in JustCal's answer, and stated unquestion also here. And yet, another motto is quite possible. In Italian there are three words to describe this in slightly different usage scenarios: motto, divisa and impresa.

If then we look at such occurrences the Uffizi museum lists this, with "motto" in the Italian original:

This two-handled vase, made in a single block of red jasper, sits on a circular silver base, decorated with large opposing flute design and inserts in translucent enamel, with plant and floral motifs. The mount of the lid - also in silver - features a depiction of the diamond ring and three feathers tied by a scroll marked “SEMPER”, used as their emblem by members of the Medici family since the mid-15th century. The lid is topped with a moving globe, decorated by balls in red enamel, a clear heraldic reference to the Medici’s coat-of-arms, under an element that again shows the diamond ring. The vase is marked with the letters “·LAV·R·MED·”, the initials of Lorenzo de’ Medici, known as the Magnificent.

And one such impresa, that hung in Lorenzo's chambers and was apparently made for his own birth is again:

This commemorative birth tray (desco da parto) celebrates the birth of Lorenzo de' Medici (1449–1492), the most celebrated ruler of his day as well as an important poet and a major patron of the arts. Knights extend their hands in allegiance to an allegorical figure of Fame, who holds a sword and winged cupid (symbolizing celebrity through arms and love). Winged trumpets sound Fame's triumph. Captives are bound to the elaborate support. The three-colored ostrich feathers around the rim are a heraldic device of Lorenzo's father, Piero de' Medici. Painted by the younger brother of Masaccio, it was kept in Lorenzo’s private quarters in the Medici palace in Florence.

The armorial device is that of Lorenzo de’ Medici’s father, Piero de’ Medici: a diamond ring with three ostrich feathers and a banderole with the motto SEMPER (forever). The device is much worn and the silver is oxidized.

This all doesn't get any better if we just look at the starred Italian version of Wikipedia for Lorenzo. That has a section info-box that clearly lists:

Whatever in this context a "true motto" is supposed to mean. I do not know that on the one hand from the info available to me, including all answers in this thread, and then on the other I wouldn't ascribe too much insight into any one of these mottos anyway.

'Mottos' ascribed to Lorenzo are numerous. As an example:

In the painting, Vasari conveys how Lorenzo prudently listens to the suggestions offered by a beautiful mask crowned with laurel, which pours water from a spout through a mast into a vase. A Latin inscription in the mast,«Praemium virtutis» («Virtue rewards» or «Honor is the Reward of Virtue»), is Ciceronian42. In the painting, the motto al- ludes to how Lorenzo is recognized by his compatriots and the country for his political triumphs. This scene contrasts with the other objects next to Lorenzo, an ancient vase with a Latin inscription, «Virtus omnium vas» or «Virtus omnium veritas» («Virtue conquers all things or Truth conquers all things») or «Virtutum omnim vas» («The vessel of all virtues»). This motto further emphasizes Lorenzo's virtues of courage and fortitude exercised in moments of political treachery. These Latin inscriptions allude to Lorenzo's ability to triumph over slander and calumny with truth, courage and prudence. Vices such as slander and calumny tend to camouflage or conceal their intent. A mask covers their deceit and shields their weakness.[…]

This conceit derives from Giovio's impresa for the Medici family (Fig. 22)54. The impresa is based on a Medici family design of three intertwined diamond rings with the motto «Semper» («Forever»). Cosimo Il Vecchio, Lorenzo's grandfather, selects this design to indicate the close royal connection of the Medici with France and Spain. Lorenzo adds three plumes with different colors, green, white and red, indicating that when an individual follows God's love, three virtues will flourish in one's life: Faith (Fides), Hope (Spes) and Charity (Caritas). In the painting, Vasari appropriates Giovio's description for the Medici Impresa, associating the white plume with Faith, the green plume with Hope, and the red plume with Charity. 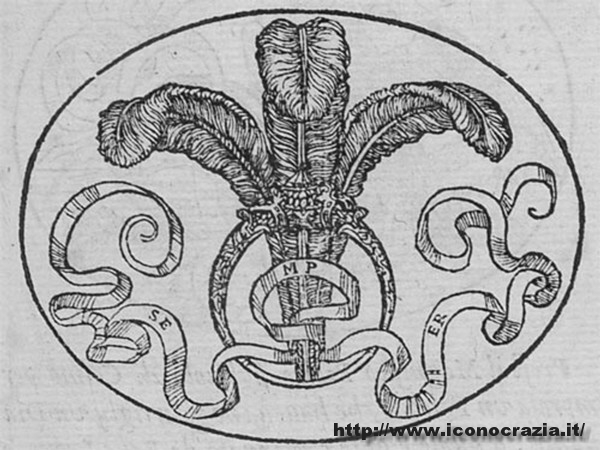 Not the answer you're looking for? Browse other questions tagged reference or ask your own question.

12
What was Poland's involvement in the Vietnam War?
11
What was the “Brakteaten” medieval monetary system?
5
What was the condition of women in “primitive societies” around the world?
27
Was Rosie the Riveter sourced from a Michelangelo painting?
11
Why was the Soviet Naval Infantry disbanded in 1947?