Was there a contemporary understanding that 1706 was an exceptionally poor year?

This relates to the numerous (British) news items which seem to have overnight turned the present virus-induced economic downturn into a 'historic downturn'. While there are opinion-based aspects that can be used in the reply here, I don't know how these could be quantified easily, so I've gone for the better aspect of whether the contemporaries felt that 1706 was a poor year (much as many of the people living in 2020 might be feeling that).

Overnight (or late yesterday), many British publications seem to have got the idea that the 2020 economic slump is "the biggest since 1706". A Guardian article references the ONS data series along with year-on-year comparisons while another used this turn of phrase:

1706 is how far economic historians have to look back to find a slump bigger than the one that now threatens the country as a result of the Covid-19 pandemic.

The economy was at the mercy of the weather. Three years after the slump of 1706, the country was in trouble again due to the Great Frost of 1709. It helped trigger a 14% drop in activity – a much more severe setback than the pricking of the South Sea Bubble in 1720.

Firstly, I wanted to find the Bank Of England article which actually stated this from the last few days. I was unable to do that (not that it is that important), with their yesterday's releases not mentioning historical comparisons, searches on the BOE site coming up empty for the specific reference, and none of their historical datasets looking as if they'd represent this aspect of the economy. It seems to have been a non-standard publication from the BOE in any case and I've noted referenced to it below -- but it was not a recent BOE newsitem / statement. The ONS, which should be more apposite for this, has a GDP dataset that only goes back to 1946 (makes sense).

However, I did finally find the best actual dataset for this which is based on a 2017 BOE publication: 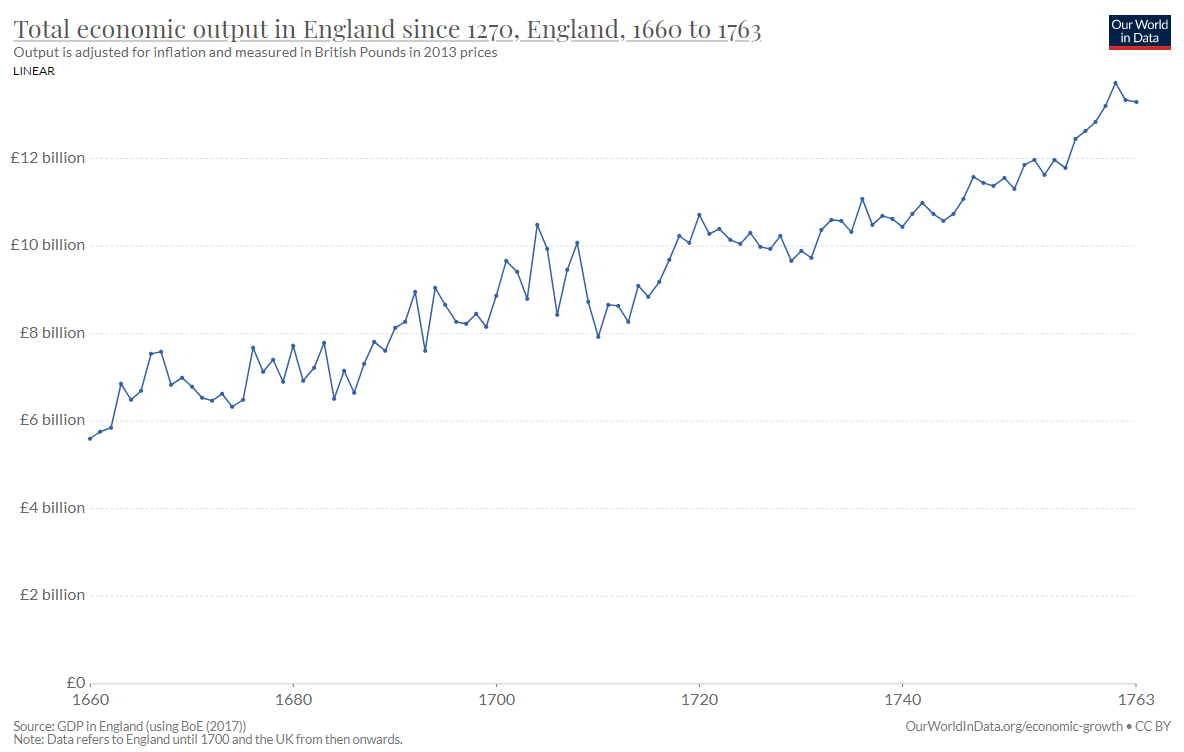 The WP English economy article doesn't mention 1706 in any way as a particularly hard year. Before this, my own knowledge of the 1700's economic part in Britain extended to the results of the union with Scotland (pay-offs, etc...) and the Great Storm of 1709. Further, the article that produced the data series also doesn't specifically mention 1706.

Further, the above graphic also illustrates many similar over-yearly 'slumps' between 1660 and 1763, with the severity of these changing over time and lessening towards the tail end of this graphic.

The Guardian article mentioned above used this graphic to show how bad 1706 was which conveniently starts at 1701, not giving much time for the previous annual changes to show up. 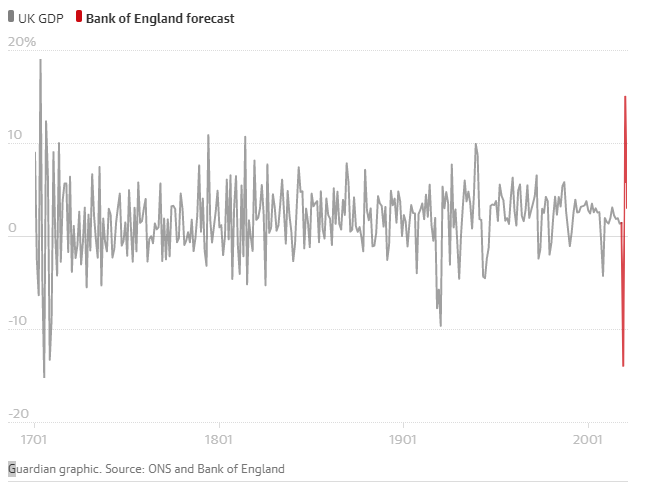 Keeping in mind the trends I've highlighted above from 1660 to the 1700's, and that the economy was primarily agricultural, it looks to me based on the numbers that the downturn in 1706 was not 'significant'. The lack of mentions for a specific downturn in that year (as opposed to the examples of the Storm of 1709 and South Sea Bubble that can be found with ease), brings me to ask: Was there a contemporary understanding that 1706 was an exceptionally poor year?

It's impossible to prove the negative, but such statements are unlikely to be found because bad years were frequent and nobody was tracking the data at the time. The data shows that 1706 wasn't an especially bad year, just that it might have been slightly worse than the others compared to the immediate year previous. Similarly steep annual declines had been seen before and without official data, the relatively small difference estimated to have existed between 1706 and other bad years would have been imperceptible. It wasn't until the twentieth century that statements like "the economy is bad this year" became common sense. Before that, only if there were several very bad harvests a few years in a row (as in the 1840s potato blight) would I expect the historical record to show people noticing something unusual.

17
Can it be justified that an economic contraction of 11.3% is "the largest fall for more than 300 years"?

9
What was the reason for inflation in Britain after the Black Death?
11
Why did Britain decide to issue perpetual bonds during Napoleonic era?
6
Index of importance / economic value various minerals during the Industrial Revolution
8
What was the effect of the Civil War on the cost of cotton?
17
Can it be justified that an economic contraction of 11.3% is "the largest fall for more than 300 years"?