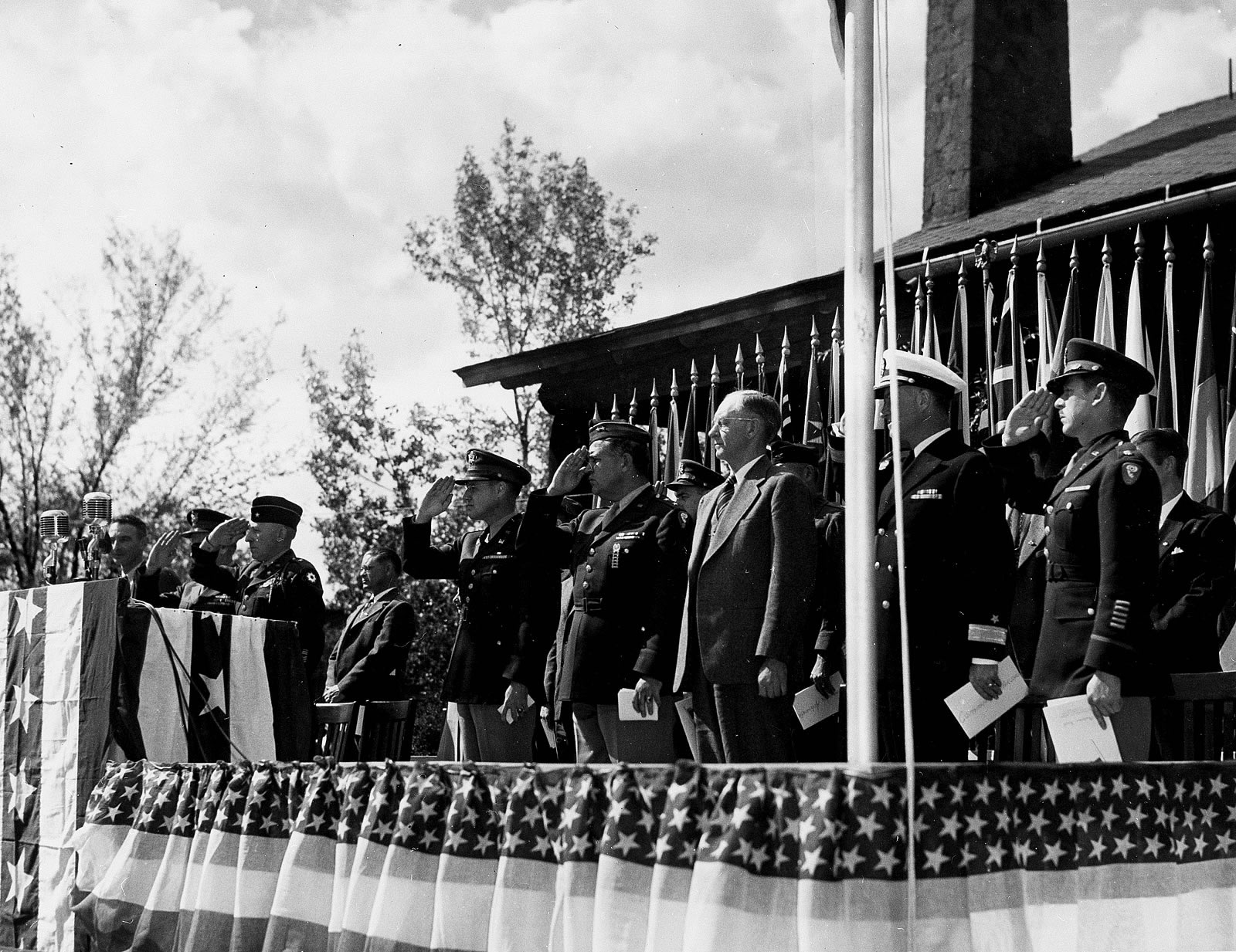 In this photo, a group of important people involved in the Manhattan Project can be seen at an award ceremony in 1945. The description says

Presentation of Army-Navy E Award at Fuller Lodge, Los Alamos, NM. J Robert Oppenheimer is at left. Colonel Nichols, commander of the MED is in the center, wearing glasses. To the right is Major General Leslie Groves, commander of the Manhattan Project; Robert Gordon Sproul, the President of the University of California; and Commodore W. S. Parsons

The fourth man on the left is strikingly similar to Robert McNamara, among other things Secretary of Defense of the USA, although to an older McNamara, he was only 29 at the time.

Is that possible? Is it only a resemblance?

You mean the shorter man in civilian clothes, who is not saluting? If so, probably not Robert McNamara who at the time was a serving officer and would have been in uniform. And, whose job at the time had nothing to do with Los Alamos, and at the time was not famous or important enough to be at such an occasion.

It's just a resemblance.

This is a photo of the Army-Navy "E" award ceremony at Los Alamos on 16 October 1945, the last day of Robert Oppenheimer's tenure as director. The event was filmed; see also. The tall civilian to the left of the flag pole is Robert Sproul (the then president of U.C. Berkeley), the tall man at the extreme left is Robert Oppenheimer. It is clear from the film that there are two rows of seats on the podium, and that the subject of this question is seated at the last chair of the second row of seats, at a moment when Oppenheimer has removed his hat during a salute, when everyone is standing.

I had thought that it might be Harley Wilhelm, whose parted hair looks a bit like your subject's, and whose age seems closer to the mark, but his award was made on 12 October in Iowa. Maybe its Norris Bradbury, who became the second director the following day. Norris had left active duty in the Navy to be able to take this post. In the film one can see the subject receiving a handshake from William Parsons, the naval officer just to the right of the flag pole just minutes before Oppenheimer received a diploma from Groves.

10
Where was the Japanese surrender signed on Okinawa in June 1945?
23
Why didn't Henry A. Wallace become President in 1945?
7
German submarine force ceasefire on May 4 1945
4
Identification of Aircraft, Weimar, Germany, May, 1945
4
How do present-day Austrians look back at the 1938 Anschluss?
2
Were there any German submarines sunk after 25th of April 1945?
1
What was the postage from Japan to US in 1945?
4
Was the 1939 Red Army more disciplined / better behaved than the 1943-1945 Red Army?
24
How much did J. Robert Oppenheimer get paid while overseeing the Manhattan Project?
25
What exactly was East Prussia between 1933 and 1945? Was it part of a larger government, and which one?