In this CNN article an old lady from Dillon, South Carolina, recalls her memories from World War II and mentions not just fearing bombs from airplanes, but actual measures being taken against aerial bombardment: blackouts and voluntary spotters.

A few years later, her high school graduation was canceled when a blackout went into effect. World War II was underway, and there was a threat that airplanes would bomb the area.

" (...) and someone told me there was a bomb threat, that airplanes were going to fly over and they didn't want the lights shining."

The blackouts and the war made life challenging, but Shelley rose to the occasion. The teenager became a volunteer spotter, and would spend Sundays on top of the local department store. "All you had was a telephone, binoculars, and a big chart with pictures of the airplanes underneath so when you looked up you could identify them."

Some of that could suggest just some reasonable mass panic just after Pearl Harbour ("someone told me there was a bomb threat") but blackouts and spotters seem something more organized as if some authority has taken seriously the danger of air attack. At first sight, the blackout could be to prevent submarine attacks, but Dillon is about 100 km inland and the article clearly states that spotters were given identification charts for airplanes, not for submarines.

We have the benefit of insight and we know that neither Germany nor Japan had the means to air bomb North American mainland, but that might have been seen in a very different light during the war.

Then, my question is whether the danger of air attack on the East Coast was taken seriously and if measures of defence against it - like widespread blackouts and spotters - were put in place.

This related question just hints that providing AA guns to shore batteries in the East Coast wasn't a priority, but that's just assessing that it was better to send the scarce AA guns to other places which were actually under air attack and it doesn't make clear if the East Coast was seen under threat, even in a lesser degree. 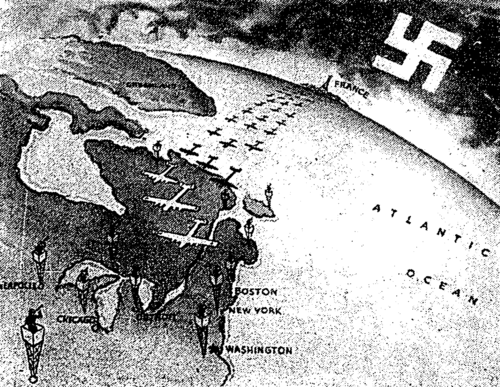 Short Answer:
Very seriously. on both coasts. In retrospect more serious than was probable reasonable. A US air and sea defensive system was brought online beginning in 1940 modeled after the British front line air and sea programs which at the time were winning the Battle of Britain. Their were millions involved. Plane spotters and air wardens and coastal defenses built on both coasts. But beyond the coasts the program was active hundreds of miles inland and around the country. Submarines were an especially big issue on the east coast early on. German submarines patrolled and took merchant shipping within eyesite of America's largest cities.

The War That Never Came: Civilian Defense in Cincinnati, Ohio During World War II
During World War II the Office of Civilian Defense (OCD), a federal agency, encouraged more than ten million Americans to volunteer their time and effort for all types of defense-related activities that provided psychological and material benefits for the home front. The agency's top priority was civilian protection. By the summer of 1941, air raid precautions modeled after Great Britain's during the blitz had been developed in the United States. Treated solemnly by many, especially in the aftermath of Pearl Harbor, civilian protection was seen as America's last line of defense. 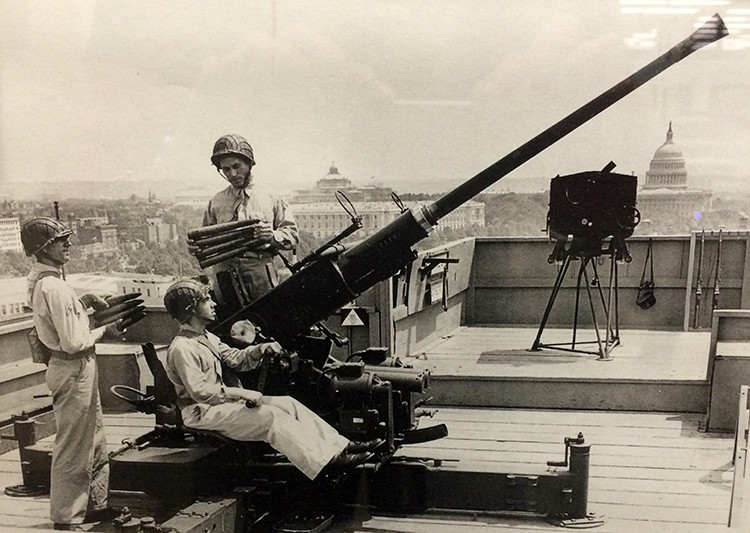 Detailed Answer:
In the 1960's I toured a series of watch tower fortifications on the DelMarva Peninsula. They were basically concrete bunkers with a tower for coastal watching. These were built all up and down the east coast. On the coast both planes and and ships were aggressively watched for. They also looked for spies and sabatours landings on the beaches. Caught a few too.

7 crazy things the Coast Guard did during World War II In June, 1942, a German U-boat surfaced off the coast of New York and dropped off a team of four saboteurs that made their way to the coast. Their goal was to cripple U.S. aluminum production and hydroelectric power production through a terror campaign, weakening the U.S. and hopefully coercing the U.S. population to vote against the war. The endeavor was quickly foiled thanks to the Coast Guard beach patrol.

I remember a German u-boat commander Hardegen, who sank about 24 ships in American waters on two patrols in 1942. The most famous one which always sticks with me was one I heard about as a kid, many years after the fact. He sank a ship right off the coast of Coney Island, New York and people on the Ferris wheel got a good view of his Uboat. Commander Hardegen was a very professional fellow. He had hit the merchant man with a torpedo and it was on fire but still afloat. Commander Hardegen then surfaced to finish the ship off with his deck gun. Only he decided to circle the ship and come in from the shore side so his deck gun would not accidently take out people at the amusement park. ( we know this because he was interviewed after the war. ) Only when he did so his uboat was illuminated to the horrified people on shore could see his ship go in for the coup de grace. It was a kind of game changer at the home front. That really struck home with the people of the US.

I also have some pictures of my Grandfather who was an air warden in Cincinnati Ohio. He had an armband and a WWI style helmet. When I questioned him about it, as a kid. He said they did things like plane spotting and walked the streets during black outs to make sure people turned off their lights or if in a car pulled over and turned off their headlights. Cincinnati is about 600 miles from the coast.

One more story for you. Washington DC is about 200 miles from the coast. During WW2 there were anti aircraft guns placed around important American Cities including Washington DC. One of these sites on the Capital Mall right near the federal center (legislature, and whitehouse). The soldiers manning there gun fired it. Not sure if it was because they misidentified a plane or “the battery went off by itself”. The net effect was they hit/shelled the Lincoln memorial. The us park service at the memorial will proudly state that the Lincoln Memorial is the only Federal Memorial ever to come under fire during war time. Always thought that their pride kinda came at the expense of the US army. 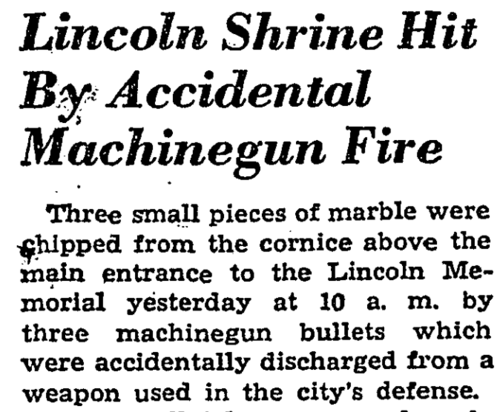 Washington During Wartime One overeager air defense soldier accidentally machine gunned the Lincoln Memorial in 1942 (seriously, this actually happened). Unfortunately, the only contemporary news coverage of this incredible event was a brief Washington Post story, and an even shorter NYT blurb.  

Ironically, it was Japan, nominally the weaker of the two powers, that gave credence to these fears.

It's only with the benefit of hindsight that we know that Germany was not a real threat to the bomb the east coast.

So while there was no "real" German threat, there were just enough reasons, given the "fog of war," for people on the American east coast to plausibly fear and take precautions against a German bombing threat.

Not exactly the East Coast but the Soo Locks in Michigan were vital to the US war effort (90% of the country's iron ore went through them at the time) and were heavily guarded.

At Capt May, New Jersey, where my family used to go for summer vacations, there is or was a concrete tower built to watch the coast. The last time I was in that part of town I didn't see it, and I can't find it on Google Maps, so maybe it has been demolished.

On the beach, almost to Cape May Point, there is Battery 223, a concrete gun emplacement b about 100 feet by 50 feet. The last time I saw it it was a crazy and terrifying structure, a huge concrete building supported above the ground by many wooden pilings. It was originally more or less buried in sand dunes and has been uncovered by erosion by the sea. Battery 223 was completed in 1943 and decommissioned in 1944.

So I have never doubted that the US government took coastal defense very seriously during World War Two.

It is not so easy to find concrete evidence of air raid concerns. But no doubt a significant proportion of the US public was worried about possible air raids, and so the government instituted blackouts and air raid drills and other precautions partially to humor those people and partialy to be prepared just in case.

Yes it was. US airplane manufacturers like Boeing and Lockheed moved their factories to the Middle of the US to build planes and bombers, Believing the German's couldn't traverse "Flyover" country, 1000 miles inland to attack crucial factories.

Not the answer you're looking for? Browse other questions tagged world-war-two united-states bombing or ask your own question.

2
What kind of AA defenses did the US East Coast have around the time of Paukenschlag?

11
What effect did awareness of devastating bombing at home have on the fighting spirit of German troops on the Eastern front?
8
Scaffoldings on Taj Mahal?
2
Did the atomic bombing of Hiroshima and Nagasaki contribute to Japan's surrender?
6
Did the Marshall plan only give back a part of what was taken?
60
Why didn’t Japan attack the West Coast of the United States during World War II?
111
On 1941 Dec 7, could Japan have targeted the Panama Canal instead of Pearl Harbor in a surprise attack?
2
What kind of AA defenses did the US East Coast have around the time of Paukenschlag?
3
How strongly defended was Baku in 1942?
8
What alternate north-south supply routes did the Soviet Union have when the Volga and Stalingrad were under attack?