What is the meaning of the cross on a Chinese bronze Gu Chalice?

The ancient Chinese had a bronze chalice called the Gu 觚, some of which feature a square cross near the bottom. Others feature a single slit hole there, as if the slit (cross or single) has a functional role such as releasing heat, but I think other vessels were used to heat wine [Specifically, the Jue 爵.

I'm wondering both if it has a functional purpose and if the cross has a symbolic purpose. I even saw a cross as in inscription the inside bowl of a wine vessel. 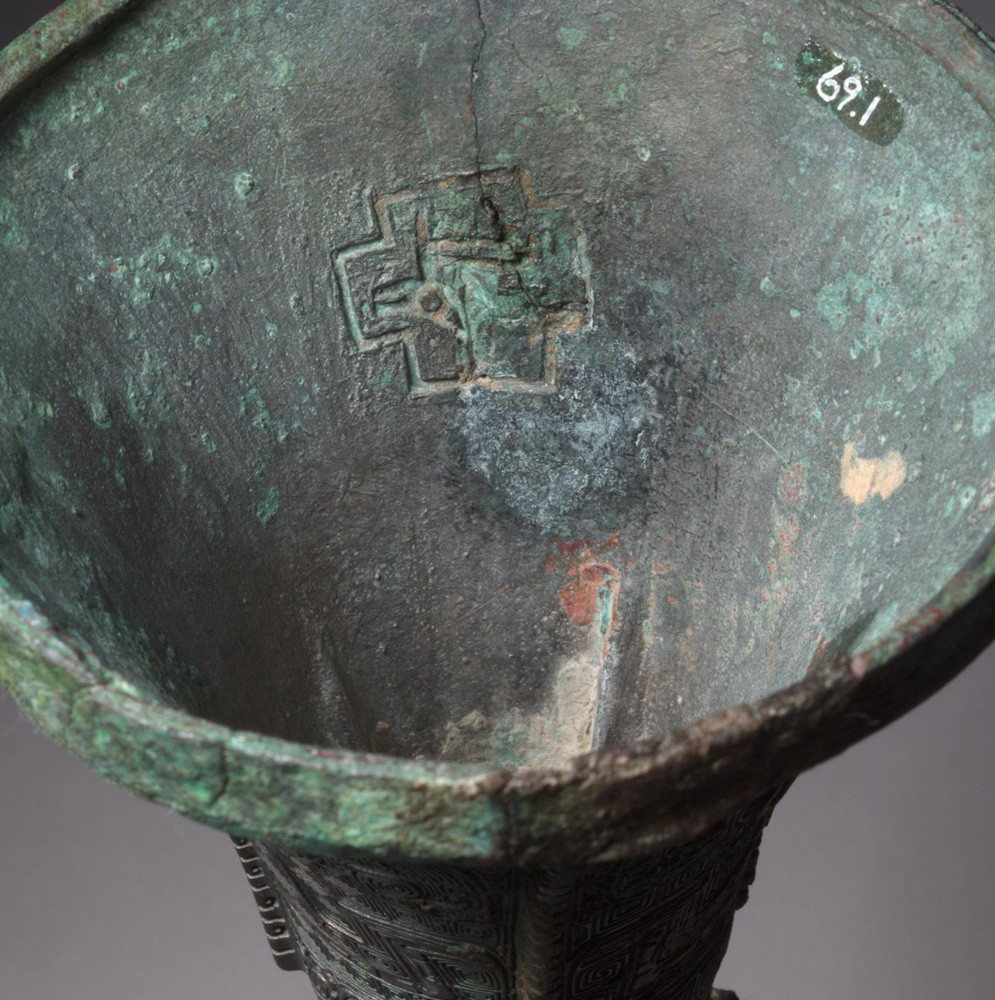 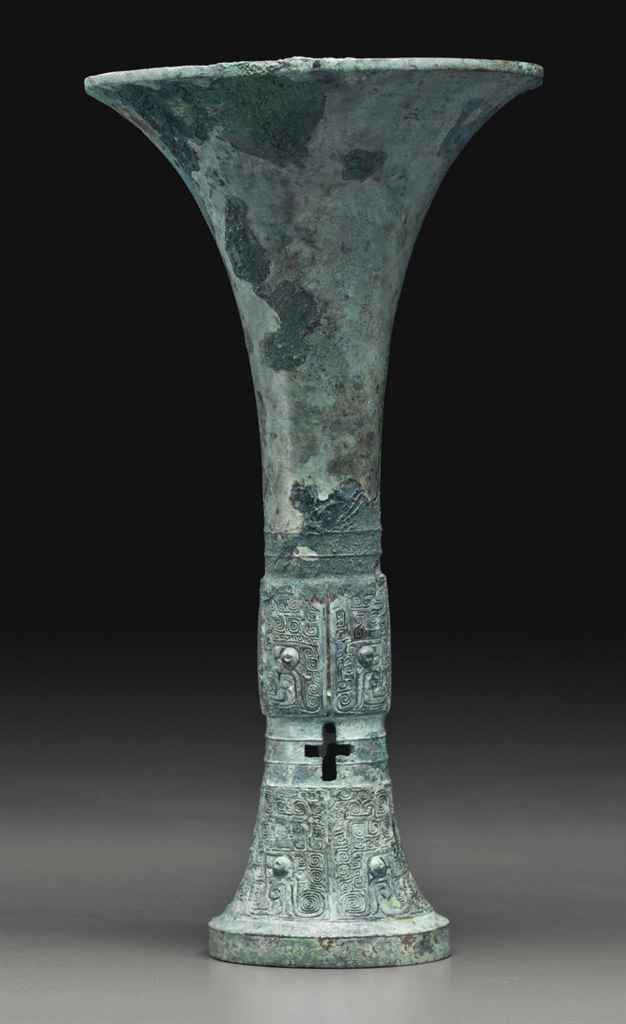 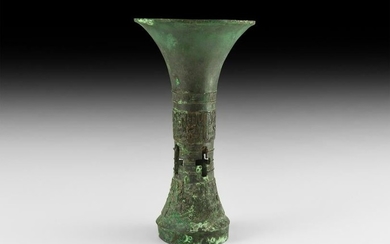 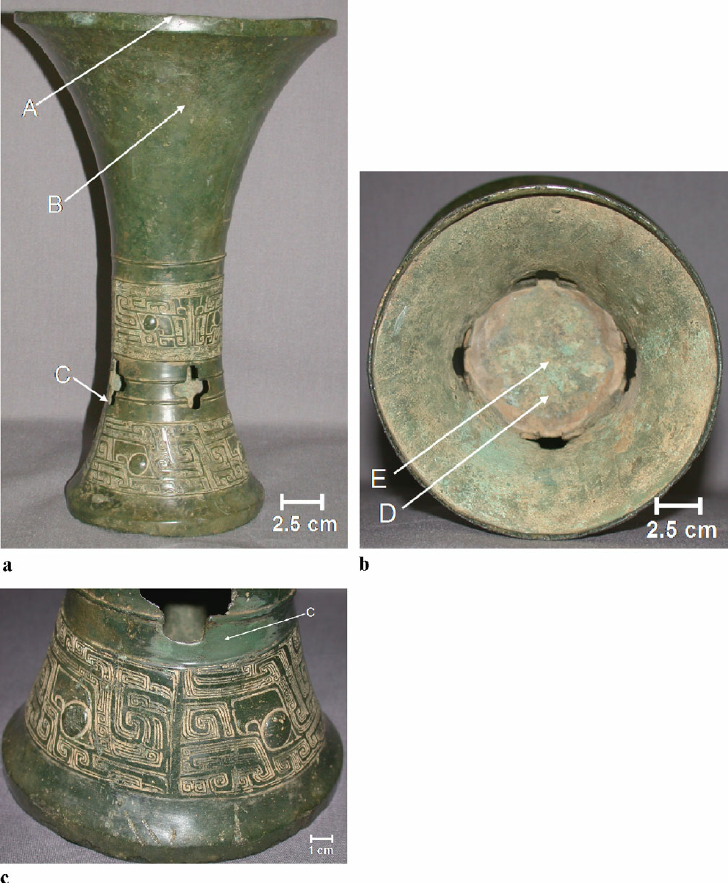 The ➕-shaped inscription in the first image is not related to the ➕-shaped holes in the other images. Also, neither of these ➕-shapes are specific to Gū chalices, being also found in other types of bronze vessels.

Although these ➕-shapes are not related to each other, they are both features mainly found in Shāng bronzes, and quickly disappeared among bronze artifacts after the dynasty's fall.

Glyph evolution and usages of 「亞」

「亞」 depicts ancient passageways and entrances to royal tombs, which were the iconic architecture of Shāng ceremonial halls.[2] The modern meaning of 「亞」, inferior/below/next (in rank), is either a rebus borrowing or an extension of the semantic field (tomb > underground > below > inferior).

From its usage in texts, 「亞」 symbolises some kind of rank or elevated status, and is the name for an ancient office position if it appears as an individual character. For example, 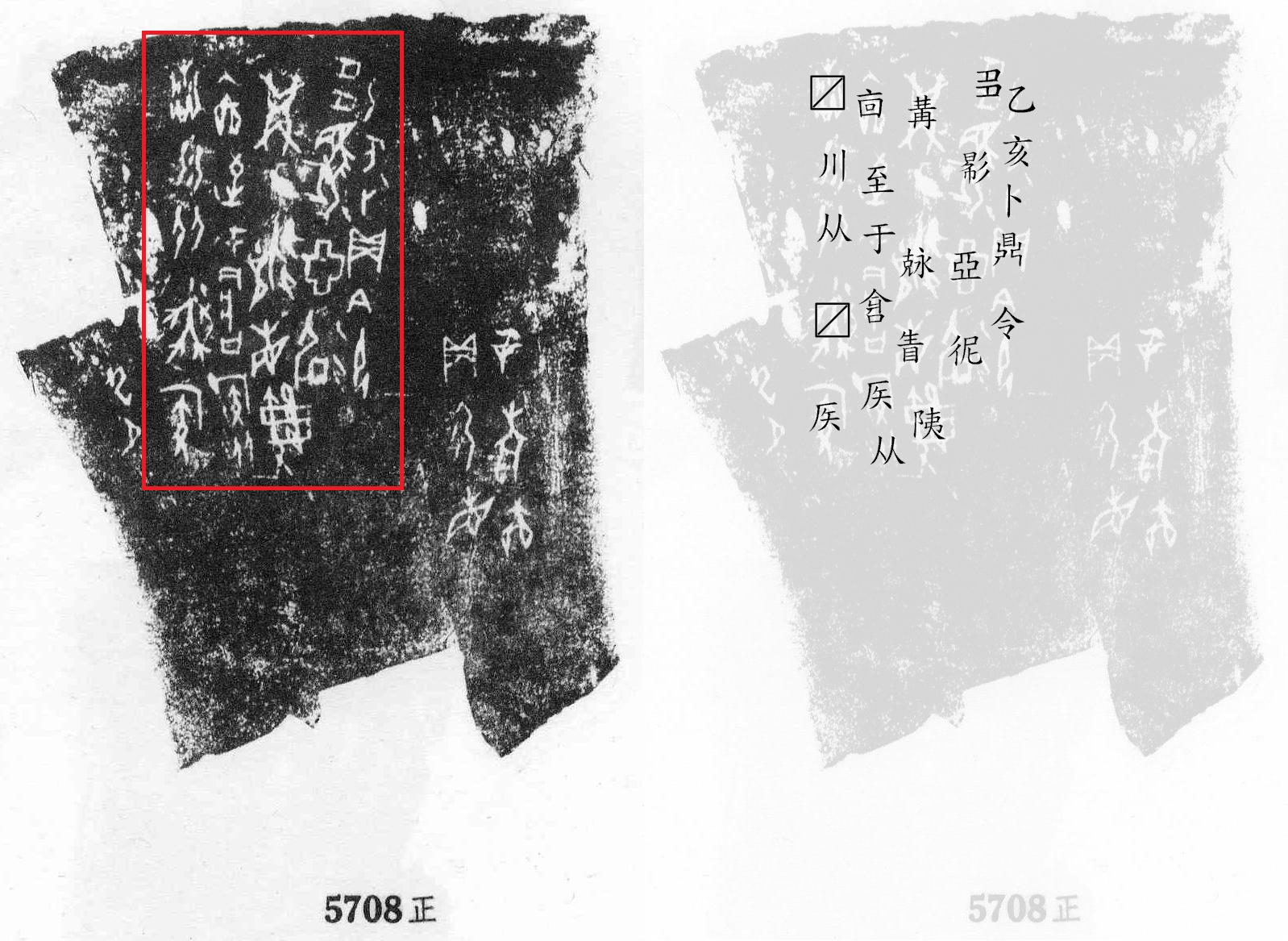 Inscription record #5708 (upper side) from 《甲骨文合集》[3]. (Left) Passage of interest boxed in red. (Right) Transcription of the passage into regular script, reproduced in text below. Parentheses indicate the interpretation of the character using modern cognates. Non-encoded characters are decomposed using ideographic description sequences. ⍁ is a placeholder for non-transcribed characters.

Divination on the day of yǐhài, it is asked: "Shall the cavalry officers 𢓚, 冓, and ⿰克永 be dispatched to patrol the 䧅 town outskirts, arriving at ⿳亼爿口侯, following ⍁1川 and ⍁2侯?"[6]
Untranslated characters should be tentatively treated as proper nouns of location/geographical names and/or people 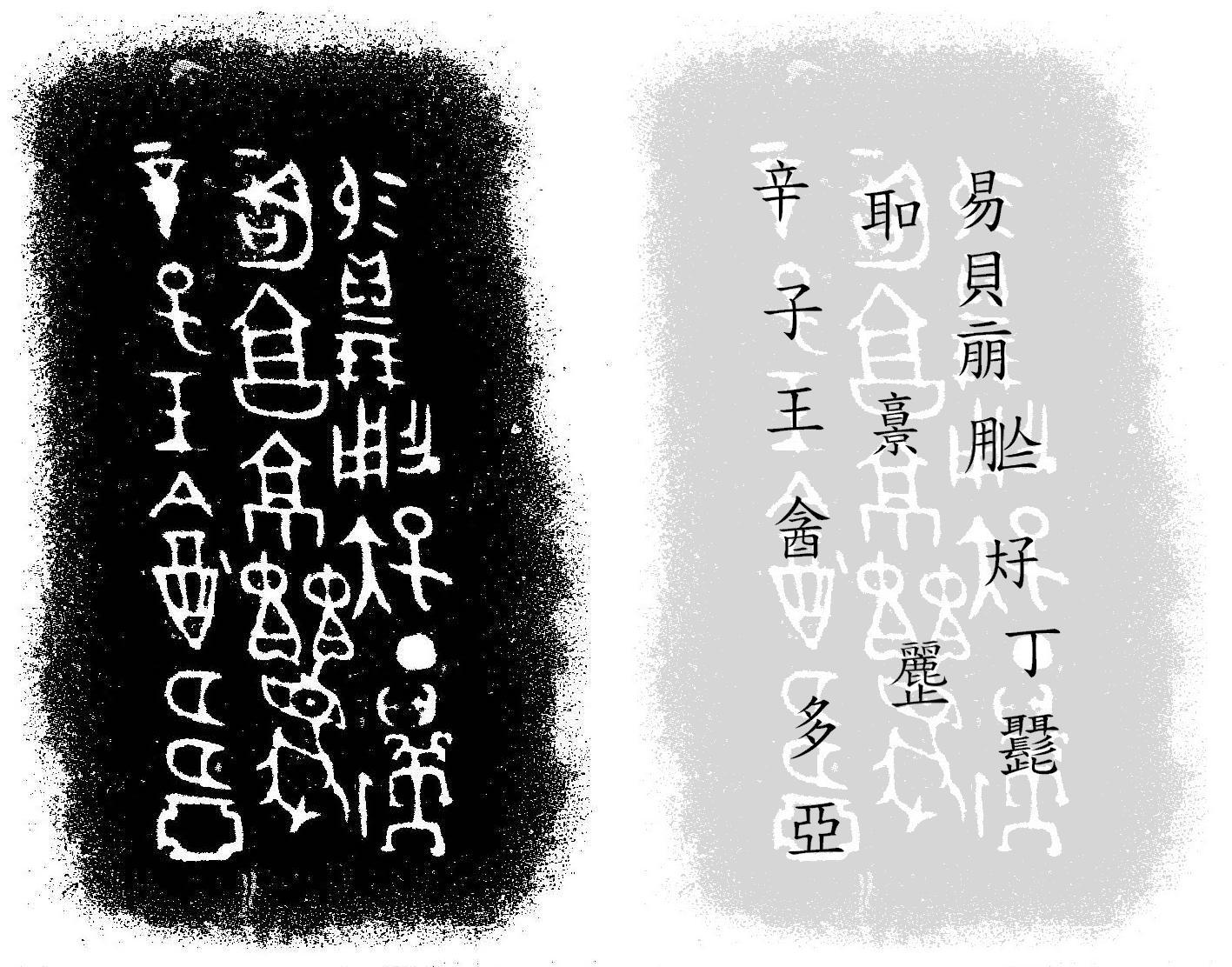 邐 guǐ vessel, inscription record #3975 from 《殷周金文集成》[7]. (Left) Image of original passage. (Right) Transcription of the passage into regular script, reproduced in the text below. The last character, 「⿱聑髭」, is a clan name or symbol.

On the day of xīnsì, the King held a wine ceremony for the court officials. 聽 joined the ceremony and took his seating, and the King bestowed him two 朋[10] of 貝, which was used to cast this 大子丁 guǐ vessel. ⿱聑髭.

The stand-alone usage of 「亞」, indicating the meaning name of an ancient office position, is also found when 「亞」 appears as a decorative border. If a clan symbol inside 「亞」 is or contains a character that depicts a profession, the clan insignia indicates that the clan may play a specific role in society. The evidence linking decorative 「亞」 borders to professions is circumstantial, however, and these insignia should be primarily interpreted as clan names or clan icons. 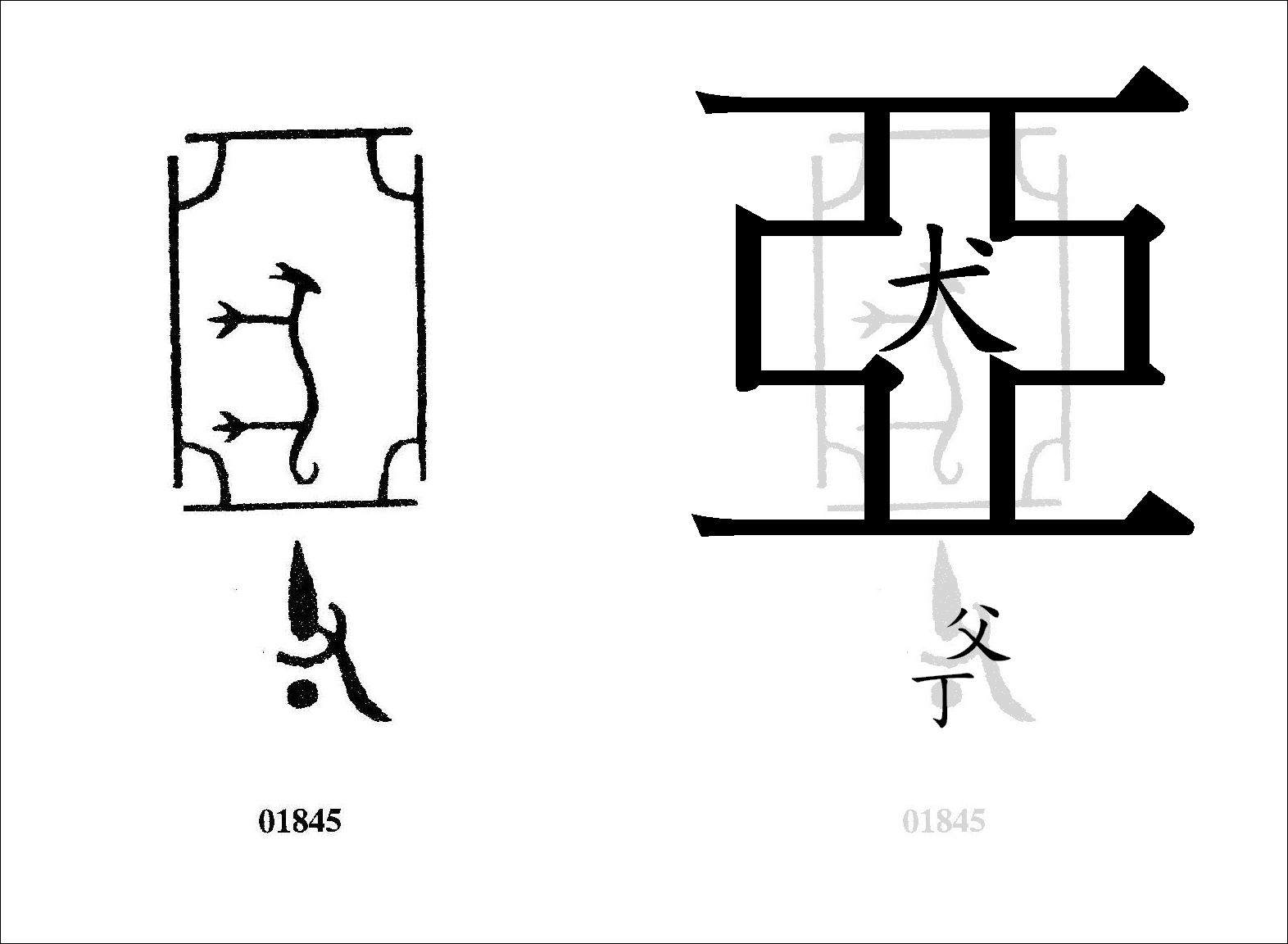 亞犬父丁 fāng dǐng vessel, inscription record #1845 from 《殷周金文集成》[7] The caster was from the ⿴亞犬 clan, and this vessel is for commemorating the caster's father (父) on the fourth day (丁) of ten days. Shāng and Zhōu timekeeping involved 10-day "weeks" named in sequence as 甲乙丙丁戊己庚辛壬癸, together called the heavenly stems. 「犬」 literally means dog. 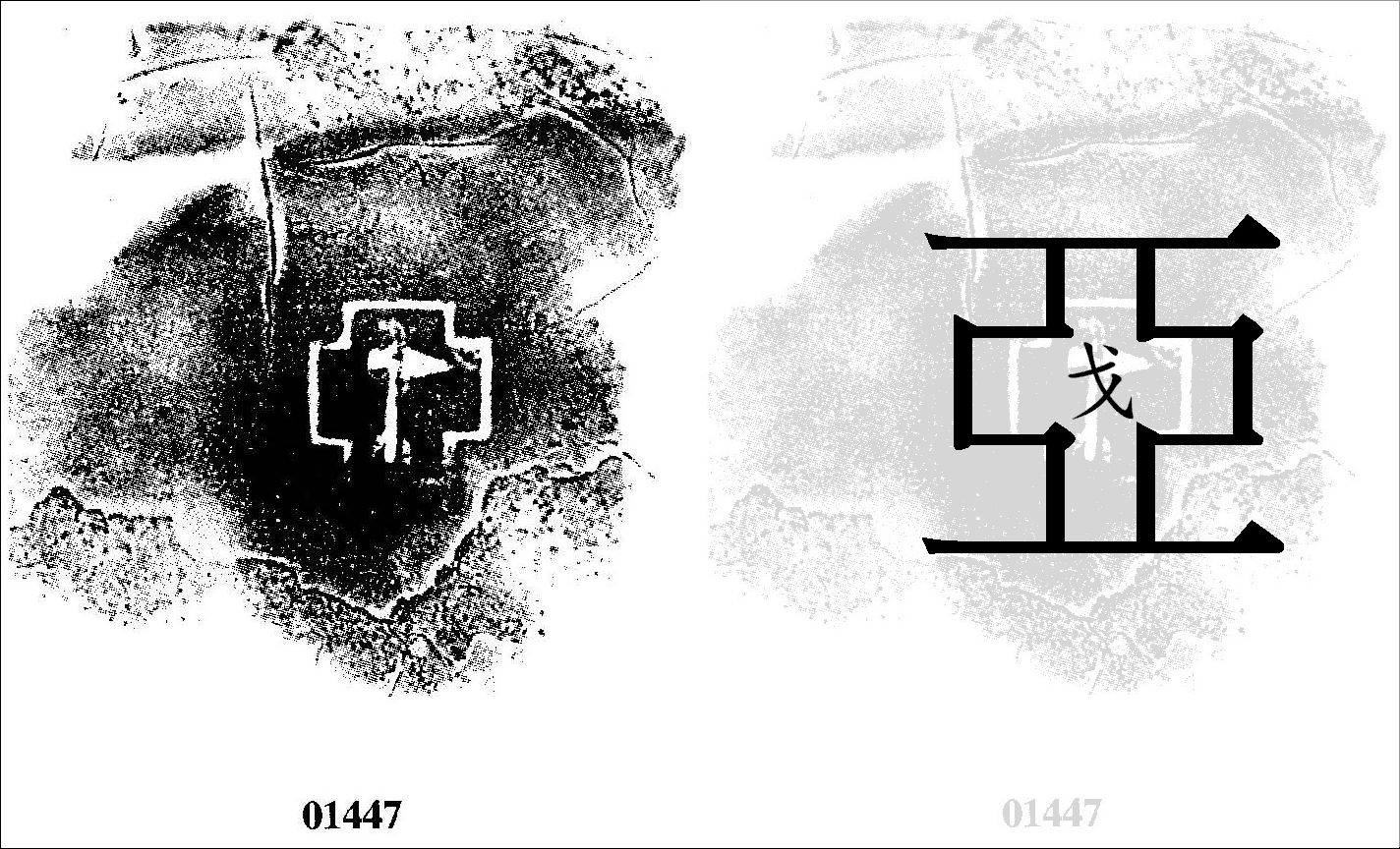 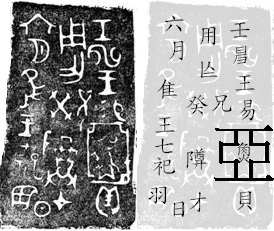 On the day of rénshēn, the king bestowed riches to ⿴亞魚 for the casting of a zūn vessel for the commemoration of Elder Brother on the tenth day. 'Tis the sixth month of the seventh year of the King's ascension to the throne, during the memorial of 翼. 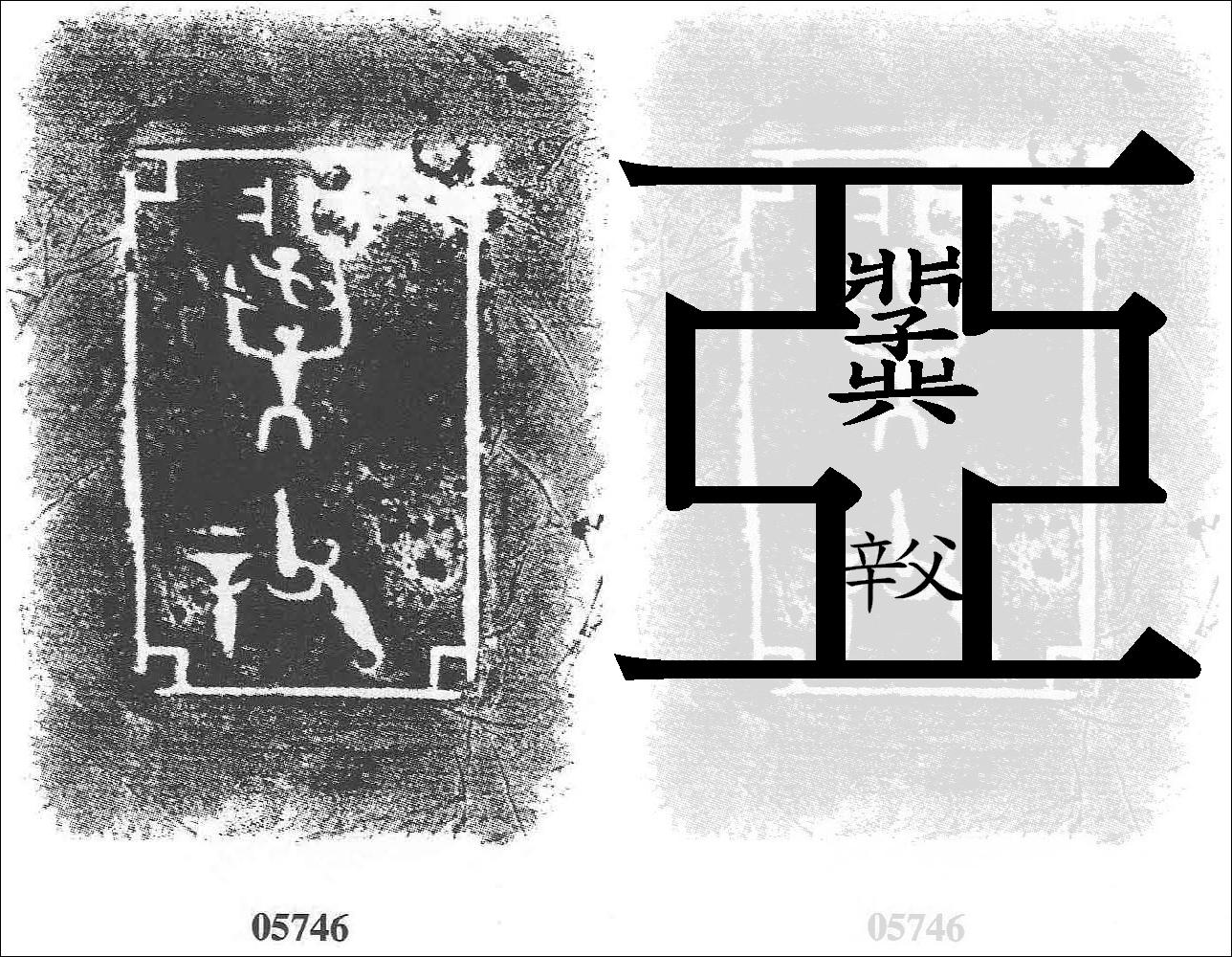 亞⿱𤕰𪦾父辛 zūn vessel, inscription record #5746 from 《殷周金文集成》[7] The clan name/symbol is ⿱𤕰𪦾, and this vessel is for commemorating the caster's father (父) on the eighth day (辛) of ten days.

The creature inside of 「亞」 in your first image, 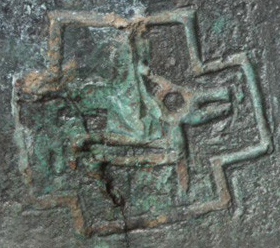 does not appear to have a consensus in its interpretation, being sometimes identified as a non-specific animal/beast 「獸」 and sometimes interpreted as horse 「馬」.[5] If the creature is a horse, then 「亞」 surrounding horse is a clan insignia which possibly specifies that the clan has something to do with cavalry corps.

Taken from the English-version abstract from the article 《圈足上的鏤孔：試論商代青銅器的泥芯撐技術》 (Perforations above the round base: A discussion of techniques involving clay cores in Shāng-era bronze vessels) by Liú Yù below:

Some square or criss-cross holes commonly seen in the ring-foot of Shang bronze vessels are thought to be caused by clay spacers made in the clay core prior to casting. Clay spacers are some ridges in the clay core, sometimes in the outer-mold, which can maintain the wall thickness, keep mold sections register and help the core fixed. The evolution of clay-spacer technique is related to the development of section-mold casting technology of bronze vessels.

Not the answer you're looking for? Browse other questions tagged ancient-china or ask your own question.

13
Did the Chinese Develop Steam Engines Prior to the 17th Century?
21
Why did Chinese use high tin bronze for swords?
8
How historical are early Chinese (Shang dynasty and earlier) dynastic records?
18
Does Chinese history really span the past 5000 years?
11
How were Chinese Dynasties named?
3
Why didn't the Chinese repeating crossbow dominate?
2
Why have eunuchs been so influential in Chinese history?
1
What type of ancient Chinese headgear is this and what more do we know about it?
13
Did ancient Chinese and/or Japanese scholars speculate about what lay across the Pacific?