Why did hobos (at least stereotypically) carry their belongings in a cloth on a stick on their shoulder?

Would not a hobo be protective about their few belongings? Why put it on a stick and carry it over your shoulder, for anyone to grab?

Why not simply walk with it in your hands, like a bag? Don't you still get the same weight/pressure? And you still need one hand to hold the stick, so it doesn't free up your hands either way.

I assume that a backpack is too modern or too expensive to work for a hobo of the kind I envision, who would likely be living somewhere in the late 19th century or early 20th century. (Also, a backpack, while freeing up both hands, is also easy to steal from.)

In a world where you don't have access to a backpack, and thus have to use one hand, the sensible thing to do would be to build some kind of machine to help you lift the load. Since you're broke, you're going to be making this machine yourself by hand with whatever is laying around, which means it needs to be a simple machine.

the last 3 don't really apply in this situation, the wheel won't work well off-road, and pulleys require a lot of parts, which leaves us with the lever:

A lever works in combination with a fulcrum to allow a large weight to be lifted using only a fraction of the force it would require to lift it by hand, at the cost of having to move your hand further to do it. All the weight itself still has to get supported by the fulcrum.

So in the case of our hobo, he can heft 100 kg of gear* with only 5 kg of force on his arm. His legs are then supporting the entire 100kg, but those the are the largest, strongest muscles in his body, already used to supporting his own weight all day.

If he was just hefting a sack without any mechanical help, that would be the entire 100kg using his arms, which is mostly something only weightlifters want to do, and then only briefly, not all day.

All that's required for this is a stick that won't break under the weight, and a scrap of cloth big and strong enough to hold everything.

* - 100 KG is probably too heavy by half, but that's the weight used in the graphic I found, so I'm sticking to it to avoid confusion

Note that this is not limited to homeless people, but to anybody hiking without modern backpacking equipment that's available since a few decades. We partly hiked like this back in the 70s, and surely people did in the 19th century, if they weren't marching infantry of sorts who need free hands for their business.

The part why it is easier to carry a weight on a stick over the shoulder (realistic values would be between 5 and 20kg, 30 are already a veritable military marching pack) has already been answered. Note that the support point at the shoulder should be lined with a cloth or so to avoid rubbing, especially for us modern guys who don't have muscles there, compared to a marching Roman legion with their furcas :-)

Apart from modern day city life, robbing is not so much a thing when hiking out there. The bundle is usually fastened with a knot, to avoid sliding and thus sudden change in center of mass. Thus the arm rests effortlessly as a counterweight, you'd feel it if somebody grabs the bundle. When in civilized areas, the purse should be close to the body ofc.

Hiking for hours with a bag in hand is strenous, it tears the arm, cuts the fingers, needs constant balance and muscle tension in the shouder to avoid banging against the legs. It is not an option to carry 10kg in a dangling bag over longer distances than a few km. Also the bag at the side is less protected from damage compared to being carried over the shoulder.

One arm is occupied balancing the stick, that is true. But that's an effortless thing and the arms aren't needed anyway when hiking. One watches one's feet. The total mass (body + bundle) doesn't change either, but the dynamics of balancing are simply easier with the weight stabilized high on the body (valid for the stick as well as a backback) than with it dangling at the side.

tl, dr: When modern equipment isn't available, carrying a weight over the shoulder is the natural and most energy efficient way.

The term "hobo" is possibly a reference to "hoe boy," per author Todd de Pastino*. These were what we would now call "migrant workers," who made their living travelling with hoes on their shoulders, seeking work from local farms. The opening of the country by railroads around the time of the Civil War helped make this a viable way of life.

Given that these men needed to carry hoes, anyway, attaching their goods to the end of these hoes made sense. The hoe was a "lever," which could lessen the burden of the weight being carried on it. See Archimedes Law. It was also less clumsy than carrying goods with two hands.

There was only a small (but greater than zero) danger of their goods being stolen because these were just their personal effects, typically of the poorest quality. Because they were "poor," (and seen as such), they were the "last" people anyone would want to steal from.

*Note: Todd de Pastion is a prize winning, multiple published author with a PhD from an Ivy League University.

Stereotype is probably an important point here (see alternatives below). The majority of images I found when googling for hobo photos were recent (and most were related to "comedy" or the like).

This article/photo collection about early 20th century hobos shows a wide variety of packs/bundles - including 1(!) bindle on a stick.

While I don't have much knowledge about real American hobo traditions, there are several alternatives that also don't require much invention nor expensive gear.

When is it convenient to carry your bundle on a stick?

This pack fits the bill: 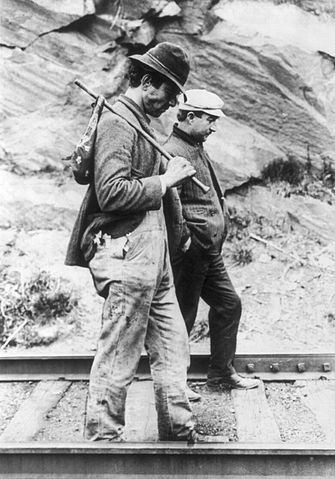 (source)
You can also see that there isn't that much to steal.

Alternatives used in other parts of the world.

Tying one's belongings into a sheet of cloth is also a traditional technique of (Central) European journeymen. Here are some recent images: 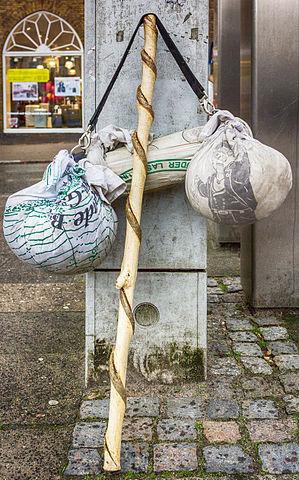 This pack is likely outside the convenient weight range for carrying on the stick (there are also tools in the pack): it is used with shoulder bag and the stick is used as hiking stick.

German language Wikipedia about the Charlottenburger (the cloth to wrap the pack) claims that the tradition to have a bundle in a sheet of cloth arouse because Charlottenburg banned the usual packs (similar to messenger bags, or army rucksacks) as a measure of infection/parasite control.

I'd expect to find Central European images of a bundle carried on a stick rather in the context of a pleasure day-hike or the like (maybe Wandervogel?).

Similar technique in Australia for their variety of wandering (agricultural) laborer: 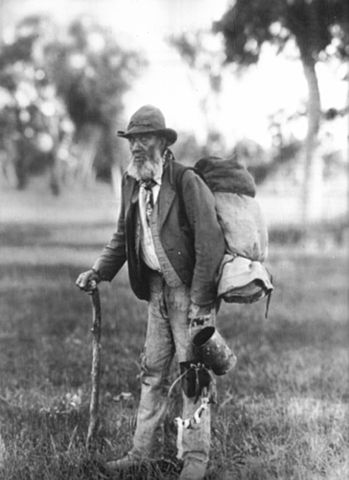 Last but not least, if the loads become yet larger and heavier, pack frames and basket constructions have been used for thousands of years, and also here poor mans versions were likely home made from wood that was collected in the surroundings. Possibly even with the shoulder straps plaited from willow (likely: if one couldn't afford a leather strap): 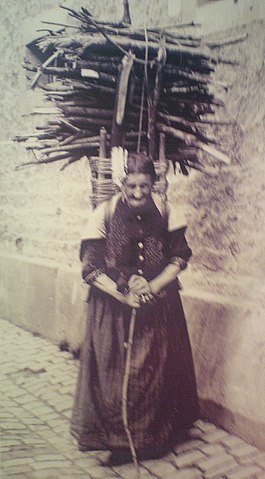 It's simply a comfortable and cheap way of carrying heavy loads over long distances.

Whilst I haven't seen any hobos doing this today, I have seen people doing something similar in Bangladesh. They use a bamboo pole over their shoulder with the goods hanging off ropes at either end. This means that they can carry heavier loads as they balance each other. Moreover, as a bamboo pole is elastic to a certain degree, it means that they walk with a gait matched to the rhythm of the goods swinging at either end and so preserving energy as they walk.

So it's unlikely to be 'stereotypical' but based upon actual practise, especially when woodlands and rural life were more common in Europe than they are now.

Not the answer you're looking for? Browse other questions tagged everyday-life or ask your own question.

20
When would one carry a sword on a shoulder with grip upwards?