What were the criteria for class ranking at West Point prior to the Civil War?

I was watching Grant on The History Channel last night, and it was mentioned that Robert E. Lee graduated second in his class, while Grant was in the middle*. They also made a point of pointing out how Grant came from humble circumstances (his father was a tanner), while of course many if not most West Pointers were from prominent families. Lee of course came from one of the First Families of Virginia.

This reminded me of something. I've read (somewhere - memory fails) that until relatively recently, Yale took family into account when determining class ranking. If that were a factor at West Point back then, a middling ranking for a tanner's son might actually be considered rather impressive. Likewise coming in second when your family is very prominent might not be a huge accomplishment.

So what exactly were the criteria for class rankings at West Point during the era Grant and Lee attended? Is there any record of that?

* - Note that they were not in the same class, which this factoid often mistakenly implies.

united-states military 19th-century
share | improve this question | |
edited May 28 at 7:16

N.B. The line General Merit is the total of the preceding lines (thus in modern terminology the overall Cadet Performance Score).

Beginning June 1 the visitors and the academic board met jointly every day for a fortnight. It was a ceremonious test. In the examination room, at the head of one table, sat Colonel Thayer in full uniform, with the professors around the board. At the other table were General Van Cortlandt and the visitors. In front of this awesome group, three large blackboards were placed on easels. Six cadets were called in at a time, two for each board. While one demonstrated orally, the others prepared their problems. In this setting, Robert made his appearance when his name was called, and for five separate grillings of an hour each he explained what he knew of engineering, of strategy, and of the other subjects of the year's work.

It appears to be 85% academic and 15% character/conduct, similar to the modern CPS calculation: 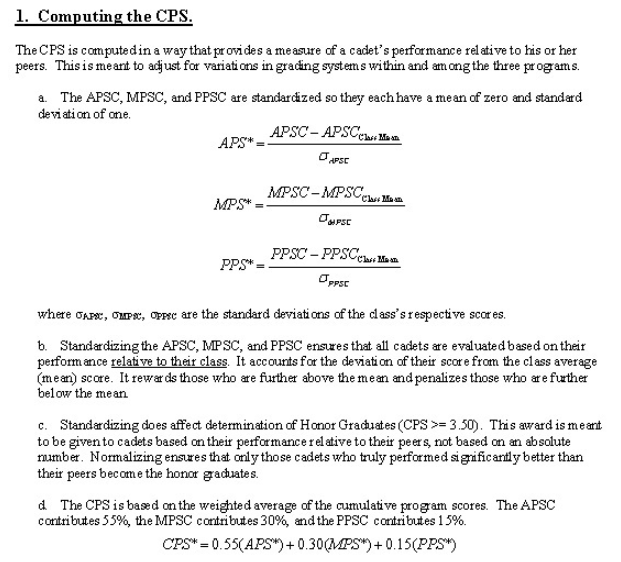 The Wikipedia page for Charles Mason, the cadet who surpassed Lee that year and became a prominent Iowa judge, claims Mason outscored Lee by just 29 points out of 2000, at a total of 1995.5.

Freeman's phrasing below suggests a strong negative correlation (at least) between number of accumulated demerits and the Conduct score.

... and gave him equal place in Conduct with Barnes, Burbank, Harford, Kennedy, and Mason, who had received no demerits during the whole of their four years at the academy.

That over 10% of the graduating class survived 4 years with no demerits indicates a challenging, but by no means insurmountable, hurdle for a determined cadet.

According to the book Duty, Honor, Country: A History of West Point By Stephen E. Ambrose, the ranking system at West Point was established early on, c. 1819. Following a proposal by the War Department:

[Sylvanus Thayer] so constructed the merit roll that it eliminated practically all subjective feelings, while it took into account nearly everything a cadet did for four years, both in and out of the classroom.

There is no mention of anything about a cadet's prior background influencing this ranking system. While I can't say for certain that family background had no direct impact on ranking, the above makes me tend to doubt it. (As an aside, this system apparently had wider influence in the business world.)

Not the answer you're looking for? Browse other questions tagged united-states military 19th-century or ask your own question.