Why do some 17th and 18th century maps depict Ottoman sanjaks north of the Danube in Wallachia?

Note: I am editing this question constantly, because after posting it I have realized that there are more maps involving the same description, beside Homann's of 1720. (That doesn't mean that they are common or "normal". The large majority of the maps from the same period are very different.)

Wallachia was a principality (despotate) that became independent from Hungary in 1330, was mostly nominally (or otherwise rebellious) vassal of the Ottoman in the 15th (Vlad the Impaler) and 16th centuries, mostly obedient vassal of the same Ottoman in the 17th century, tax-farm province governed by Greeks from Istanbul in the 18th century, de facto Russian dominion not long after the fall of Napoleon and before the Crimean war, and de facto independent after that.

Although part of Ottoman Europe, it was exclusively governed by Christian princes (voivodes, despots) appointed or confirmed by the Ottoman sultan. Their territories were not integrated into direct Ottoman administration as eyalets (pasheliks). Only their Danube ports north of the Danube (Braila, Giurgiu, Turnu) were occupied and administered directly as kaza, probably with some additional farm land around them, like seen in this 1785 map: 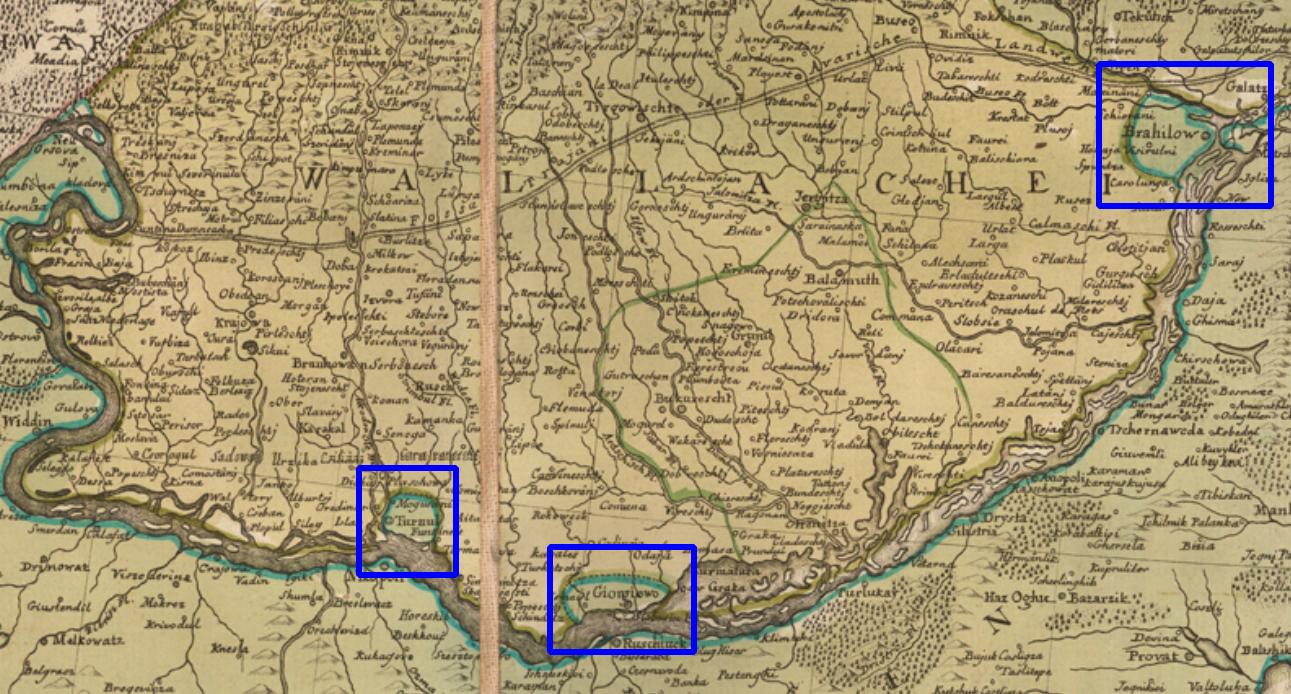 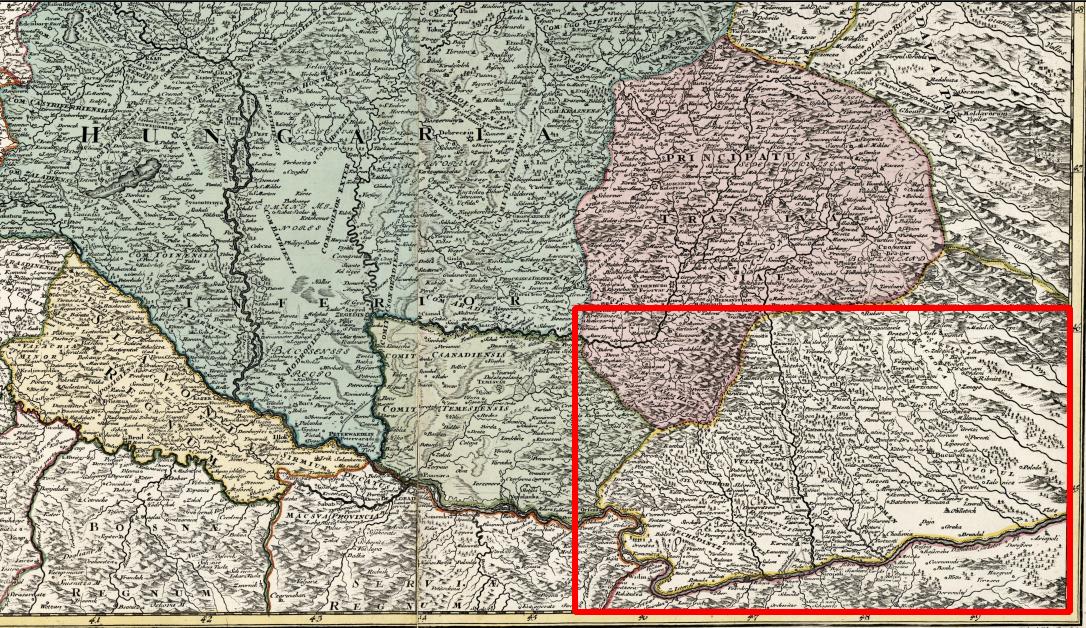 The Wallachian/Ottoman frontier was on the Danube all the time, or so I thought before seeing some maps from the 17th and 18th centuries, like that made by Johann Baptist Homann of 1720: 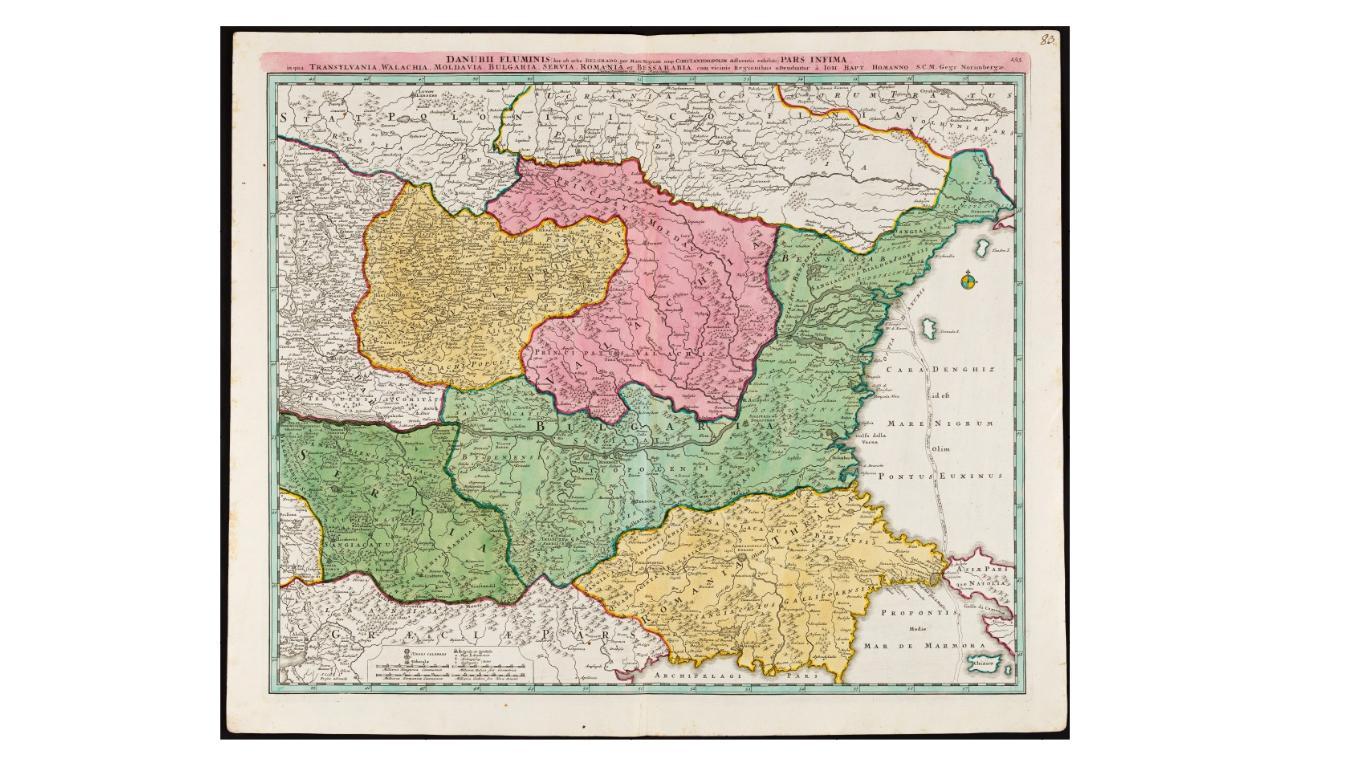 It can be found HERE. 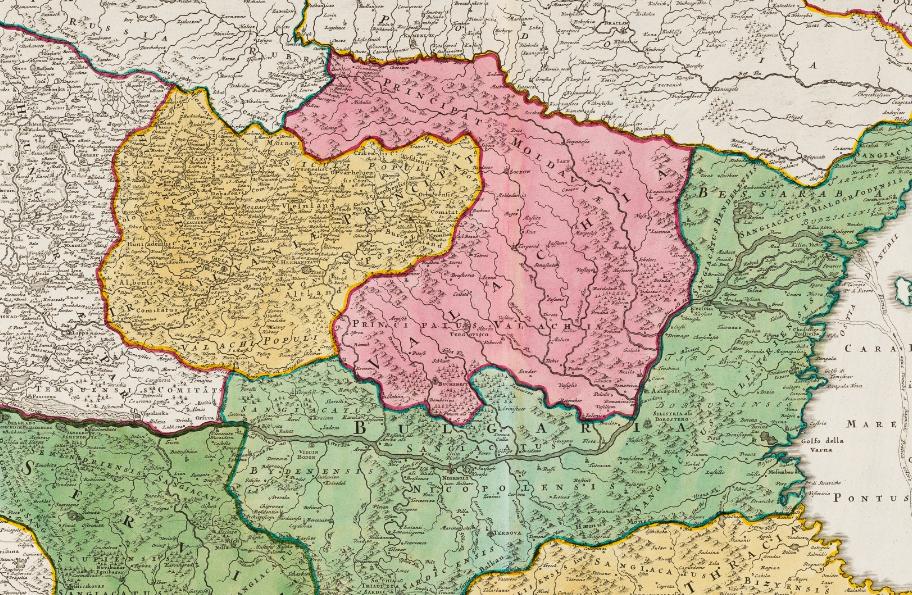 It includes two Ottoman sanjaks: Sanjak of Nicopolis (Sangiacatus Nicopolensis) and Sanjak of Vidin (Sangiacatus Bydenensis), but they are represented as encompassing large parts of Wallachia, north of the Danube.

Underlining main cities and names that I can recognize:

This is very surprising. Not just because the principalities of Wallachia and Moldavia are presented within one larger country also called "Wallachia" (the ethnic-linguistic identity of the two was known and sometimes confusing), or because Bulgaria is marked on both parts of the Danube (that would be explicable by the extension of the two sanjaks), but also because according to the Treaty of Passarowitz, the Western part of Wallachia (Oltenia) was in fact occupied by Austria until 1737/9, a fact represented in a map of 1705-1714 by the same Homann: 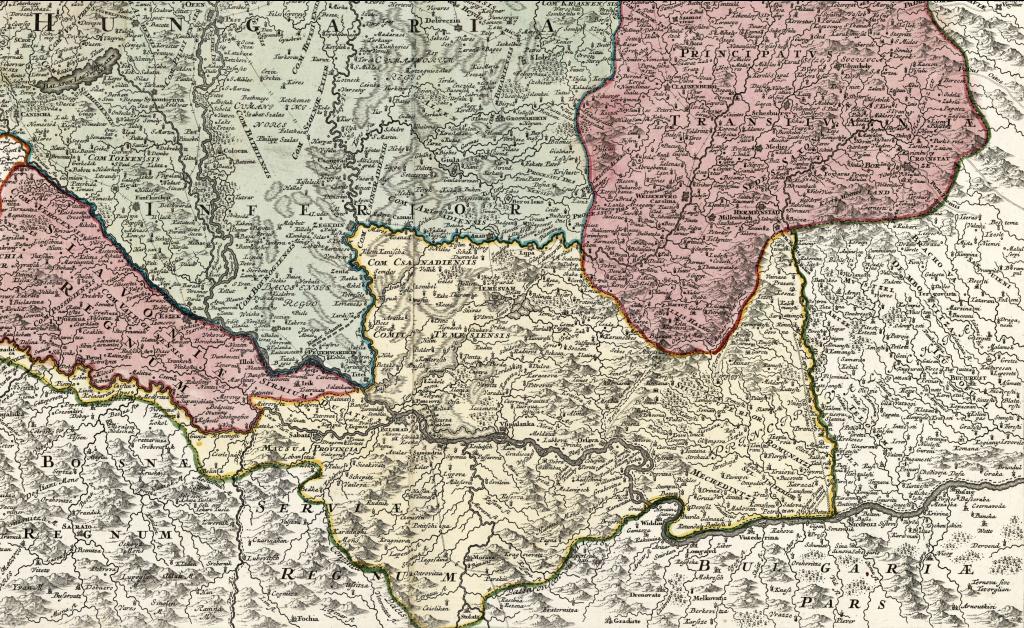 Austrian occupation appears also on this map(Des neu eröffnenden Kriegs Theatri in Ungarn zweiter thei, Felsecker, Adam Jonathan Nürnberg 1737) or on this one (Iustissimæ Causæ Heroica Virtute - Seutter, Matthäus Augsburg 1718-1735?), while on this 1735 map Oltenia has the honor of being renamed "Walachia Caesarea".

Maps like that are very surprising to me because I am not aware of any event that involved at any time in history such a large extension of Ottoman direct administration north of the Danube. On most maps Wallachia (and Moldavia) would appear as part of the Ottoman empire or as separate entity, but normally NOT split in this way. — Also, it doesn't make much sense: once the Ottoman border pushed up north of the Danube, there is no point in it stopping arbitrarily before the Carpathian mountains, that is before the Transylvanian southern border.

What we see on that map is a fully Ottoman Oltenia, the Ottoman frontier mounting north of the Danube between present Orsova (Orsava on the map) and Turnu Severin (Severin on the map), up north to the Transylvanian frontier, then following south on the Olt (Alutus) river (which is the eastern margin of Oltenia) until coming close to Slatina, where it goes to the East (out of Oltenia) very close to the capital Bucharest. In this way all cities of Oltenia are included in the Sanjak of Vidin, Craiova (Kraiova), Targu-Jiu (Tergojy), Caracal (Karakaol). The frontier comes very close the capital Bucharest, then follows Ialomita river (Ialonicza on the map) to the Danube. In this way Wallachia only touches the Danube on half of the South-North axe, close to Dobruja (an unheard-of situation).

On the modern map that frontier would be approximately this: 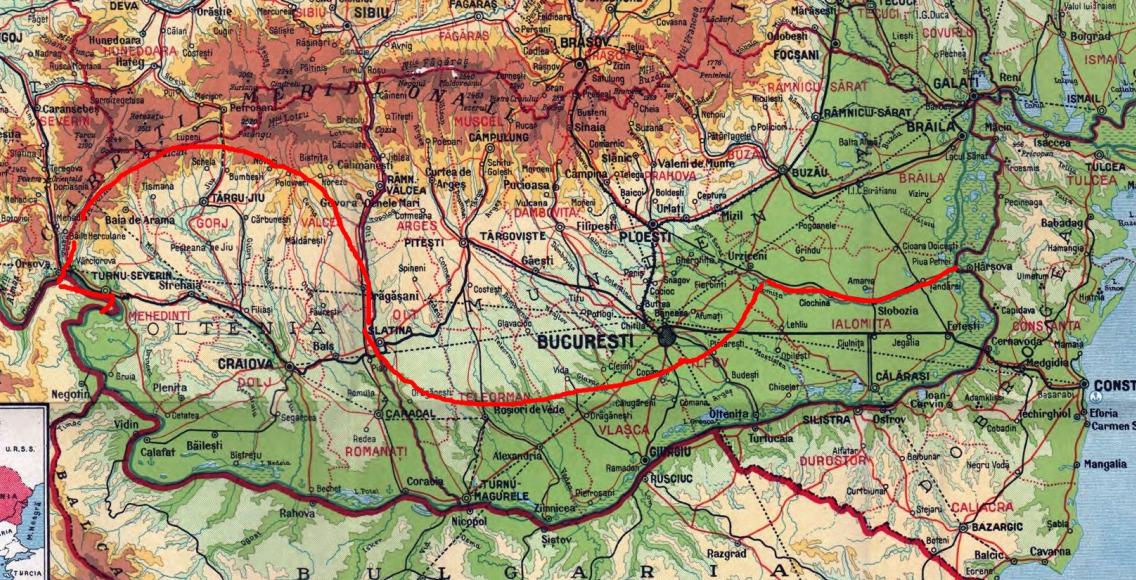 The maps of this part of Europe became more accurate as the imperial court in Vienna came closer and became more interested in it in the 18th century, and this map seems accurate enough, although it has some clear but small errors: the Turkish port (kaza) of Braila appears twice, once (incorrectly) as part of Wallachia as Braila, and once as Brailon in Ottoman land; Giurgiu also seem to appear twice (both as Ottoman): as Giorgo (close to Romanian name) and as Giurgevo (close to the Bulgarian name).

I have found other maps with the same structure: 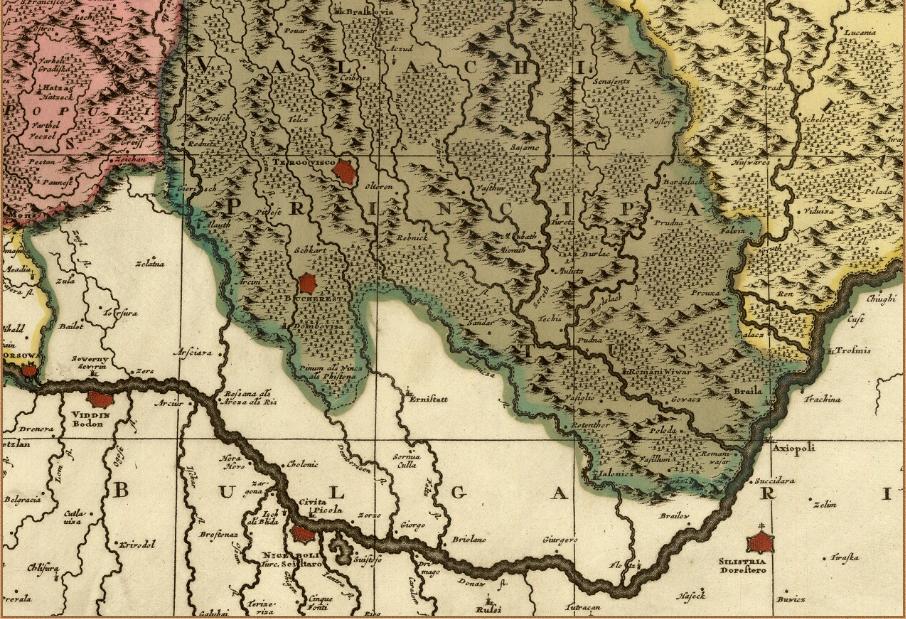 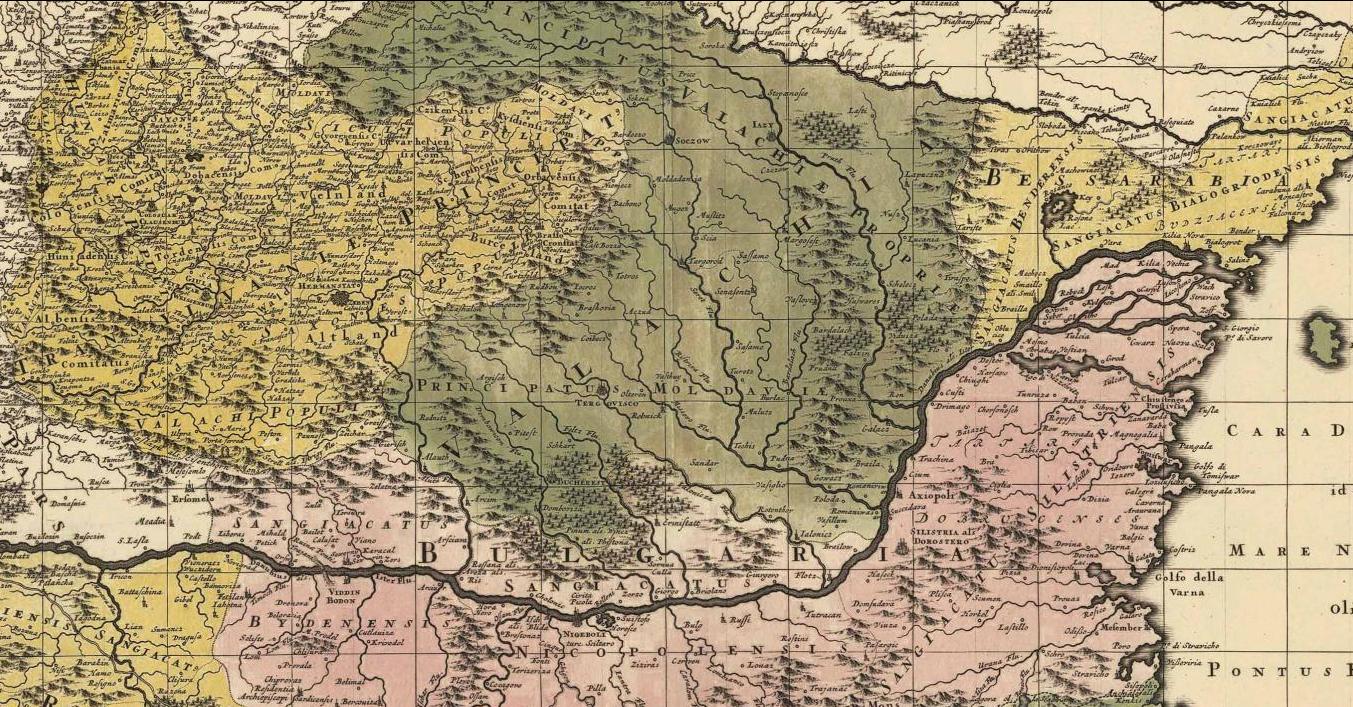 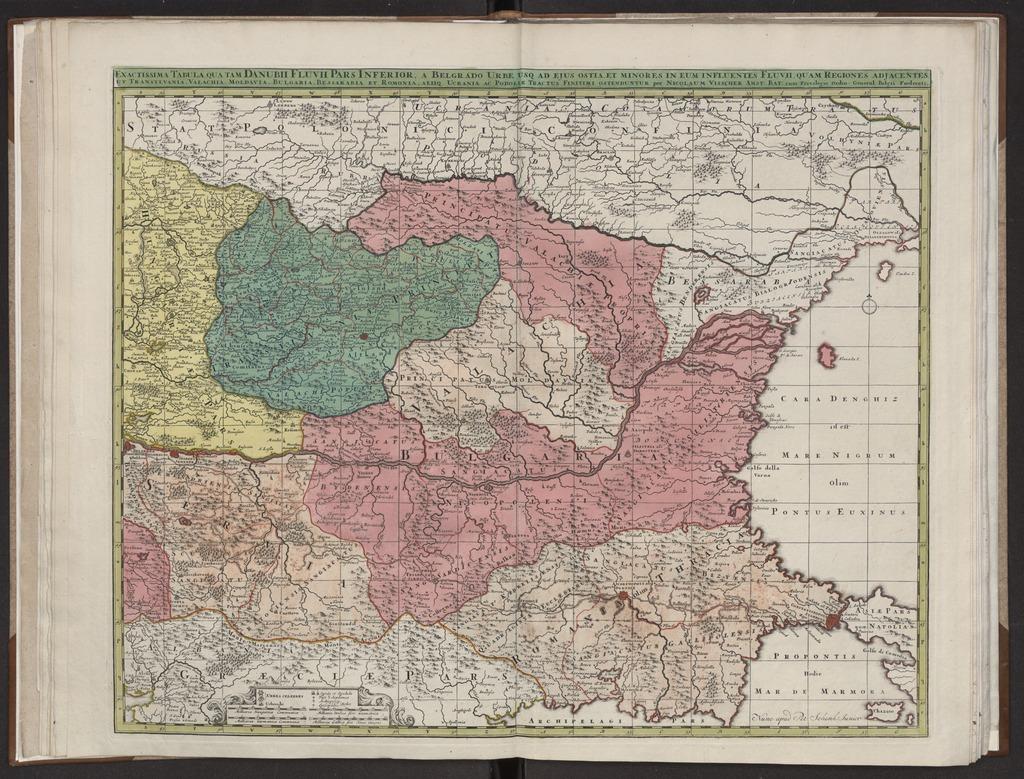 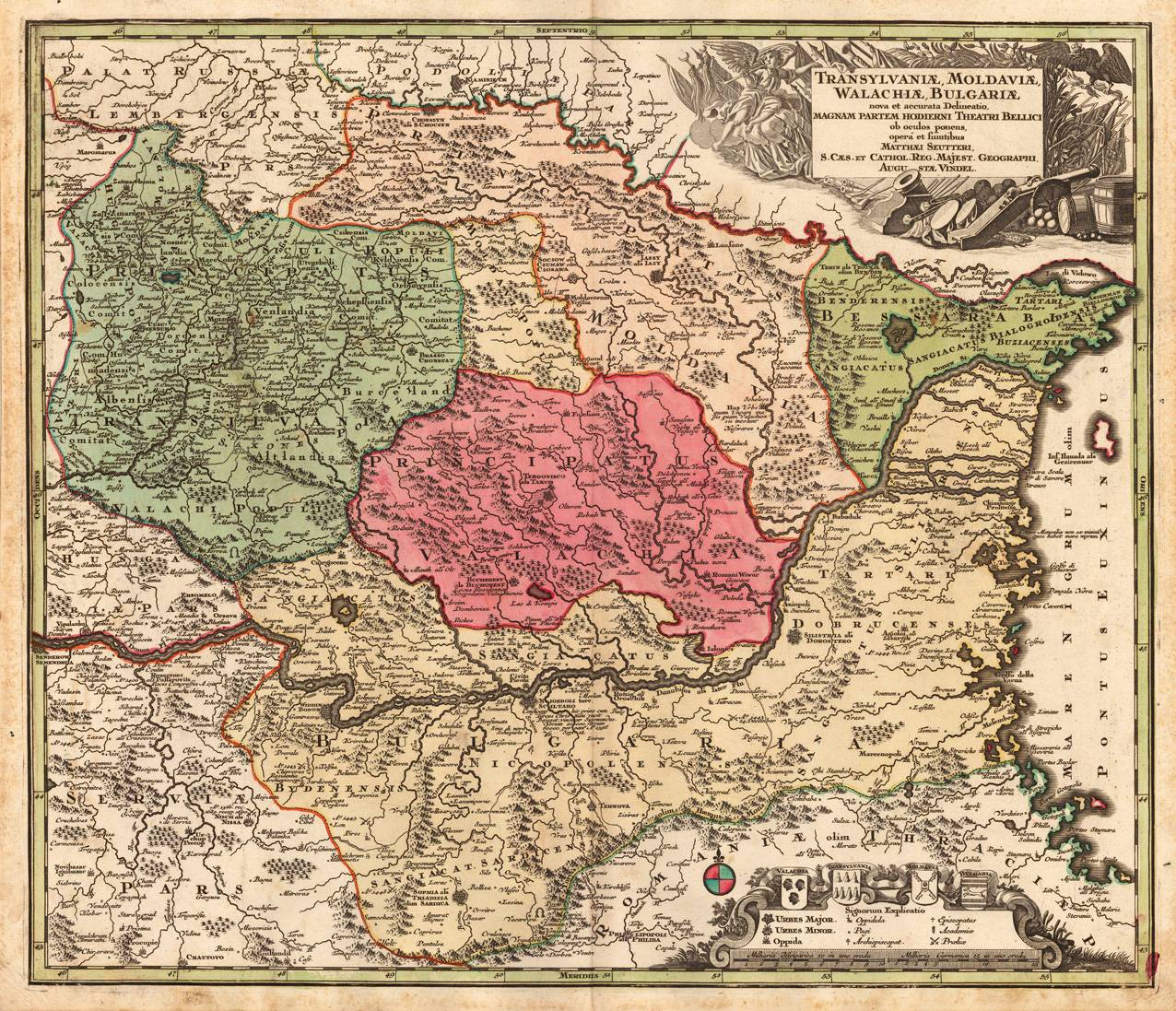 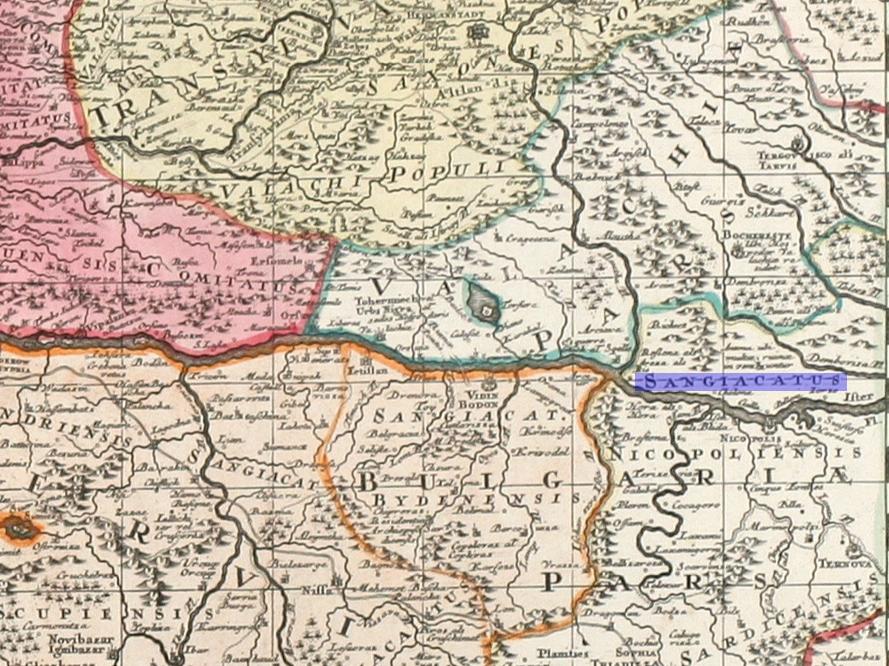 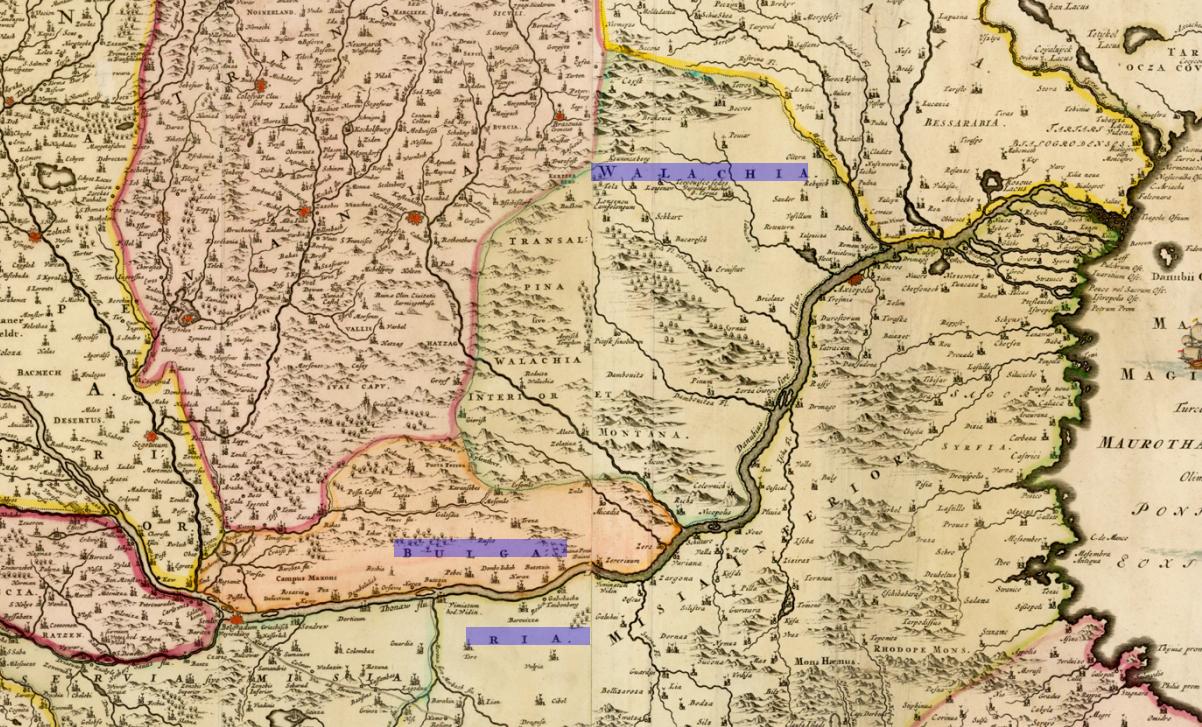 On some of these maps, including Homanns's, the Ottoman sanjaks are not only extending up north of the Danube, but also encircling the area of the capital Bucharest from three parts!...

This 1650-70 map of Hungary might be closer to the source of this oddity. To south-east of Hungary it vaguely represents Transylvania, Wallachia and Bulgaria (as "pars": like Transylvanian regions, Wallachian regions etc) without clear borders between them, while "Bulgaria" is set on both banks of the Danube 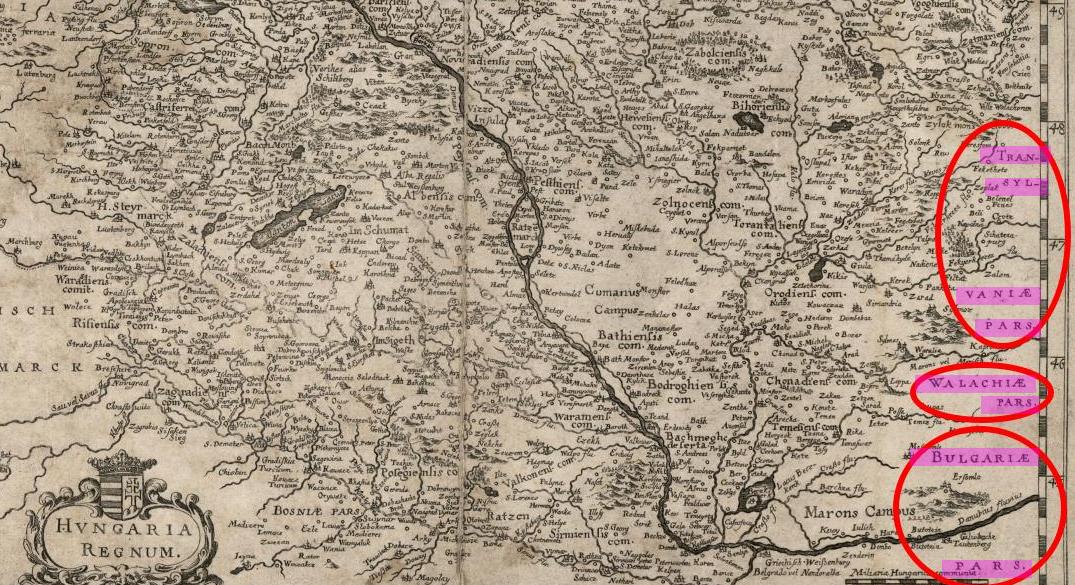 The 1720 map does not reflect the 1718 situation (Passarowitz treaty), nor a later one, but most probably an older representation, which probably is based on inaccurate maps from the second half of the 17th century. That pattern appears already in the 17th century (1685? 1651?). On the other hand, the maps are more detailed and look more "scientific" than previous ones...

Or are such maps simply wrong?

I am thinking for a long time to provide an answer with more details on the history of East European cartography, but am lacking the necessary time.

The answer would lead to the conclusion that those maps are simply wrong, because copying old maps which were imprecise and erroneous even when better ones were available. In fact other contemporary maps are clearly NOT showing those "Ottoman sanjaks north of the Danube" (see first maps in the question).

The odd precision of the wrong maps comes from applying precision as a method to an insufficient sum of knowledge extracted from old and imprecise maps.

Thus, people arrived from this 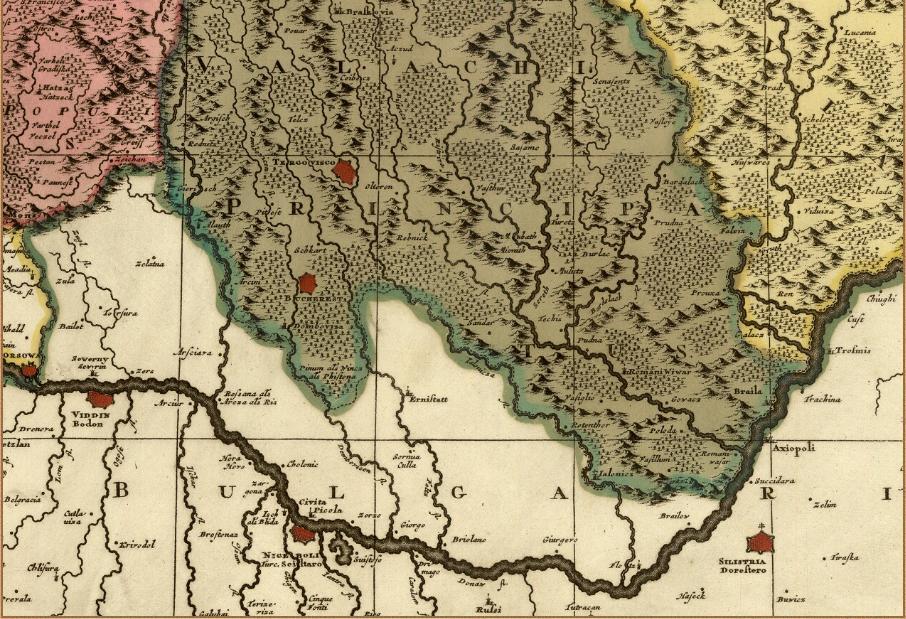 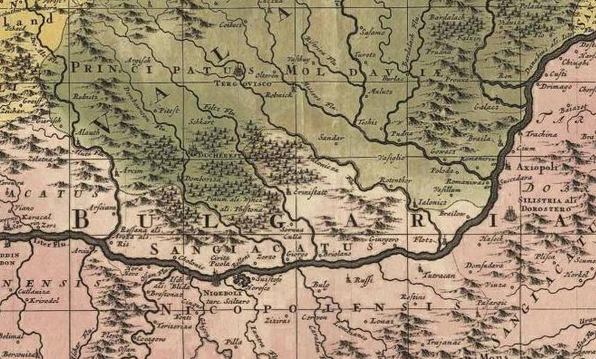 and then to this, which gives a false impression of fidelity:

But its increased fidelity is just in the drawing and printing, not in the information.

I think it is a "point of view", a wish of Ottomans. I think it was a important trade across the Danube. On this map you can see "Vestigia Pontis lignei antiqua", on "Via lapidea Imperator Trajan". This is the Sucidava-Gigen Bridge or Dolni-Vadin-Grojibodu bridge. Far more strange on many of this maps the southest mouth of the Danube is at : Constanta=Proslavita until 1800.

Not the answer you're looking for? Browse other questions tagged ottoman-empire maps romania border bulgaria or ask your own question.

12
State boundaries in mountainous regions
6
When would the Japanese have been able to recognize their archipelago?
1
What are the height units of contours on this WW2 topographic map?
13
Why did Ottoman Army use camels in the Siege of Vienna 1683?
7
How were ethnographic maps in the 19th century made?
7
Was Transylvania autonomous within Hungary before 1526?
8
Why were there "Tributary States" to the Ottoman Empire?
22
Is today's Old City of Jerusalem the Jerusalem of the Crusades' period?
9
How to build historical maps?