What was the meaning of Samnite swastika?

I was recently reading about the Samnite Wars and since I wanted to have better image of how soldiers on both sides during the period looked I googled images of Roman and Samnite warriors and one of the first images that popped out was this: 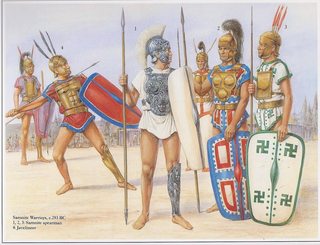 "...a reconstruction of the dress which might have been worn by the Samnite army at the Battle of Aquilonia in 293." Also, "F2, together with various figures in the background, represents the balance of the Samnite army, dressed in their 'parti-coloured' tunics. ... Bands of decorated material were applied at the shoulder, sleeves, hem, chest, etc., as in these examples, which are based on paintings of warriors from Paestan tombs and Lucanian vases. The decorative colours and motifs have been repeated on the shields." Sekunda, 'Early Roman Armies'

What really stands out to me are the swastikas on the shield. I am aware that swastika is a historic symbol and that version of it were found on various artifacts but I never associated it with Italian peninsula. Since the picture above is an artist representation of what Samnites looked like my first question is:

Are there some records of it being used on shields or is the above representation ahistorical?

I tried to search for some more pictures of Samnite shields but this was the only one I could find that has this patter which makes me think that maybe this is just an artist representation. The source of the image also does not have any explanation of the symbol or reference to some other source.

If the swastika was actually used what was its meaning if it is even known?

I know that swastika is a religious symbol in some Eastern religions, did it have the same meaning in ancient Italy? I tried to find answer on my own and I found some sources that associate the symbol with happiness when it comes to Romans, but I was not able to find any source discussing the symbol for Samnites.

ancient-history weapons
Share
Improve this question
edited May 30 '20 at 10:18

Browse other questions tagged ancient-history weapons or ask your own question.

18
What was “Greek fire”?
6
What was involved in “grounding arms?”
3
What was the original cost of a Sharps Rifle?
3
Babylonian handbags - meaning?
9
What is the earliest evidence for the use of hearing aids?
6
How long ago was the yo-yo first used as a weapon?
6
What is the meaning of the quadruple symbols combination on a possibly Roman monumental piece?