This photo is believed to be from 1860-1880 Poland/Lithuania, as the house behind them looks like a Polish thatch house. The man in question is in the center back of the photo.

Uniform is single breast metal buttoned with matching trousers. Soft shoulder tabs. Small round lapels with marking or insignia. Boots and a round cap are present. The round cap has a double dot and narrow round peak.

The photo was found in collection of family photos. It has a border on the top and bottom. No marking on the back. The size is approximately 3 x 5. I will edit the post with a better picture. The only person I can identify is the young boy, whose name is Piotr Kananowicz. He was married and had 3 sons. The oldest being born in 1882 and the youngest in 1889. I have no further information on Piotr. His oldest son Alexander claimed he was from Soboleik. Other documents he just said Poland or Russia

Within the frame given, without a Polish state in existence, there are basically two main possibilities for the army the individual would have served in: Russian Imperial Army, or Prussian army. The individual pictures might be just a visiting friend or family member… Also take note that there seems to be no place called "Soboleik", but three places called Sobolew, two in under Russian control at the time, one of them in Silesia, in Prussia.

For both armies the head gear seems to provide the main distinction. But also the cut of the uniform, the buttons, especially the three on the sleeves, the collar and shoulder boards do not look Russian.

For the headgear, a Russian 'sailor cap' (also in use for cavalry, or the 1st Finnish regiment:

) seems out of the question, as most infantry caps by that time were peaked, with visor, and the cap badge would be a single oval one.

Unlike in Prussia, where we would see as standard the Krätzchen, a brimless cap with two circular cockades (visors at first optional for private purchase, much later no longer allowed for conscripts).

Russian shoulder boards are usually much wider than Prussian ones. The regimental number of "66" might indicate a 3. Magdeburgische origin, although that number would usually appear not on the collar, but on the shoulder board.

Variations of such uniforms (slightly later, from the start of World War I): 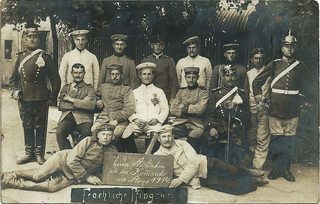 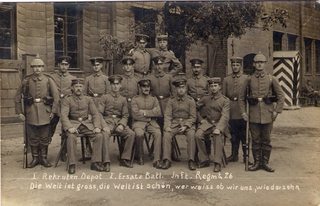 In his left hand the soldier holds a quite big bowled pipe.

(click pictures to enlarge)
That pipe seems to be of a full beant Tyrolean style (similar to cavalier) of Gesteckpfeife.

While the actual ethnic/cultural self-identification of that soldier is of course indeterminable from the picture alone, it really could go into all directions:

Bismarck's attitude towards the Poles was essentially feudal. To him the Poles were simply non-German-speaking Prussians. He held the Polish villagers in respect, primarily because of their splendid qualities as soldiers in the Prussian army, particularly in the Franco-Prussian War of 1870. To Bismarck, the "Polish problem" was essentially a problem generated by a few "meddlesome priests" and disgruntled gentry. If only a few radical clergy could be muzzled, the problem would go away. In many respects Bismarck's attitudes toward the Poles were benign compared to those of some German "liberals."
— Thomas A. Michalski: "The Prussian Crucible: Some Items in the Cultural Baggage of Prussian Polish Immmigrants", Polish American Studies, Vol. 42, No. 2 (Autumn, 1985), pp5–17.

A note on dating:

Q This photo is believed to be from 1860-1880 Poland/Lithuania, […] The only person I can identify is the young boy, whose name is Piotr Kananowicz. He was married and had 3 sons. The oldest being born in 1882 and the youngest in 1889…

This may be not the case. The boy pictured 'in 1880' can hardly have fathered offspring in "1882". Interestingly, if it is 'his', the young boy's cap reminds me of a Russian-style visor hat, while his shirt looks like a striped coastal fisherman's shirt.

There is a slow evolution in tunic cuts and construction.
But in this case, if it is a Prussian one: The soldier's hat with double coackade was introduced in 1891 and tunic looks very much like a M1907/1910 model, on the base of: fold down collar, no apparent hip seam and the added slanted pockets: the previous 1895 model would be of a distinctly blue colour (while a black and white photo, that darkish blue seems to be incompatible with what we do see here), no pockets and stand-up collar and a sewn front with a seam where the belt should go. Uniforms before 1895 tended to be even more colourful and elaborate. While feldgrau uniforms were produced en mass 'for war' before, they were only introduced 'for peace' in 1910. Off-duty feldgrau was not be worn until 1914. This transition was only completed for all troops in 1915.

A comprehensive overview of all uniform types of that era may be too big, but to get a feel for comparin Russian and Prussian uniforms of roughly that time against the picture in question and the hints or evidence of this answer:

Just to confirm he is the 1907 feldgrau uniform of the imperial German army and with the Feldmutze but for his branch it is the Landsturm which consisted of men considered too old or unfit for military service therefore they acted as Home guard or guarding prisoners of war behind the battlefields. They had metal collar devices to identify the unit. The photo is from before 1915 so the Arabic Numerals indicated the infantry brigade they belonged to which is the 66th infantry Brigade which is part of the Landwehr Metz inspection.

A photo of a Landsturm man with the the metal collar devices Courtesy of Colonel J,s 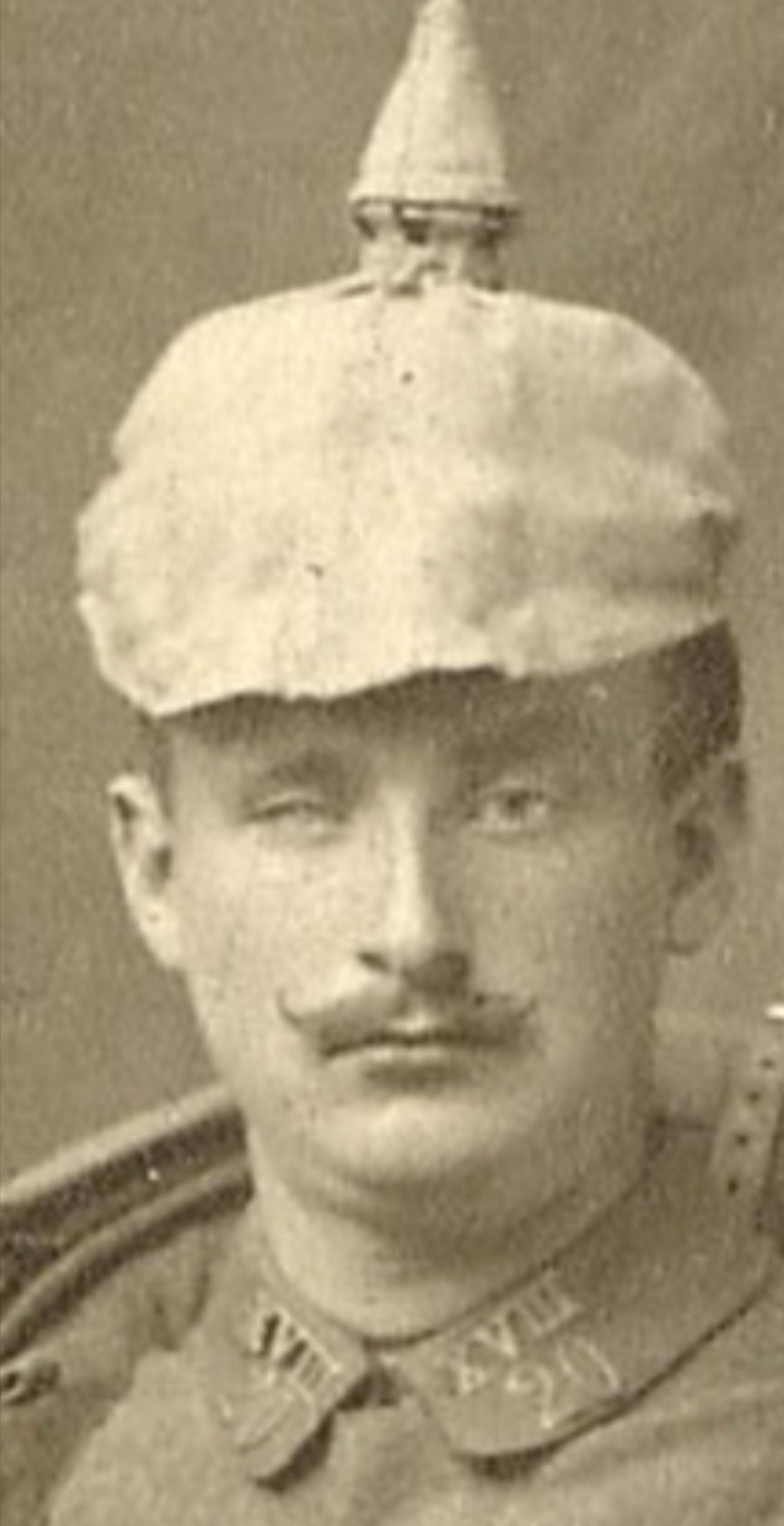 A photo of the 1907 feldgrau tunic for a Landsturm Sergeant. The German army in the first world War- Jurgen Kraus 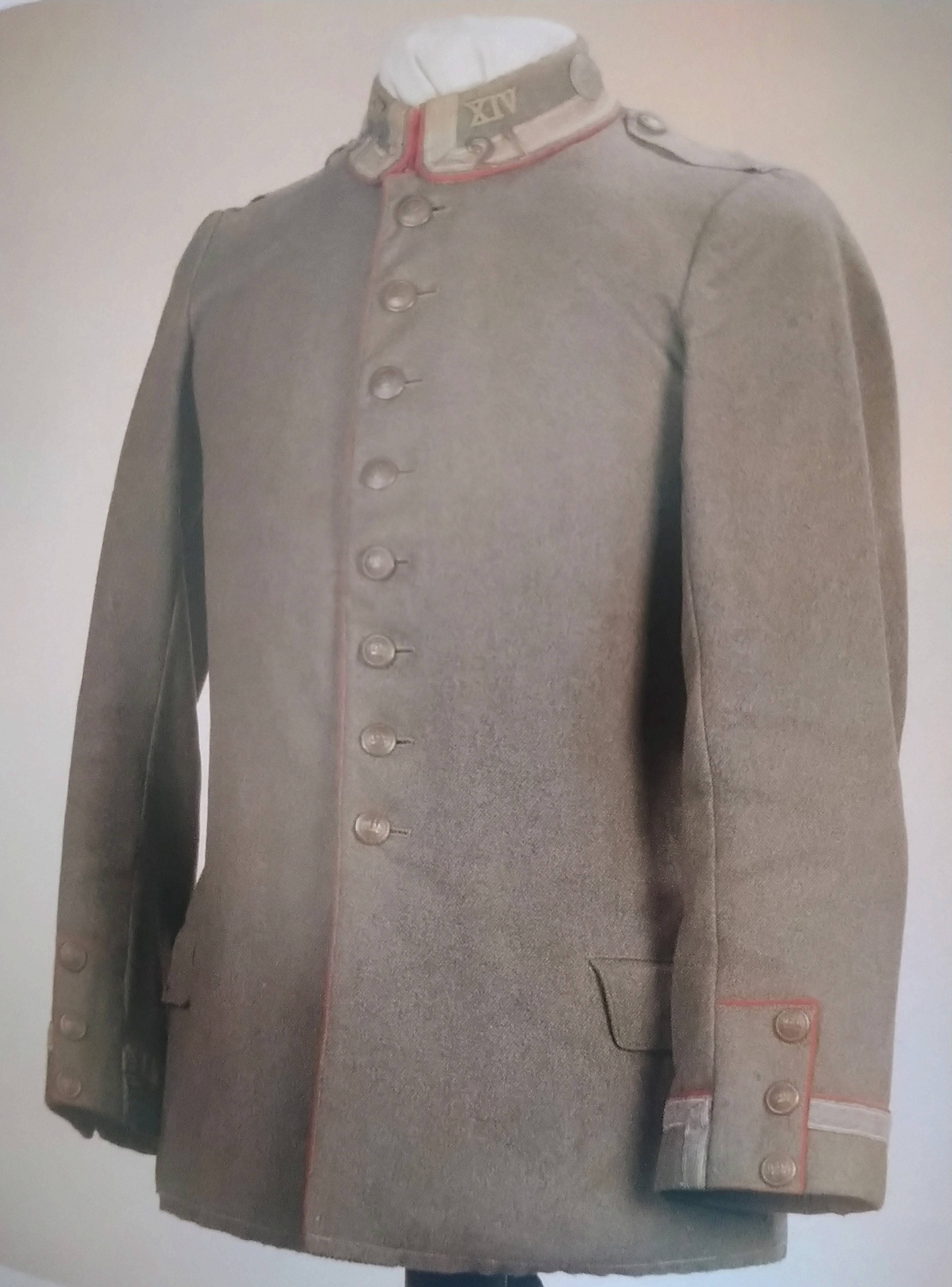 Not the answer you're looking for? Browse other questions tagged military russia identification uniform poland or ask your own question.

3
Can anybody identify the cap-badge and/or uniform in this image?