How did the world react to Trotsky's assassination?

Exiled former Russian leader Leon Trotsky was murdered in Mexico in August 1940 (with an ice pick) by a Soviet agent in the interest of Trotsky's old rival for power, the then Soviet dictator Stalin. What impression did this make on World opinion and did it harm the image of the Soviet Union?

I would guess that Trotsky's assassination was somewhat overshadowed by news of World War II in Europe, as France had recently fallen and the World was waiting to see if Britain would suffer the same fate. Even so, it must have been seen as significant.

Despite the 'distraction' of World War II, Trotsky's assassination was widely reported and commented on, but the 'interest' did not last except among Trotskyists. Stalin's Soviet Union responded to Trotsky's death by condemning him with a lengthy list of his supposed crimes, and official communist parties around the world toed the line.

Elsewhere there appears to have been little in the way of official (government-level) reaction other than the US's denial of a visa for Trotsky's corpse: Trotsky was no friend of capitalist countries and large parts of Europe were already under German occupation, their exiled governments more concerned with their own plight than that of an exiled revolutionary.

Even before Trotsky's death had been confirmed, the attack on him was on the front page of the New York Times on Wednesday the 21st of August, and the story was then picked up by American radio stations later the same day, announcing his death. Opinions were divided:

As columnists wrote up their reflections on his extraordinary life, journalists from nearly every country around the globe hurried to Mexico City to report on the murder and its consequences. Opinions inevitably conflicted. Yet few of his detractors, at least those outside the Comintern parties, denied that a star of great magnitude in contemporary affairs had been extinguished. 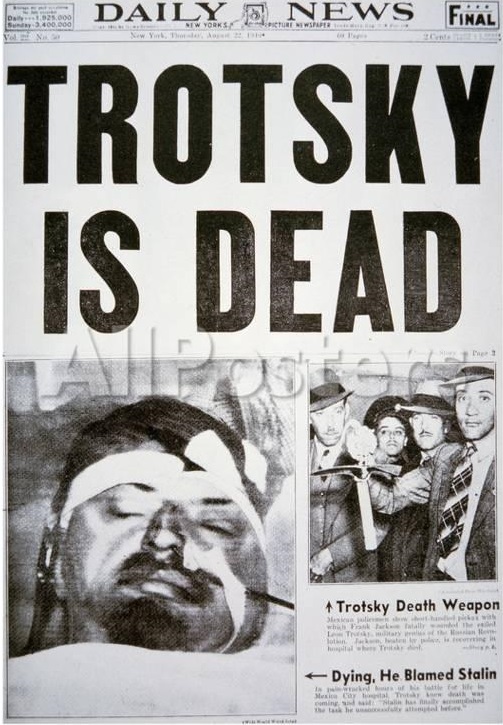 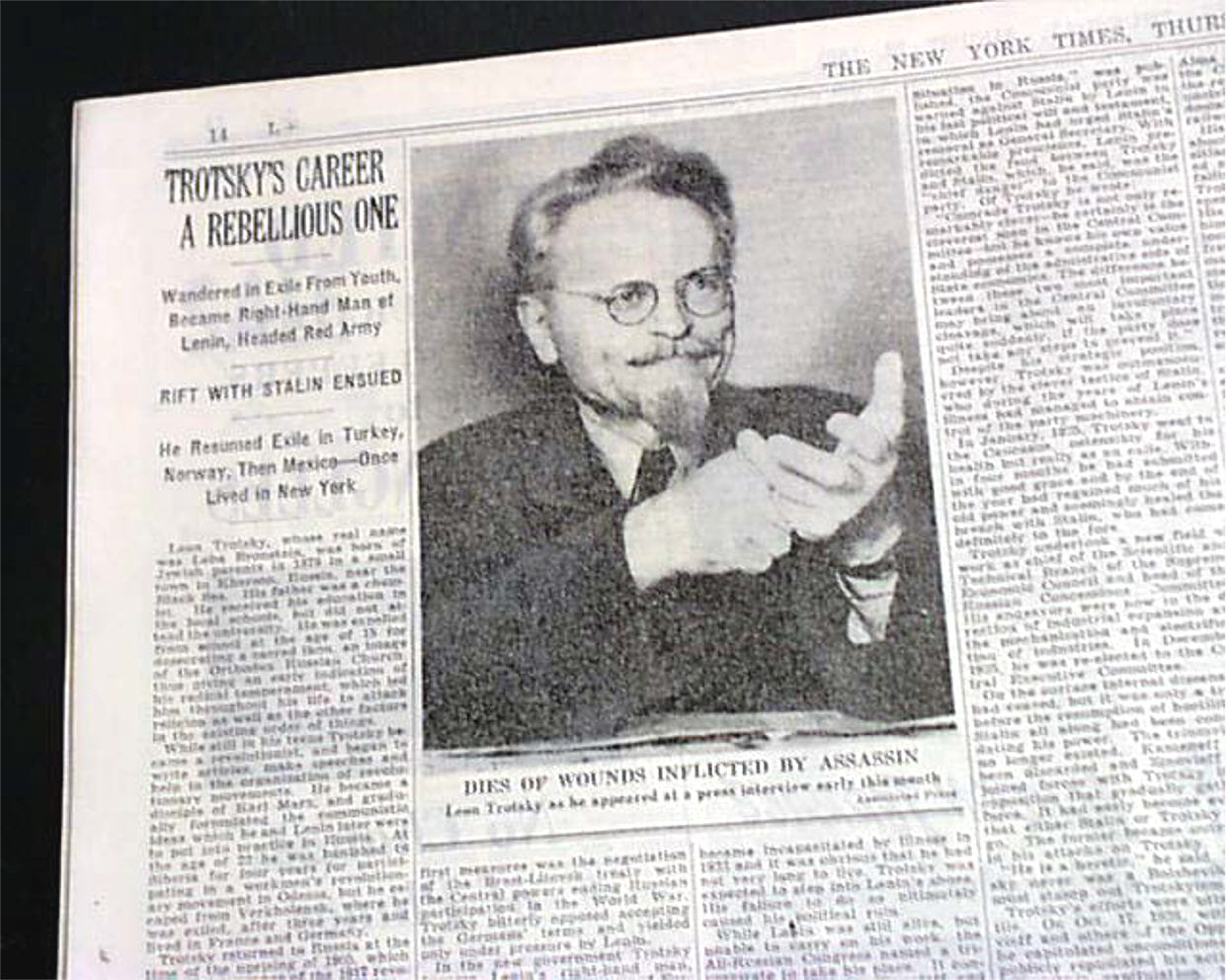 The New York Times, August 22, 1940. This article continues from the front page and is mostly an account of his life. Source: Timothy Hughes Rare and Early Newspapers

Reports (not always the main headline) can also be found in, for example, Cleveland News in the US, Le Matin in France and The Ottawa Journal in Canada. The US weekly [The Nation] 9 published an excerpt on Sept. 7 from an upcoming biography by Louis Fischer detailing the rivalry between Stalin and Trotsky. In it, Fischer wrote that Trotsky was

brilliant, fiery, magnetic, and a great Intellect. But he was a Glbraltar without a hinterland, a dreadnought sailing the seas without escort.

In Australia, The Sydney Morning Herald printed the story of Trotsky's assassination in its 22nd August edition. More interestingly, it cited A.P.P. in New York (21st Aug.) in a small paragraph under the main article, mentioning the Mexican painter Diego Rivera linking the (then) attempted assassination to Stalin and Hitler. Rivera

...alleged the hand of Stalin, directed through Hitler, was responsible for the attempted assassination of Trotsky.

Trotsky had lived with Rivera, and the painter had helped get permission from the Mexican government for the Soviet exile to settle there. Rivera himself had been strongly advised to leave the Soviet Union in 1928 after criticizing Stalin.

In the UK, The Guardian (or Manchester Guardian as it then was - thanks to Zeus for pointing this out) reported the facts of the murder in its 22nd of August paper (although the name of the assassin was still an alias, Franck Johnson). In another newspaper,

The London Times editorial on 23 August summarized a less positive mood at the time: ‘The murder of Leon Trotsky at Mexico City will relieve the Kremlin of not a few anxieties and will draw few tears from the majority of mankind.’

Churchill, who had become Prime Minister in May 1940, is unlikley to have mourned Trotsky as he

...hated Trotsky even more than Stalin did...

This is evident from a 1938 meeting with the Soviet ambassador:

“I hate Trotsky!” Winston Churchill told the Soviet Ambassador in 1938. “It’s a very good thing that Stalin has got even with him.”

and Churchill also mentioned his dislike of Trotsky in parliament in 1944.

In the Soviet Union, the official paper Pravda was unstinting in its criticism of Trotsky

The Kremlin was jubilant; Pravda announced the demise of ‘an international spy’...Trotsky...had fought for the interests of the tsar, landlords and capitalists.... he had worked as an agent of foreign intelligence services...

According to Service, the Pravda text was edited Stalin himself and

Official communist parties followed the line established in Moscow, drawing up their sentiments and phrasings from the Soviet central well.

The Kremlin, of course, denied any involvement, and the assassin (Ramón Mercader) also denied any connection to the Soviets. In Mexico, though, the 'scene' of the crime,

Trotsky’s corpse was laid out in an open coffin and the hearse was driven slowly through the central streets of Mexico City. Although the deceased had been a militant atheist, 200,000 people – mostly practising Catholics – stood on the pavements to pay their respects or out of curiosity. 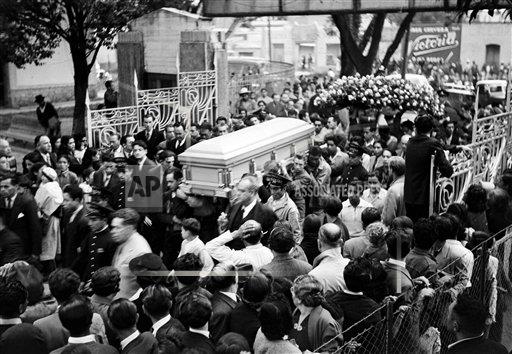 "The casket containing the body of Leon Trotsky, slain exiled Russian leader, is shown as it was carried through a crowded Mexico City Street, Aug. 22, 1940. Trotsky's body was returned to the funeral parlor as burial had not yet been arranged. (AP Photo)". Text & Image source: AP Images.

Footage of the funeral can be seen here: 1940 Trotsky Funeral (Silent).

Trotskyists spoke about the deceased as if he had been the greatest man of his time. They declared that there had been nobody like him since Lenin. They tried to amplify publicity for the cause by conveying Trotsky’s body to the United States. The US State Department rejected the request: the American authorities were not going to abet mourners in spreading any kind of communism.

The refusal to admit Trotsky's body was mentioned by the American Trotskyist James P. Cannon, in a memorial address a week after the assassination. He presented his (unsurprisingly scathing) view of the 'capitalist' reaction:

The capitalists - all kinds - fear and hate even his dead body! The doors of our great democracy are open to many political refugees, of course. All sorts of reactionaries; democratic scoundrels who betrayed and deserted their people; monarchists and even fascists - they have all been welcomed in New York harbor. But not even the dead body of the friend of the oppressed could find asylum here!

The great and powerful democracy of Roosevelt and [Secretary of State Cordell] Hull wouldn't let us bring his body here for the funeral.

Later, in late 1941, the American State Department opposed the publication of Trotsky's biography of Stalin for political reasons:

“It [Trotsky’s Stalin] was printed by its publisher, Harper and Brothers, but withdrawn by them prior to public sale late in 1941”, writes Frank C. Hanighen, feature writer for La Follette’s Progressive in the 1st May 1944 issue. “The publishers gave as the reason for withdrawal ‘a concern for the work’s adverse effect on international relations’ says Mrs Lombard…”

“One member of Congress was asked not to let the book get out of his hands nor permit it to be examined by any other person … State Department officials have made informal suggestions that any quotation from the book would be harmful to Soviet-American relations…” explained Frank Hanighen. (Reprinted from the British Socialist Appeal, August 1944).

Only in 1946, after Britain and the United States had fallen out with Stalin, did the book finally appear.

In Britain, Esperantist and revolutionary socialist Frank Maitland, when presenting himself to the tribunal examining conscientious objectors on 22nd of August, was asked to which party he belonged:

...he replied ‘the Fourth International of Leon Trotsky’. ‘But isn’t Trotsky dead?’, asked a member of the tribunal. ‘Yes’, Frank shot back, ‘but he is still the leader of our party.’

For most countries, World War II was undoubtedly a major distraction:

The attention accorded to Trotsky might have been greater if Europe and the Far East had not been theatres of war. Armies were on the march. Germany and Japan were pursuing their wars of territorial expansion. The political map of the world was being redrawn almost daily. Trotsky’s assassination was never going to keep most people’s attention for more than a few days.

Not the answer you're looking for? Browse other questions tagged soviet-union stalin assassination trotskyism or ask your own question.