What is the original variant of the “Charles V Dominating Fury” statue?

The statue "Charles V Dominating Fury" by Leone Leoni is known in two variants, in one the emperor is naked, in the other he is armoured. I wonder which variant is the original? 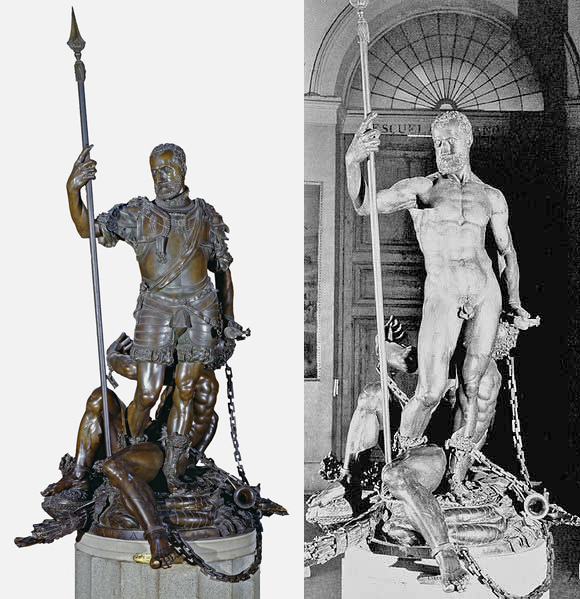 It's the same statue, the armour is removable.

The statue is today kept at the Museo Nacional Del Prado:

The Emperor stands over a nude figure representing Fury, which takes the form of a mature man in chains with an angry and hateful expression. Fury holds a lit torch in his right hand. The group rests on a base covered with arms and military trophies, crafted with a goldsmith’s attention to detail: a trident, a trompet, a mace, a quiver and even a lictor’s fasces with its hatchet, emphasize this group’s similarity to a work from Antiquity.

This idea is related to the Renassance mentality, which associated imperial power with the Roman past in both a political and an esthetic sense. In keeping with this tendency, the artists represent the emperor nude here, as in an ancient sculpture. To this, they added the armor, which can still be removed today.

5
Which figure is this a statue of?
16
Please help find these paintings
2
Earliest use of Renaissance Era innovations in Islamic countries & culture?
32
What is the date and original source of this medieval picture?
1
In the painting “Ariadne”, by Arthur Streeton, why are the sails of the ship white?
4
Are there the depictions of horsemen in Roman republic other than on the coins?
4
Is this costume plate from Theatrum Orbis Terrarum correctly colored?
8
What is the original source of this 16th century image of a French town holiday with musicians in a tree?
23
Who are these red flag worshipers from these early maps?