Where did tree spiking prevent the most logging?

Old growth trees can be very valuable as lumber. Tree spiking, a form of ecotage or monkeywrenching, is driving a metal or ceramic rod into a living tree. This discourages logging by marking trees or stands as dangerous to cut and mill. 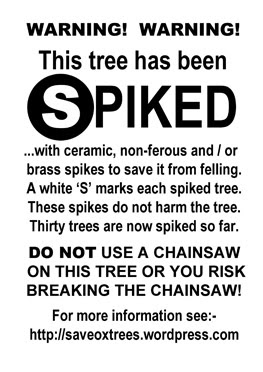 Although it is sometimes possible to remove the spikes, spiking has deterred logging: "prudence directs that in most cases spiked trees be left alone". For example, in 1982, some 2000 trees at the Grouse Mountain Ski Resort in North Vancouver, British Columbia, Canada were reportedly not logged after being spiked.

In terms of the number of trees left standing, what was the largest single logging project derailed by spiking?

Question: Where did tree spiking prevent the most logging?

Short Answer:
Tree Spiking was most effective in Virginia's George Washington National Forest, and in the Wanatchee Forest's Icicle River drainage in Washington state, or where Logging wasn't a major part of the local economy. These are the only two places where tree spiking actually interrupted for a time lumber sales. Where logging was a major factor in the local economy tree spiking proved to be ineffective deterent to logging after it's initial introduction.

The Secret History of Tree Spiking
Even unabashed Earth First! apologist Chris Manes, writing in his well researched book Green Rage, could only come up with two timber sales that were canceled because they were spiked, one in George Washington National Forest in Virginia, and one in the Wanatchee Forest's Icicle River drainage in Washington state. I don't know about the trees in Virginia, but the Icicle River sale has since been cut.

Detailed Answer:
Tree spiking which is believed to have originated in the United States in the early 1980's spread out to several countries, including Canada, and New Zealand. While initially it caused some casualties,

Tree Spiking
In 1987, California mill worker George Alexander was seriously injured when the bandsaw he was operating hit an 11-inch spike embedded in a 12-inch trunk with a worn-out blade he had earlier requested to be replaced.

It was ineffective because once allerted the the problem it was easy enough for the lumber industry or Forest Service to dispatch workers with metal detectors to remove spikes from the trees. Even when spikes have been missed the lumber industry ultimately chalks it up to the cost of doing business.

The Secret History of Tree Spiking
there have been scores and scores of tree-spikings, and in the vast majority of cases, the Forest Service or timber company just sent people in with metal detectors and, often with great public fanfare, removed the spikes and cut the trees. Sometimes spikes were missed and sometimes they hit the blades in sawmills. But the timber industry has made it quite clear that this is a price they are willing to pay.

from AaronBrick, Do mills simply expect to put their employees in danger and break their saw blades by cutting through ceramic spikes that their metal detectors could not locate?

This Dec 2019 Newspaper Article quotes the United States Bureau of Labor Statistics listing Logging as the most dangerous job in the United States. Sites fatalities coming from loggers being struck by flying debree and equipment failure. So I would say.. pretty much yes, Logging is a dangerous job and Mills put their employees at risk. Found statistics from other years where Logging was top 2 for other years too. It's not only spikes which cause saw blades/chains to break. dense wood(knots) or the weight of the wood can also pinch the blade and cause it break. The net result is the same. loggers can be put in danger when their equipment breaks.

Not the answer you're looking for? Browse other questions tagged crime forestry or ask your own question.

5
Where can I find more information about this use of Yakuza against a demonstration in 1960?
4
Did collective punishment of families occur during the French Revolution?
3
How did a criminal trial in the Soviet Union work after World War 2?
15
When did mature redwood trees become possible to harvest?
1
Did Europe experience forest deficits prior to 19th century?
1
How did one look for missing people in the 19th century?