What flag is similar to the American flag, but has only 9 stars and 13 vertical stripes? [closed]

I saw a flag walking around my neighborhood similar to an American flag but I don't recognize it. It had nine white stars in a grid on a blue background in the top left corner, the rest of the flag was taken up by thirteen red and white alternating vertical stripes. What is this?

I'd like to know what the history behind this particular rendition of the flag is, I've done some research, but I'm not a historian and am not sure where to start. It's possible this is a one-off that this person saw somewhere and decided to fly outside his house, but if not it'd be nice to know what he's attempting to signify with the flag.

I don't know what it is. But I can tell you what it isn't.

This doesn't appear to be any US city, state, governor, nor county flag.

However, those lists are not exhaustive. Check the flags of local government.

It's not likely a historical Confederate States of America (CSA) flag, CSA flags usually, but not always, have three stripes. It could be a modern amalgamation.

Nine stars brings to mind the flags of the early US confederacy, but they only had three stripes and the stars were in a ring. 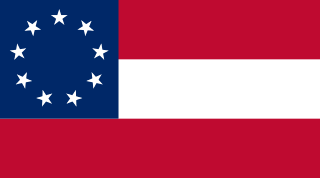 CSS Curlew used nine stars in a grid as their naval ensign, but again, only three stripes. 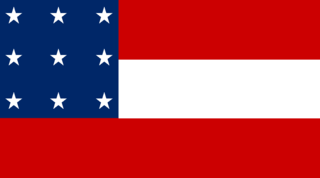 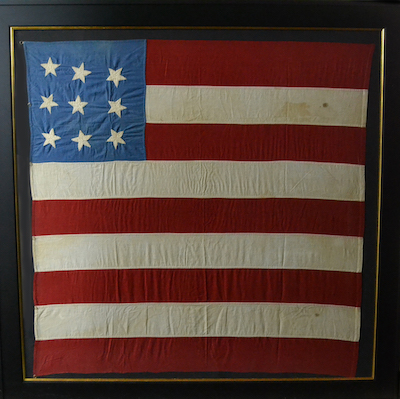 There’s never been a time where nine stripes and thirteen stars would have been official, yet often on antique pieces of folk art and artwork, especially very small pieces, the creator might omit stars simply out of necessity due to lack of space. I’ve seen this often on small maritime paintings where the artist was unable to put the full complement of stars on a ship’s flag. Ship flags from the 19th century, and up until the early 20th century, also known as ensigns, commonly featured cantons of 13 stars. This was so that the canton was more recognizable at long distances. Most likely, on the carved ship you describe, the maker attempted to approximate a 13 star ensign. There are printed parade flags that date from the Civil War and Centennial Era that also feature less than 13 stars. Those that surface typically feature star counts of 7, 8 or 9 stars. While some collectors believe that these are prototype confederate flags, or confederate sympathizer flags, they are typically very small and while it may be plausible that they were made by southern sympathizers, I personally believe that the makers of these flags simply opted to print fewer stars to make them look bolder rather than printing the full complement of 13 stars, which might not look as striking.

Despite being marked by the seller as a CSA flag, I feel this teeny little 9-star (circular formation, one in the center) 13-stripe flag matches that description. 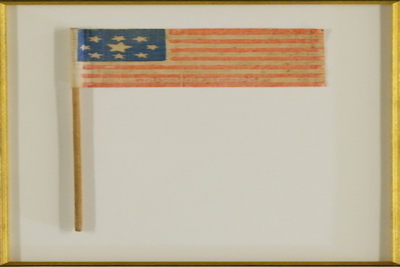 Here is a link to the flag of the United States Coast Guard, which does not look anything like your description.

But here is a link to the ensign of the United States Coast Guard, flown by its ships:

The flag of the Customs Service was designed in 1799 by Secretary of the Treasury Oliver Wolcott, Jr. and consists of 16 vertical red and white stripes with a coat of arms depicted in blue on the white canton. The original design had the Customs Service seal that was an eagle with three arrows in his left talon, an olive branch in his right and surrounded by an arc of 13 stars. In 1951, this was changed to the eagle depicted on the Great Seal of the United States.

Its actual name is the Revenue Ensign, as it was flown by ships of the Revenue Cutter Service, later the Coast Guard, and at customs houses.

In 1910, President William Howard Taft issued an order to add an emblem to the flag flown by ships from the one flown on land at customs houses. The version with the badge continues to be flown by Coast Guard vessels. Until 2003, the land version was flown at all United States ports of entry.3 The renamed CBP Ensign is currently flown at CBP's headquarters in Washington, D.C., at its Field Offices, overseas duty locations including preclearance ports, and at all land, air, and sea ports of entry.

There is also the urban legend of the civil flag or civilian flag of the USA which is supposed to look like this:

And those are all the flags I can think of which resemble the US flag but have vertical stripes.

Not the answer you're looking for? Browse other questions tagged flags or ask your own question.

15
Why did Kabila discard the name and flag of Zaire?
4
What do the four castles on the flag of Ibiza represent?
7
What is the history behind the stripes on the East India Company's flag?
14
What is the flag in this 17th century painting?
51
If the Union Jack joins the flag of England and Scotland, why does it have a different shade of blue than the Scottish flag?
8
Did the 49 star USA flag see significant adoption by the American public?
16
Flag with 13 white stars and a crescent on red background
10
Can anyone explain why the Scottish flag on this map from 1504 has a red cross on a white background?
4
Are the Swiss flag and the flag/coat of arms of Piedmont related?