Why did Sweden not fortify Swedish Livonia along its eastern frontier, including the approaches to Riga?

Swedish Livonia was a province created from territories that were ceded by the Commonwealth in 1629. This territory remained under de facto Swedish rule until 1710 and was ceded formally in 1721. Parts of this territory (which evidenced changes in borders) were inherited from Denmark after Brömsebro. What I am wondering about is whether the Swedes during this time discussed the proper fortification of this frontier with Russia—both Finland, Ingermanland, and Estonia were far better fortified towards the east while I have not seen any proof that similar plans were carried out in Swedish Livonia.

For a better rephrasing of my question: Did the Swedish seriously consider (i.e., try to allocate money, get proposals passed in the Riksdag, etc) the benefits of fortifying Swedish Livonia, especially in the south and east? Why did they not fortify these frontiers, including the approaches to Riga? 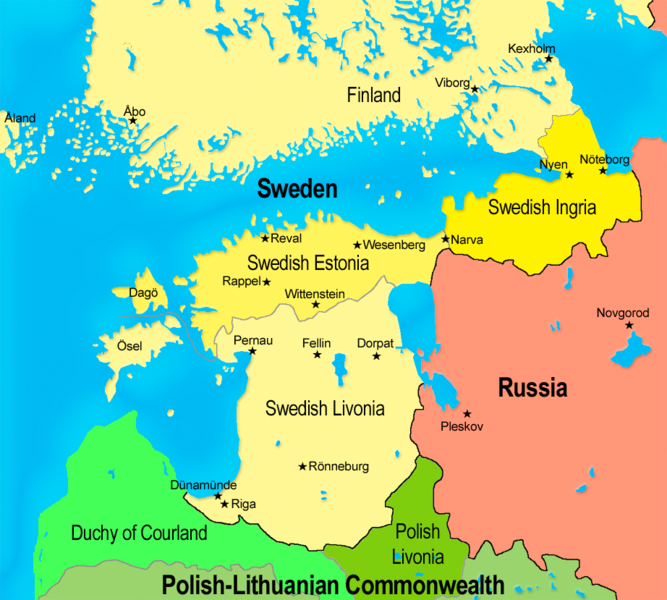 As a comparison, Swedish Finland was defended by Vyborg and Kexholm which were modernized during the 17th century. Swedish Ingria was defended by Nyenskans and Nöteborg. Swedish Estonia's Reval and Narva were both refortified during the 17th century (with Narva later acting as the capital of Ingermanland). In Livonia, Sweden refortified Pernau and Dorpat—in the north of the province—as well as built a system of bastions around Riga, along with an additional fort in the mouth of the Daugava (Neumünde). Further, the Swedes inherited Arensburg which the Danish had modernized into a baston-fortress during their rule.

Instinctively, these moves in Livonia don't make much sense: the Baltic Sea side was heavily defended while the inland parts were not. The Swedish fleet was, at the time, one of the primary forces on the Baltic Sea as well (with no Russian competition, but the Commonwealth, Denmark, and some German principalities acting as the other forces). The defensive value of Dorpat for example in this time should have been relatively small (despite Gustav Adolf founding an university in this town, it looks as if the mercantile importance of the town was rather on the decrease in this time).

Riga was (depending on the sources) either the largest or the second-largest town in Sweden. Yet, it's defense—especially coming downstream the Daugava—seems to have been left only to the city's own defenses. It is perhaps notable that Imperial Russia later built impressive fortifications in Daugavpils as well as modernized Riga's defenses even more.

Rönneburg which is described on the above map was rebuilt as a town during Swedish times, but the fortifications were actually disbanded. Neuhausen seems to have formed an important part of the defense of the eastern frontier, but there are no notices of the area's defenses being improved during this time period that I've found though the old Medieval castle was besieged and taken numerous times by the Poles, Russians, and Swedes during the 17th century wars.

The article on Neumünde mentions a military map from 1653 which could be helpful but there are no links to it:

By 1653 a map issued by Swedish Military council showed that the Dünamünde fortress was destroyed and the Daugavgrīva castle was in ruins.

Also, to cover all bases, prior to Swedish rule the Polish re-used old Medieval castles as the centres of their starostships and vojvodships. The map on that link mentions numerous towns, none of which in the Wenden vojvodship were (seemingly) fortified by the Swedish. Moreover, many previous frontier-castles, like Marienhausen, were allowed to lapse during this time. While the English article describes how it was destroyed in 1702, the Estonian one goes further to not note any constructions during the Swedish period.

The above is perhaps especially notable as in the Russo-Swedish War (1656–1658) the Russians managed to overrun the dilapidated defenses of Daugavpils and Kokenhusen, and were only stopped at Riga which was partially modernised. They had clearly been coming down the route of the Daugava. Yet, even after this war, there is nothing apparent that would demonstrate Sweden considering defensive upgrades in the east of Swedish Livonia.

@TomAU's answer made me investigate another avenue. Erik Dahlbergh, the Swedish Vauban, is described in his Estonian WP article to have promoted the greater fortification of the eastern border but was overruled by Karl XI who wanted the Danish border secured—but this is unsourced. It adds that Karl XII approved the further fortification of the east (without details as to where and what) but there wasn't enough time for this before the start of the Great Northern War.

The apparent cause was Sweden's transition into the Swedish Empire or "Great Power" phase beginning in 1611, during which Sweden shifted from a defensive to offensive posture, one that was not entirely under her control.

The earlier fortresses (those begun before 1611) were built along the seacoasts, and intended to protect Sweden's share of the Baltic maritime trade. Indirectly, this protected Sweden's military interests as well. Although Riga was an important "standalone" city, it was at the edge of Swedish holdings, and the loss of that city was less of an existential threat than say the loss of Narva or Tallinn (Estonia), which connected Sweden to the southern shores of the Baltic.

Ironically, the Empire period began (in 1611) with a defeat by Denmark that impoverished Sweden by forcing her to pay reparations for several years, until 1619. This caused the young King, Gustav Adolphus to rebuild the Swedish army (but not its fortresses), and wage an ultimately successful war against Poland. Later, he stepped into the breach on the Protestant side of the 30 Years' War after the defeat of Denmark by Catholic forces. Gustavus Adolphus won a series of spectacular, but short-lived victories, ending in his death in in 1632 (aged 37).

The next four reigns were a regency for his 6 year old daughter Christina (1632-1644), the reign of young Christina herself (from 1644-1654, aged 18 to 28), and Christina's cousin Charles X (1654-1660), and another regency for Charles X's minor son, Charles XI, from 1660-1675. During this time, Sweden won a favorable peace in the 30 Years' War, and enjoyed other military and diplomatic triumphs, but operated largely at the behest of a much more powerful ally, France, and on the basis of French financial subsidies, rather than under Sweden's own power.

In my comment to this question, I estimated that Sweden's GDP was only 8% the size of France, meaning that if it was playing in the same "league," it was clearly "punching above its weight." More to the point, Sweden's ties to France directed its military and foreign policy to the west, away from Russia, and toward Denmark and Germany.

During the period of peace in Charles XI's last years, rebuilding efforts were directed at Sweden's navy, not its army or land fortifications, underscoring the importance of the northern Baltic ports. More to the point, the offensive and western military orientations continued under the Charles XII, the last king of the Swedish Empire (reigned 1697-1718). Fighting on several fronts, he prioritized campaigns against, Denmark, Poland, and German Saxony, letting Russia ravage his eastern holdings, before launching an unsuccessful counter-invasion of Russia.

Not the answer you're looking for? Browse other questions tagged sweden latvia or ask your own question.

5
How much did it cost to maintain Gustavus Adolphus' army? How much of it was paid by Richelieu?

16
How and why did Charles XII get to Poltava?
6
Why was Poland able to resist the Swedish invasion during the Deluge, but not during the time of Charles XII?
9
Were the Swedish holdings in northern Germany accepting or resentful of their overlord after the Peace of Westphalia?
8
Through what developments did Sweden end up in war in northern Africa in early 1800's?
12
Did the Russian Empire have a claim to Sweden? Was there ever a time where they could have pursued it?
1
How did the Swedes integrate Geats, Danes, Walloons, Finns & others?
3
How did Pontus de la Gardie drown?
8
Did the Soviet Union's successful northern campaign have an impact on Swedish iron ore shipments to Germany?
5
Did people living in Stockholm, Sweden in the late 1700s (18th century) really have to fetch their mail manually?