Did most citizens of the British Empire hold racists views before the post-war period? [closed]

Ask Question
Asked 7 months ago
Active 7 months ago
Viewed 141 times
0
Closed. This question is opinion-based. It is not currently accepting answers.

Racism during Imperial Britain has come back to the fore with the recent protests in the US and UK, in relation to the death of George Floyd. In particular, Churchill has been alleged as racists, and by modern standards, that seems to be an accurate description (without this implying a value judgment in itself).

Since the beginning of the slave trade and the entrance of black individuals into the British society, as well as the British conquest of India (17 century, roughly), and until the end of the Second World War (roughly coinciding with the declaration of Human Rights by the UN and the exposure of Nazi's institutional racism), is there any statistic or evidence that "most of individuals" held racists views, either against blacks, Indians, or other non-white races?

The Wikipedia article about racism in the UK is only descriptive, presenting no statistics about the spread of racism. There seem to be a huge literature exploring racism in the UK. This article refers to "popular imperialism" (image building of the empire among citizens as a force of peace and civilization, thereby harboring some of the racists views of the elite), but says this cannot be directly associated to "popular racism". The article does not provide an attempt to measure it either. I have seen a few other papers but so far haven't found an attempt to quantify its spread, not even as a guesstimate. Rather than spending all my time looking for a needle in a haystack, I prefer to ask here.

Anyone can provide more information about this?

I think it unlikely that you'll find the answer you are looking for, at least as the question is currently framed. In a society where racist views are unchallenged (widely held or not), you are unlikely to find public opinion data to "measure" this. And without extensive polling at frequent intervals and with some geographic granularity, I'm not sure how you would hope to "quantify its spread", however you define "it", and can only hope to do so rather indirectly. In order to measure, you need a precise definition, which the question does not address.

That said, some of the most well-known evidence that racist imperial ideology was widely accepted in Victorian and pre-war society comes from advertising and popular culture. Here is an article that looks at ads for Pear's Soap, one of the more notorious sources of examples. This one is from 1884. It reflects an attitude that white skin is more desirable then dark skin, and may appeal to an assumption that black people are dirty. You can find many more examples like this. I don't mean to overstate how much this really tells us about people's awareness and attitudes about racism, but it clearly shows that racist ideas and images were not as offensive to the British public as they are today. 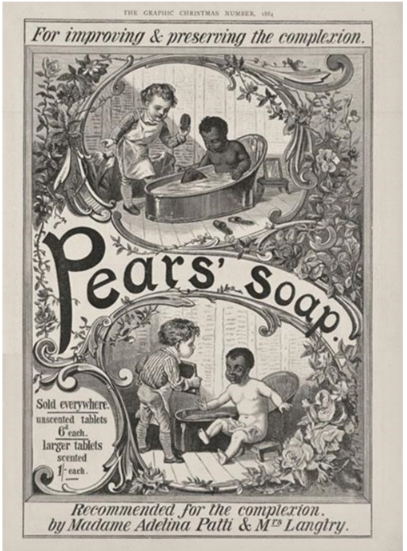 Not the answer you're looking for? Browse other questions tagged british-empire racism or ask your own question.