Was the M4 Sherman used frequently in artillery capacity?

I've heard the M4 Sherman had instruments on it that allowed it to act as an artillery piece. Is there any evidence to suggest this was effective?

I've heard that the Sherman had of course, its High Explosive ammunition which was mainly used in an infantry support role. However I've heard that it had the instruments on board (High quality radio, elevation/azimuth controls) that allowed it to act as an artillery piece. However I've yet to find any evidence as to how well this was used. Was it just something cheaply added on "just in case" but never really used or was it something that Shermans could oftentimes find themselves in use of?

For the purposes of this question, I will interpret "as artillery" to mean "indirect-fire". That is, they're firing at a location, not a target.

M4 hulls were used to make self-propelled artillery: M7 Priest, M12, and Sexton. They even played around with putting a whole bunch of rockets on an M4, but not in large numbers. And many M4 tanks were equipped with a 105mm howitzer for direct and indirect infantry support. 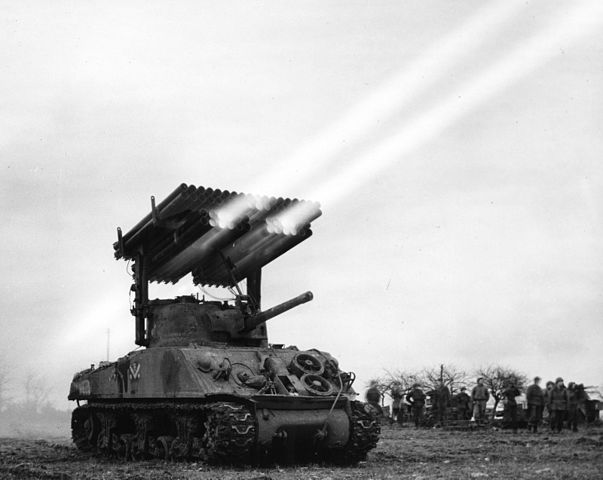 The M3 75 mm gun was a very good all-purpose gun with a good high-explosive and white-phosphorous/smoke shells. 75mm and 105mm Shermans were used as supplementary artillery. Regular Shermans would be equipped with azimuth and elevation indicators to be able to carry out indirect fire missions. Individual crews would be trained to work with artillery units; they generally wouldn't do their own spotting or targeting and instead carry out fire orders: this many rounds of that type in such-and-such a direction and elevation.

The Korean War would see more use of M4s as artillery.

Not the answer you're looking for? Browse other questions tagged world-war-two united-states war warfare tanks or ask your own question.

17
How frequently were homing pigeons used in the World Wars?
9
Was the Flakpanzer IV used against infantry? If not, what was?
23
Was Hiroshima targeted because its mountains would "rebound the explosion back into the city for more damage"?
13
Could Thomas Jefferson have ever heard Mozart's Symphony No. 40, KV. 550?
7
Did American colonists object to the protections of Catholicism in the Quebec Act?
42
In the Battle of the Coral Sea, how could two Japanese scouts grossly mis-identify two American ships?
4
What was the nature and extent of forced or coerced sterilization in Puerto Rico from the 1940s-1970s?