Did the Catholic Church ban adoption in the Middle Ages?

In the book Contours of the World Economy (2007), by Angus Maddison, it says:

The adoption of Christianity as a state religion in 380 AD led to basic changes in the nature of European marriage, inheritance, and kinship. The papacy imposed a pattern that differed substantially from what had prevailed earlier in Greece, Rome, and Egypt and differed dramatically from that which was to characterize the Islamic world. Marriage was to be strictly monogamous, with a ban on concubinage, adoption, divorce, and remarriage of widows or widowers. There was a prohibition on consanguineous marriage with siblings, ascendants, descendants, including first, second, and third cousins, or relatives of siblings by marriage. A papal decision in 385 AD imposed priestly celibacy.

The main purpose of these rules was to limit inheritance entitlements to close family members and to channel large amounts to the church which became a property owner on a huge scale. At the same time they broke down previous loyalties to clan, tribe, and caste, promoted individualism and accumulation, and reinforced the sense of belonging to a nation-state (see Goody 1983; Lal 2001).

Reading about adoption history we can read that among orphanages were set up by the Catholic Church in response to the many children left at the doors of churches and monasteries, a practice it later became institutionalised. On this respect, Wikipedia states:

Abandonment levels rose with the fall of the empire and many of the foundlings were left on the doorstep of the Church. Initially, the clergy reacted by drafting rules to govern the exposing, selling, and rearing of abandoned children. The Church's innovation, however, was the practice of oblation, whereby children were dedicated to lay life within monastic institutions and reared within a monastery. This created the first system in European history in which abandoned children did not have legal, social, or moral disadvantages. As a result, many of Europe's abandoned and orphaned children became alumni of the Church, which in turn took the role of adopter. Oblation marks the beginning of a shift toward institutionalization, eventually bringing about the establishment of the foundling hospital and orphanage.

I emphasised a phrase which might indicate an early discourage or prohibition of adoption (there is no reference to where such rules are contained). Maybe this is what the book above is mentioning.

Similar ideas are presented in this book: 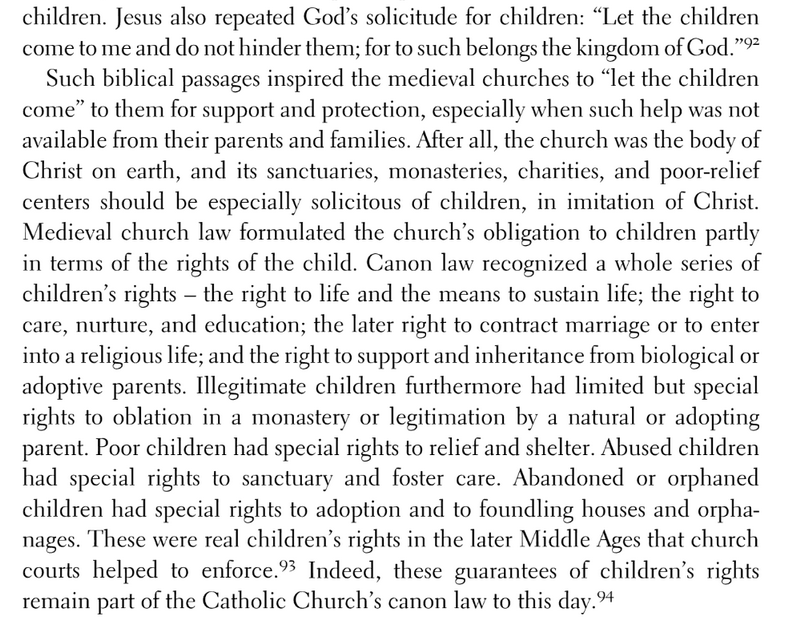 The later mentions in particular the issue of rights of children with adoptive parents.

So, statements about the issue are contradictory. ¿Does anyone have evidence for either case, perhaps a reference to medieval Church legal code?

Adoption was never banned, and in fact was only ever encouraged quite strongly.

First, though, your source is a little off the mark on some of its details:

Now, as for adoption, I’m not sure where this notion is coming from. Laypersons were always strongly encouraged to adopt. And, although members of the clergy do not themselves adopt, medieval monasteries were something akin to modern orphanages in that they took in orphaned youths (albeit mostly to enter them into religious service).

If anything, I would argue that an ever-increasing importance placed on kinship ties would serve to discourage adoption in itself, rather than the Church aiming to put pressure on social systems of inheritance; the argument as stated seems to be confusing cause and effect, in my view.

Not the answer you're looking for? Browse other questions tagged middle-ages catholic-church family or ask your own question.