The Biblical Myrrh resin is said to come from either Commiphora Myrrha or Commiphora Habessinica (Abyssinian). Which is it?

Here is a site talking about C. Myrrha which gives a good botanical description but fails to mention what color the flowers are (and how many petals they have), which is something I'm trying to find out. I can't find any photos of C. Myrrha flowers, and all I could find was this diagram (showing two white flowers labelled '2' for male and '3' for female.

This is currently not easy to decide. It may even be decidedly more than one species used when in the biblical text we read one word for 'myrrh'.

In different contexts different qualities seem to inform the usage of 'myrrh'. While most Commiphora species would produce 'something' to explain its application, some being a better fit than others, no definitive clues are given in the text. Other historical clues are equally inconclusive.

However, there seems to be a kind of consensus emerging, although very weak at its own base:

Your robes are all fragrant with myrrh, and aloes and cassia. Psalms 45:8 (RSV)

And when they were come into the house, they saw the young child with Mary his mother, and fell down, and worshipped him: and when they had opened their treasures, they presented unto him gifts; gold, and frankincense, and myrrh. Matthew 2:11 (KJV)

And going into the house they saw the child with Mary his mother, and they fell down and worshiped him. Then, opening their treasures, they offered him gifts, gold and frankincense and myrrh. Matthew 2:11 (RSV)

And when they went into the house they saw the young child with Mary its mother, and, falling down, they did obeisance to it. They also opened their treasures and presented it with gifts, gold and frankincense and myrrh. Matthew 2:11 (NWT)

But Zohary goes on to say, “Further investigation is required to confirm the identification.” (ZOH) Conveniently, this is alphabetically the first of 20 species (there are about 200 species in this confusing genus) covered by the USDA Nomenclature Database, until you change the orthography. Then, C. africana is first alphabetically. Neither Zohary nor I know which species is the myrrh of the Bible. But Zohary selected this one; in my first Bible book (BIB), I selected C. africana as bdellium and C. myrrha as myrrh, after wrestling with the long lists of candidates.

With a little lobbying input from my editorial assistants, I honed in on C. erythraea in my second Bible book (BI2). I am not embarrassed to side with Zohary’s selection of C. habessinica. After all, Zohary has lived most of his life and his career as a botanist in the Holy Land, and I have spent no more than a total of 6 weeks in the Holy Land (Egypt, Israel). Zohary notes that myrrh (of undetermined specific identity), most precious of the resins, is connected with both the birth and death of Jesus (ZOH). Because of its readiness to strike root from cuttings, many ethnic groups associate the tree and the myrrh with immortality.

But this has to be taken with a big grain of salt. This difficulty and surrounding 'controversy' is entirely expected. Taxonomy of plant species is not what it used to be. Definitions changed and change. This is similar to us often still confusing Ceylon-cinnamon and Cassia-cinnamon. They are both 'cinnamon' and very similar in application, taste, with a lay-person regularly unable to tell the difference.

It is therefore not guaranteed to ever get definitive identification of a bible plant called 'myrrh', not even between mentions in different 'books' within the book, if plants are so similar as these two (or more species) and sometimes similar in application, sometimes different. If we insist to shoehorn our modern definitions of 'species' into a system of drugs and commerce from thousands of years ago: The answer may as well be that be ask the question the wrong way.

Myrrh is the dried resin of several species of Commiphora (Burseraceae). These plants are shrubs or small trees of the arid and semiarid regions of East Africa, Arabia, and the Indian subcontinent. Incisions in the bark allow the resin to exude. When the resin is dry, it is collected and sold. All species are not used for the same purpose: some are used medicinally (Leung and Foster 1996) and others are valued for their fragrance (Calkin and Jellinek 1992). Recent work indicates that C. myrrha has opiate qualities (Dolara et al. 1996). This feature helps to interpret a New Testament reference: “And they tried to give Him wine mixed with myrrh; but He did not take it”.(Mark 15:23, NASB)

The two different myrrhs, medicinal and fragrant, are both translated from the same Hebrew word, mor. The scented myrrh is probably Commiphora guidottii (Thulin and Claeson 1991). Odor of myrrh permeates the pages of Solomon’s writings, with more references by him than any other Bible author. Song of Solomon has seven references.
— Lytton John Musselman: "Figs, Dates, Laurel, and Myrrh. Plants of the Bible and the Quran", Timber Press: Portland, 2007.

Myrrh is the resin collected from species of Commiphora, a genus of trees and shrubs of the Burseraceae growing in arid and semi-arid regions of North Africa, Arabia, and the Indian subcontinent. These are usually armed with thorns and spines and all contain a milky sap known botanically as a latex owing to its milklike color, which dries into a translucent resin. Like other resins, myrrh contains both volatile and nonvolatile elements and is soluble in lipids (contra gums, which are soluble in water; Langenheim, 2003).

Two types of myrrh have historically been recognized. At their simplest, these can be considered liquid and solid myrrh. The first exudes naturally from the tree and is considered the most precious because it contains a greater percentage of volatile substances and therefore is more fragrant. This is likely the product indicated by “stacte” in the Bible and chiefly collected from C. guidotti (Thulin and Claeson, 1991). Pliny also refers to the oozing resin as stacte. Other species produce solid myrrh, used chiefly for incense and medicine.

Less clear is the use of the myrrh dissolved in wine offered to Jesus on the cross: “And they offered him wine mixed with myrrh, but he did not take it” Mark 15:23 (ESV). This seems puzzling, until it is realized that myrrh was commonly put in wine probably as a preservative and perhaps used as much for this as for incense and perfume.

Why this mixture should have been administered to the suffering man on the cross has been debated. Koskenniemi et al. (2005) conclude that this was a form of torture because it would increase thirst. Just a verse before, Jesus had uttered, “I thirst.”

That myrrh was used to flavor wine is well documented (Koskenniemi et al., 2005), but the amount is uncertain. According to Broshi (1984), such wine was among the choicest. Dissolving 1/2 teaspoon (∼2.0 grams) in 1 cup (∼240 milliliters) of red wine makes a pleasantly bitter drink. It seems unlikely that the executioners would expend a valuable item like myrrh on their victim. Though we can only postulate the reason for the wine mingled with myrrh, it seems most likely that it was simply a medicament.

Examples of fragrant myrrh are the perfumed bed of the harlot in Proverbs 7:17 and the references in Song of Solomon (5:5, 13), the latter alluding to liquid myrrh. There is considerable confusion in the literature regarding liquid myrrh. As noted, it could be the liquid found in the fresh exudates with a higher percentage of volatiles. Most probable is the preparation of myrrh by dissolving it in a lipid, in most cases, a vegetable oil. This can be prepared as follows: 40 grams (1.4 ounces) of powdered myrrh is heated with 235 milliliters (1 cup) of oil, to which an equal amount of water is added. After the water boils for two minutes, the oil is decanted (Musselman, unpublished).

Myrrh was an essential material in funeral practices to maintain the quality of the air (Caseau, 2007).

Considering the high value placed on myrrh for medicine may elucidate why the magi included it with gold and frankincense for the child Jesus.

Since the plant description seem of interest:

Mor is justly translated 'myrrh', which is identical with the species of Commiphora abyssinica; although other species of this genus may well also have been included in the biblical mor.

This species and a few similar ones are native to Arabia, Ethiopia and Somaliland. They are all thorny, branched shrubs or small trees growing on rocky ground. Their small leaves have three ovate leaflets and their fruit is similar to a small olive. The fragrant stems and branches exude drops of oily resin spontaneously, but when they are incised, the resin flows more heavily. It eventually solidifies.
— Michael Zohary: "Plants of the Bible. A Complete Handbook", Cambridge University Press: Cambridge, New York, 1983.

The flowers of Commiphora abyssinica: 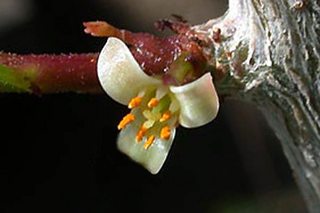 But notice that the number of petals as well as the exact name used in different sources might give one headaches: 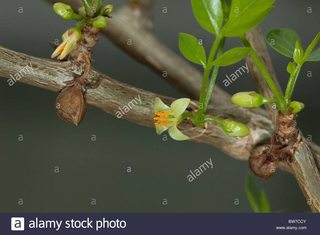 — Abyssinian Myrrh (Commiphora abyssinica, Commiphora myrrha), twig with flowers and fruits of previous year. - Image ID: BW7CCY — just lumping both together, as they are just too similar… 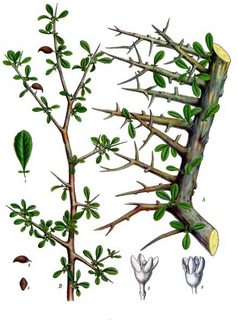 Some background on habitat and taxonomy via phenotype and genetics, not solving the riddle at all, but illustrating the inherent difficulties:

Today, the exact species is often of quite secondary importance as well. We see some non-Western ('indigenous') medical systems classify entirely different species (according to our Linnè-system) into the same category, based on the qualities they identified and deemed important. A 'procedure' or effect also seen similarly as recently in systems of Western medicine, or military, which considered lemons and limes to be practically the same.

The chemical differences of the allegedly different and identifiable species is for example found in this paper:

According to KewScience, where a few pictures of these in their herbarium are available, the two species in question are described as follows:

Not the answer you're looking for? Browse other questions tagged identification bible or ask your own question.

12
What was the world population around 970 BC? Does it fit the biblical narrative?
17
Are there non-Biblical references to collecting foreskins?
3
What was the relation between the biblical king Herod and the Parthian king Orodes II?
18
What ship is this and which military campaign?